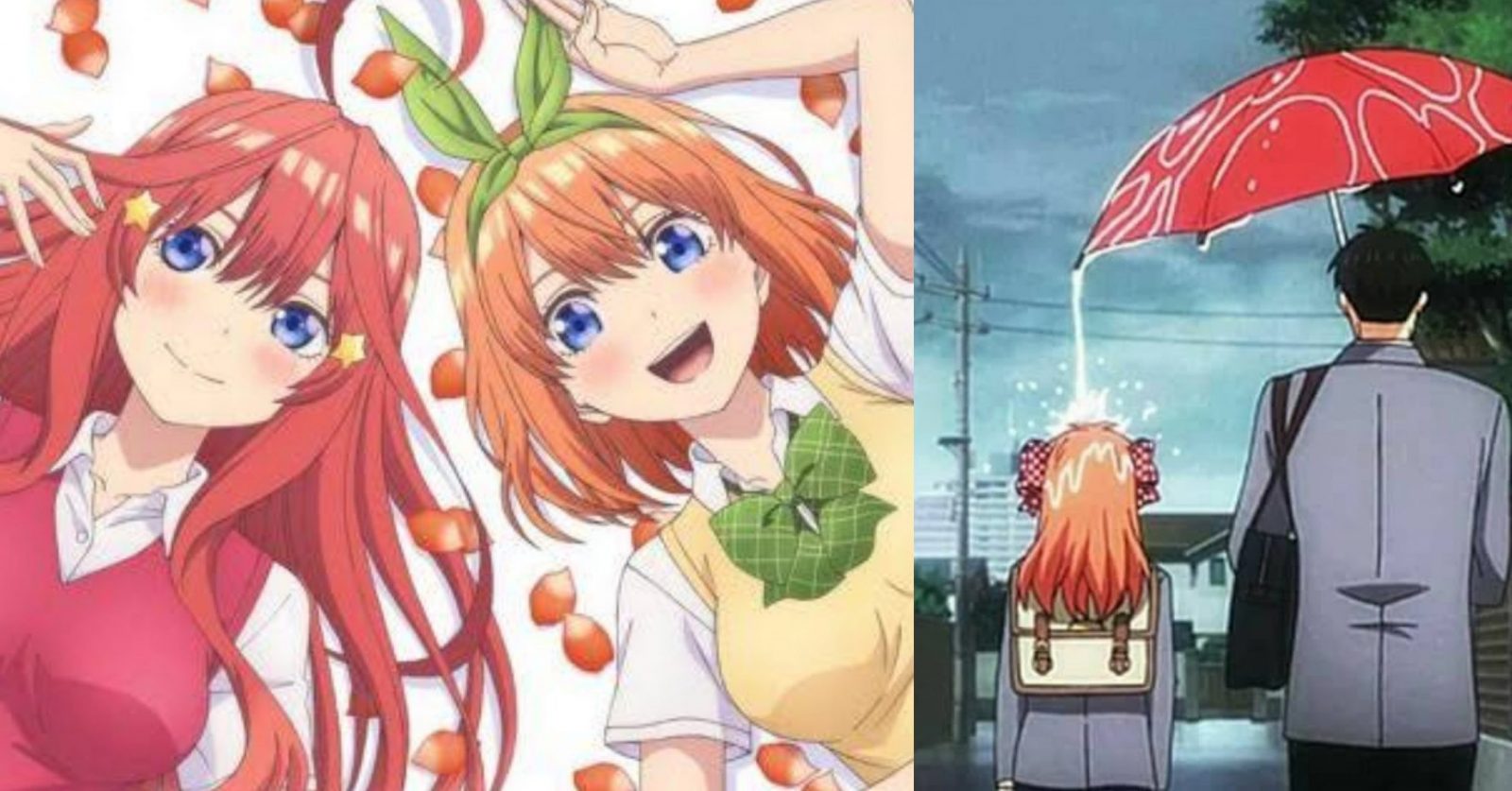 To be surrounded by five cute girls is indeed the dream. But, what makes Quintessential Quintuplets an adorable anime is the wholesome romance along with many rib-tickling moments. The anime in itself was a fantasy let loose in the minds of the viewers. This harem anime series covers the life of the genius student, Fuutaro Uesugi. The Top student of the school is known not just for his academics but also for his friendless-ness. He comes across a transfer student, with whom he ends up having a conflict with. Later introduced as Itsuki Nakano, Fuutaro immediately takes a disliking towards her.

When Fuutaro’s father sinks into debt, Fuutaro is offered a golden opportunity. In return for tutoring a wealthy client’s daughter, he is offered about five times more money than an ordinary tutorial. On reaching the venue, he realizes that the student he has to tutor is none other than Itsuki Nakano.

However, the real story begins when he finds out that Isuki has four more sisters as they are quintuplets. The anime follows Fuutaro’s chain of events as he tries to tutor these girls who only want to slack off.

If you have watched this anime series and liked it, you should definitely check out these ten anime like Quintessential Quintuplets that will definitely be worth your time. 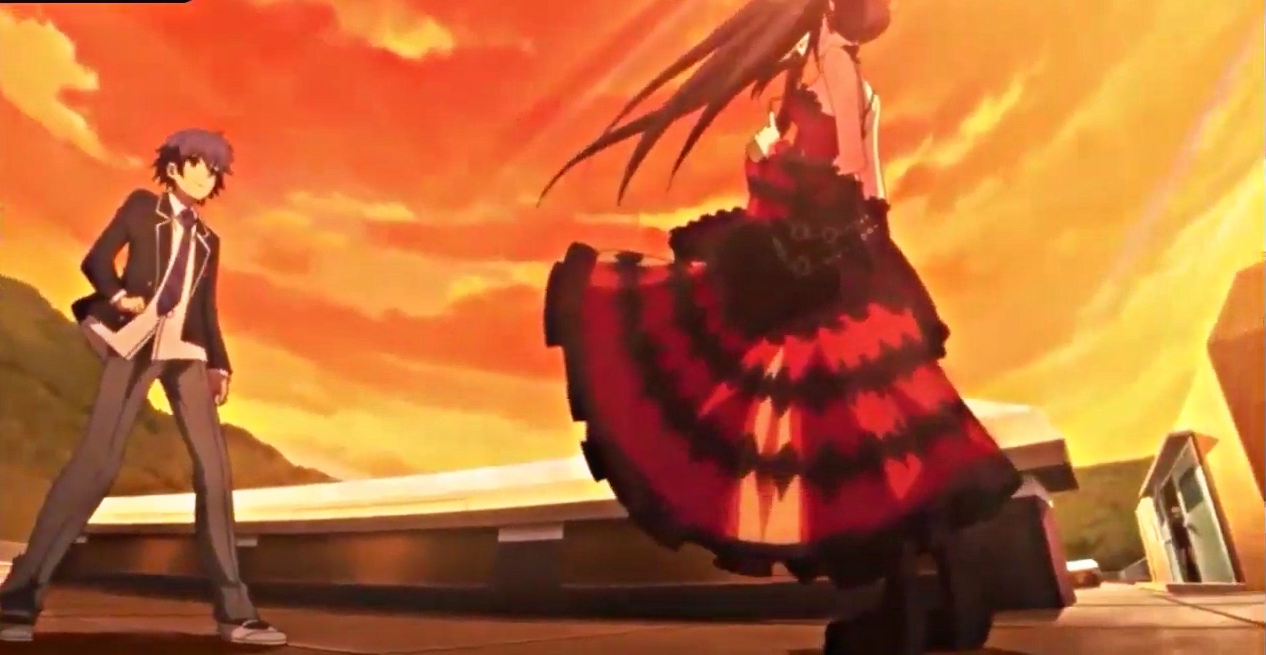 Wherever you need me to go, I’ll follow. – Shidou Itsuka.

Date A Live is a fantasy anime series about Shidou Itsuka and his journey to save both, the spirits as well as the human world. After a massive earthquake that kills millions of people, the world starts to experience frequent lighter tremors. Itsuka finds himself in the heart of these tremors, where he finds a spirit. After some series of events, Itsuka is caught between the conflicts of the spirit and an Anti Spirit Team, who believe that these spirits are a threat to humanity.

However, Ratatoskr, another group of individuals places a solution to this conflict. With Itsuka’s sealing abilities, they decide to seal the spirits and thus evade the threat caused by spirits. The anime is filled with cute spirits that Itsuka tries to woo and kiss, as that is the only way for him to seal them. As he gathers more spirits, he faces many threats as he strives to survive.

Date A Live is an adorable anime that will definitely get you cracking! 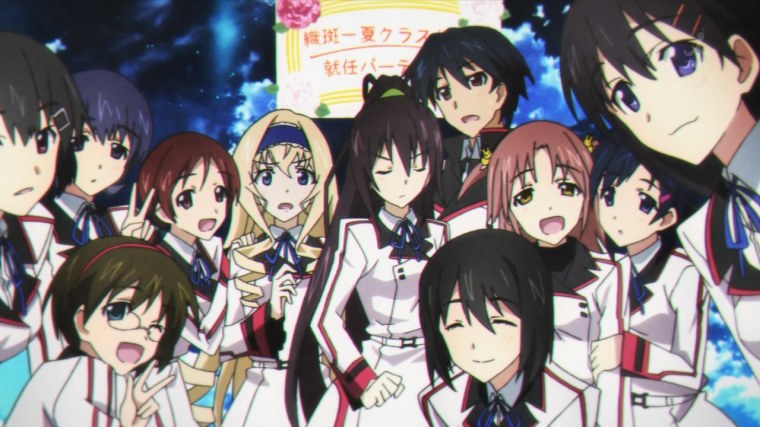 Imagine you are the only boy in an all girl’s school. Sounds fun, doesn’t it? Infinite Stratos captures this very idea, along with a lot of action and comedy. The Infinite Stratos is a very powerful weapon that has been banned. However, the weapon has been designed in a way, that can only be piloted by females.

The story revolves around Orimura Ichika who is a 15-year-old boy, who gets enrolled in an all girl’s boarding school. The reason, you ask? It is because he is the only male who can pilot the Infinite Stratos. The students train to protect the school against various threats. Infinite Stratos follows Ochimura’s life events as he deals with the dangers he faces and the adorable girls of his school. 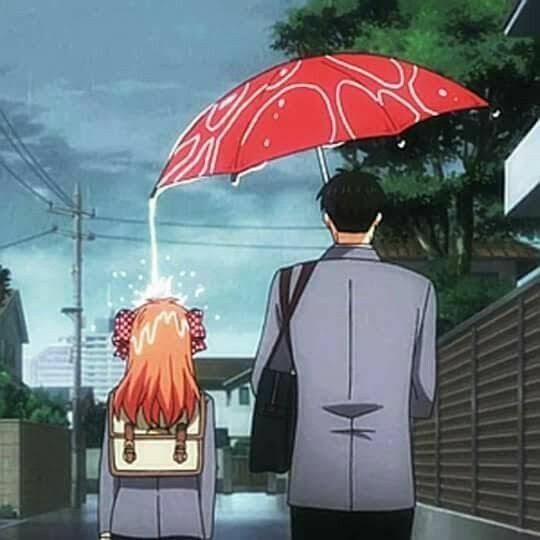 If there’s anything you don’t know, don’t ask me about it – Mikoto Mikoshiba

Gekkan Shoujo Nozaki-Kun is a classic comedy anime, about Chiyo Sakura and her deep love for Nozaki Kun. Nozaki is dense and doesn’t realize that Chiyo confessed to him. However, he does end up making her his assistant, as he is a renowned mangaka under the alias Sakiko Yumeno. The anime follows Sakura’s attempts to win her crush’s heart, hoping one day he will reciprocate her feelings.

The anime contains many funny characters; like a persistent assistant, a harsh senpai, and of course, a reverse trap, who, as a matter of fact, was my favorite character! The anime will give your mind a refreshing revamp through its hilarious episodes. 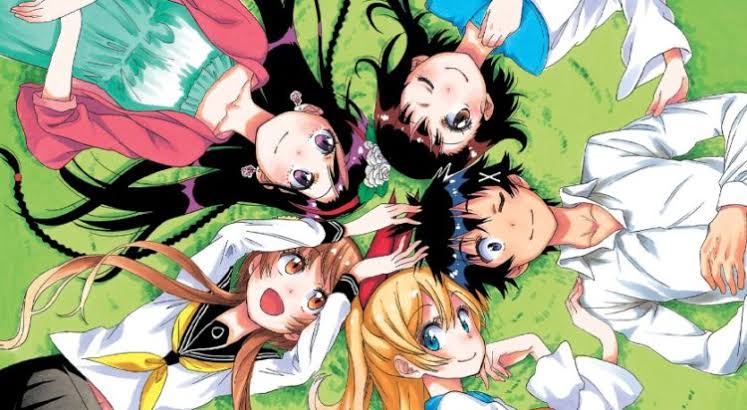 Since we’re talking about harem, Nisekoi had to make it to the list. Raku Ichijo, the next successor of the Yakuza family does not want to do anything with his family as he enters high school. However, when an enemy clan causes the problem, he has to pretend to get along with the daughter of the enemy, Chitoge Kirisaki.

Nisekoi revolves around Raku’s search for the girl he met ten years ago, the girl who has the key to his pendant. He befriends four girls who seem to have some connection with his pendant while a number of girls fall in love with Raku.

Nisekoi is a must-watch comedic harem if you liked Quintessential Quintuplets. 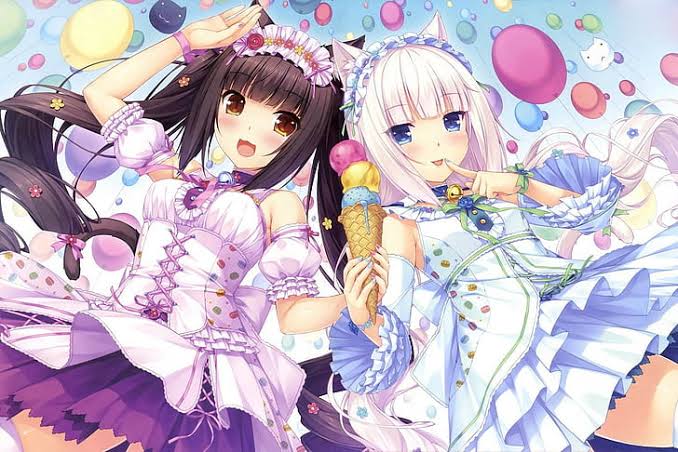 Master, you don’t understand the feeling of a catgirl in love at all! – Chocola

Nekopara is an ongoing anime series, based on the video game series by the same name. The anime combined two of the greatest ideas together – Catgirls and harem. The best thing about Nekopara is the adorable catgirls that serve their master, Kashou Minazuki, who runs a patisserie.

This anime presents a paradise of adorable catgirls, the very idea that boosts serotonin levels. 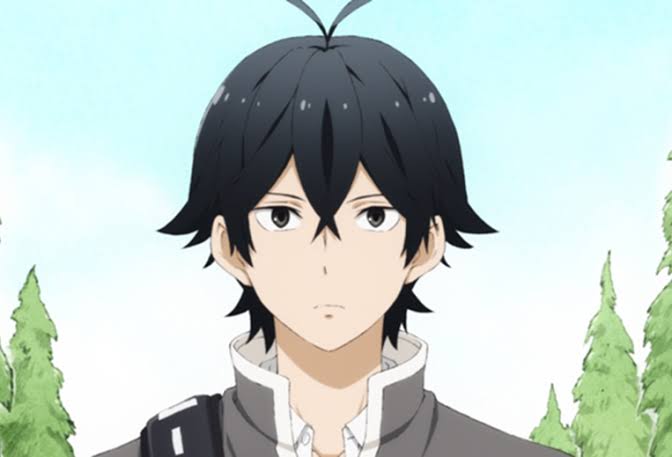 For someone who is only watching, that’s a lot of complaining! – Tsutsui Akane

This is the prequel to the anime Barakamon. The anime series, Handa kun, depicts the life of Handa Sei in high school. Handa is the school heartthrob. He has good looks, a brilliant talent for calligraphy, and a cool personality. However, there is a minor twist. Handa believes that everyone in the school hates him.

The entire series is woven through misconceptions, that make people fall in love with Handa despite his attempts at shutting himself in. Everyone keeps falling for Handa while he keeps believing that everyone hates him. For anyone who is into tsundere comedy, hold your chairs and binge Handa Kun! 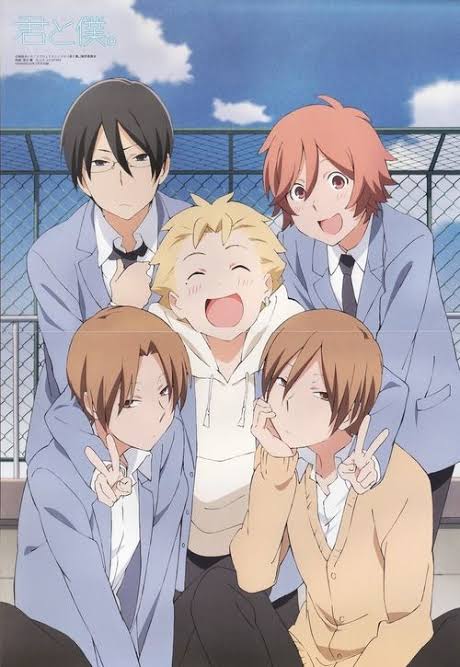 I don’t intentionally ignore anyone. There words just don’t resonate with me. – Asaba Yuuki.

Kimi Boku is not a harem. The anime is about four lifelong friends and a seemingly energetic transfer student. Kimi Boku does not disappoint the viewers in terms of comedy. The anime shows the day-to-day life of these five friends as Chizuru tries to pull them out of their shells.

Mixed with romance, love triangles, and the notorious mayhem created by Chizuru and the twins, Kimi Boku presents us with one of the best slice of life anime out there. I forgot what i was going to tell you. I’ll tell you tomorrow that I like you. – Kanda Saki.

Tsuredure Children is an anime about various high school students having different types of relationships. The anime has a wide range of characters, each better than the other. It is a pretty enjoyable watch, with a good portrayal of every kind of relationship that people have.

The anime adds up to its positive remarks with its undeniably funny content. Tsuredure Children has no specific plot, but it is rather just a compilation of the day-to-day events of these couples who seem to have some link with each other. I would definitely recommend this anime if romance and comedy are your types of anime. 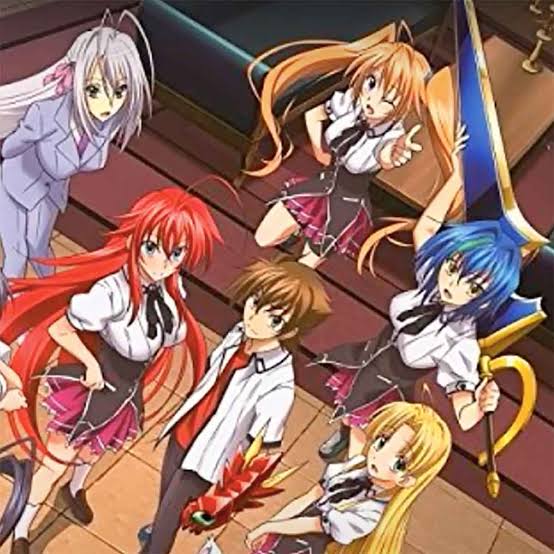 Twice nothing is still nothing. – Raynare

Yes! High School DxD does make it to the list. Even with age restriction content, High School DxD is one of the most prominent comedy harems. The anime series is about a notorious pervert, Issei Hyoudou, who is killed by a fallen angel.  However, he is resurrected back to life by Risa Gremory. The twist, you ask? Hyoudou now has to serve as a servant to Risa.

Unraveling the doors to mysterious creatures such as fallen angels, Hyoudou has to grow stronger to survive amidst these celestial beings.

10. Yamada Kun And The Seven Witches Yamada Kun And The Seven Witches.

You don’t chose who you love. You just suddenly feel it, automatically. – Urara Shiraishi.

Yamada Kun and the seven Witches is a magical harem anime. The storyline of the anime is predictable but the comedic addition makes it worth watching. The main plot begins with a kiss between Shiraishi Urara and Yamada Ryu, which causes them to swap bodies. To learn more about the mysterious phenomenon, they gather for a supernatural studies group.

As more secrets get revealed, they realize that there is more to the school and that the legends might be true. With the progression of the story, we meet adorable witches as they solve the mysteries of the Seven Witches.

With the wide variety of genres of anime, we are free to watch whichever type of anime fits our imagination. With great illustrations, these anime series not only present us with action and magic but also with the simplicities of high school love. Harem being a popular genre has many anime series under it. What makes this genre so loved is the wide range of characters that it depicts.