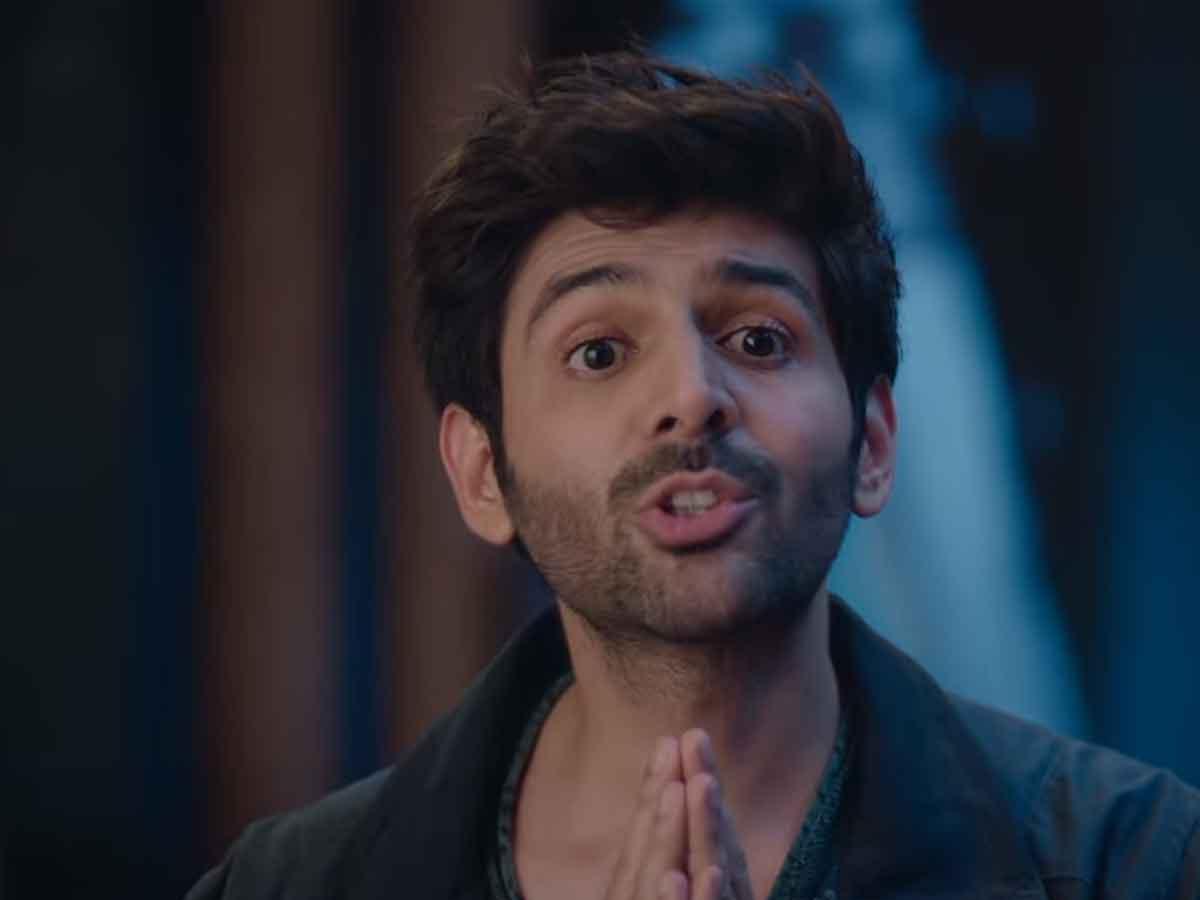 Bhool Bhulaiyaa 2 ending is twisted just like its former film, and we are here to explain it all to you. The film was released in 2022. It is in Hindi and shows us the elements of horror and extreme comedy. Anees Bazmee has directed the project. As for the plot, it witnesses actor Kartik Aaryan in the lead role of Ruhaan Randhawa. He is pretending to be a psychic in order to deal with Majulika, who has come back again to the Thakur household. She is a malevolent spirit who is trying to take her revenge on the family by scaring them out.

The film was a box office success. It was made on a budget of 90 crores. Although, it grosses over 266.88 crores upon its worldwide release through the box office. With these scores, it has become the second highest grossing Hindi film of 2022 after The Kashmir Files. Filming for the movie took place in various parts of India, such as real mansions from Jaipur, Rajasthan, and Lucknow, Uttar Pradesh. Other than that, the cast and crew also traveled to Mumbai and Manali.

The cast includes actress Tabu reprising the role of Anjulika and Manjulika. Then we have Rooh Baba, the role of Kartik Aaryan as discussed. Kiara Advani enacts the character of Reet Thakur. She is a member of the Thakur family who is also getting threats from Manjulika. Rajpal Yadav has come back once again in order to do his part of Chootu Pandit. His role was quite iconic in the previous 2007 film. We saw him being a comedic duo with Akshay Kumar, and it garnered the most attention. Then Sanjay Mishra reprises the role of Bade Pandit. Amar Upadhyay enacts the character of Uday Thakur. 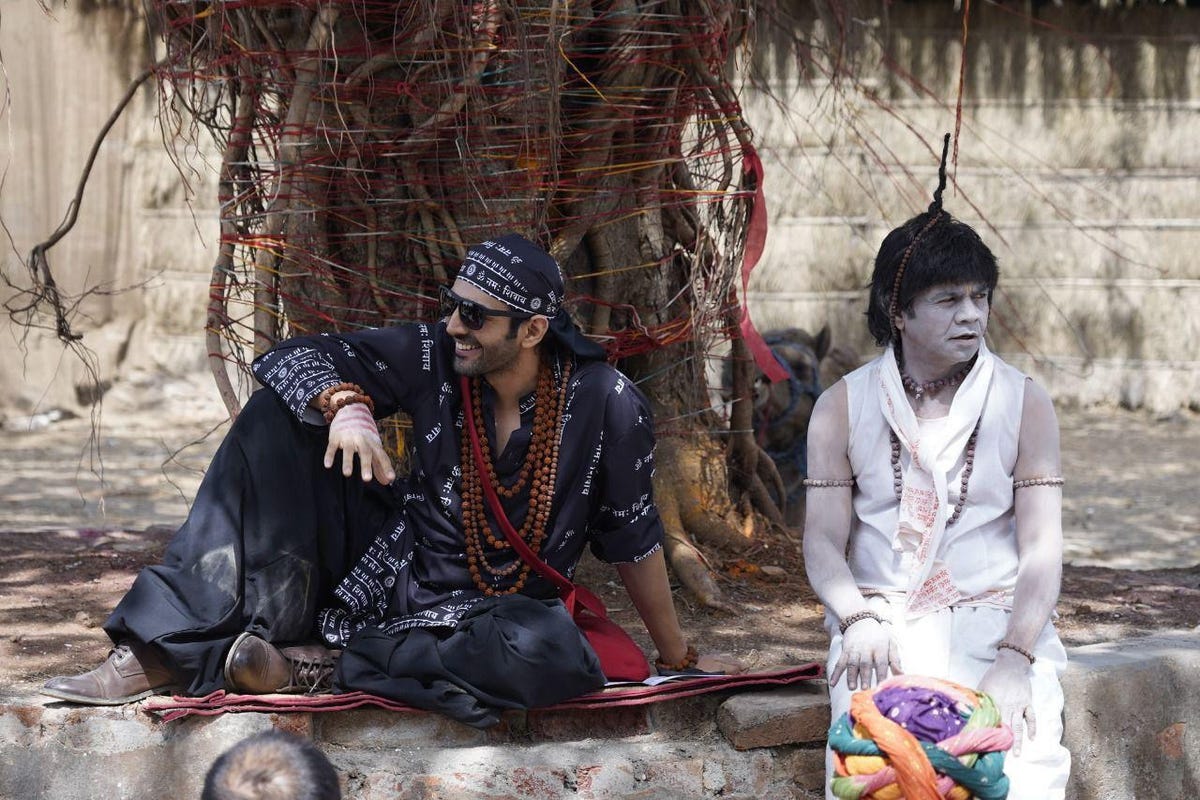 A still of Ruhaan and Chhote Pandit from Bhool Bhulaiyaa 2

The story starts with the mansion of Bhawanigarh we saw in 2007. After finding out the secret of Manjulika, the Thakur family flees the house for their own safety. After 18 years of the incident, the present starts in 2025 in Himachal Pradesh. We see Ruhaan and Reet having a meet-cute. She is on her way to her hometown, Bhawanigarh in Rajasthan, in order to marry her fiance against her will. While the bus they were on meets with an accident and kills every passenger, Reet is safe.

She tries contacting her sister Trisha, but given the fact that she could not hear Reet’s voice, it is instead revealed that Trisha and Reet’s fiance is having an affair. All her family thinks that Reet is dead, and if they get to know she is alive, they will marry her. Thus, in order to have Trisha marry instead, she goes to Bhawanigarh with Ruhaan just to not return home early until her sister marries.

When Chhote Pandit sees the mansion door open, he informs the Thakur family. The whole family arrives where Ruhaan lies that he is a psychic and the spirit of Reet has guided him here where she wants Trisha to be married to Sagar and see the family living here once again.

Did Anjulika Get Justice In The End?

Chaos breaks out as, in the end, it is revealed that the real Majulika is still alive, and it is her twin sister Anjulika who is the spirit roaming in the mansion. Upon getting freed, Anjulika attacks Manjulika. It was all because of jealousy that the two sisters had a fight. Anjulika was the better one out of the duo. She was her father’s favorite, and Uday Thakur, too, fell in love with her.

Out of jealousy, Manjulika kills her. Anjulika’s spirit then tries to take revenge but fails when she gets locked up as Manjulika remains free and alive while stealing her identity. The real Majulika has killed more than 8 members of the Thakur family in 2007 when they got to know about her truth of her. She even pushed Uday from the balcony, thus paralyzing him in an attempt to hide the truth.

Now, the spirit thanks Ruhaan and asks the Thakur family to forgive Reet. She then returns to the room to kill Majulika, who stole everything from her. The entire Thakur family leaves the mansion once again, which now becomes abandoned.

Also Read: Pirates of the Caribbean 3 Ending Explained: A Mess of Tricky Events