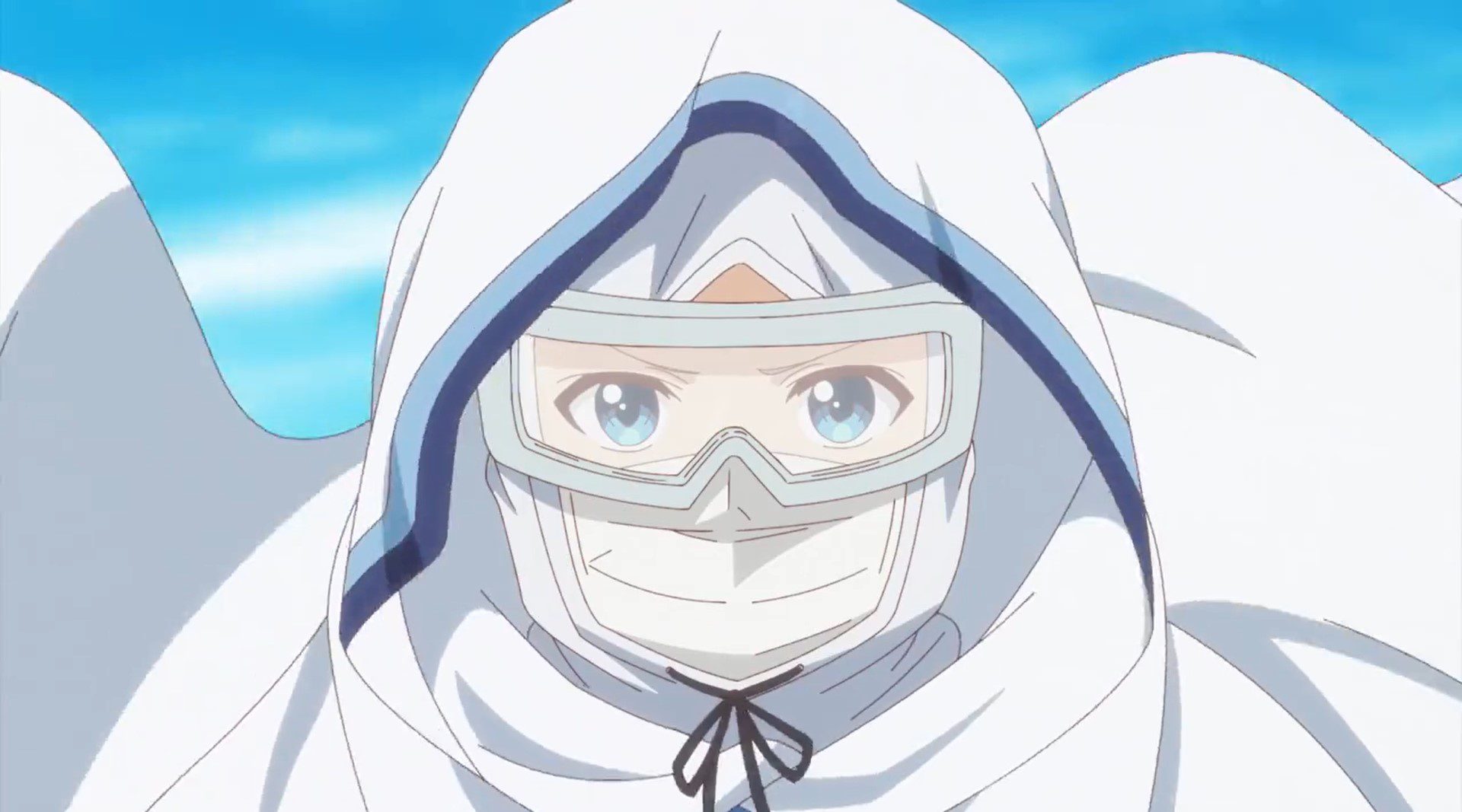 Isekai Yakkyoku Episode 11 is set to release this weekend. The light novel Isekai Yakkyoku also known as “Parallel World Pharmacy” is a Japanese anime series written and illustrated by Liz Takayama. It was released in July 2015 through the user-generated novel website Shōsetsuka ni Narō. An adaptation of the manga by Sei Takano was published by MF Books in January 2016 on the MangaWalker website.

We see in episode 10 that Pharma and Eléonore, fresh from the scurvy cure, begin inspecting the merchant ships impatiently awaiting landfall in Marseirre, assisted by Commodore Jean Alain Gabain, the old regular with whom Pharma had cured his scurvy.

A ship illegally docked in L’Estacque, which is located in the port, but no outbreak has occurred there. Pharma receives news that the plaque has struck L’Estacque. As Pharma rides the Panac-Rabdos alone to L’Estacque, he arrives just in time to stop some desperate villagers from leaving and spreading the disease.

The peskiest and unpredictable variable when it comes to managing a pandemic is human nature. I don’t think anyone needs a reminder these days. Despite what insight he can bring to the frontline and the magically-sourced modern medicine he can provide, Pharma is well aware of just how difficult it will be to manage a Yersinia pestis outbreak.

Aside from the inconvenience of quarantines and safety inspections, sailors and merchants also don’t like having to deal with the hassle of quarantines (especially since their arrival in Crimea and Sicily in 1347 caused the Great Mortality). 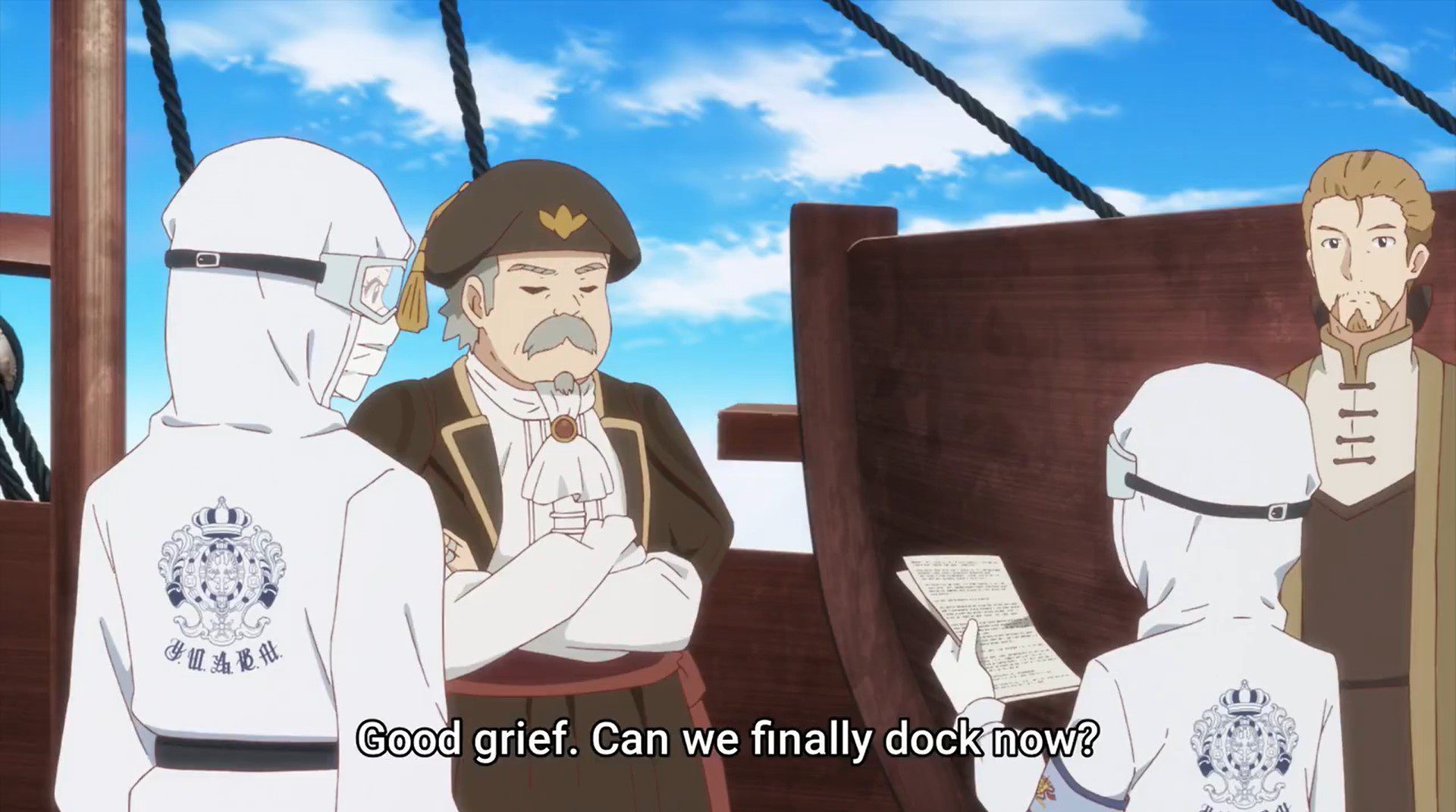 Farma, the youngster who may or may not be the demonic spirit responsible for the Black Death, is forced to deal with the astonished and outraged residents of L’Estacque. The question is whether Farma’s “things becoming worse” is a dramatic enough escalation for such a severe scenario. “The Black Death” is not exactly intended to devolve into misery and plague terror, so I understand why people might not be excited about it—but this is one of those episodes where Farma’s inherently good nature, despite how admirable it is, doesn’t feel like enough. 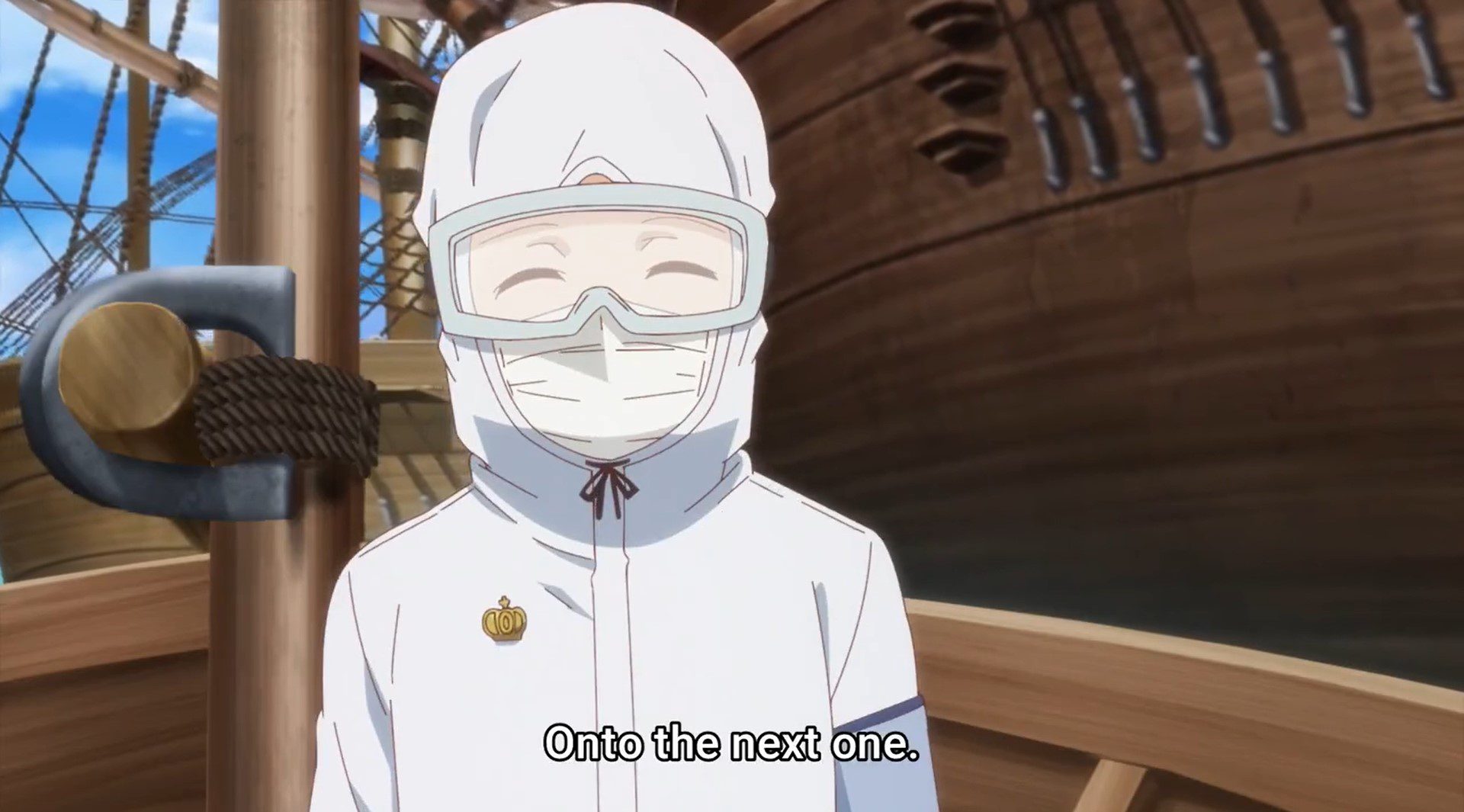 Seeing one of those doomed offshore ships sink into the ocean at the end of the episode is a sad ending to the episode, and the line about failing to take The Black Death seriously felt so overtly familiar that I had to double-check to make sure the light novels were written before spring/summer 2019; there are, to be fair, plenty of consequences in this regard. 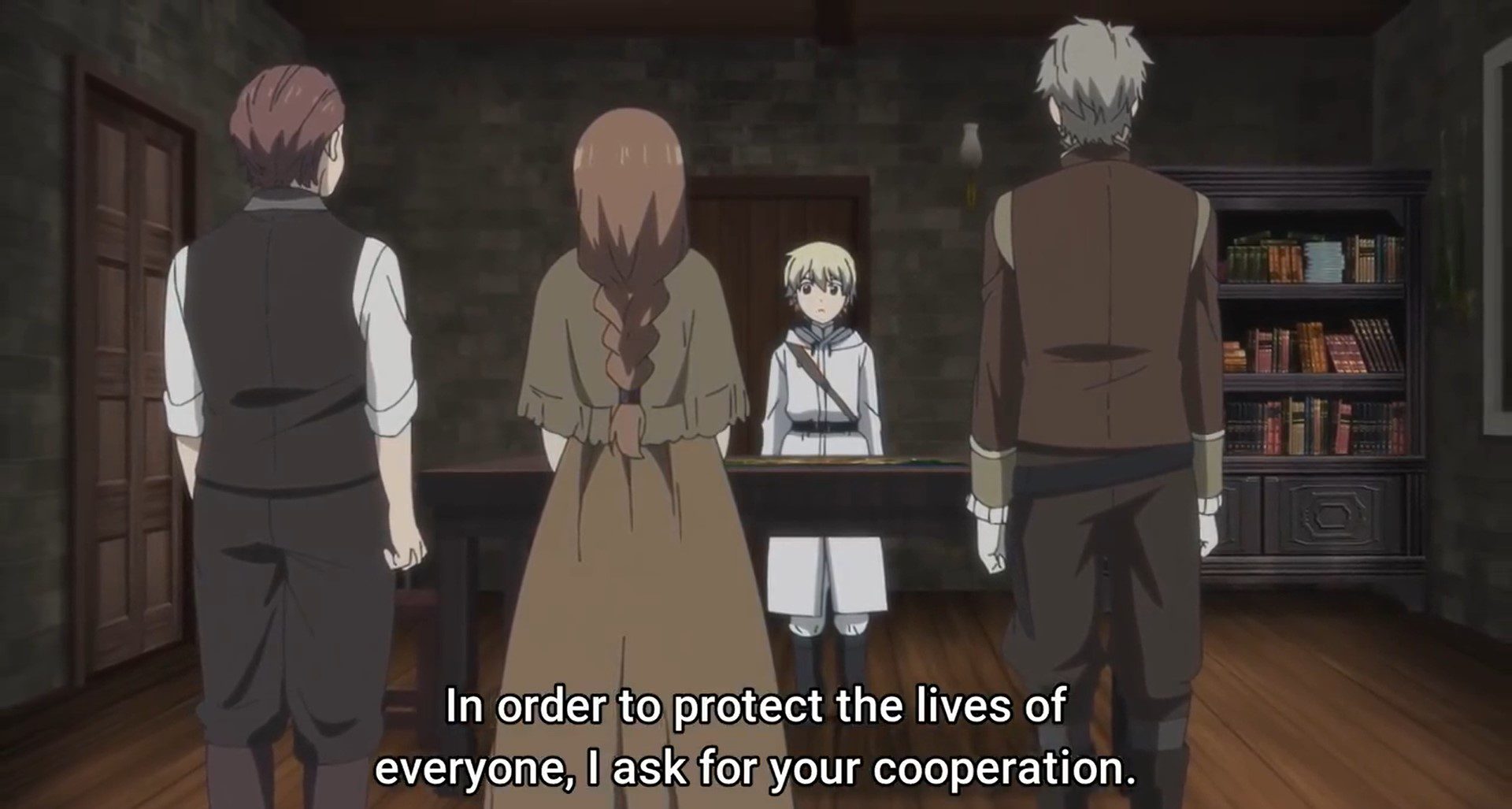 Farma then successfully initiates the quarantine process in L’Estacque, and the ships finally sink. The show missed a golden opportunity to have Farma fight for a change in the direction of the story by PWP’s desire to get all Edu-taining on us and demonstrate how a village quarantine can be set up. 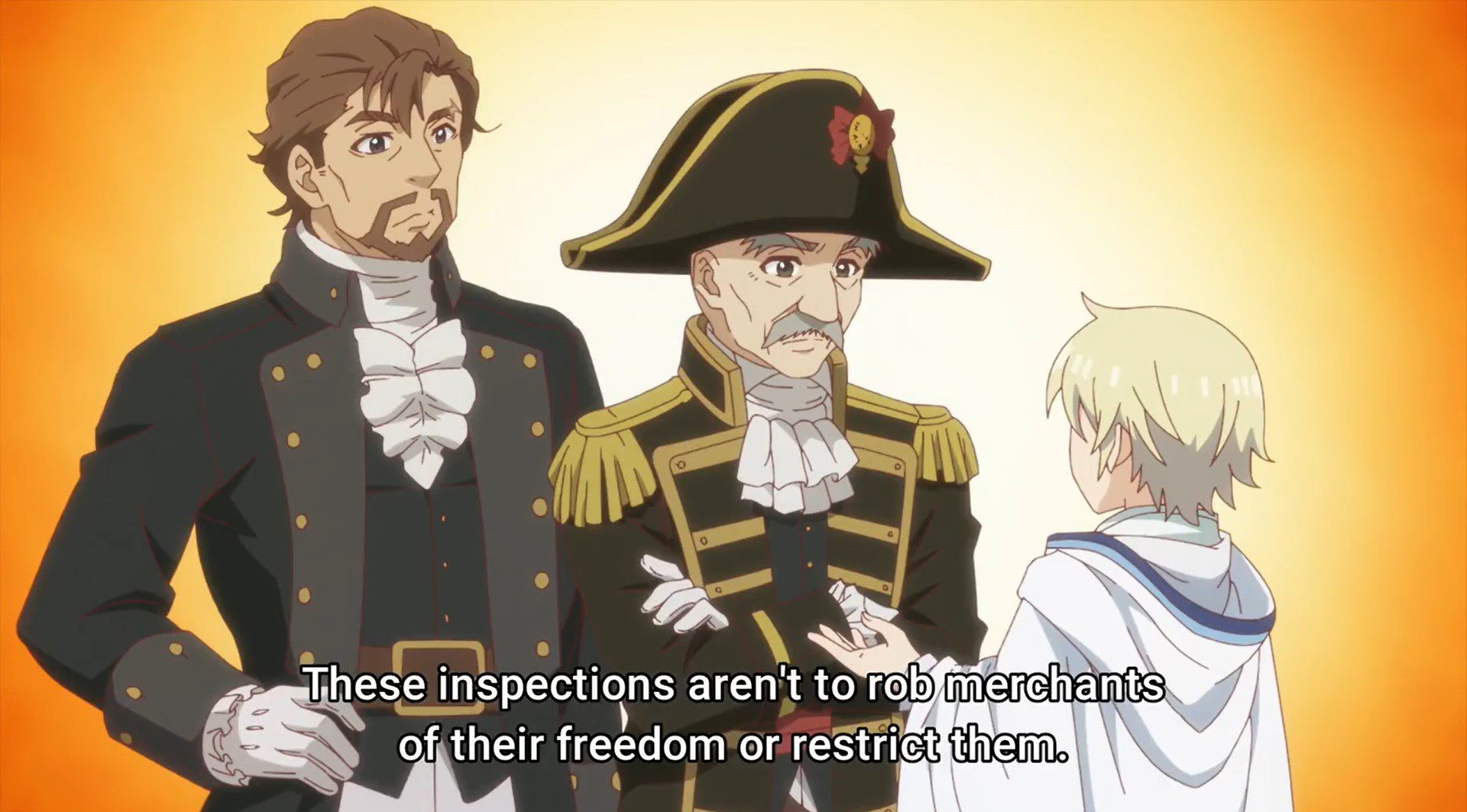 As soon as he nearly had to quarantine L’Estacque’s residents, we got a hint, and I understand why the locals might not have argued with a kid wielding godlike magic powers, but I would have liked to see more deliberate and morally gray conflict for the hero.

In a world where thousands upon thousands of ostensibly grown-up individuals have somehow made not wearing face-masks a cornerstone of their deeply stupid personal identities, the sad fate of the sailors is a nice gesture towards showing how stubborn and foolish people can be in such situations, but it lacks punch in my opinion.

“The Black Death” is not a bad episode at all; it just feels like an interstitial chapter in an arc that hasn’t yet reached its full potential. Nonetheless, as the first season of Parallel World Pharmacy concludes, I am excited to see what Farma has in store for us.

Isekai Yakkyoku Episode 11 release date is set to release on 18 September 2022, Sunday at 9:30 PM (JST). The episode titled “The Miracle at L’Estacque”

Where To Watch Isekai Yakkyoku Episode 11?