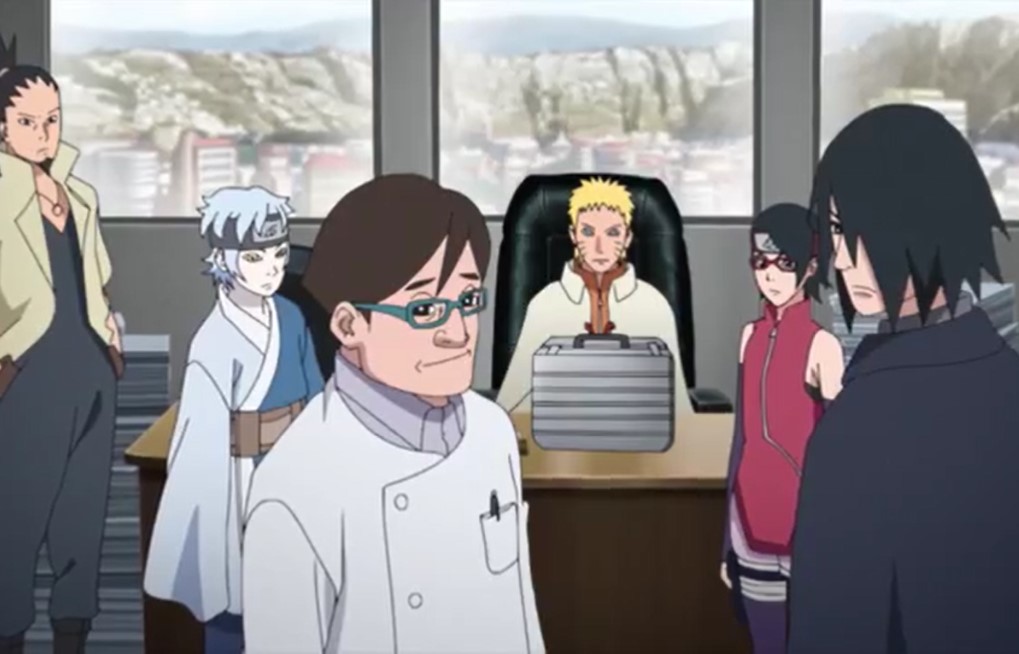 Mogino and Konohamaru have managed to locate the airship that has crashed. But inside the vessel’s containers, they find that someone took them before the arrival at the scene. Konohamaru is wondering what the container was opened and what was inside of it. He notices a data unit and decides to use the scroll flash drive to find the truth. Konohamaru puts the scroll flash, and it copies the data. He is glad that maybe the data can provide some clues.

At the same time, Mogino, who was near the entrance, got attacked by a hooded man. He tabs Mogino on his chest, but Mogino manages to push him away. He realizes that the guy is the one thaw they defeated earlier inside Victor’s lab. His hands can create blades to cut the enemies. Konohamaru hears and noise and rushed to see what is happening. Mogino told Konohamaru to flee, and to his surprise, the hooded guys started to show up in numbers. 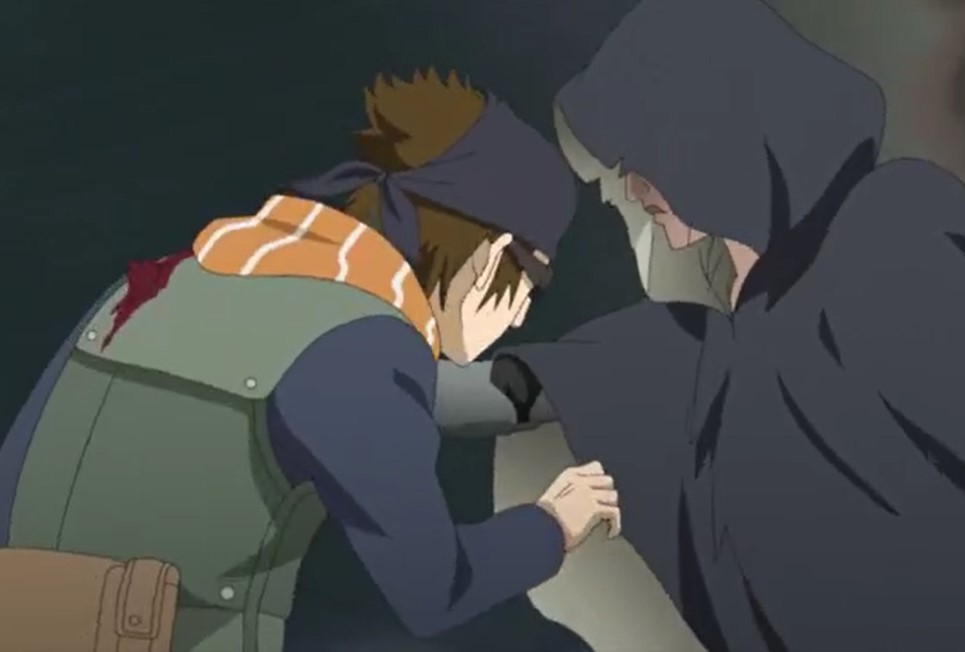 Konohamaru is surprised looking at the appearance of that hooded army. Meanwhile, at the Leaf Village, the 7th Hokage talks with Sasuke, Shikamaru, and team 7. Sasuke reveals that he went around to gather the intel on Kara’s hideout. But he could not find anything worth mentioning, and Shikamaru is surprised that Sasuke could not find anything since he is reliable. Sasuke said that their hideout is not above the ground, so it is hard to trace them.

Sasuke warns everyone not to let their guard down. Naruto comments that they need the power to protect everyone from the mysterious enemies. Boruto replies that is what ninjutsu is for and not scientific Ninja tools. The scientist Katastuke arrives praising his scientific Ninja tool. Boruto yells at him that he is the quack scientist. And he will never forgive him for messing up his Chunin Exam.

Katatsuke smiles and greets Boruto, saying a long time no see young Lord, and Boruto asks why he is here. Naruto replies that he called Katatsuke for a mission, and Katatsuke is not a quack. Naruto reveals that Katasuke has fine skills, and he is another power that supports the Hokage. Just like Sasuke whom, Boruto admires so much, and the key is how someone uses science with any power. Boruto fires back at his father, saying that Shinobi is about hard work and guts.

Naruto tells his son not to worry since he is now at the skill level of Chunin. Naruto said that he has a mission for all of them. The mission is to transport the prosthetic arm to the High-Tech Research Lab in the city of Ryutan. Naruto said Team 7 is going with Katatsuke. Naruto tells Boruto to guard Katasuke and deliver the scientific Ninja tool. It is a C-Rank mission. Katatsuke is looking forward to work with the young Lord.

Boruto thinks that they should have been doing a B-Rank mission, not C-Rank. Boruto left the office, saying who would want a mission like this. Naruto told Sarada and Mitsuki to keep a close eye on Boruto’s mark. The role in this mission is to watch over Boruto. Shikamaru asks if they think Boruto will accept this mission, and Sasuke vows that he will come. Later, Sarada went, and Mitsuki talks with Boruto about the mission.

Boruto said that he just hates the scientific Ninja tool, and Sarada said she would live to Hokage’s expectations. Mitsuki reveals that prosthetic is not just any scientific Ninja tool. But it is Lord Seveth’s hand and a hand crucial protecting their fellow villagers. Including the ones he loves in his village and his family, it is important to protect something precious. Boruto notices that he is being outsmarted and said that he never said he is not going.

Mitsuki said he saw that, and he was just pulling his leg while Jugen gets treatment from Amado. He talks about the traitor who tried to steal the vessels—team seven heads out on their mission and board on train. Inside the train, they met with an old friend of Katatsuke who stole the intel. He placed a genjutsu on Katasuke and stored the data on the intel. Team 7 didn’t realize it, and they reached their destination. Boruto tells the man that they will meet again.

Get other latest development on this Anime here: Boruto: Naruto Next Generations Episode 182. For more updates, wait until the latest episode is released.