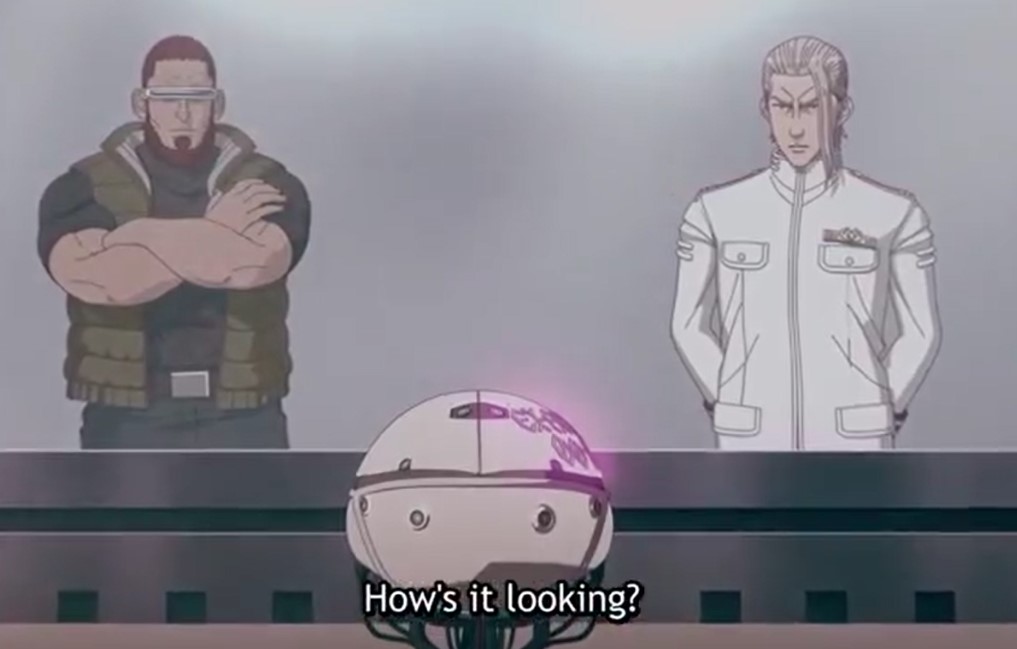 In 2014, Natsume and Suuichi talked about the latest model that they want to check out. Natsume is not familiar with technology, and Suuichi advances him that technology is right. But people might use it for evil things. In the present, Natsume realizes that he used to be a perfectly ordinary high schooler until he got into an accident. After six years, he woke up just as a brain and was forced to fight battles, but he did not refuse.

Natsume is doing everything, thinking that he will find a way to be a human again. He hopes that his wish will come true and decide to continue to work with the police. Natsume is told that he is just a brain; he will never go back to his human form. The voice keeps on telling Natsume to destroy everything. Natsume wakes up and finds that he is a human inside his room. He started wondering why since he was just an android brain.

Ex-Arm Episode 6 will be released on Monday, 15 February 2021, at 1:05 JST. A new episode of Ex-Arm will be available every Monday. You can support this anime official at www.exarm-anime.com and Crunchyroll. Let’s find more about Natsume in 2014 below.

Natsume couldn’t stop thinking about Alma. On his way to the restroom, he bumps with Kimura, who wanted to fight him. Kondo arrives, calling the two punks and ask if they have balls of steel to be fighting in his halls. Kondo comment that he can soften their balls, and the two started running. He chases them, commenting that they can run their butts out. Natsume bums with Minami; he accidentally hugs and kisses her.

Minami slaps Natsume thinking that he did everything on purpose. Kondo manages to catch Natsume. He sends him to the principal office and settles everything there. Kondo is the school counselor, and Alisa is the school principal. When Natsume left the office, Alisa reveals that this is a fantasy world. Alisa decided to log out of Kondo and send him to the year 2030. In the year 2030, Kondo is working as an android police officer.

Kondo went to Chief Shiga and reported what is happening in the year 2014. He reveals that they are all enjoying a generic-school life in full VR. Kondo asks Shiga if this process will help to awaken Natsume’s memory. Shiga looks at Natsume’s android brain in his office. Back in 2014, Natsume is late for school, and he bumps with Alma again. Minami, Chigake, and Kimura talk about Natsume and thinks that he has messed up teenage life ideas.

Chikage comments that this world is built from Natsume’s consciousness. If they want to investigate his memories, they have to poke at things that Natsume avoids or likes. Alma comments that she has an idea of how they will awaken Natsume’s memories. She said that Natsume’s accident must be a huge source of trauma for him. Alma thinks that reenacting one accident in Natsumes’s presence should do the job.

Alma and Minami plan a truck accident that failed and wonder why. Alma stands in the middle of the road. But the truck that was about to hit her disappears, and Natsume told her not to wander in the middle of the streets. Minami asks Alma what has happened. Alma reveals that Al failed to intervene. Later Alisa decided that they should all log out. But she receives a message that doesn’t allow them to log out.

Chikage realizes that it means they are trapped inside the VR space. Meanwhile, Natsume met with Yggdrasil. Alisa realizes that the world is based on Natsume’s memories, but Yggdrasil brings it to life. Ygg is the one that drew up Alma’s design. Minami comments that Ygg is just like Alma’s mom. Kimura comments that it is not the time to be making a family tree; they need to get out of here.

Alma asks if they can reveal the truth to Natsume that they are in a fantasy world. Alisa comment ts that he might refuse to accept the fact. It is better to let Natsume figure out the truth by himself. Later Minami acts like she is in love with Natsume and asks him to kiss her. When they were about to kiss, Ygg arrives and pushes Natsume back. She comments that Natsume belongs to her and no one should touch him.

Ygg and Minami talk in private, and she told Minami to let Ntsume stay in this world. She also reveals that she is Natsume’s wife, and it will be best for Natsume to stay in a fantasy world. Later they realize that Ygg was up to no good, and they battle her. While Natsume finds the truth about the world, he is in.

That is what Ex-Arm episode 6 was all about; take a look at the previous episode here: Ex Arm Episode 5.