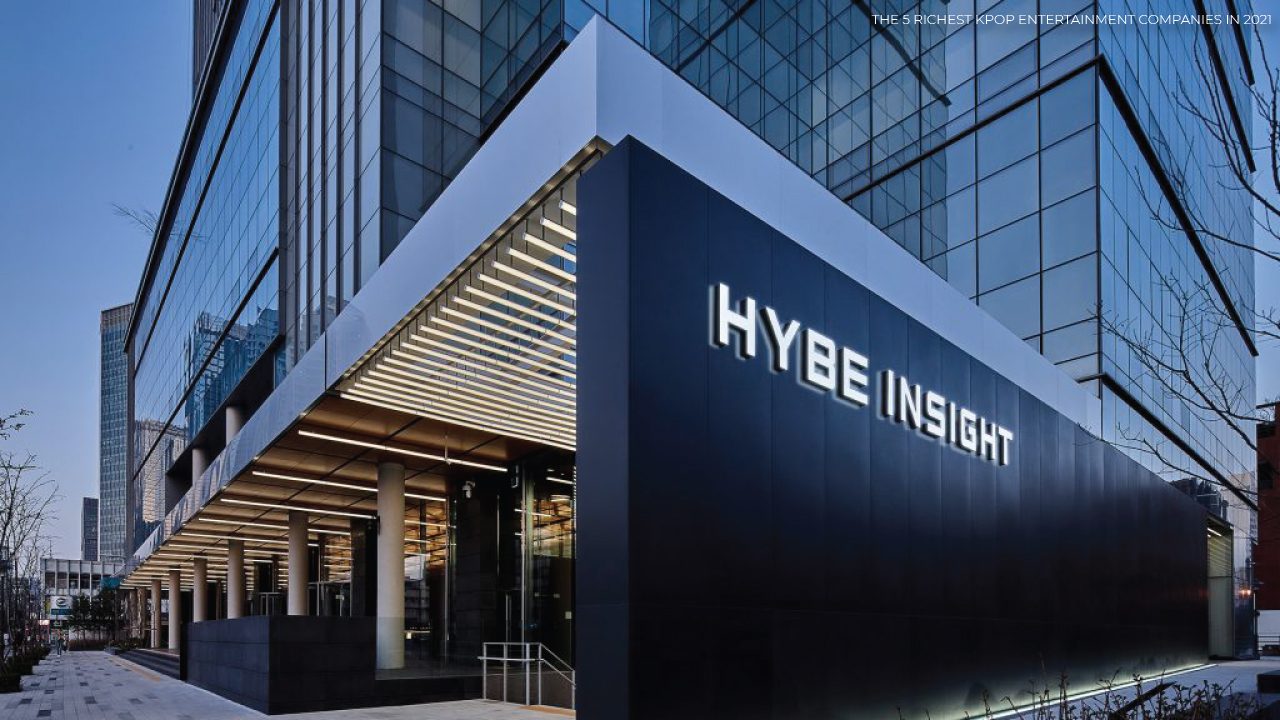 Since the decade, the big three have ruled the market. But, after the global success of BTS, things have changed in the South Korean music industry. Down below is the complete list of the Top, most famous, and 5richest Kpop Entertainment companies:

BTS is known worldwide, and they are probably the biggest Boy band on the planet at present. But, they are not the only ones who are growing. Because of BTS and its success, its management label, HYBE, is also the wealthiest and famous company in South Korea. Not only BTS made HYBE Labels a billion-dollar company, but it also added billions of dollars to Korea’s economy. The group is estimated to be worth $3.4 billion. HYBE’s creator Bang Si Hyuk is estimated to have a net worth of $3.2 billion, more than most other label bosses. 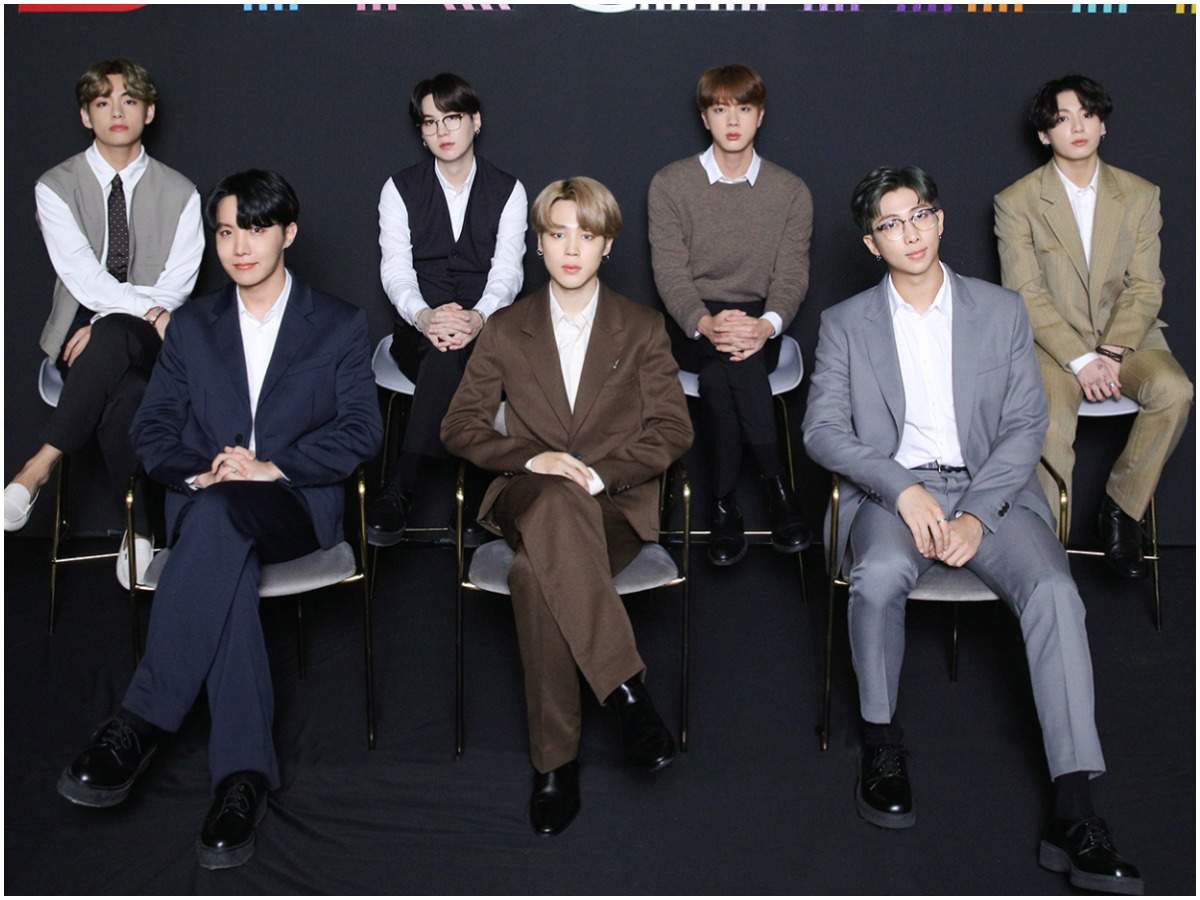 HYBE has acquired Pledis Entertainment, formed BE: LIFT, and Source Music in the previous year to expand its reach. Moreover, they have acquired Scooter Braun’s Ithaca Holdings to increase the BTS market in the west. With its newest collaboration with Ithaca, HYBE will focus on elevating its reach in music in the west. In July, Bang Si Hyuk stepped down as the CEO, but he still is the central key person of the company. HYBE has changed the leadership arrangement and primarily focuses on setting up head offices in the USA and Japan markets.

Reportedly, HYBE Label has a capital market of $5.5 billion, with almost 100 million subscribers on all social media handles.

Known for groups like TWICE, Stray Kids, ITZY, 2PM, and many others, JYP is undoubtedly more prominent than before. As one of the three biggest companies in South Korea, JYP has maintained its popularity and wealth. Founded by Jin Young Park, aka JYP, the label is known for producing royal girl groups. The active groups among the label might be 4, but JYP is responsible for shaping the career of several Kpop idols. The label’s idol groups also include legendary G.O.D, GOT7, Wonder Girls, and Miss A. Also, JYP has and has some of the most prominent artists under their roof. Rain is one of JYP’s most successful solo artists. 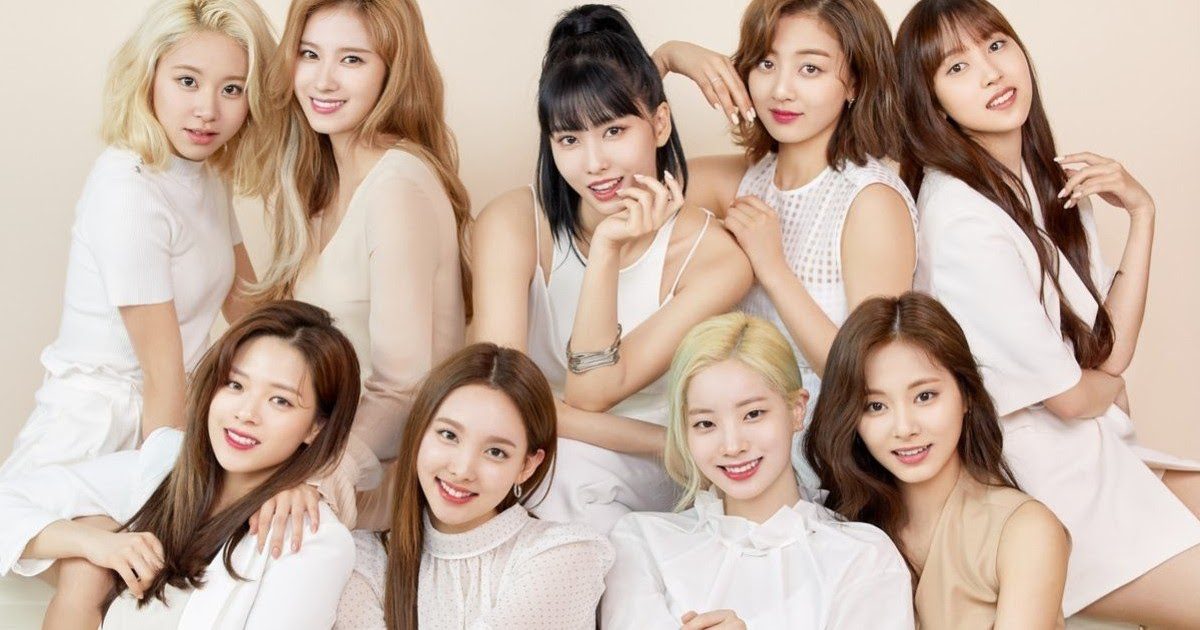 Among all the entertainment labels doing business in South Korea, JYP has the most accurate and systemized training schedule to turn the trainees into Kpop idols. It has JYP previously has stated that “Companies like ours have an academy, a sort of training system, to find young, talented kids and pull out the best in them. It started off organic, but we systematized it.”

At present, JYP has a market capitalization of $1.1 billion. And with new partnerships with Naver and SM Entertainment, JYP can witness more success in the future.

Founded by Yang Hyun-Suk in 1996, YG Entertainment is home to hit Kpop groups such as Big Bang, Blackpink, Winner, iKon, and Treasure. YG was also home to groups like 2NE1, Epik High, and artists such as PSY, Gummy, and Lee Jong-Suk. Yang Hyun-Suk excelled with YG Entertainment due to his own experience being a Kpop idol. The founder of YG rose to fame in South Korea for being one of the ‘Seo Taiji and Boys’ members.

Although YG is recovering from the past sex scandals and tabloid stories, it has maintained its reputation as one of the top companies in South Korea. After the disastrous scandals of Big Bang’s Seungri, Jung Joon Young, and Choi Joon Hoon, YG’s stocks have seen a significant downfall. But, thanks to Blackpink, the group is doing great in terms of sales and capitalization. Other groups like Winner, treasure, and iKOn are also the reason behind its success. The estimated market capitalization of YG is said to be $800 million. 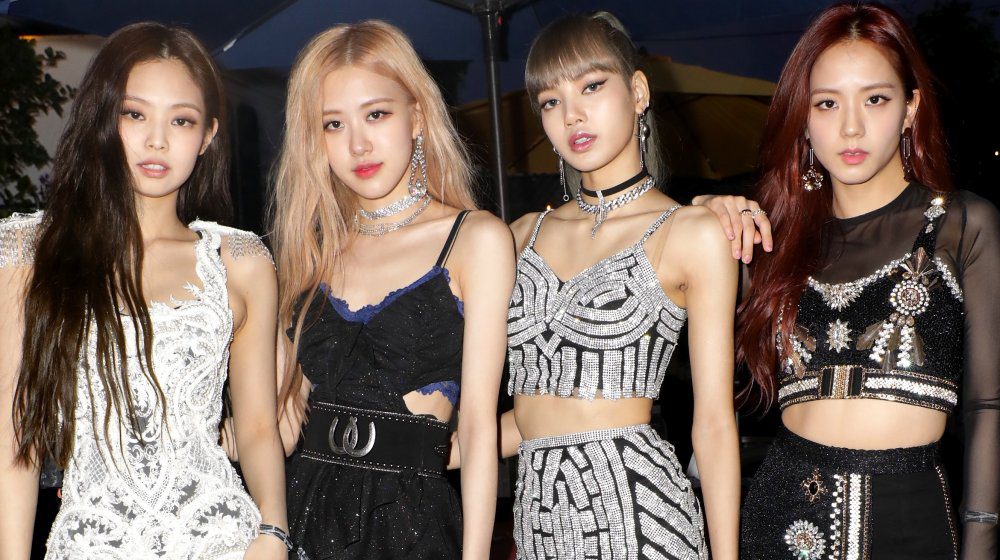 Companies like LMVN and China’s Tencent have invested millions into the company, and the netizens can expect YG to grow back like before in some years. Unfortunately, Yang Hyun Suk stepped down from the CEO position as he could not bear the scandals and uncountable questions of the public. Along with his artists, YG was surveyed for his involvement in sex scandals and illegal gambling.

Lee Soo Man’s SM Entertainment is probably the most popular entertainment label ever since Kpop began in the nation. However, it has lost its magic of making the most sales and profit in the industry for a couple of years. SM was founded in 1995 by record executive and producer Lee Soo Man. Since the first generation of Kpop, SM Entertainment has birthed Hallyu Kpop groups such as H.O.T, S.E.S, TVXQ, Super Junior, Girls Generation, EXO, SHINee, Red Velvet, NCT, Aespa, SuperM, and many more. Furthermore, Kpop superstar and world-famous artists BoA is also an SM Artist. SM is no longer in the big three but still plays a vital role in the Kpop world. SM grows daily with active bands such as EXO, Red Velvet, NCT, superM, SHINee, and Aespa.

Companies like Ali baba and Tencent have invested in SM Entertainment, and with a huge fan following of artists from China, SM is still ruling the Chinese market. According to reports, SM’s 90 percent Youtube followers are not from South Korea.  SM is estimated to have a market capitalization of $665 million.

Chinese Market is SM’s biggest target. Moreover, EXO’s popularity in the country has helped SM to increase its stock value. Earlier, in 2019, SM made its very own avengers by combing the best artists from EXO, SHINee, and NCT and putting them under one group- SuperM. Plus, with SuperM getting recognition from the west, SM is doing its best to break into the US market. 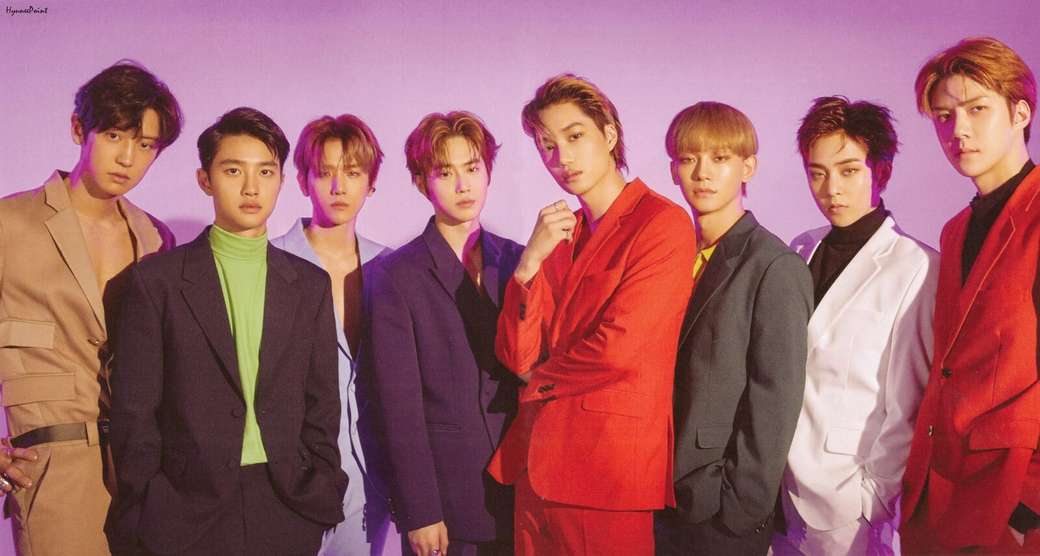 Currently, SM Entertainment has joined hands with various companies to expand its business. However, it is focusing more on technicalities rather than producing music. The latest from SM is their upcoming survival show which will help NCT find a new American member to join the group.

Stone Music Entertainment stands at number 5 with IZ*ONE, Fromis_9, and more groups. It is a privately functioning company under CJ ENM Entertainment and is also one of the biggest co-published companies in the country. Besides being a record label, Stone Music is also a talent agency and music production company. They founded their music label- Off The Record- to manage the winning groups of reality show Produce 48. Both IZ*ONE and Fromis_9 are the winners of the reality show. Furthermore, they established LM Entertainment, Swing Entertainment, MMO Entertainment, and Studio Blu. 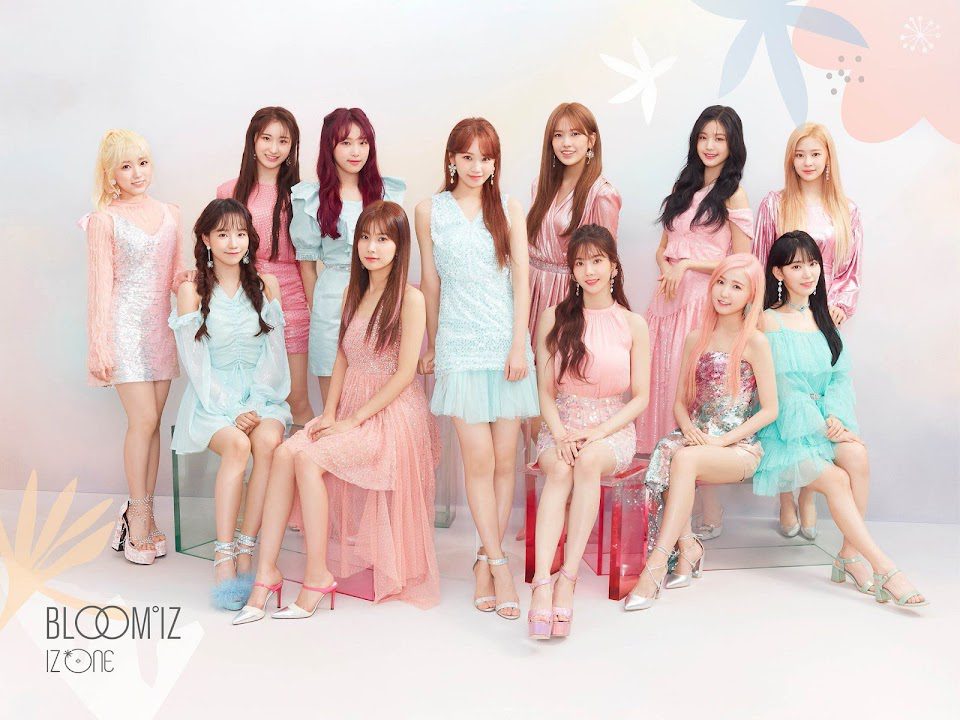 Their artists include Yoon Ji sung, Heize, X1, Kim Jae-Hwan, Truedy, Fromis_9, IN2IT, and more. Sadly, IZ*ONE disbanded in 2021 for specific reasons, but the girl group managed to rule Japan in 2019-2020, contributing to Stone Music’s popularity and growth. With multiple established labels and businesses, Stone will eventually turn into a giant company soon. As of now, they have their estimated market capitalization stands at $200 million.

With this, we conclude our list of the top 5 richest Kpop Entertainment companies. Kpop is growing every day; it started with Seo Taiji and Boys, and now, nothing is more extensive than BTS. But, we might see bigger groups emerging in the upcoming time. Until then, keep reading!

Also Read: bugAboo Releases New Teaser: Know All About Them.