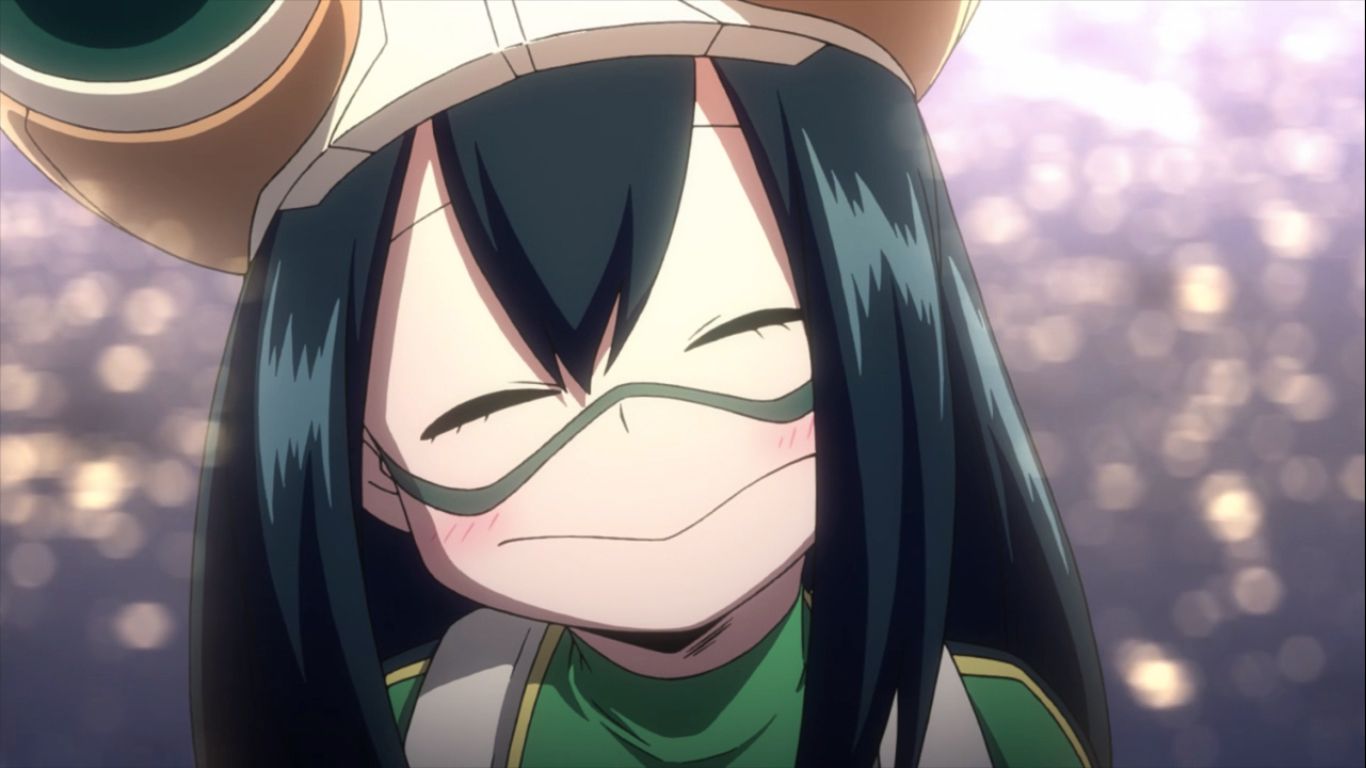 Tsuyu Asui, popularly known as Froppy, is one of the fan-favorite and waifu of many. Her deep voice, her style of being blunt, her ability to grasp situations quickly, her hard work, and her cuteness makes fans unable to resist and love her. One of Midoriya’s classmates, Tsuyu, is a girl in class 1-A hero course with a quirk similar to a frog. She first appeared in episode 5 of the BNHA series. And fans have been noticing her since then, resulting in them liking her even more.

The BNHA series, a manga created by Kohei Horikoshi, is about powers, better known as Quirks. The world is centered around quirks, and every person has a quirk of their own. There was an exception, though. Izuku Midoriya had no quirk at all. After meeting All Might, he had become the next successor of All For One. And it was Tsuyu Asui, the first one amongst his classmate, who quickly noticed the similarity between All Might’s and Izuku’s quirk. So, let’s finally see some of the iconic moments of Froppy, who is not only smart, sharp, and intelligent but is also overloaded with cuteness.

5 Most Iconic Froppy Moments in BNHA

Tsuyu during the U.S.J Incident

Remember when the U.S.J Incident happened in seaon1? Fans had chills all over watching that episode. Mineta, Midoriya, and Tsuyu were grouped together- by the villains because their quirks were unknown to the villains and fought together, each relying on each other’s strength. The teamwork they had was none-like.

Tsuyu, during the U.S.J. Incident, had shown great skills, which was totally expected. Her planning with Midoriya and her strength in backing them were all expected from her. Yet, the moments were so fulfilling that fans can never have enough of watching. 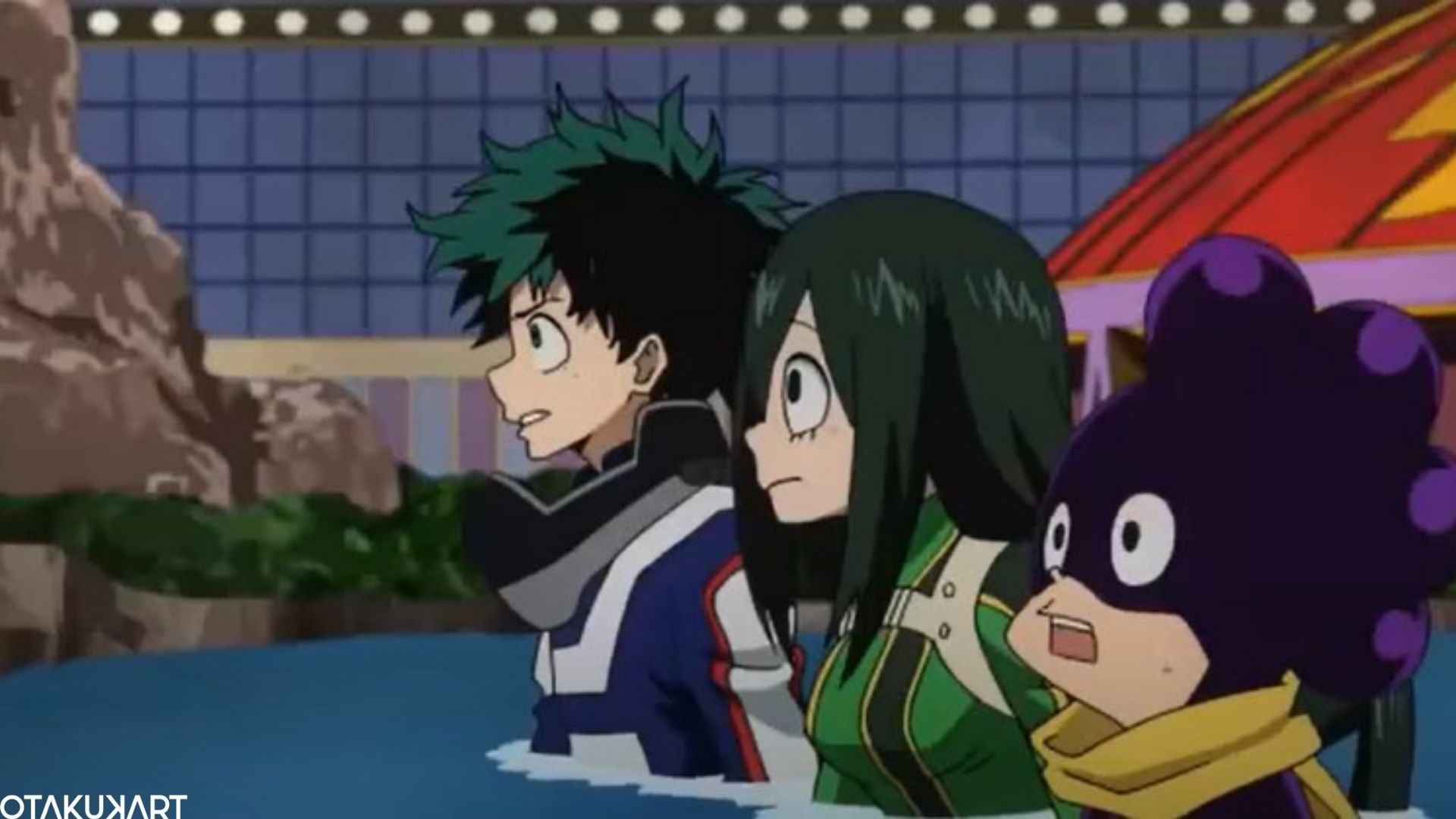 Tsuyu, Izuku and Mineta teamed up

Season 2 Episode 13, the time had come for the hero class to introduce their hero and present it before the class, Froppy did something to bring a smile to not only the students but also the fans. What do you think it was?

After Aoyama and Mina had presented their hero names, the heavy responsibility of trying to lighten the mood there was an unintentional pressure on Midoriya, Sero, and Kirishima. However, Tsuyu went first and presented her Rainy Season Hero: Froppy. The mood was not only lightened, but even Midnight complimented her. Izuku, Sero, and Kirishima were so glad that they transformed from being gloomy to happy. 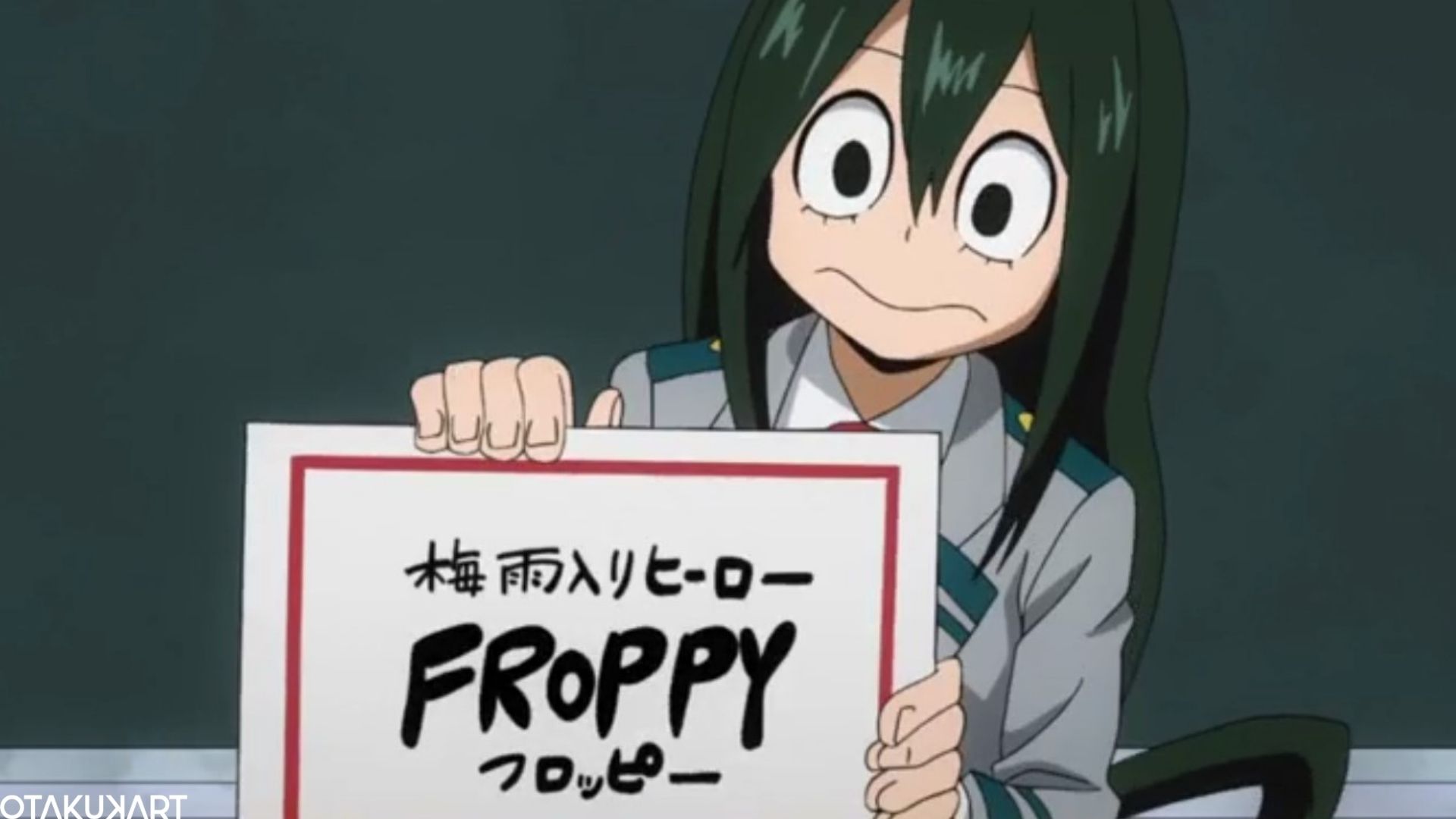 In Season 3 Episode 13 (again), Tsuyu breaks down into tears. A girl who had to speak whatever’s in her mind, whether she wants it or not, when finally cried, fans were cathartic. Apologizing for what she had said to Kirishima, Iida, Yaoyorozu, Izuku, and Shoto, Tsuyu also tells them that she just wanted to have fun together, forever. 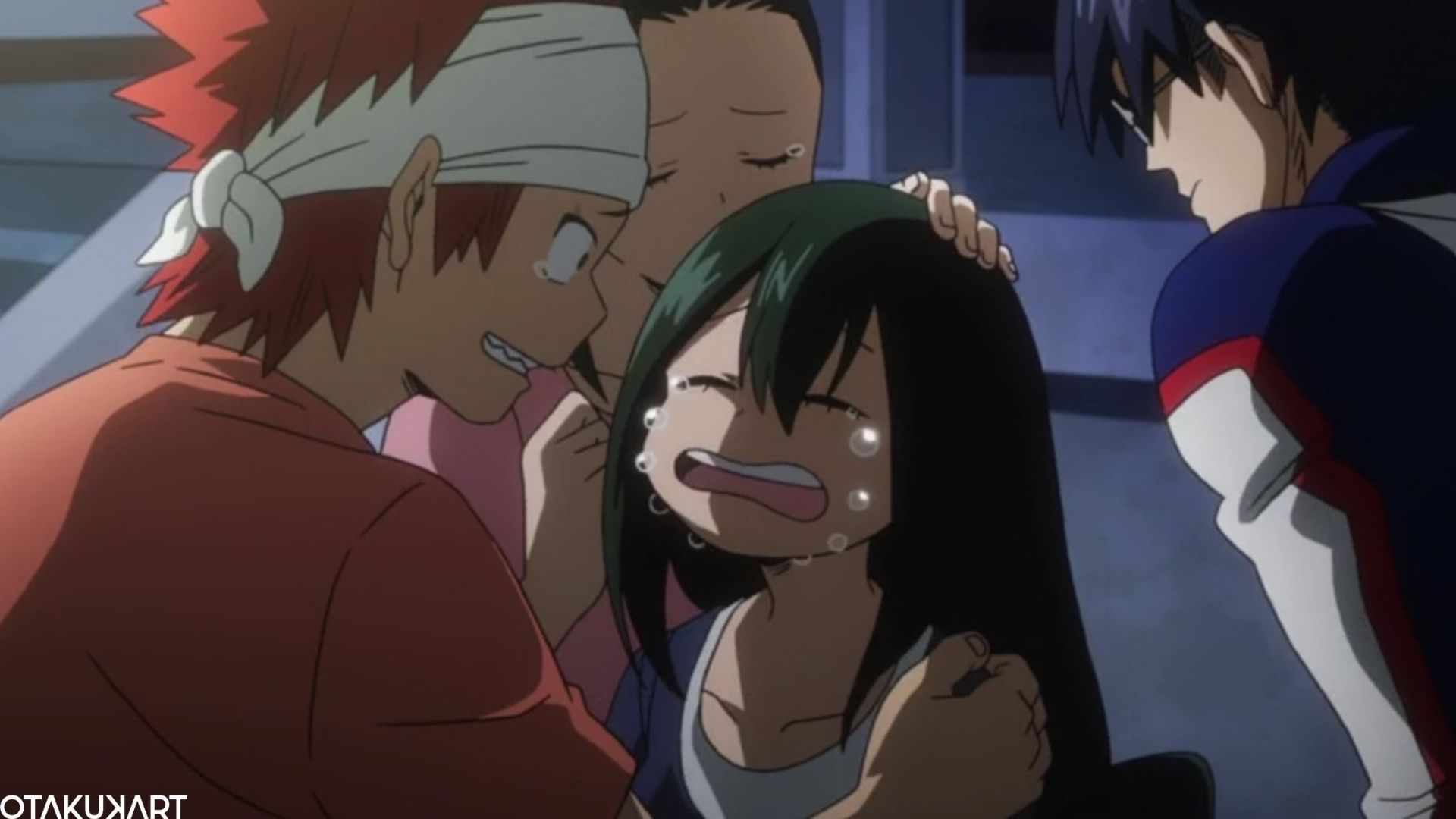 Tsuyu apologized to everyone

Also Read: Best Tsuyu Asui Quotes That Will Freshen You Up

Froppy with Ryuku agency VS Rikiya

While in season 4, there was chaos and chaos, Froppy had us wrapped around her little finger. Well, her fighting spirit was so amazing that even the fans could tell how much she was dragging that small body of hers. Fighting against a huge monster-like enemy, Rikiya Katsukame, Froppy looked as fragile. But, knowing her full well, to underestimate her like this isn’t likable.

Alongside Uravity and the Ryuku agency, Froppy has surpassed her limits. Rikiya Katsukame sucks the life forces of those around him, only possible if he touches the being. However, after taking the drug from Irinaka, he could take the life forces of those around him without even touching them. While almost everyone was affected, Froppy (and even Uravity) showed resilience and defeated the enemy. Proud! 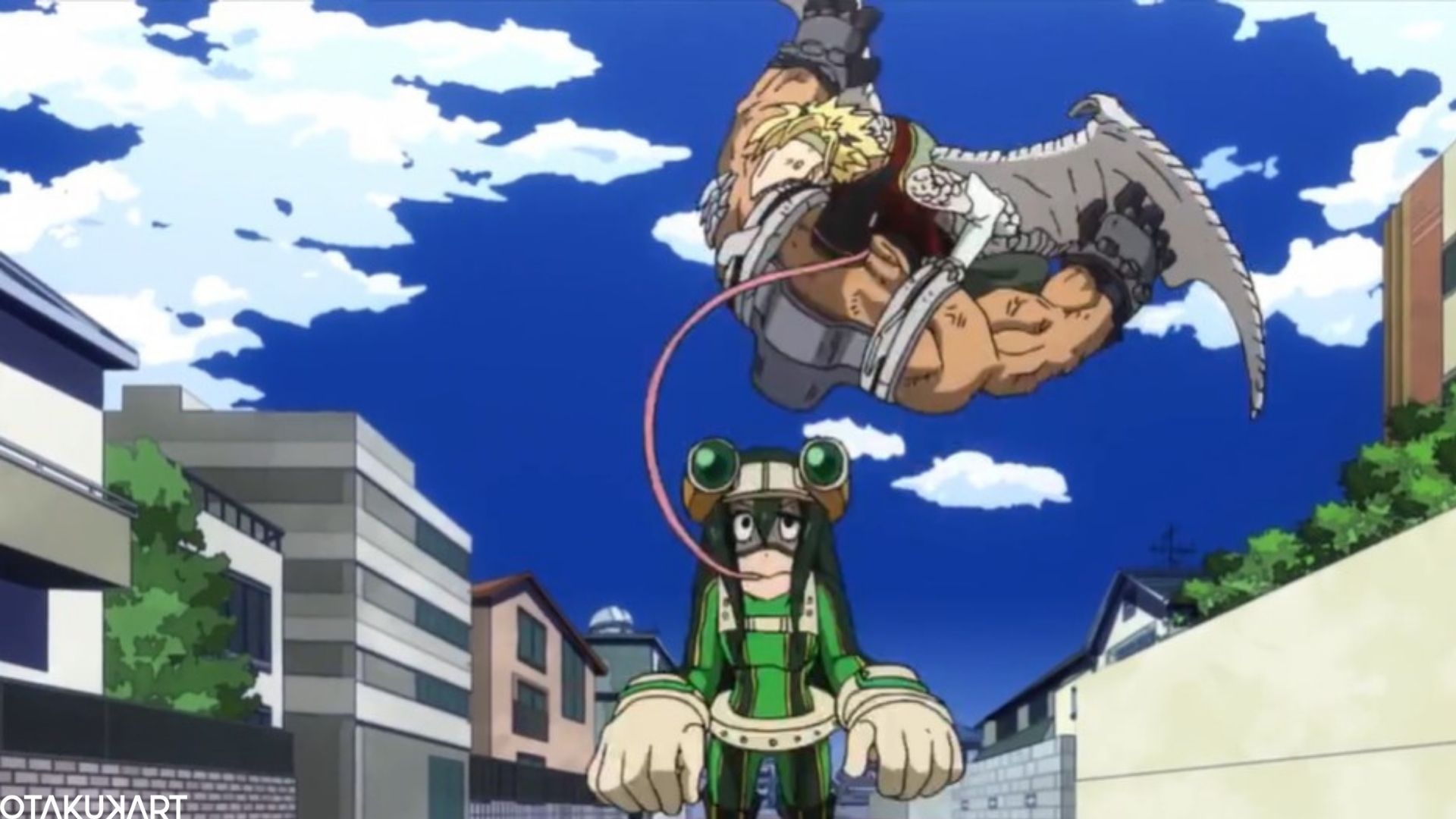 Tsuyu and her tongue and Kosei

Did the heading sound weird? Pardon for the confusion, but it’s just so hilarious when Tsuyu wrapped her tongue on Kosei. First, it was only to lock his hands, then the tongue got a hold of Kosei’s full-body, till his lower half.

Season 5 Episode 4 is when Tsuyu gets another one (Kosei) in her fan’s line. Not exactly, but I bet even Kosei couldn’t resist her charm. The first round of the Joint Battle Training (Class 1-A Vs Class 1-B) Tsuyu, Kirishima, Kaminari, and Koda battles against Ibara, Kosei, Hiryu, Shishida, and Shinso. While they have to lock the captured in a cell, Tsuyu wraps her tongue all over Kosei. As iconic as Froppy, isn’t it? 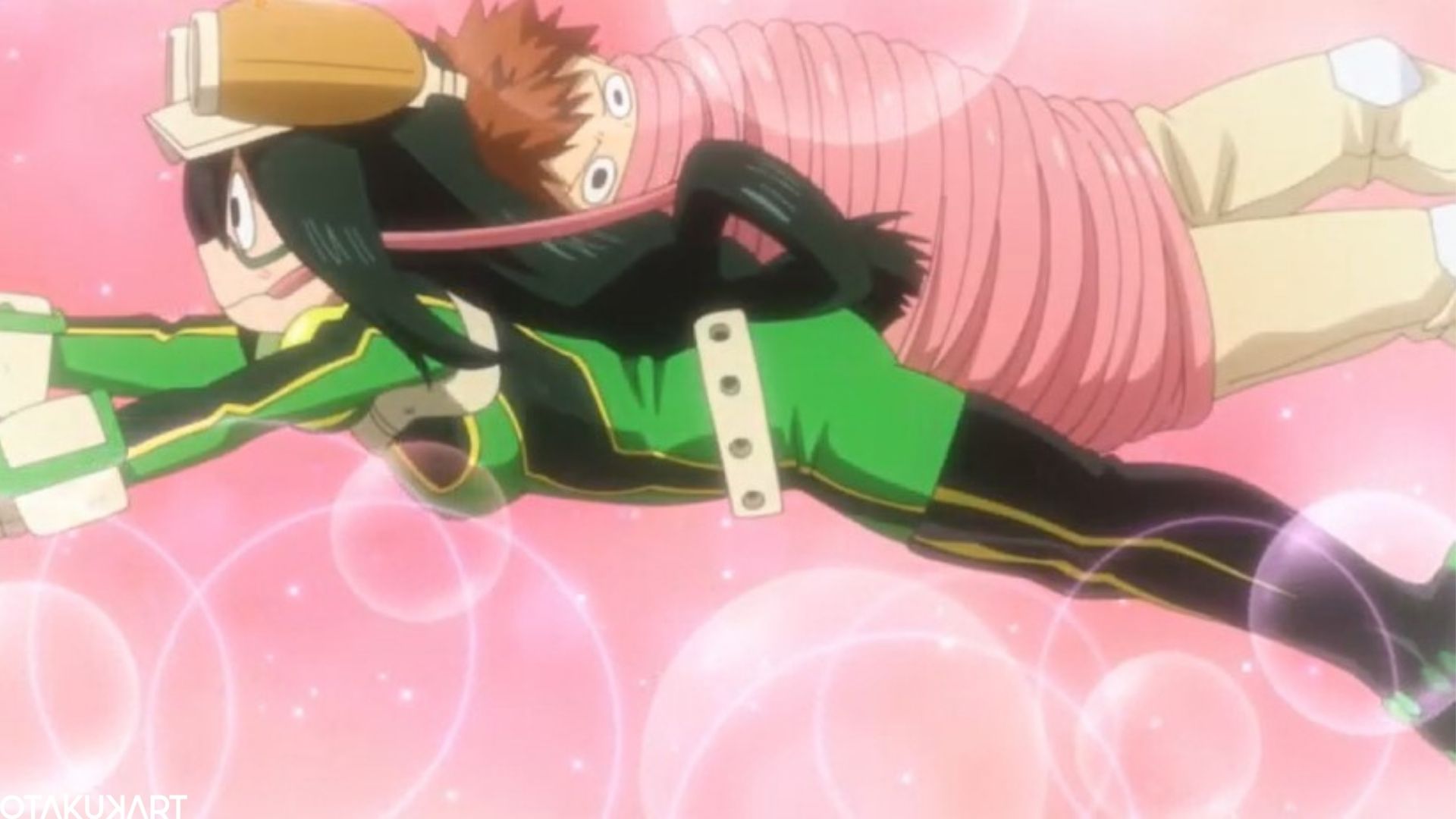