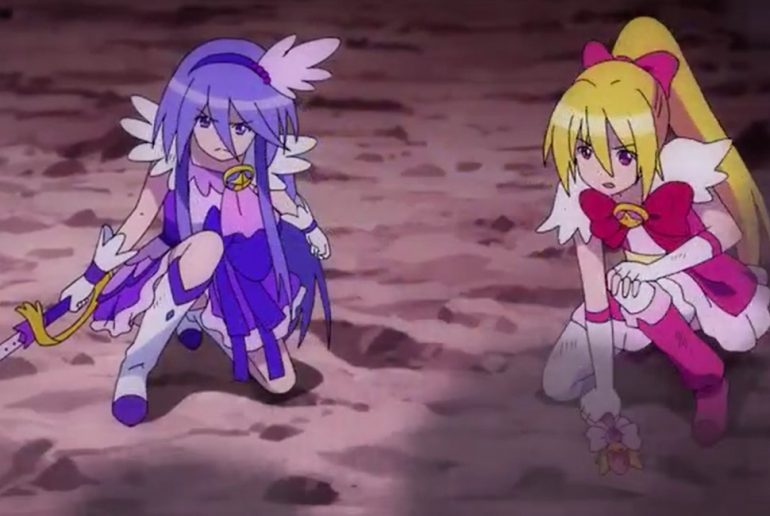 Let’s take a look at the latest development of the episode finale of this Anime. Majiha Pink and Majiha Purple are clashing with the Dark Lord at the sandy village. He attacks the two with Darkness Thunder that blast the sand away. The Dark Lord told them that there is no light of hope remaining for them. After a powerful blast when everything is clear Pink notices that Purple and the other two are captured inside the Dark Lord cannon powers.

Basashi and Gyuusashi have also captured the Dark Lord ask Pink if she wishes to continue the battle. The Dak Lord reveals that he is the Demon King Lukifile who will rule the world with the darkness of despair. He reveals that it is the beginning of the darkest of nights, in which he will suck up the dreams of all children around the world. While he is busy with hahaha evil laugh Pink replies that she won’t give up.

I’m Standing on a Million Lives Episode 12 will be released on Friday, 18 December 2020 at 10:00 PM JST. This Anime will release its new episode every Friday make sure to watch out for the upcoming episode spoilers. Watch this Anime officially on Crunchyroll. Allow me to take you to the recap and Anime’s preview below.

Previously on I’m Standing on a Million Lives Episode 11

Pink get s up and said Majiha sisters never give up then her body started glowing with pink magic powers. Purple lands her some powers since she can’t move all of sudden Pink emerges with new looks of a butterfly girl. She yells to the Demon King Lukifile that she believes in love. She then unleashes Crismon power and burns the Demon King with Majiha fire.

The Demon King vanished instantly after the blast, love, and friendship are what makes them stronger. Meanwhile, at the Snow mountains, Yuka realizes that she used to be the fans of Majiha Sister. She believes that if she possesses those powers she would have been the strongest girl in the world and protect everyone. She builds a snow cave and hides there to avoid freezing to death she also had a flashback about her past.

She used to be the weakest girl at her school and she got protected by hanging out with stronger people. She also remembers how she used two switch sides hanging out with different powerful people and picks the ones that are dominating. They ended betraying her but she thinks that she can’t blame them for their actions.

Yuka thinks that she can’t be a magical girl of love and hope meanwhile, Yotsuya manages to revive after falling inside the pit earlier. He started asking himself where he is since he knew that everything was over when he was falling. He then finds out that he is inside the secret dungeon.

The tunnel eater shows up and started to chase him while Yuka was about to die and she got save by a lady who carries her to safety. Later the crew met with the gamemaster and they can’t believe that they are all alive. The gamemasters reveal their next mission and they all got leveled up and receive the powers of Majiha Knights.

For today that’s what the preview and latest development have to offer. New updates about this Anime will be available next week Friday.