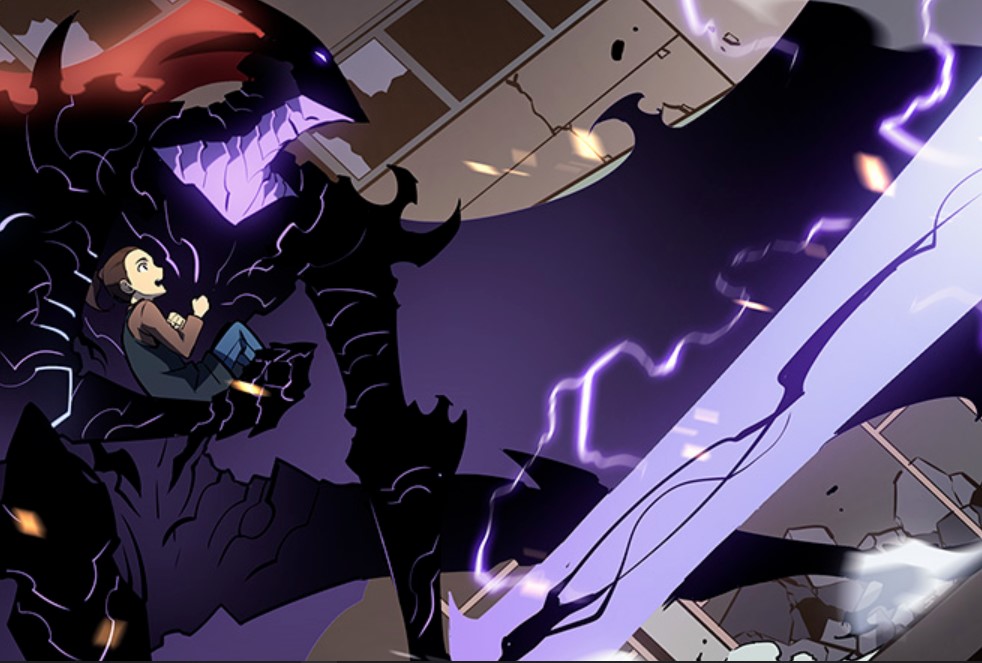 The S-Rank Sung Jin-Woo is Ahjin Guild Master, and D-Rank Yoo Jin-Ho is Ahjin Vice -Guild Master is on a trip to Japan. In Japan, the monsters destroy everything devouring humans, and the soldiers are trying to stop them with all of their efforts. Many lives have been lost after a long battle and powerful explosives, and some have served severe injuries. The soldiers are carrying the injured ones to safety, and they find that no space can fit other injured civilians.

They wanted to leave them behind. Two doctors said they couldn’t leave their patients behind, and they decided that they rather stay and die with them. One of their doctors said that it is their duty to take care of patients. The captain of soldiers said that it is also their duty to protect the civilians. He decided that they are also staying back, and they better die fighting. The monsters continue to attack and overpowering human strength.

Solo Leveling Season 2 Chapter 135 will be released on Thursday, 15 January 2021. New updates and chapters of this Manga are available every Thursday. You can get the latest updates of the previous chapter using the following link Solo Leveling Season 2, Chapter 134. The next chapter’s spoilers are not yet available; you can look at the following recap and ways to read this Manga below.

The Japanese soldiers notice that the patients cannot move, and they fight with the monsters while protecting them. Captain comments that he can run away knowing that civilians are remaining. They decided to find a place to hide inside, waiting for the hero to show up. Suddenly a giant, powerful monster appears in front of them, and the captain orders them to shoot. They started firing, but the bullets were bouncing back without harming.

When the monsters wanted to sweep all of them with a single slap, surprisingly, it just falls on its back, and the soldiers are won during what has hit the monster. Other monsters are surprised who took down that monster in a single blow without fear. They find that the S-Rank Sung Jin-Woo is Ahjin Guild Master, and D-Rank Yoo Jin-Ho is Ahjin Vice -Guild Master. Sung Jin-Woo looks at the monsters, saying it is dangerous and better moving here since it is near the hospital.

Yoo Jin-Ho started to help to evacuate the civilians. Sung gets ready to deal with the monsters that are showing up in numbers. He tells Sung that he will be helping with the evacuation, and Sung agrees, showing signs that he will have to deal with the threats in front of him. Sung powers up and started taking down the giant monsters, and he started by defeating a giant monster trying to act tough.

The monster showed off his muscles with smiles thinking that Sung is just like an infant to him. That monster just got hit by a powerful blow that put it to sleep in an instant. Sung Jin-Woo summons his shadow monsters to help him take care of other weak and mid-strong monsters. He draws his sword outflowing with magic powers and cuts one giant into two halves. In United States East Maryland, they find that Hunter Sung Jin-Woo went to Japan.

One hunter said that he heard that Lady Selner hasn’t even released a single level of Sung’s powers. They think that Sung might die because he is clashing with those powerful giant monsters since no single level; has been released. The trio reveals that Selner has upgraded their powers by wondering why Sung is fighting without his upgraded fighter. They think that he should have done sone snd he must that his abilities are limited as an ordinary hunter.

One of them is not worried since he realizes that Sung is the reawakened one. The third guy said that Sung is just getting carried away with his strength. All hunters that overestimate themselves are bound to get killed. The trio is just jealous that they are not the ones dealing with the monsters in Japan. They want to surpass Sung since he is growing stronger day by day. The other one said he is betting his Yacht that Sung won’t make it; he will die in a day.

The other said he is offering his house as a bet that Sung will die within two days. One of them sitting nearby asks them if they are sure about what they are talking about. The guy said he is betting his scavenger guild’s building that Sung will survive. They both changed the topic and said they should focus on the S-Tier Gate that spawned on their side. One of them reveals that the dungeon break is tomorrow, and he is wondering how many of them will survive.

The bold head hunter looks at that guy who bet that Sung will survive. In his mind, he said this guy is an expert in spoiling others’ moods. The guy who spoils the mood thinks that he should have been in Japan with Sung. It would have been fun for him rather than remaining here in the U.S he thinks that maybe her things will be fun tomorrow.

When they are still talking, a sign that a gate is about to open shows up. Meanwhile, in Japan, the reporters can’t believe that Sung’s summons is taking down the giants with ease. Bugs are devouring the giants. Sung protected a little girl who was about to be eaten by a giant monster.