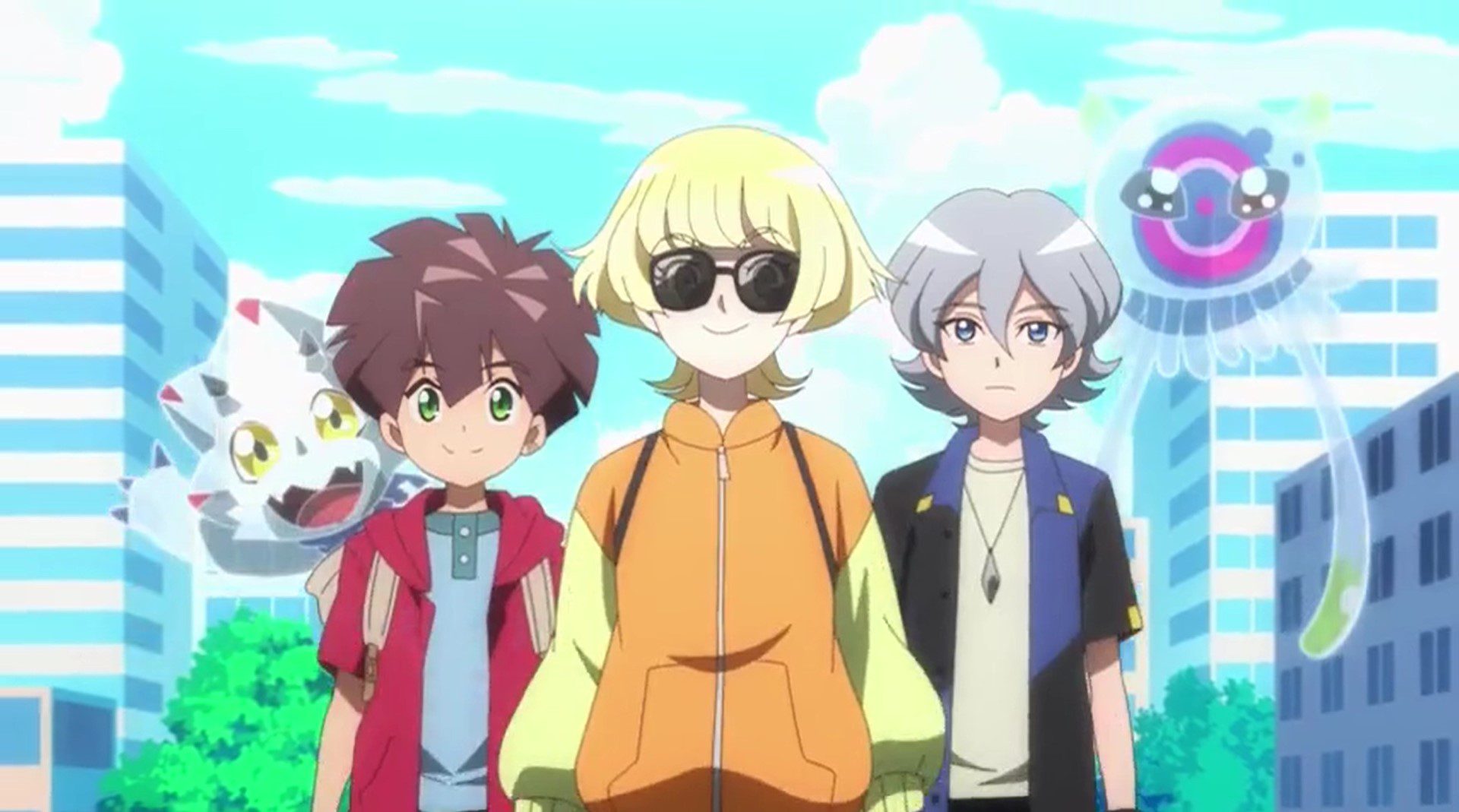 Digimon Ghost Game Episode 44 is set to release this weekend. Animated based on Digimon, Digimon Ghost Game is a Japanese anime series that premieres on Fuji TV on October 3, 2021. The opening theme is “FACTION” by Wienners. The show is aimed at children but is enjoyed by both young adults and adults. A mysterious device was left to Hiro by his father, and the show explains how he uses it to solve the mystery.

It is not commonplace for ghosts to age faster, images defaced by strangers to match real-world disappearances, and weird events to be recorded on the internet throughout the show’s universe. With his Digivice, he can communicate with those spreading the rumors and see them. It is a simple show that can be enjoyed by all ages since cute, animal-like creatures speak entertainingly. With the help of Gammamon and his friends, Hiro searches for and stops Digimon from causing havoc in the real world.

This is another one of Ghost Game’s best episodes, just because the horror beats are so well done. This is an episode that leans heavily on psychological horror, and it does so wonderfully. It seems that the person in the Cold-Open looks very similar to the researcher in Episode 23. The researcher’s room, hairstyle, hair color, and build are all pretty close to the person in the Cold-Open.

What gives me pause, however, is that their hair length, glasses, voice, and especially eye color are very different from the researcher’s. We can easily explain away the first three: they might have changed their hairstyles, and their glasses, and their voices might be sore and deeper due to exhaustion, but their eye color is pretty clear evidence that they are not the same people. 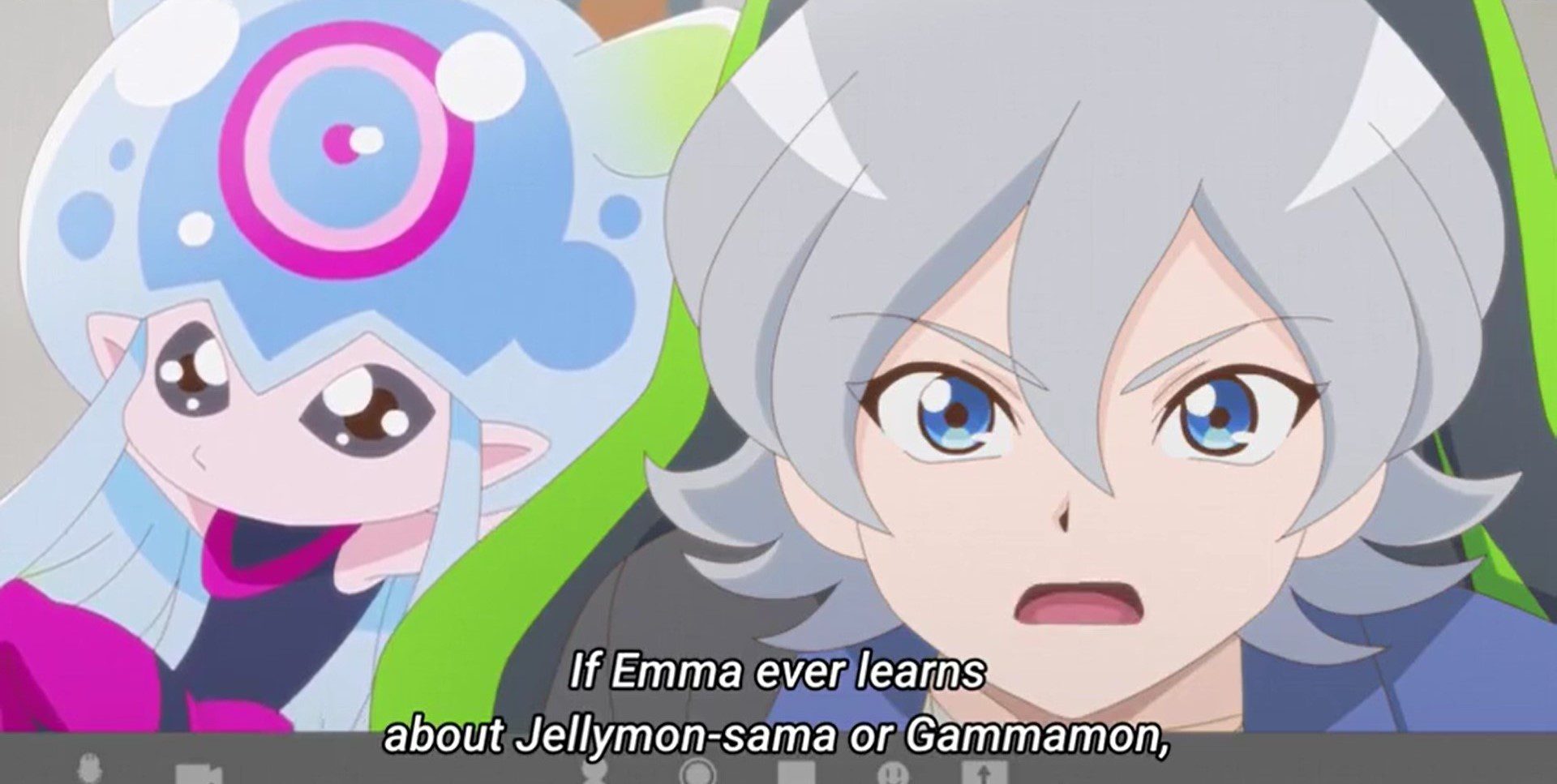 The two can’t be one if the two are wearing contact lenses or if the character designers changed the color of their eyes, but this does make it pretty likely that this person isn’t the researcher. Nevertheless, even if it isn’t them, I still believe the researcher will still appear at some point in the future. We’ll have to wait and see what happens next.

I liked the animation in this episode. That chilling intro would have fit right in with any psychological horror anime. I enjoyed how the sequence alternated between depicting Emma’s condition and discussing the rumor, making the scene even more terrifying. The Eyesmon themselves were terrifying as they stalked Emma. 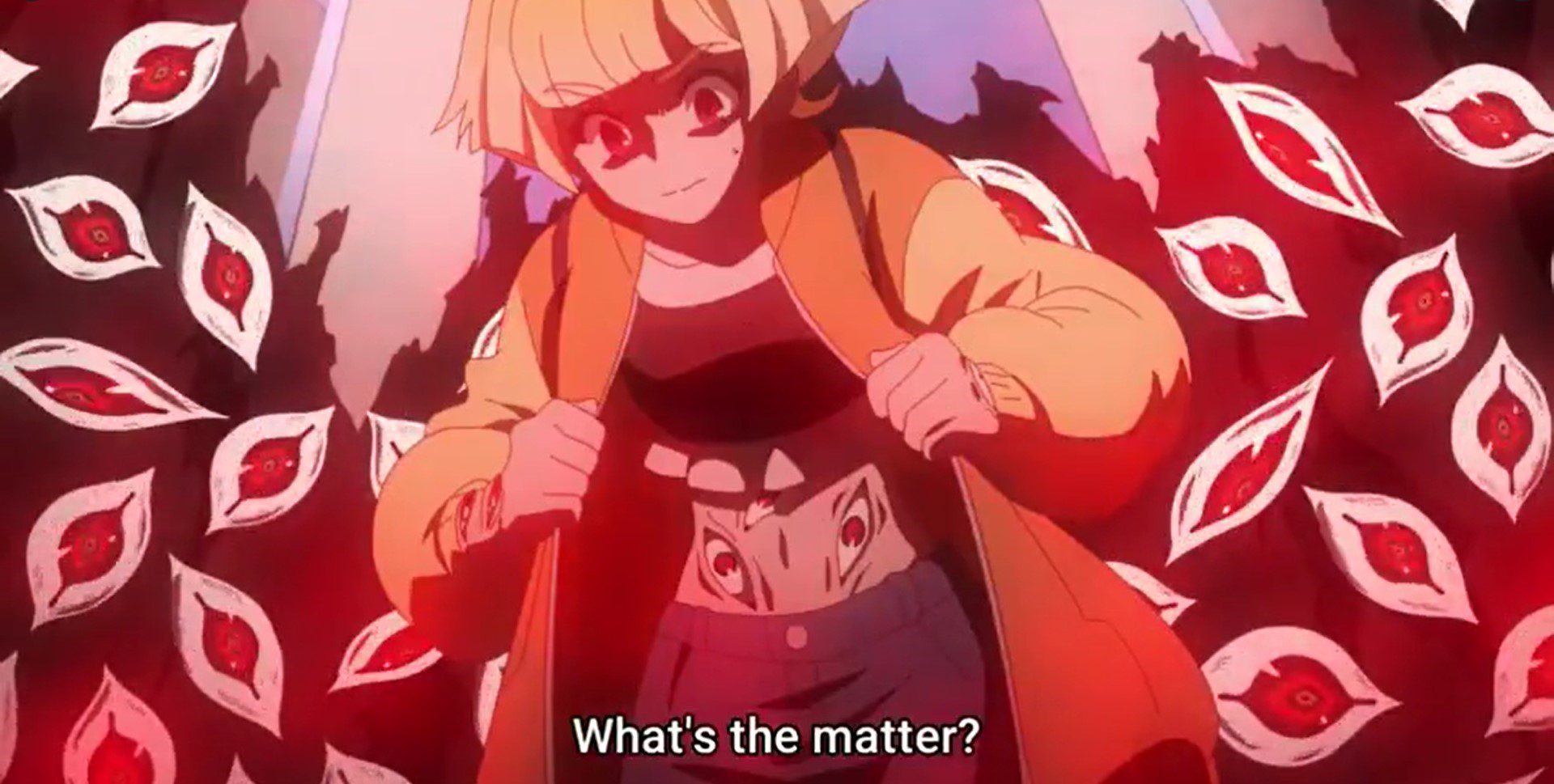 The animation in this episode was incredible, and it truly contributed to the dread. The way they drew Emma’s eyes out and encircled her in the bathroom stall, provoking her to investigate and learn more about Kiyoshiro, was extremely frightening. Kiyoshiro is also becoming more daring in this episode.

We witness snippets when he is much bolder than he was previously. I like how he isn’t afraid to push Jellymon-sama. I also appreciate that they showed him using deep breathing to calm himself down so he would be able to ask the others for help and face the treat, and I also appreciate how Jellymon-sama’s gentle interference helped him to get over his anxiousness. 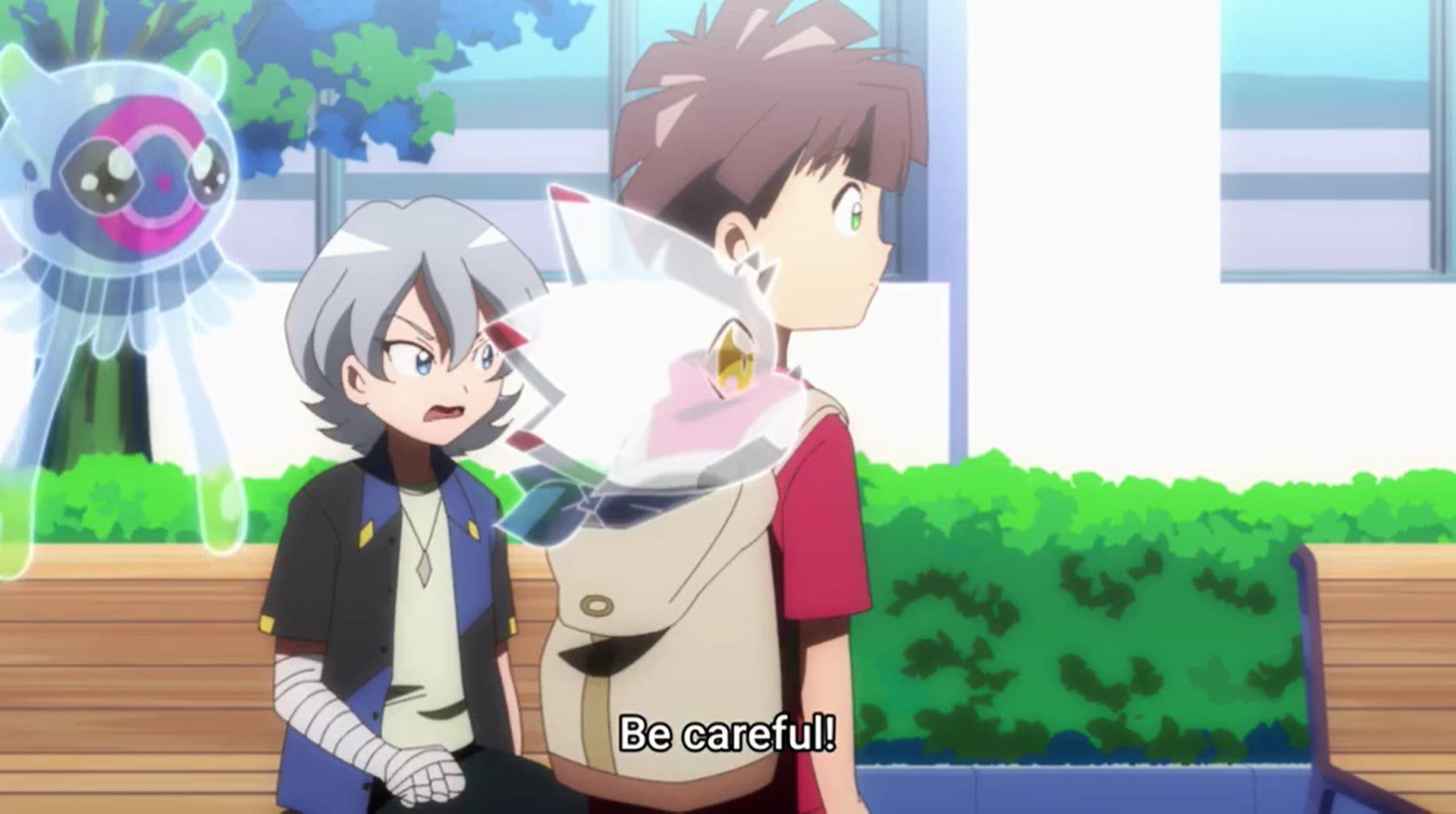 I’m amazed by how far this episode goes with the ideas it wishes to explore, even though it’s not clearly stated in the episode. It was unsettling to see Emma grin gleefully at the sewing kit as she prepared to self-mutilate; it is clear that this entire event has caused her so much stress that she considers potentially injuring herself a pleasurable experience. It will be interesting to see how graphic Ghost Game will be.

While standards differ across countries, I think Ghost Game might be able to get away with showing blood somewhat liberally if Steven Universe was able to do so. I think that Ghost Game will also make it explicit that the red liquid in the cold open was blood in Episode 25, but I’m curious to see if Ghost Game will do so.

My favorite thing about Emma is that she is quite charming, and though she probably needs to learn to value others’ boundaries more, she is quite affable herself. However, I do think it’s important to point out that kissing someone without their consent should be condemned. She is the first non-Team Lirurun person to discover Digimon (besides Kazuma and probably the other kids in Episode 17). They most certainly informed Yuto (and Kayono) the truth as well, but she is the first person we know is aware of Digimon.

In other words, she is one of Team Lirurun’s few “in the know” human allies. I’m curious when Aoi and Mika will be brought in. It’d be fantastic to meet her again soon, and I hope Team Lirurun continues to attract human allies in the future. In addition to Team Lirurun’s existing Digimon companions, certain human allies would emphasize the notion of “bridging the human and Digimon worlds.” 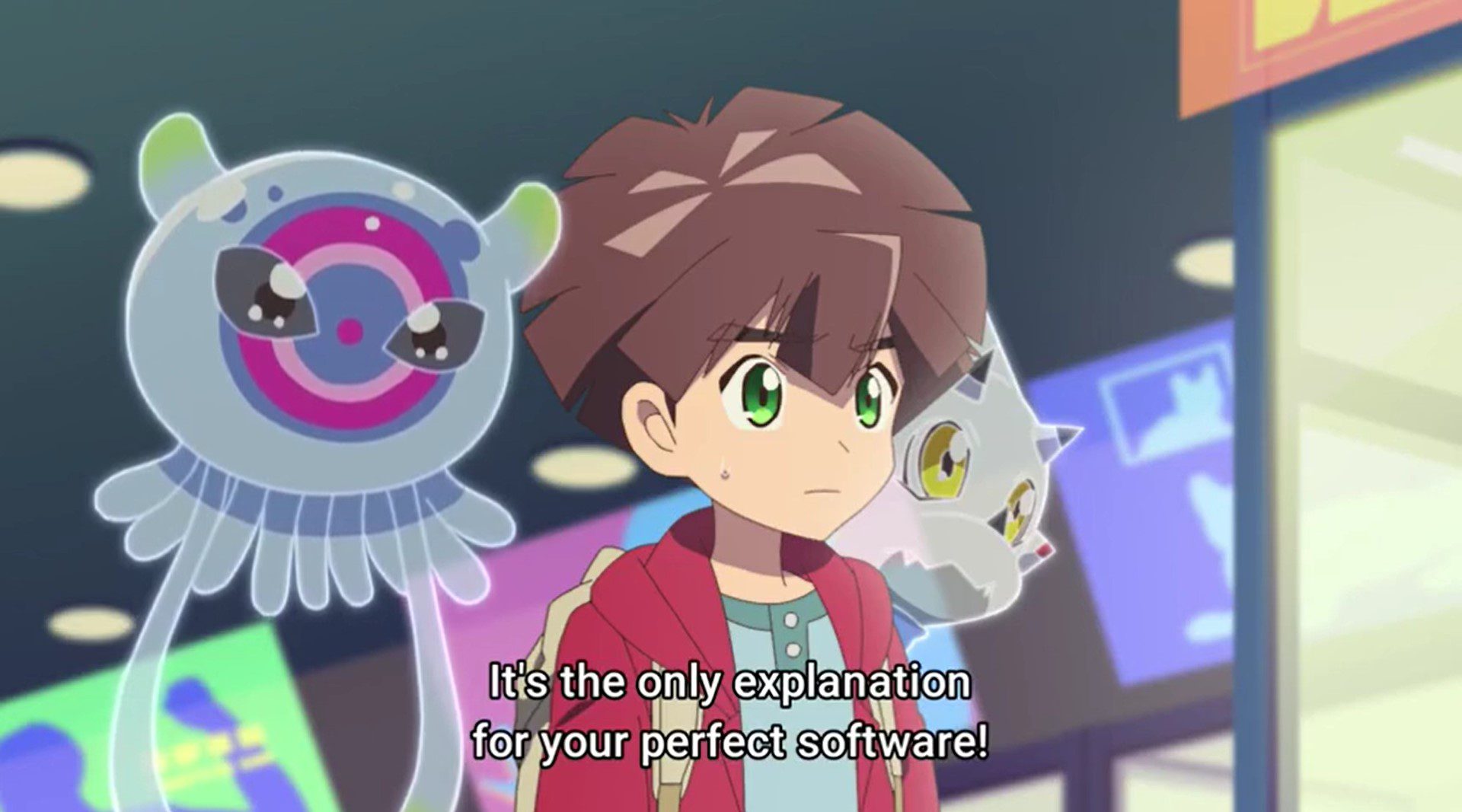 In the upcoming episode, Gammamon and Hiro look to be fully immersed in their study. It’s really rather exciting, because Hiro doing investigations is always entertaining, and I have no clue what will happen in the next episode, so I’m looking forward to it. Furthermore, I’m not sure if the liquid is blood or just water with rust: it may be the latter, but we’ll have to wait and see!

Fans can watch Digimon Ghost Game Episode 44 on Crunchyroll when it is released as well as all episodes of the anime series.

Also Read: How Old Is Pudding From One Piece? All To Know About Her