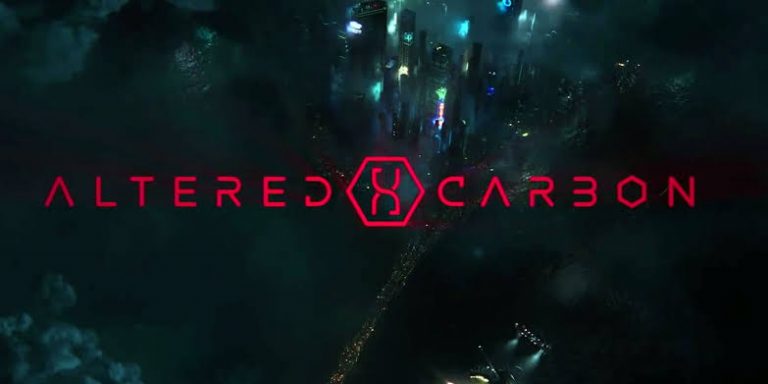 Altered Carbon Season 3 would be a sequel of ‘Altered Carbon’ which is a cyberpunk TV series that is created by Laeta Kalogridis. It is based on a novel of the same title by English author by the name of Richard K. Morgan in 2002. Netflix ordered the series in January 2016 and its budget was so insane that is said to be one of Netflix’s most expensive shows. Furthermore, it is said that it had a bigger budget than the first three seasons of Game of Thrones.

The shooting for the show has happened at a lot of great places like  Vancouver, British Columbia, Canada. Laurens Bancroft’s gardens were filmed at the University of British Columbia Rose Garden. The lobby of the Marine Building was Bancroft’s home. Furthermore, Convention Centre’s West Building, the visitor center at VanDusen Botanical Garden, the UBC Museum of Anthropology and The Qube. This just shows how much money was put into making this.

It’s first season release on 2 February 2018 on Netflix and it had a total of 10 episodes. Afterward, the show was renewed for a second season in June of 2018 and it will have a total of 8 episodes. The second season released recently and what’s more that it has some pretty good reviews. Now that the season second as ended, the fans of the series want to know whether they will be getting another season of the show.

Altered Carbon Season 3 will be released in February 2021 if it is renewed. This is just a prediction and nothing has been confirmed yet by Netflix. If there is any news on Altered Carbon then we will keep you up-to-date with it.

The episode count of the third is yet to be revealed by Netflix but there is a possibility that the third season will have 8 episodes like the second season.

Unfortunately, there is a trailer for the third season of Altered Carbon right now but you can check the trailers for the other two seasons on YouTube in order to make up for it.

You can, however, watch Altered Carbon: Resleeved Trailer:

Altered Carbon Season 3: Will It Happen?

If it does meet these two requirements then the renewal will mostly be happening if now then say goodbye to Altered Carbon. The third season as told early hasn’t been announced but we might be getting the announcement in July of 2020 because all of the previous season’s announcements were made in July.

As for the plot, the story of the show is set in the future where consciousness is digitized and stored in cortical stacks, then implanted into the spine of human in order to survive death by having their memories as well as consciousness “re-sleeved” into new bodies. Afterward, we follow the story of a trained “Envoy” soldier named Takeshi Kovacs, who has been downloaded from an off-world prison and into a combat-ready sleeve to do the bidding of a highly influential aristocrat named Laurens Bancroft.

He (Bancroft) was killed but was later back up his stack which was made a few hours before his death. This left him with no memory of who killed him and why. The police said that it was a suicide but Bancroft thinks otherwise. He thinks he was and wants Kovacs to find out what really happened to him. The premises of this show is really interesting and the first two seasons’ story was great too. Right now, the story details of the third season haven’t been announced but we might be getting some details on it in the future.

The cast of the show consists of, Joel Kinnaman as Takeshi Kovacs, who is a former Envoy that is an elite rebel group defeated 250 years prior to the start of the series. James Purefoy as Laurens Bancroft who is one of the wealthiest men alive. Martha Higareda as Kristin Ortega who is a smart and also tough lieutenant in the Bay City Police Department. Chris Conner as Edgar Poe who is artificial intelligence (AI). It runs the hotel which serves as Kovacs’ base of operations in Bay City.

Dichen Lachman as Reileen Kawahara. Ato Essandoh as Vernon Elliot, a former Protectorate marine whose wife was imprisoned and daughter murdered. Kristin Lehman as Miriam Bancroft, Laurens’ wife who has her own motivations. Trieu Tran as Mister Leung / Ghostwalker as a killer and “fixer” who kills and solves problems for a mysterious employer.

Renée Elise Goldsberry as Quellcrist Falconer is a “master strategist” and leader of the Envoys. Simone Missick as Trepp, Dina Shihabi as Dig 301, Torben Liebrecht as Colonel Ivan Carrera, James Saito as Tanaseda Hideki and Lela Loren as Danica Harlan. The cast of the third season hasn’t been revealed and most likely we will see many new faces in it.

Altered Carbon season 3 hasn’t been given the green light at this point, yet we’d expect the streaming giant Netflix to uncover its future inevitably. Netflix ordinarily chooses the destiny of its shows in one month, and we’re currently well past that period.

The show is based on the novel by Richard K. Morgan, Netflix’s cyberpunk series Altered Carbon took years to see the story on a screen. Be that as it may, with its huge enormous locked and stacked, permitting the arrangement’s group to go all out with science fiction madness, Altered Carbon, at last, appeared on Netflix with a 10 episode first season in February 2018. Watchers immediately discovered that the show, set in a substitute reality in which people have figured out how to digitize their cognizance, was certainly justified regardless of the pause, and the spilling Netflix similarly as quickly announced Altered Carbon for a second season just a couple of months after the first season debut. Altered Carbon season 2 aired on Netflix in February 2020, and from that point forward, fans have pondered about the possibilities of an Altered Carbon season 3.

Unfortunately, Altered Carbon Season 3 has yet to be confirmed. There’s been no official declaration from Netflix about Altered Carbon Season 3, yet we’re expecting a major approval from the streaming giant after the positive reaction to Season 2. Netflix first reported show’s Season 2 in July 2018, five months after season one debut in February of 2018. Try not to be amazed if there’s a comparable hold up this time around.