To see your life turning into something that is unconventional, maybe something no one ever expected to look out for, is the most mindblowing thing that can happen to a person. But what if the very same changes push a person into a path that is dangerous and potentially harmful to their own well-being?

The same is the story of a high school teacher who, after encountering a major change in his life, turns to a life of bad and crimes because he wants to fulfill his duty of protecting his family. But what he doesn’t realize is that this life filled with crime, illegal activities, and danger is a threat in itself, not just for him but also for the people around him.

Breaking Bad is an American drama that is one of the most watched and loved criminal dramas even today. The show was first aired in January 2008, and the show took out to gain huge popularity from the very first season. The show was renewed for a total of five seasons, each one adding to the thrill and the adventure present in the show. The last season premiered in September 2013. The show is created by Vince Gilligan, and he has been synonymous with the show ever since. The show stars Bryan Cranston, Anna Gunn, Aaron Paul, Dean Norris, and Betsy Brandt. The show is based on neo-western themes, giving a sense of edge and roughness in many aspects.

The show is hot in Alberquerque, New Mexico, as the show is also based in the same place. Many people consider being the perfect place to shoot the show, as it is dry and dusty, like the actual lives of the characters. The show can be viewed as a tragedy than just be referred to as a crime show. The show also offers a spectrum of comical moments and humourous punchlines throughout.

Also Read: What Episode Does Andrea Die In Breaking Bad?

A brief synopsis of the show

Thee follows the story of a high school teacher named Walter White, who is shown to be devasted to know the fact that he is diagnosed with stage III lung cancer and there are fewer chances of his survival from this terminal disease. He is hopeless, knowing that he will not be able to provide for his family nor pay for his treatment and finding that his salary as a chemistry teacher is not sufficient to cover his family posts his death. 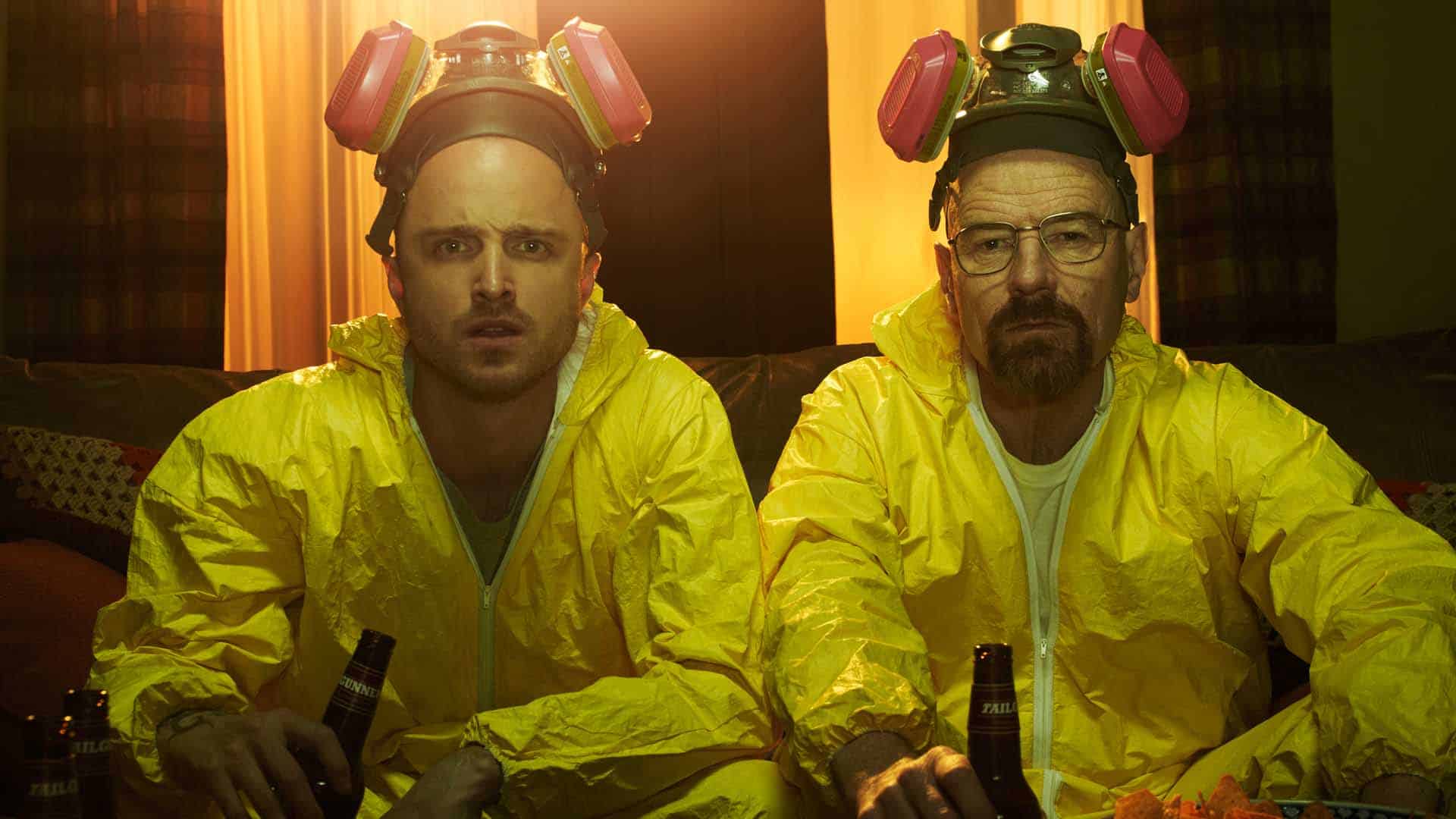 Walter and Jesse in Breaking Bad

In the desperation to protect his financial interest, he uses his extensive knowledge of science and chemistry to create meth, a type of drug, and starts selling it to a drug lord named Tuco. He joins forces with one of his former students named, Jesse Pinkman, who becomes his perfect partner in crime.

They started by creating smaller and sufficient batches of meth that they sold locally, but as the demand started to rise along with their work, they started to expand. They now create meth in huge batches and slowly find a way to the underground from where there is no way out.

He takes up the alias named “Heisenberg” to avoid any identification and to mask his true identity. But as he delves deeper into the work, he finds himself in more graver danger from where he can no longer get out. His wife also finds out about his illegal activities and, out of anger, divorces him to keep herself away from any illegal actions.

By the end of the finale episode, he dies in his own meth lab alongside Jesse, who leaves him to die.

Also, Read 39 Crime Genre Movies That Are Based On Actual Crimes!

In what episode does Tuco die?

Tuco is a frug-distributor and also a highly regarded kingpin who has major control in the drug trafficking industry. The role of the dangerous drug lord is played by Raymond Cruz. His role in the show breaking bas was particularly short as he first appeared in the mid of season 1 and was killed off in season 2 itself.

But along the same timeline, he is one of the most major roles in Breaking Bad’s spin-off show Better Call Saul. He is present in almost all seasons. He was killed in season two’s episode two that was titled “Grilled”.  He was murdered by one of the dealers that he used to work with, Dog Paulson.

The reason for killing him was not specified or given any major importance other than the fact that he was killed as they suspected his schemes in the double-dealing of the drugs and considered him to be involved in those.