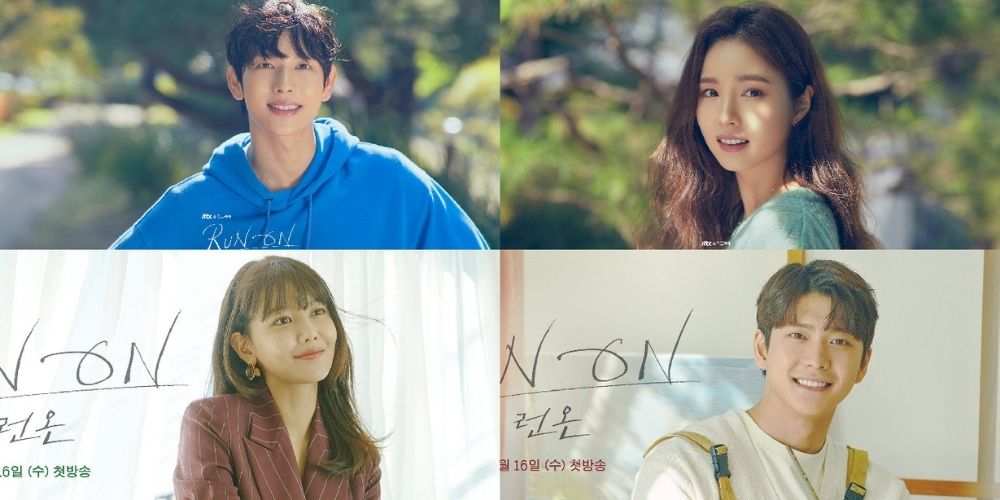 Run-on is a South Korean original Netflix series that has a romantic genre. The series is released in the year 2020. The series is based upon the life of a translator and an ex-national sprinter. It talks about how they fell in love and how things grew with time. The genre of the series is sport and romantic. Being a Netflix original series, the drama isn’t available on Viu and Viki. Run On is still creating hype slowly and steadily. The plot of the drama is engaging yet bland at some points.

The IMDb rating for the drama is 7.8, while MyDramaList rated it 8.6. The rating of the drama has fluctuated, and the same goes for the audience reaction. The genre is romantic, sport and comedy. There are a total of 16 episodes with different runtimes. A single episode runs for around 1 hour 10 min. There is only one season till now, and there may not be any other season continuation.

The series is starring Im Si-Wan as (Ki Seon-Gyeom), Shin Se-Kyung as (Oh Mi-Joo), Sooyoung as (Seo Dan-A), Kang Tae-Oh as (Lee Yeong-Hwa). The plot revolves around their love story and the struggles they have to face during the entire relationship. The other important characters of the series are Lee Bong-Ryun as (CEO Park May), Lee Jeong-Ha as (Lee Jeong-Ha), Cha Hwa-Yeon as (Yook Ji-Woo), Ryu Abel as (Ki Eun-Bi), and Park Young-Gyu as (Assemblyman Ki Jeong-Do. These people have an important role and emphasis on the complete plot. There are other casts, too, who play an important role to put out the series together and built the plot.

The drama Run On revolves around Ki Sun Gyeom, who is a sports agent.  He once was a popular sprinter of a national team. He dropped out of the team due to some legal issues. The drama introduces Oh Min Joo, who works as a translator of subtitles. She started with the career because she liked how her name flashed at the beginning of the movie. She has a keen interest in collecting fake guns. Oh Min Joo and Ki Sun Gyeom have crossed each other paths many times, and this turns out to be a fate for them.

The drama has another main character Seo Dan Ah who is the president of a sports agency and the successor of the Seomyung group. Being a woman, she had to face many hurdles related to gender role play and norms in society. There is another important character Lee Young Hwa who is a university art major and enjoys painting. He enters the life of Seo Dan Ah, and they are both connected. Now the plot takes some shocking terms in everyone’s life, and that is what you have to explore while watching the drama. The love story blooms, or it gets doom.

The plot revolves around Ki Sun Gyeom, who is a well-known sprinter of a national team. Ki Sun Gyeom is popular and comes from a wealthy family. His mother Yook Ji-Woo, is a popular actress who is cherished by most people.  He has his only focus on sport and how he can improve his skills over time. Oh, Min Joo is a translator who translated many movies. The thing which motivates her to translate the movie is her name on the credit screen. She is a hardworking independent woman with high self-esteem.

Oh Min Joo and Sun Gyeom crossed each other paths many a time. He first saw her during the live radio interview where she was hyping up Yook Ji-Woo as she is her ideal. They encounter each other after an office party where she was humiliated by her professor Hwang Guk-Geon. He made a scene insulting Oh Min Joo on a gender basis which turns out to be ugly for both of them. She insults the professor in anger as she was devastated by the mean comments. This made the professor angry. She left the party while going back, she tripped on Sun Gyeom.

Being followed by her Ex Oh Min Joo turns out to be angry, and to save her from her ex-Sun Gyeom pulled a fake gun on the head of Han Seok-Won. They encountered again when Min Joo was almost con by a person who was selling her a fake gun. The person took the gun and ran away with the money he got in exchange. Min Joo was lucky as Sun Gyeom was there to help her he trip the guy by throwing the art cylinder of Lee Yeong-Hwa.

Fighting with Professor Min Joo was tense as the professor took away an important opportunity of translating a movie. This makes her lower her self-esteem and apologies to the professor. Min Joo was taken aback when the professor asked her to work as a translator for an athlete if she wants to get her work back. Keeping her ego aside, she decides to follow what the professor says. Meanwhile, Sun Gyeom came across the bullies who use to beat Kim Woo-sik in the name of discipline. He vented out his anger when he found how brutally they beat him just because he has not run for the errands they ordered him to.

He assaulted the culprits and asked the institution to take a series of actions and came across the fact that the authorities were well aware of the bullying going on the campus. After this incident, he decides to leave the national team. He decided to drop out of everything. Sun Gyeom was managed by Seo Dan Ah, who is the president of a sports agency and the successor of the Seomyung group.

Accidentally the person whom Oh Min Joo has to assist for translation was Sun Gyeom. They both start having a strong bonging of friendship which turns out to be love. There is another love angle between Seo Dan Ah and Lee Young Hwa, who is a student and a painter too. She got attracted to her painting first, and then they turn out to like each other and fall in love. The journey of love was quite difficult in this case as she has a position to hold onto.

The drama Run On has different turns, up and down. It is also seen how the father of Sun Gyeom uses his children to win the elections by creating a false scandal. The phase of Seo Dan Ah’s life is also seen in how she has tackled her family issues and hold onto the position she deserved. The life problem of each character is portrayed. There is a slight light on unrequited gay love, which wasn’t fulfilled, but he was satisfied. Also how Kim Woo-sik grows to be more powerful and confident and achieves his grandmother’s dream of being a sprinter. The plot has different turns, but it ends on a happy note where everyone got the love of their life and was happy.

Run On is a romantic drama with some heavy emotions flowing throughout the plot. There is a simple love story with hardships and obstacles and how everybody tackles them. The drama is fresh with a little different plot. The love story is quite cliché, but the way it represents is out of the box. The drama turns out to be boring and dull at some point where the audience gets disconnect. The introduction of a new character may confuse at the beginning but will be clear with the running plot.

The drama is quite straightforward, with no love triangles and a typical repetitive story plot. It depends on the viewer what kind of love story he expects and wants to see. Overall the drama does end on a sweet note. The ending was quite impressive as it portrays how loving someone can turn the tables, and each of them can achieve what they wish for.

Personally, Kim Woo-sik’s growth is the best thing in the drama. The way he conquers his fear and inabilities and turns to be a more confident and powerful entity. There are different messages portray by the drama, like how a person can positively change your life. The change that came in Kim Woo-sik due to Sun Gyeom’s influence which turns him into a confident person, is an example. Also, the drama puts out a message if you seriously want to achieve something, you will just have to be constant and hardworking towards your goals.

The ending of the drama is positive, overall you can surely watch it one time, and you will gradually develop an interest.

Read: Korean Drama Jirisan: Everything You Need to Know