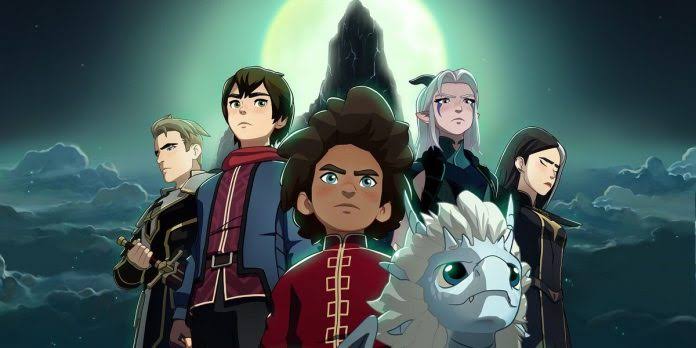 The Dragon Prince anime was a big success and the fan base for the anime is ever increasing. So, in order to keep the fans engaged in and around the series. The Dragon Prince will be getting three all-new books this year which is some very exciting news for its fans. In this post, I’ll be discussing The Dragon Prince three new books announcement. Before we begin, please note this post may contain official spoilers these upcoming new books of The Dragon Prince franchise. If being spoiled is not for you, I suggest that you stop reading the post here. However, if spoilers don’t bother you, we can get started. Also, note that we did not create the spoilers or leak them.

I will be discussing the details of these books one by one in the order that they are scheduled to be released. The first book that is to be released is known as ‘Callum’s Spellbook’. The writer of this book is Tracey West. Release date of the book is 03 March 2020 which is just a few days away. Total pages in the book are about 160. This book will show us fans the light-hearted side of The Dragon Prince magical world. Callum will be travelling to Xadia and noting down his experiences in a notebook. It’ll be certainly a fun experience to behold.

Last but not the least, the final book that has been announced is titled ‘Through the Moon’. Release date of this book is 15 September 2020. Peter Wartman is the writer of this graphic novel, while Xanthe Bouma is its illustrator. This one isn’t a filler story by any means but a canon one. This story takes place between the timeline of season 3 and season 4. All the books look pretty exciting and the fact all of them are coming out in 2020 is really pleasing. Do mention your thoughts regarding The Dragon Prince getting three new books in the comments section below.