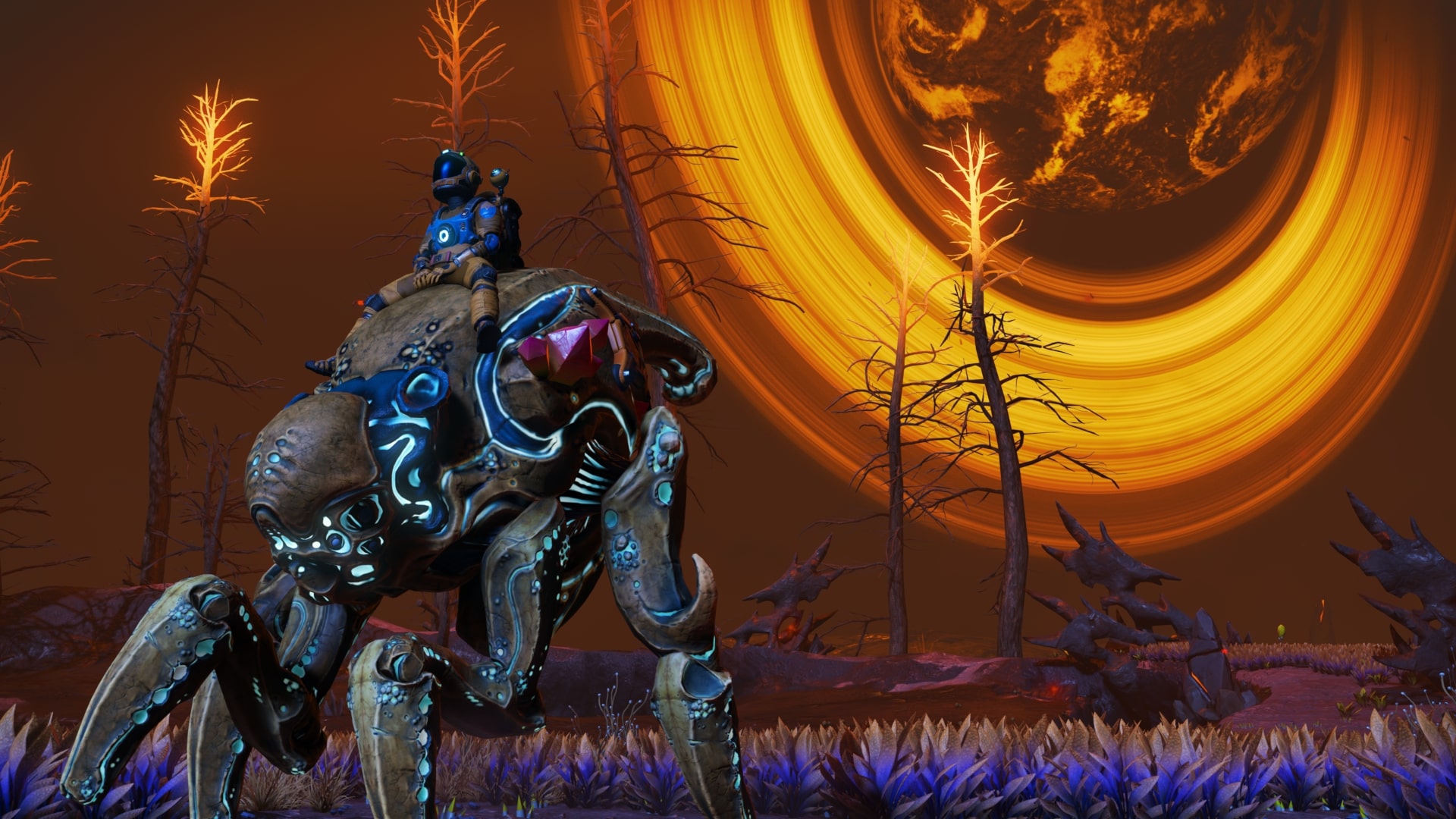 No Man’s Sky is gaming’s most remarkable comeback kid. From a terrible launch (of an incomplete game, too), developer Hello Games has more than made it up to their fans and new players alike. Several expansion-sized updates, such as NEXT, BEYOND, and ORIGINS, completely changed the gameplay mechanics and added extensively to world generation. Smaller updates like Crossplay and Desolation added questlines and functions the game didn’t have before. The latest of these, added in February 2021, is COMPANIONS, which allows the player character to do more with alien wildlife. Want a pet to come with you on your adventures? You can breed animals, genetically manipulate them to create creatures with desired traits, and trade creature eggs with other players. The expansion even lets you hear your companion’s thoughts and feelings through a neural link. It’s a fantastic update, so let’s look at it in more detail.

Were there any clues?

The last major update was No Man’s Sky Origins. This overhauled variety, appearance, planet generation; it introduced a whole host of gameplay elements and polished up the interface. After this came the Next Generation update, which improved graphics and rendering across the board. In what is now quintessential Hello Games style, the only clue we had of anything coming up with this cryptic tweet from Sean Murray, founder of Hello Games.

He’d tweeted an orange emoji for Origins (“orange” sounds a bit like the update name, if you’re forgiving). Here, though, yarn was just something cats liked playing with. We were getting pets! Animal companions. We could now put all the aliens, and people were excited. It turned out, though, that the update lets you do so much more.

The player can, once they meet a creature they like, interact with it (using the all-powerful Creature Pellets) and tame it. After adopting it as a pet and forming a close bond with them, by playing with them, feeding them, and giving them lots of affection, they can be summoned anywhere the player is. They can offer support to the player by providing light, scanning the surroundings for buildings, hunting and fighting hostile creatures, and even gathering resources using mounted mining lasers. Pets can even bring you to surprise gifts! 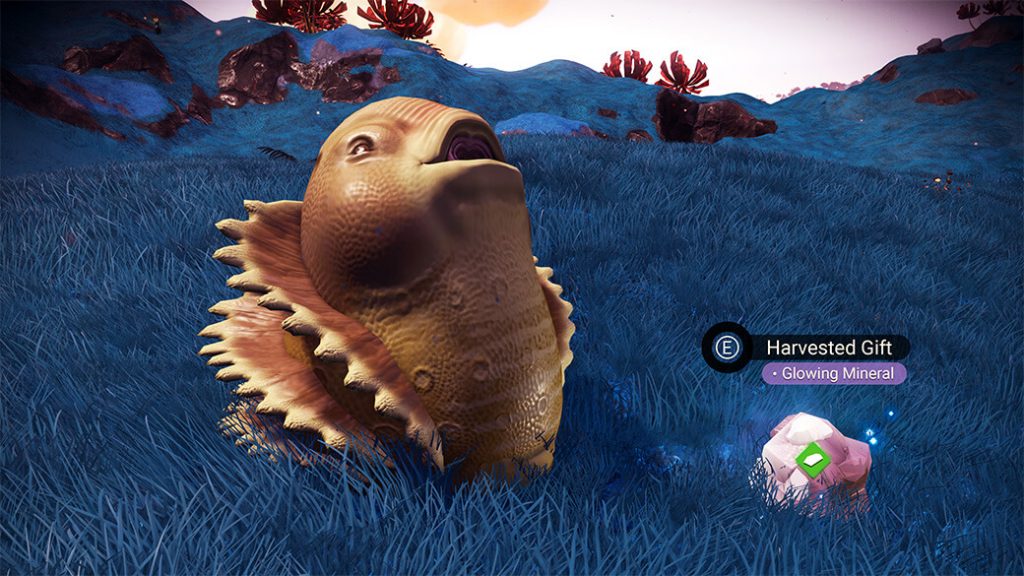 Shaped like a friend. Imagine bringing this little guy along!

If the player wants, they can connect their companion to their suit, providing a neural uplink that lets them hear their pets’ thoughts, feelings, and observations. Each one has a distinct temperament and personality, one inherited from their parents and shaped by their surroundings. It affects how they react to other animals and players. For example, aggressive pets are killing machines while devoted pets stay close to their owners. All these traits present on a spectrum, allowing for incredible variety among the creatures you’ll meet.

A well-maintained pet may lay eggs. These must be incubated before they hatch… into cute baby animals, which you must nurture until they grow to maturity. Players can also trade eggs with each other, if they are for rare and desirable creatures. They can also choose to tinker with the eggs aboard the Anomaly’s Egg Sequencer, remixing traits to create completely new and exotic species. Raw materials like elements, resources, and harvested matter (Cactus Flesh, Star Bulb, and the like) can be used to split genetic material in unpredictable ways. 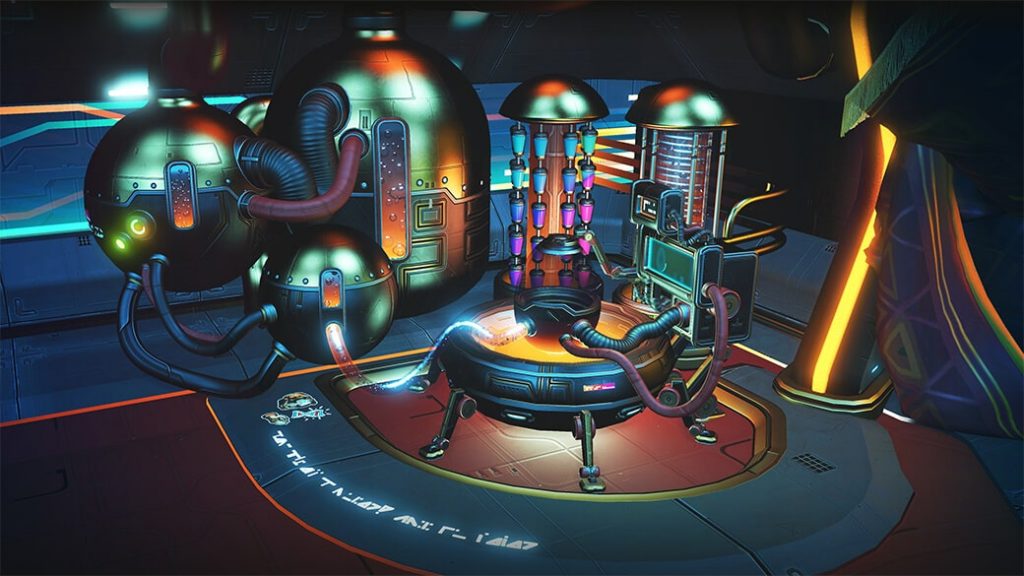 Be careful, though, or you might create something quite bizarre…

This isn’t the only means of customizing pets, of course. Players can go for the far less drastic option of decals and ornaments, which come in both functional and decorative varieties. Their names can also be changed if you’re not keen on the auto-generated one. It’s possible to have up to six pets at a time and view their stats from wherever you are. Each pet has its own mood, trust level (with the player), and personality traits. They are built to be the Traveller’s companions in the full sense of the word–not even solo players have to explore alone if they don’t wish to.

Following an update, you can now pet the dog in No Man's Sky pic.twitter.com/dU48frMLfY

And that makes all the difference.