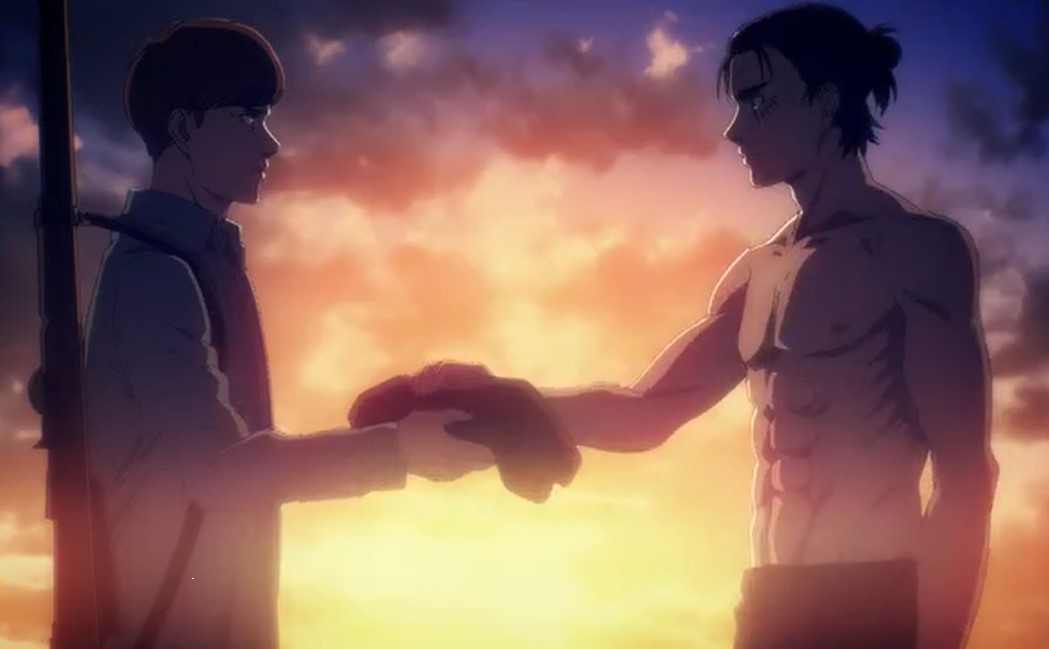 Ever since the battle of the Eledian has ended, Attack on Titan Season 4 reveals the truth about the past. Gabi and Falco are looking for Zeke, who they think have betrayed them. They end up meeting with the South Marleyan, who welcomed them warmly in their house. Kaya heads with Falco and Gabi to the city that was destroyed by the Titans four years ago. Kaya gets to know that Titans killed her parents from Falco.

The citizens question Hange about why Eren is arrested, and she did tell them. She went to the room that has people who expose Eren’s arrest. She told them that they would be punished for spreading the news to the public. Meanwhile, Armin wanted to touch the ice statue that her comrade is inside, but another soldier stops her. Hitch told Armin that dear customer we’re is sorry but no touching allowed here. Armin replies that Titan’s memory has often triggered by physical contact.

Attack on Titan Season 4 Episode 13 will release on Monday, 8 March 2021, at 12:10 AM JST on Crunchyroll, AnimeLab, Funimation, and Netflix. More truth about Eren will be released on Sunday. You can check the previous epode and latest development below.

Previously on Attack on Titan Episode 12

Armin comments that she thought she might get important information from the frozen comrade. Hitch moves closer towards Armin, who said she is not thinking about something bad or anything. Hitch comments that she knows that people would come looking for Annie’s precious information. She looks at the frozen Annie, and Armin asks Hitch not to ban her from coming here. Hitch replies that she will never do that.

She also said that she’s sure that Annie is bored just having her as her chatting partner. Hitch looks at frozen Annie and comments all she does is sleeping and why Annie is so popular. The two left the room and walked together, talking about Annie. Hitch reveals that she doesn’t mind Yelena being attached to Annie.

She asks Armin if she knows about what is going on in the world. Armin said yeah, and she gives a newspaper to find what is happening. Armin discovered that the military is continuing to cling to power and unjustly detain Eren Yeager. The concern towards the military is at its boiling point. The military is refusing to reveal why Eren is arrested, and the citizens aren’t pleased with it. Earlier, when Kiyomi visited Paradise Island, Eren didn’t accept Zeke’s idea.

Hange and the other were agreeing and decided to rest Eren and the other soldier. Zeke’s ideas came with Kiyomi who her eyes are looking for money. Eren refuses to accept since it will affect the lives of children, family, and livestock. Hange did not have a choice but to betray Eren. The truth about Eren being arrested will be revealed soon.

Armin continues to read that the military can’t even reveal the existence of Zeke or the Rumbling. Suddenly, Armin and Hitch witness the citizens protesting. They say that only Eren can save Eldia. Only Yeager can avenge our eaten citizens; the new Eldian Empire cannot exist without Eren Yeager. One of the soldiers came and asked Hitch to help them stop the protest. Hitch heads to help them complaining that it is more work.

Mikasa arrived and started talking with Armin, and the two are up to something. They think they cannot waste this chance since it is the last one. But they noticed that the new recruits of the survey corps are hired. Mikasa is wondering why the new corps are here at the HQ. While Yelena is with Commander Dot Pixis, she told him that she met with Eren the other day. Yelena said she has apologized for keeping Eren in the dark until now.

Yelena told Pixis that she knows that there are enough reasons for him to detain the volunteers. Pixis said Yelena is not acting like herself. Yelena said she used to think Pixis and his people don’t know what the world is like. She also said it would be too late if they keep on postponing the discussion. Yelena said Eren has they have the same concern as her. Pixis asks if it is the reason Yelena advised Eren to infiltrate Marley to force the military into action.

Yelena replies that she did not do things like that, but she thinks the military government needed some push. They both continue to talk about Eren and how Yelena used to meet with Eren in secret. She reveals the truth about the meeting with Eren and the Founder. She thought that Eren’s Founder was the key to destroy Marley. But Eren delivered a massive blow that they hoped for and a divined punishment that Marley suffered from.

Yelena said the world is about to change, and she wants to see it happening while she’s next to the brothers. Later the Supreme Commander’s room got blown away. Commander got sent flying and falls in front of the citizens who said itis their time to fight. The soldier reveals that Eren Yeager has escaped the underground cell. They started to look for him. Eren met with his new crew waiting for him, and they give him clothes and told him about the bomb.

Read how Gabi and Falco met with the South Marleyan on Attack on Titan Season 4 Episode 12.

Please Feel At Ease Mr. Ling (2021): Everything You Need To Know

What To Expect From Lovestruck In The City Season 2?