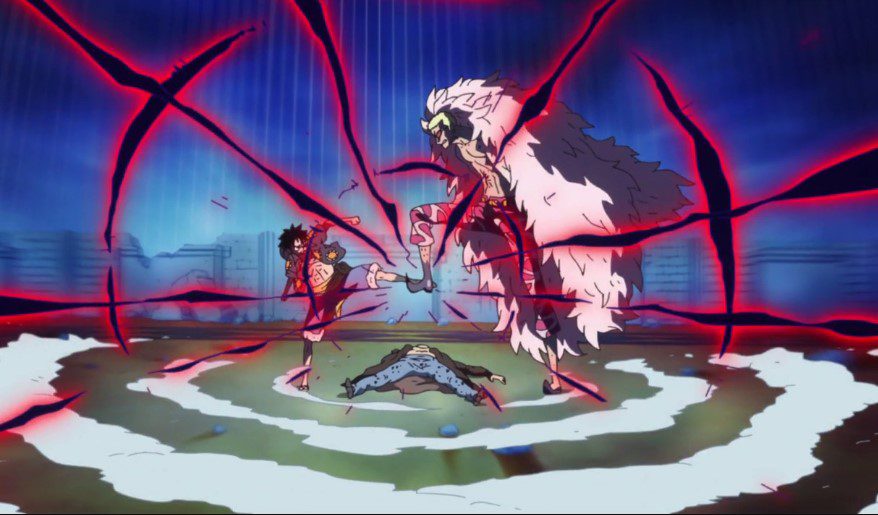 Most One Piece episodes will be remembered by their iconic moments when we saw Luffy going into the next level of his powers. We saw this when Luffy beat Doflamingo as we managed to see his gear fourth for the first time in the anime. From the start of the fight, Luffy was confident that Doffy was no match for his gear fourth attacks, and this was evident the moment Luffy went into bound man state.

Luffy was enraged at the way Doflamingo treated his subordinates and the citizens of dressrossa in general. And given that he had just mopped the floor with Law, then Luffy took it upon him to make sure that he avenges his fellow supernova.

The Dressrosa arc was a game-changer for Luffy because he managed to face an opponent he could fight toe to toe, unlike in most of his fights. Because we know that Luffy likes pecking up fights that, he has no idea how he will win. For him, even if it looked impossible, he would still go ahead and fight without any fear.

So this is one of his characteristics that suits well his character development. Because we should remember that from his training with Rayleigh, Haki only gets stronger when one fights opponents that are stronger. So this always explains Luffy’s rapid development up to a point where he could even rival the Yonkou’s.

And now, looking back and the episode where Luffy beat Doflamingo, we would then see how easy it was for Luffy to deliver the finishing blows to Doflamingo using his gear fourth attacks. To get an in-depth understanding of his powers, let’s look at the episode in detail and how Luffy managed to defeat someone as powerful as Doflamingo.

What Episode Does Luffy Beat Doflamingo?

Luffy beat Doflamingo in One Piece episode 733 titled ‘Attack on a Celestial – Luffy’s King Kong Gun of Anger.’ So Luffy finally used his powerful attack to defeat Doflamingo and bring an end to his reign in Dressrossa. This was after their battle resumed, and Doflamingo relentlessly attacked Luffy with his string and tried to take control of him. 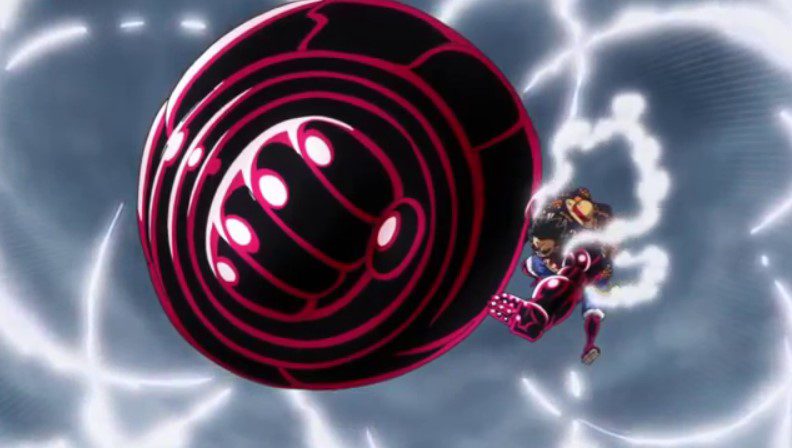 But when Luffy activated his Gear Fourth, he managed to break free from Doflamingo’s strings and moved to prepare his next attack as their final showdown continued. Since this was the second time Luffy went into Gear 4 after revealing its weaknesses, Doflamingo only wondered how long it would last this time, and it was a race against time for him.

Luffy then took the battle into the air as Doflaming followed him, attempting to control him again with his strings. Luffy was even enraged by Doflamingo’s actions as he was treating people like puppets using his strings. From here, they exchanged a few words on morals and how Doflamingo should have treated his people. Seeing that Luffy was coming up with yet another powerful attack. Doflamingo created a web to defend as Luffy prepares a stronger version of his Kong Gun.

We know that once Luffy surpasses his limits, we get a glimpse into his training, and this time it was when he was with Rayleigh. The attack proceeds as Doflamingo tries to shoot bullet string at Luffy, leading to the clash of their most powerful attacks. The impact was strong enough to send ripples all the way to the ocean water, which was way below on the ground.

It was an interesting sight when the citizens of Dressrossa cheered Luffy as his fight with Doflaming was finally reaching an end after his initial struggle with Haki the first time.

Luffy vs. Doflamingo: Who Won?

Another interesting spectacle from this fight was the spectator, who has been keeping tabs of the situation all the time. So there was a brief despair when Luffy was out of Haki for 10 minutes while Doflamingo abused the citizens. So now they were a bit nervous and would not want the same situation to continue since Doflamingo was on the verge of destroying the entire Island.

A lot has changed for Luffy throughout this fight and even afterward because even the marines were on Luffy’s tail and were about to arrest him afterward.