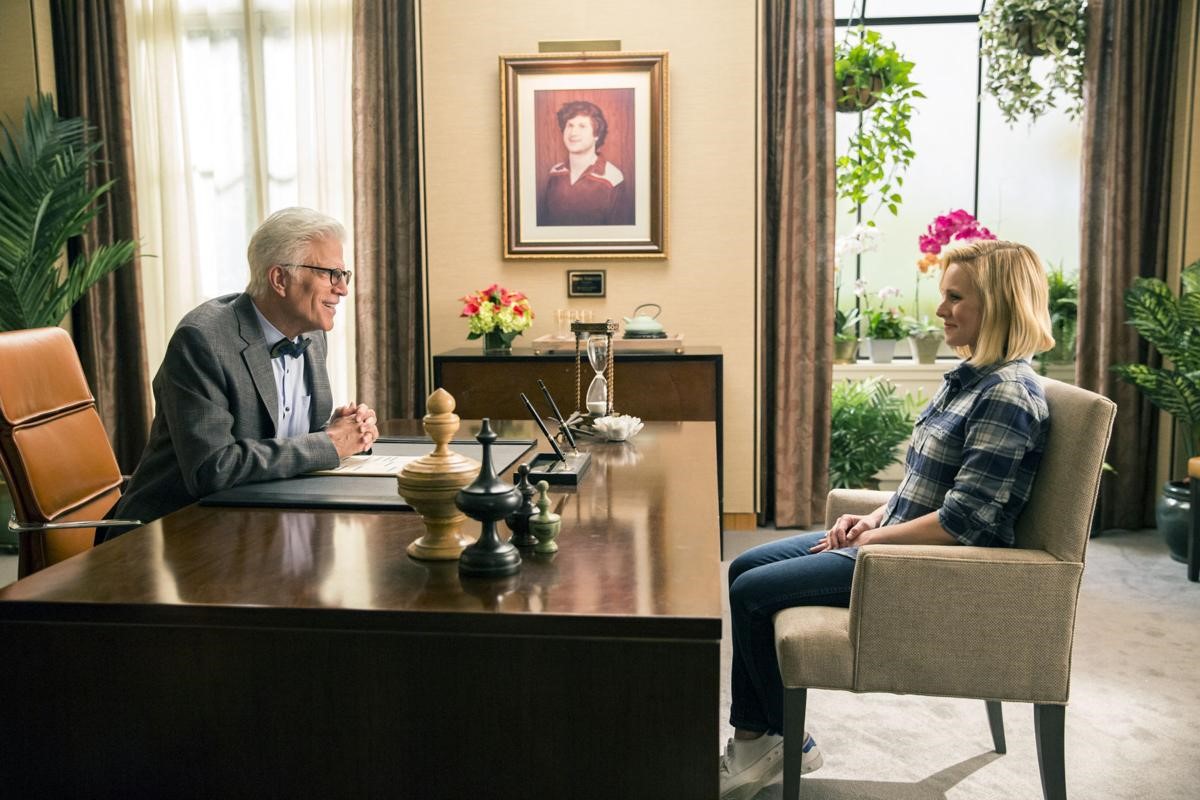 The Good Place first premiered in 2016 and fans haven’t stopped talking about it ever since. I mean, how many times do you get to watch a series that is both mentally stimulating and extremely entertaining at the same time? This is a show that has seemed to have gotten everything right. From the cast to the sets to the storyline – everything is fine? See what we did there? Okay, we’ll stop!

Before we get neck-deep in puns, we think it’s best to tell you what the point of this article is. All of us know that the show has some very special moments lined up. But this does not mean we can’t pick and choose a few from this list. Okay, we’ll admit. This is a very difficult thing to do. We mean, have you watched the show?  But if there is one thing you should know about us, it’s that we love a challenge.

That is why we’ve taken up the task of listing down some of the best moments from this show. You read that right, today, we will look at ten moments from The Good Place that will make you understand just why this show is so darn popular. Get ready and make room for a few giggles! 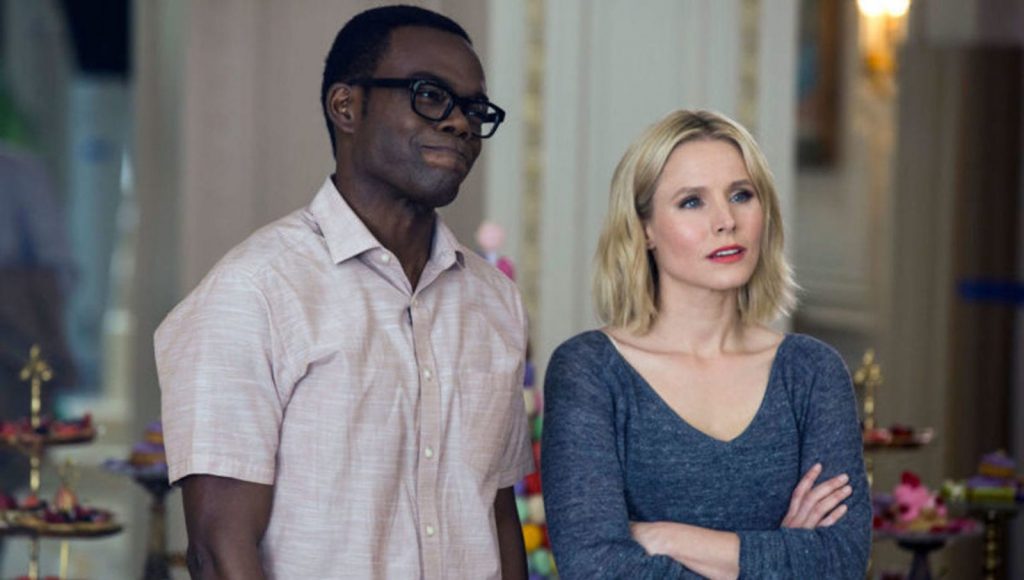 Chidi and Eleanor – The Good Place

All good things need to start somewhere. This is where this special show started. Incidentally, the first episode of the very first season of A Good Place is one of the best out there.

Titled Everything Is Fine, this episode made us understand right away just what we were signing up for. We knew who the characters were right the moment they stepped into the scene. Well, almost. This episode set the pace not only for the season but also for the show on the whole. The makers had somehow managed to get us hooked right away and knowing their reputation, we aren’t surprised. If you are looking for some persuasion to watch the show, put on the first episode, and before you know it, it’s 4 am and you’ve binged the entire series in one sitting! 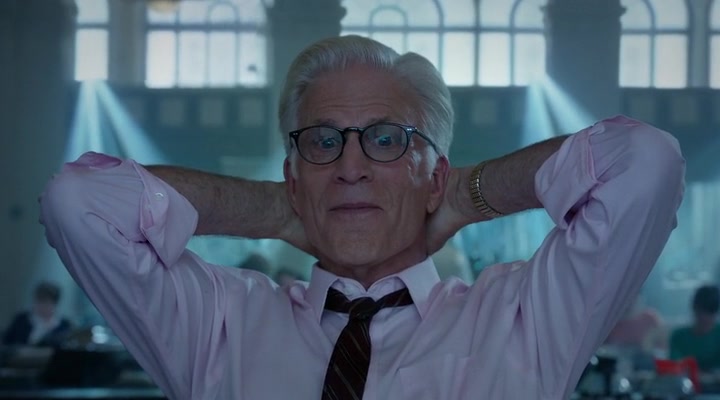 If something has a beginning then it should, technically, also have an end. A little too philosophical? Well, we really are talking about The Good Place here, aren’t we?

Michael’s Gambit is the last episode of the first season and boy are you not ready for this one! Throughout season one, the makers drop hints that point towards the big reveal but that does not even compare to what you will learn through this episode. Through this, we see how the characters have been meticulously thought about and crafted. You will see several plot points that you did not quite understand begin to make sense. Before you know it, the episode will leave you questioning everything you thought you knew about the series. Think we’re kidding you? Watch it and you will know. 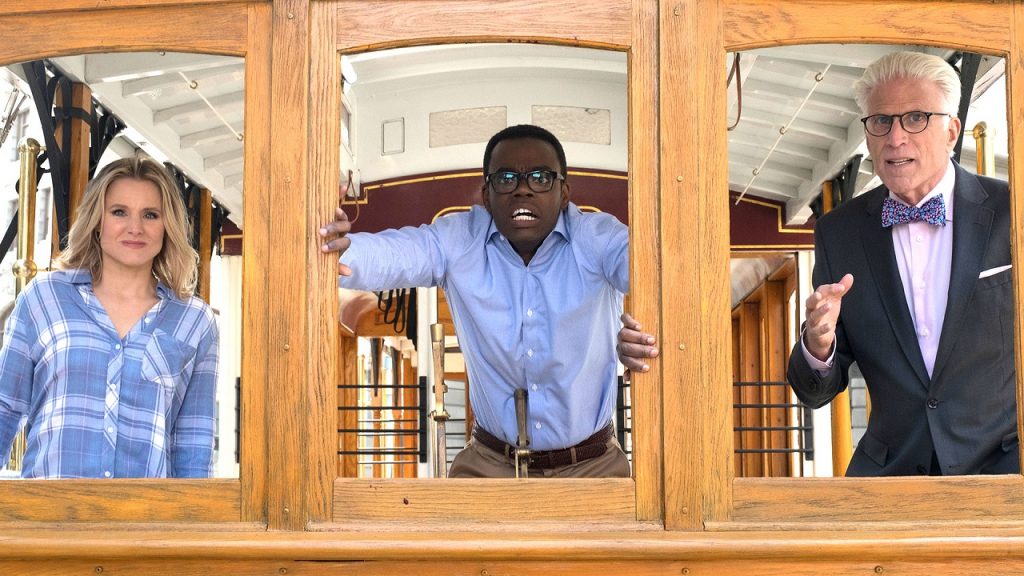 The Good Place – The Trolley Problem

The Trolley Problem is one of the funniest episodes in the show. And if you think this is because we get to see Chidi in yet another soup, no! We love Chidi in this household. Fine, yes it is exactly that!

This episode sees the characters truly become onto themselves. We would have thought we knew them well enough by the time to episode rolls in but we are given a better insight into their psyche here. Michael just doesn’t seem to understand the idea of ethics and poor Chidi is made the scapegoat once again. While this seems like a very grim description, the episode is anything but that. 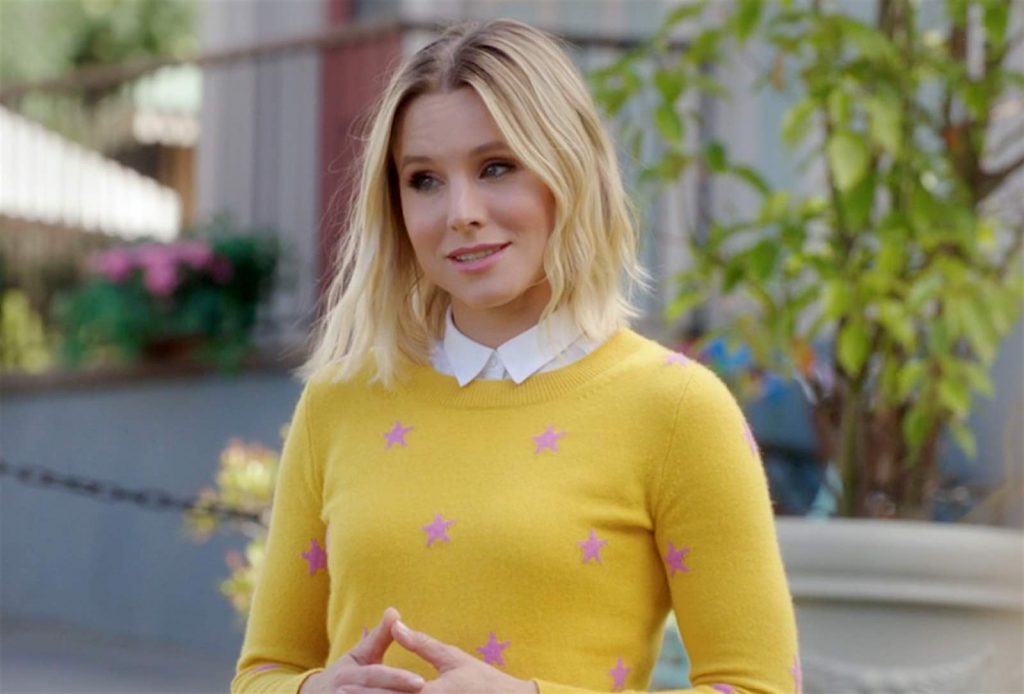 Here is another one of our favorites from the second season – Existential Crisis!

This episode builds on to everything that happens in the next and it does it with much finesse. But keeping this aside, the star here can easily be zeroed in on. It’s Tahani, of course! Jameela Jamil plays the part to perfection and that is saying the very least. Her character takes the cake with this one. You are left with an impression of Tahani that stays with you throughout and this can be taken as a mark of GREAT character outline! 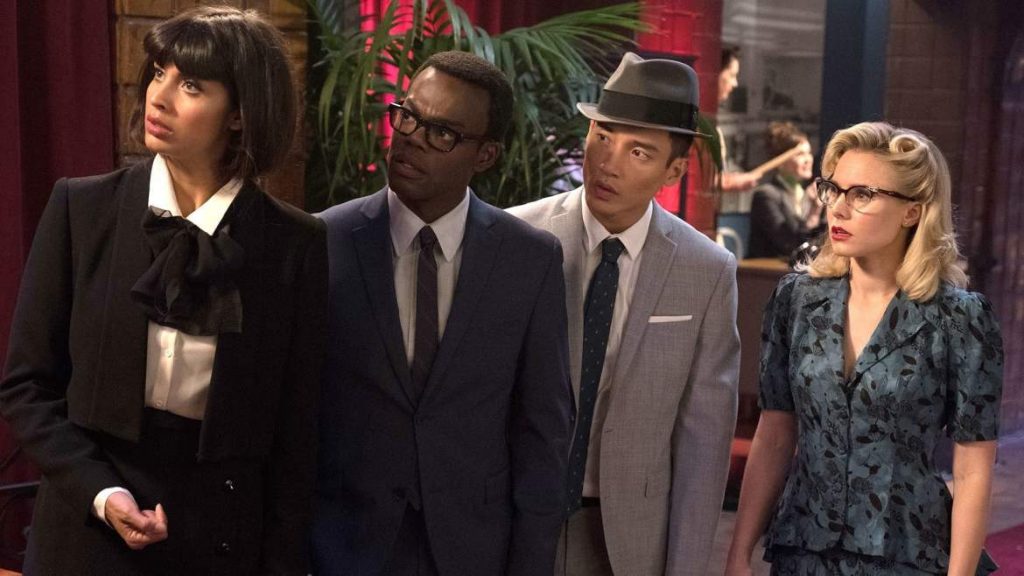 Now, who can make a running gag featuring a burrito that is so hilarious that you are left laughing for an eternity? The makers of The Good Place of course!

In this episode titled The Burrito, we are left to wonder if there is anything the writers can’t spin into a joke. From the looks of it, such a thing does not exist! But that is not the only thing that makes the episode so special. We are also made to witness the gang talk about how much they’ve personally improved since arriving there and that, folks, is one of the most heartwarming moments in the entire series. 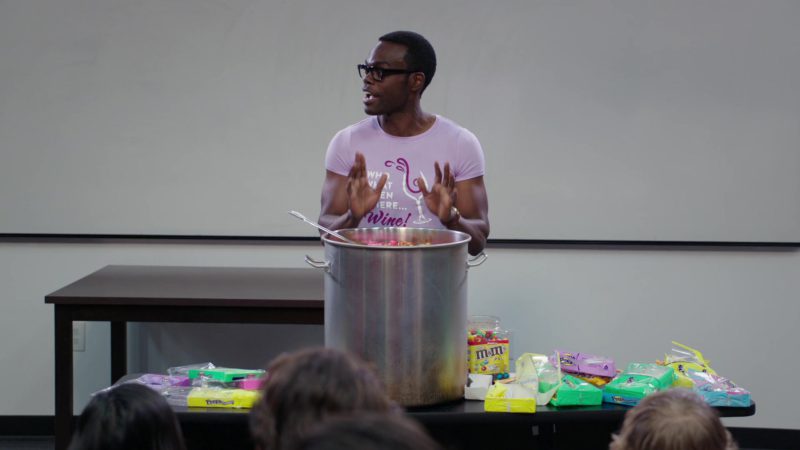 Chidi and his vat of chili

This episode became so popular that we saw a bunch of people tattoo the phrase Jeremy Bearimy tattooed on them. True story!

(Non) Jokes apart, this could easily be ranked amongst the best-known episodes in the show. This is because it is really, really good. The episode sees all the characters lose it and crack. This might sound a little chaotic to you but whatever level of chaos you have in mind, this exceeds all of that by a large extent. And what have we learned about chaos, from experience? That is hilarious, of course! 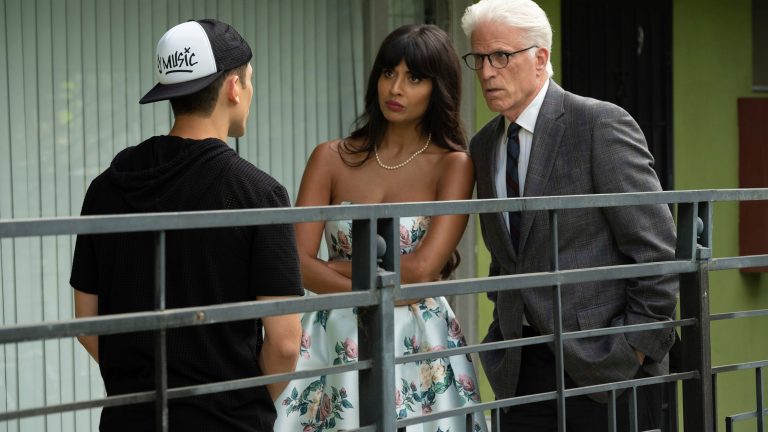 With this one, we get to look into the life of one of our favorites: Jason. This is also where we are introduced to his father. And, get this, he is unironically called Donkey Doug – leaving us with the episode title The Ballad of Donkey Doug. If you are giggling from this already, wait till you actually get around to watching the season! Grab some tissues before, though, because you will laugh so much that you cry! 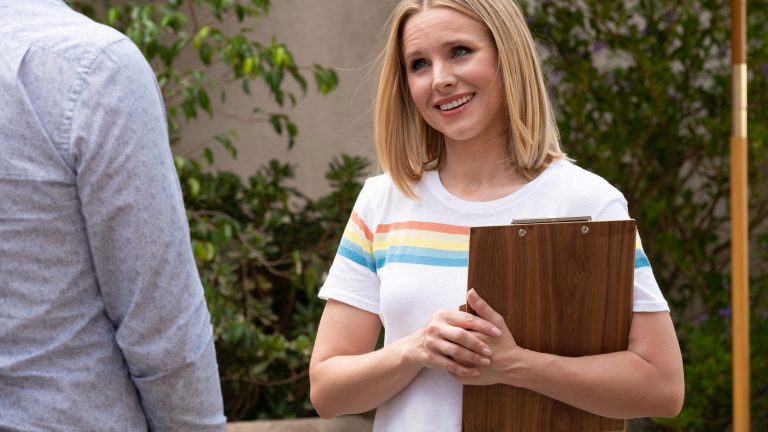 This one is titled Pandemonium and it is probably one of the most heartwarming and heartbreaking episodes of the entire show.

It sees Eleanor take up Michael’s job when he succumbs to panic. This sounds fun, right? Wrong! Well, at least not right away. The episode sees the relationship between Eleanor and Chidi blossom but all of our dreams are soon crushed when they have to make a sudden and unexpected decision. This season finally will leave you shedding a good few tears and cursing the makers for a plethora of reasons! 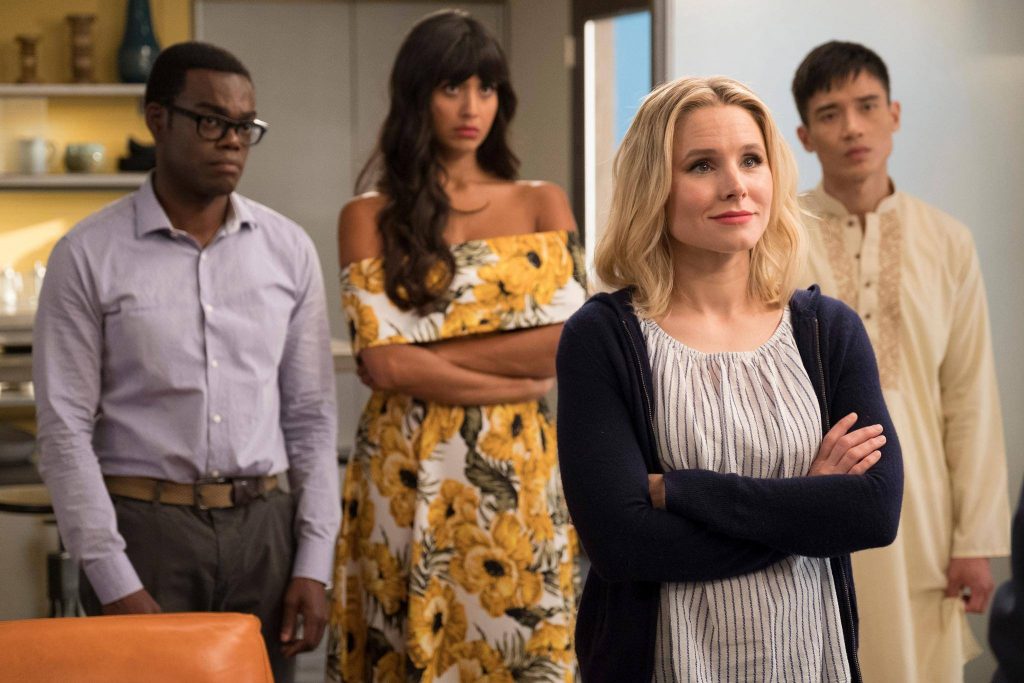 Eleanor and the gang

This was one of the most anticipated seasons of The Good Place because it is potentially the last. So, you best believe it when we tell you that this received a welcome never see before. Titled A Girl From Arizona this episode introduces to the storyline the new season would focus on. If you’ve already guessed, it is new and exciting and entertaining and what not! Sigh!

In this episode, takes up the role of the architect. New test subjects are introduced and they are made to inhabit a new neighborhood. The aftermath of this is engaging and watching the episode, we already know that the season will be great! 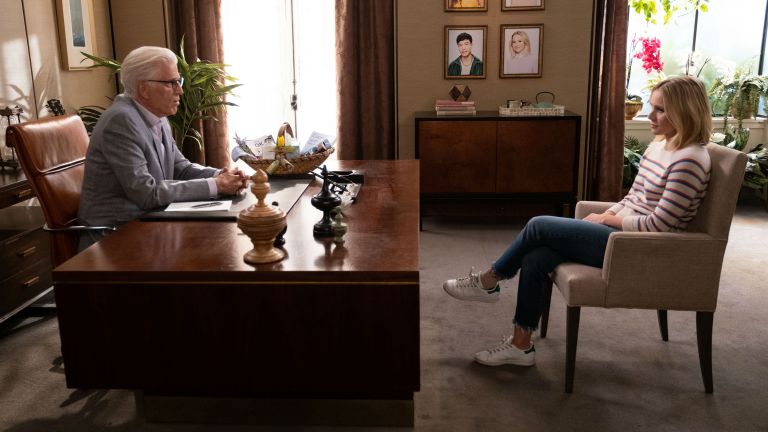 We’ve already told you on multiple accounts that you are going to cry. With this one, we promise you that you really are. Why? Well, this is the series finally of a show that has managed to secure a special place in all our hearts. The Good Place ends on a great note with Whenever You’re Ready and it leaves us asking for more, knowing our fate.

This episode has something in store for every single one of us. It shows Jason and Tahani take their lives by the horn. Michael now works with the afterlife committee to set things right, good for him, we’d say. And Eleanore and Chidi? How could we ever forget this duo! Rest assured that if you are someone that ships them – the finale has something to offer you too! If you’ve come this far into the show, we assure you that this final episode will not disappoint.

Read: 5 Similar TV Shows to The Good Place That You Need to Stream Today