This show chronicles the life of Dorothy Turner, a prosperous and career-focused woman. However, her entire life falls apart when she experiences a heartbreaking loss. The grief is related to her and her spouse losing a kid at thirteen weeks.

She falls into a dark hole due to the loss, which damages her ability to distinguish between fact and fantasy. Grieving, a non-licensed therapist suggests using an object therapy doll with the household, which magically helps Dorothy recover from her psychotic period.

Dorothy employs a spooky 18-year-old babysitter named Leanne to care for the child because she is sure the doll is realistic. Her grief begins to take its own shape and presents a risk to her and her children’s survival.

Recap of season 1 of Servant

To aid Dorothy, her family buys a doll; Seán, Dorothy’s spouse, detects the sounds of a baby crying, and the doll has become alive. Sean examines their spooky new nanny, Leanne, while attempting to identify whose kid this is and from where it came while involving Dor’s brother Julian.

They find the tombs of every member of the Grayson household, even Leanne, and the horrifying scene of what appears to be Leanne’s hometown. Flashbacks show the circumstances leading up to Dorothy’s baby’s conception as Sean starts spying on Leanne.

Dorothy makes arrangements to have the baby, Jericho, christened following a weird meeting with George, a guy purporting to be Leanne’s  Uncle. Nat, Dorothy’s psychotherapist, tries to step in out of worry for Dorothy’s welfare.

Julian uses a wine bottle to kill a dog. After Jericho disappears, is substituted by a doll, and then reappears later that evening, Julian & Leanne have a heated confrontation; Julian begins to divulge to Leanne what he learned as part of their investigations. 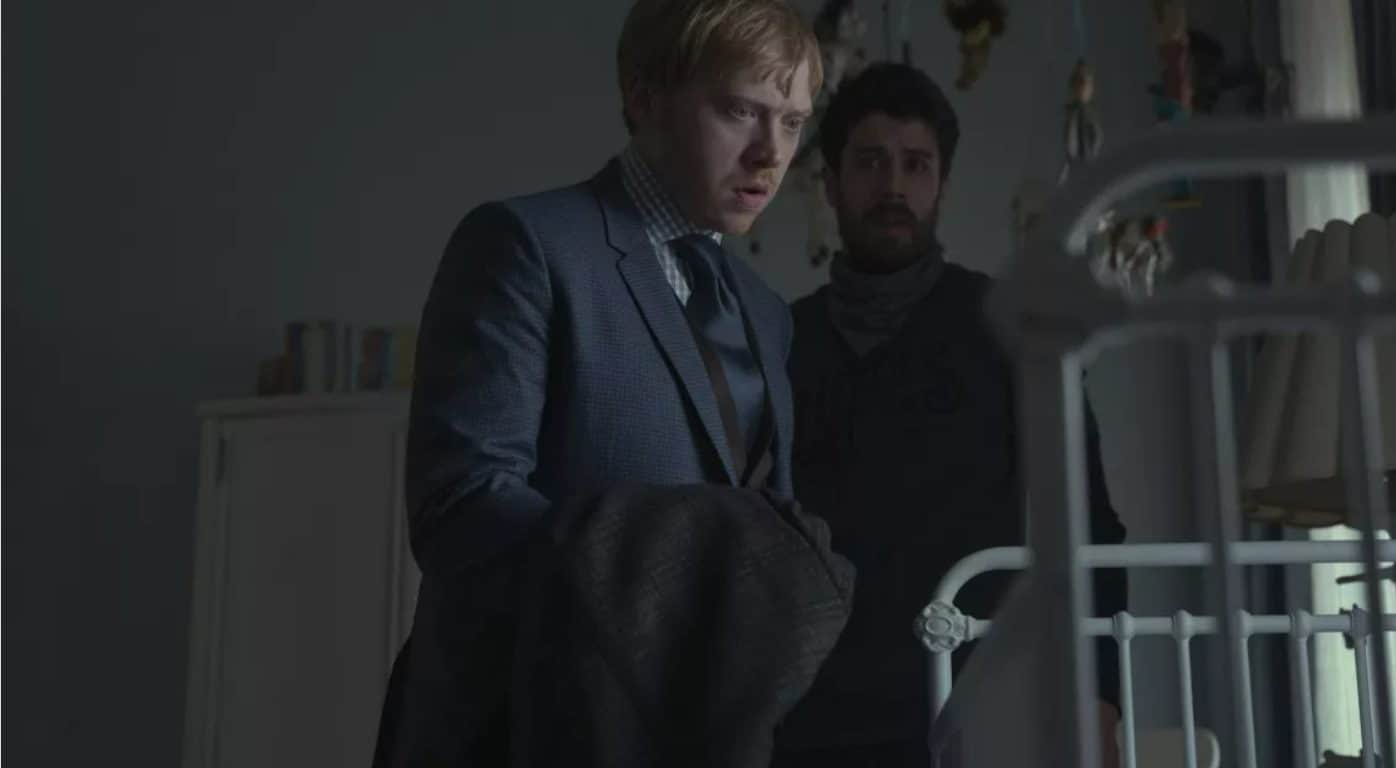 The brother from Servant.

Leanne pulls the infant away from Dorothy, and we eventually discover what transpired to the actual Jericho following his birth. In the last chapter, Leanne’s sweet Uncle makes a surprise appearance, and Jericho is given a birthday celebration. We learn more about the harmful religious cult known as the Church of Minor Souls and Leanne’s auntie May.

Recap of season 2 of Servant

A surprising gift is left just at the door, perhaps by cousin Julian, as Sean & Dorothy come to terms with the possibility that Jericho could be dead. Dorothy keeps looking into the cult. Roscoe, a police detective, rejoins the narrative. When Dorothy resumes her job, we discover what might have occurred to Roscoe.

We then see that  Sean & Dorothy keep looking for Leanne; they’ve even set up a phony pizza shipment to get inside a residence where they believe she might be hiding. Dorothy poisons Leanne, who then goes on to Tobe, Sean, and Julian. Dor then commands Tobe to return Leanne home.

At 2 am every night, as he tries to acquire information through Leanne, who is being held prisoner, Dorothy is pushed to irrational actions. Sean’s tastes and feelings start to resurface as Leanne flees for freedom. It a still from season 2.

Sean & Dorothy scramble to collect funds to pay off the cultists as just another weird parcel and a ransom demand are delivered to the residence. When they return to the house, they run with George, who is shown to be Sean’s Uncle, who gives Sean & Dorothy a route out in exchange for returning Leanne, a dissident cult member.

The police interrogate Dorothy well about the clan’s connection to Leanne after a gunshot in the neighborhood is attributed to the Turners’ noncompliance. Leanne is meant to be watching a recording, and Dorothy, as well as the private eye, rendezvous at the residence.

Recap of season 3 of Servant

Approximately three months following the events in season 2, Leanne fits into “regular life,” and the Turners are organizing a trip. While evading capture during a break-in, Leanne finds Josephine’s corpse in the walls.

Leanne pulls a knife against one of the attendees at a celebration, and things will take a strange turn when one baby attempts to climb into the flame, and a swarming of wasps invades the space. To demonstrate that the baby doesn’t belong to Dor, Julian attempts to obtain DNA through Jericho and, afterward, Leanne.

Tobe’s all-new partner unintentionally loses a hand throughout a wild party at the apartment, and many more homeless folks begin congregating outdoors. Leanne begins to break out of her shell as Dorothy hosts a street party for the neighborhood, but then when two cult followers approach Leanne, the situation immediately gets violent.

Leanne’s coming home soaked in blood leads us to believe she has been assaulted. Dorothy discovers the Cctv just after the assault. Meanwhile, Leanne has a strange meeting with a local pastor with whom Sean has become friends. The attack’s actual real motive was revealed through a memory of Leanne, who saw religious fanatics being killed.

Dorothy questions Julian about his friendship with Leanne. We then see Leanne’s painting, which contains unsettling pictures of certain earlier story occurrences, is found by Dorothy. Following a violent dispute about Leanne’s future between Sean, and Dorothy, then, subsequently, Julian, Dor focuses on Leanne’s unsettling existence and seeks to get rid of her.

When Leanne chooses to go of her own volition, Jericho transforms into a dead doll. We then see that  Leanne is eventually located outside during a desperate search, and then when she goes back inside, Jericho reappears but is no more a doll. The Turner clan wants Leanne should stay alongside them.

Isabel, Dorothy’s coworker, begins looking into Leanne since the mother and caregiver are still having issues. Leanne & Isabel continue their conversation until Leanne departs the house to go to the homeless camp, where she appears to take charge of the community. When Dorothy approaches Isabelle about “what she did,” we learn that Isabel has already been looking into Dorothy, and she has discovered the Jericho burial record. Threatening to reveal Dorothy, Isabel might put Jericho in jeopardy.

Leanne consoles Dorothy for doing “whatever she wanted to do” to get Jericho home, but Dorothy informs her dad that evening over supper that she wants his assistance to have Leanne placed in a hospital. A startling text message exposes a live gunshot while Isabel covers it as a stand-in for a coworker.

As unexpectedly, a stray shot shoots Isabel in the skull live on TV, Leanne comments that Isabel “merits to be there.” Following Isabelle’s passing, Dorothy becomes increasingly wary of Leanne and starts looking through her stuff and asking about her wounds.

She suggests that Leanne & Dorothy see a psychiatrist together again after pressing her father to assist her in getting Leanne into a mental hospital. However, the strategy fails when Dorothy is really brought up by the Doctor, who Leanne defends. As Dorothy’s plot begins to take shape, Roscoe looks into the death of a resident of the homeless neighborhood.

Before the tragic conclusion, Uncle George reappears and advises that the Turner home is starting to deteriorate and crumble. Leanne attempts to prevent Dorothy from fleeing during the evening when she is with Jericho. After Dorothy’s tragic fall over the railing and landing on the room’s flooring, Sean & Julian show up.

What will happen in season 4 of Servant?

As per the official synopsis made available by the streaming service, The Turner Tale’s last chapter is dramatic and moving. “Spruce Avenue and the entire city of Philadelphia are in danger as Leanne’s battle with the sect intensifies.

The Turner household will deal with the growing threat posed by Leanne and “the undeniable truth to which Dorothy is awakening.” The series will ultimately solve the riddle, “Who is Leanne Grayson?” while another question is, “Who’s the kid in their residence?” as the home begins to fall apart.

Who will star in Servant season 4?

According to the casting statement, the show’s regular characters will return to reprise their respective roles. Lauren Ambrose will reprise her role as the worried Dorothy Turner. At the same time, Toby Kebbell will return to the character of Sean Turner. Sean Turner is Dorothy’s husband and an arrogant but excellent chef.

To play Julian Pierce, Dorothy’s psychotic sibling, Rupert Grint, will return. And Nell Tiger Free, who portrays Leanne with skill, will return to frighten in that role.

When is the Servant S4 episode 1 Release Date?

Servant Season 4 episode 1: Where To Watch

Servant Season 4 Wpisode 1, will air on Apple TV + at 3 am in the US. At the same time, viewers from other nations can stream Servant s4, episode 1 via Apple TV+ at the dates and times listed above after matching them with their respective local regions’ times.