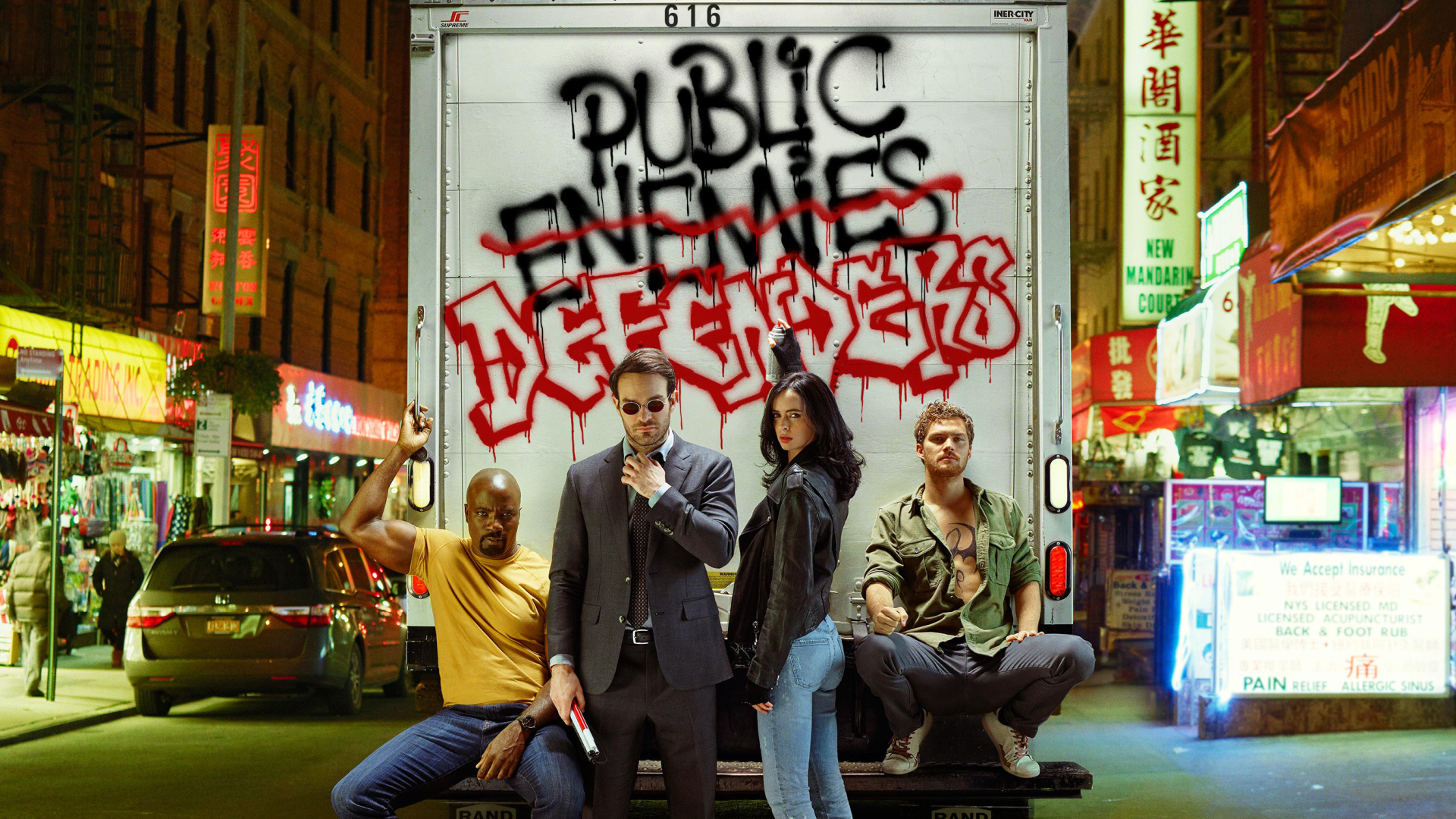 Marvel is making big and breaking records on the big screen, some of its show is in continuity witch the MCU some are not but most of them have one thing in common they are good, except Inhumans which was a disaster for Marvel. It is the lowest-rated series ever produced by Marvel.

Here are all the TV shows which are in MCU and X-Men Universe.

Daredevil is the flagship show that kickstarted the Marvel universe on Netflix, it is set in MCU, and there certain callbacks to the other MCU characters like Captain America and Hulk. The casting of this show is picture-perfect, including Charlie Cox and Vincent D’Onofrio playing the Kingpin, a ruthless and brutal crime lord who is also Daredevil’s nemesis.

There are 3 seasons of this show, and there is something common in all three – the action and fight choreography are top-notch especially the Hallway Fight” – a single action sequence that demonstrates the hero’s skill.

Legion a show that can easily be called a mindfuck superhero series. All three seasons were praised for the narrative structure and visual style, and its different take on to the superhero genre. It follows the story of David Haller played by Dan Stevens who is the son of Professor X. He is suffering from Schizophrenia but later discovers that his mind is infected by the parasitic mutant Shadow King.

It is the hardest Marvel show to get into because of the weirdness and style, but if you can get past all that, and after that, you will be rewarded.

Punisher was first introduced in Daredevil season 2, Jon Bernthal was the perfect choice for this role. It is filled will thrilling action sequences and violence that even surpasses the Daredevil, it is also praised for its portrayal of PTSD by a comic book character in a superhero show. The show gradually reveals the dark conspiracy behind the deaths of the Punisher’s family. While the problem lies in the pacing of the show and some weak plot points, other than it is a good adaptation of comic book character on the big screen. It was canceled after 2 seasons but we can see punisher on the big screen in the near future.

It is the show which was kickstarted the followup shows of the MCU from the big screen to our tv screens, it released its first season in 2013 after that there is no stopping ahead for this show, the seventh season of the show will release later this May. Clark Greg returns as Agent Coulson which we previously have seen in other MCU films, first, two seasons explains how Coulson was resurrected after his death in The Avengers. Besides that

S.H.I.E.L.D. agents deal with various unusual threats add enemies like Life Model Decoys, Hydra, Inhumans, alien species such as the Kree, and time travel. Over the course of its seasons, it’s developed a plot all of its own, one that allows it to stand a little bit more separate to the Films.

Jessica Jones is set in the same universe as that of Daredevil as Marvel on Netflix, it has 3 seasons after that it is canceled due to the expiry of production rights. Krysten Ritter plays Jessica in the series who is suffering from PTSD after getting out of the control of Killgrave played by David Tennet. Jessica has a friend named Trish Walker in the show who usually takes the mantle of Hellcat. The first season is best among the three, which focuses on more of the detective side of comic book story which was missing from other Marvel Shows. Luke Cage appears as a side character and love interest of Jessica in the show which later on gets his own series.

The Defenders is a miniseries that featured all the characters from Netflix Marvel Universe to form a team in New York City to fight a common enemy, the Hand. The series is set after Daredevil season 2 and before the first season of Iron Fist. we got our favorite characters teaming up and fighting bad guys, it like the avengers back in 2012 but this show was not to the hype but no less than a good show. It majorly suffers from pacing issues but it is worth a watch.

Agent Carter is a show which is set in MCU and follow up to the plot of Captain America; The First Avenger, Hayley Atwell reprises her role as Peggy Carter from the film series and now leads in her own show. It was praised critically but canceled after the two seasons due to the fall in viewership count. Agent Carter follows her adventures as an assistant who also happens to be secretly working with Iron Man’s father, Howard Stark.

Mike Colter reprises his role as Luke Cage who was earlier, shown as a side character in Jessica Jones is back and now leads his own series. The series tells us the story of Luke, how he gets his powers and more back story, the first season features Mahashla Ali playing Cottonmouth and the main villain is Diamondback. Season 2 is a big improvement that dives into the more heroic side of Luke and a better plot and supporting characters sadly it was canceled after just 2 seasons.

The Gisted is set in X- men universe, it got a 7.5 rating on IMDB, it follows the two ordinary parents who take their family on the run from the government when they discover that their children have mutant abilities, and join an underground group of mutants who have to fight to survive. It got canceled after two seasons and can be easily watchable.

Runaways is a show which is based on the comics of the same name and is fan-favorite among comic book fan, they all were waiting for this comic book to hit the tv screen since its incarnation, It follows the story of six teenagers from different backgrounds unite against a common enemy – their criminal parents collectively known as the Pride. It has now ended after airing its 3rd and final season.

The show gets positive reviews from critics but was canceled after 2 seasons at FreeForm, it follows the story of Louisiana, teenagers Tandy Bowen and Tyrone Johnson come from different backgrounds and have acquired superpowers after the accident that is the collapse of the Roxxon Gulf Platform. As their friendship unfolds, they soon realize that their powers work better when they are together, they use these powers to try to fix some of the wrongs in the world.

Iron Fist could be the next action series, that the fans wanted but it got into some controversy that the creators cast a white character as fans wanted an Asian-American actor to undo the comic’s culturally appropriative roots. It was canceled after two seasons, it received generally negative reviews but was have a large viewership. It was boring and had bad acting and story all around.

This show is the worst show in the Marvel history, the show is literally boring the casting, performances story it’s all-round to nothing. The first two episodes were released in Imax for a limited time in theatres. The series was met with unfavorable reviews and low television ratings and was canceled by ABC in 2018.