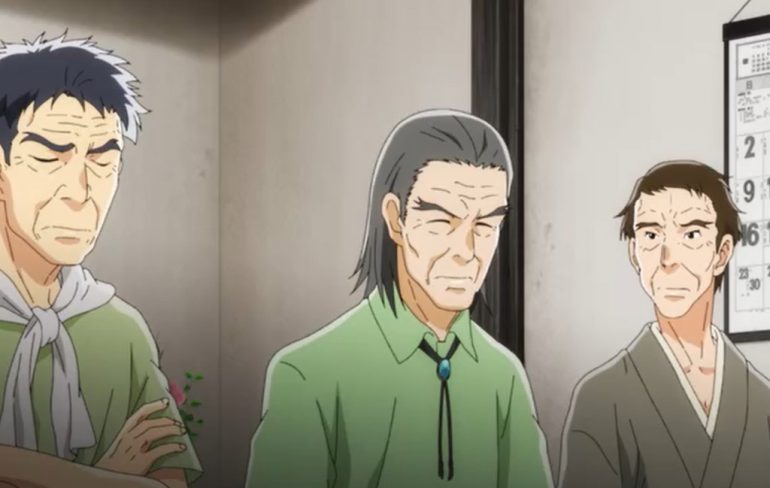 The old geezers from the Hinamizawa town are complaining about Teppei who kicked the idols from the shrine. They fixed it and put it back in its rightful place and they reveal that he relieved himself on the torii shrine gate. They also talked about the Oyashiro-Sama curse that hit the Hojo. The next day the students gathered in numbers waiting for Tomitake and Takano who suddenly shows up. Rena asks why those two are here.

Takano replies that Keichi told them everything that has happened last night and Dr. Ira show up. The students started an upraising stand-up for Satoko who has been abused by her uncle Tapei. On the boards, they wrote ‘’Rescue Satoko Hojo CWS, Act Immediately. Shion comments that they have to save her now. On Keichis armband he wrote save her a soon as possible and they both talked about how they are going to help her.

Higurashi: When They Cry – GOU Episode 13 Release Date and Recap

Higurashi: When They Cry – Gou Episode 13 will be released on Thursday, 24 December 2020, at 11:30 PM JST. This post may contain spoilers of the next episode watch out when you proceed. Watch this Anime officially on Funimation, Netflix, and AnimeLab. Take a look at the recap and preview below.

Previously on Higurashi: When They Cry – GOU Episode 12

They both head to the CWS office and told the lady to act immediately on the case they brought yesterday about Satoko. The gentleman that was working on their case shows up. He reveals that all rooms have been reserved for the meeting but the director is willing to help them. Only three people will be able to fit into the small meeting space. They selected Dr. Ira, Keichi, and Rika for the meeting.

The meet took place inside the CWS room and end at sundown. When the trio gets out of the meeting. Shion and others ask them how did it go and Keiichi reveals that they are delaying the process. He also reveals that they will keep on monitoring Satoko until they get evidence about her uncle. Since Satoko is denying the allegations the CWS can’t help her if she is not revealing the truth about her uncle Teppei.

Keichi reveals that the CWS will make a decision in moth’s time about Satoko’s matter. Mion is worried about how much Sakoto will have to suffer until she gets help. Dr. Ire orders everyone to go home since they have the festival planning meeting tonight. Later the Watanagashi Festival planning meeting started. While the meeting is on Chie talks with Keichi about the CWS in private.

She asks Keichi if he can stay low and see what happens then react to the situation. Keichi realizes that the mayor is pressuring Chie and others so that they won’t get involved in Satoko’s matter. He tries to reason with Chie and ask her why the old members of the village hate Hojo’s family. He reveals that since the dam war is over, Satoko hasn’t done anything to deserve to be treated like this.

Mion reveals that during the dam war, the Hojo family was the village’s arch-nemesis. That is how everyone viewed them and when her parents passed away. Everyone knew that Satoko was totally innocent. But no one’s ever come forward to publicly forgive the Hojo’s and they were afraid to associate with the Hojo. Because defending them paints a big target on everyone and they can’t get involved with the Hojo.

Shion thinks that it’s because of the Oyashsiro-Sama curse that has still affected the old hags and geezers of the village. Keichi decides that he to support Satoko no matter what and get rid of the rotten ideas that those oldies of the villages have. All of them agreed and Chie sensei supports them. They went back to the meeting and Keichi address his matter in front of the oldies.

He got into an argument with oldies who are being hotheaded. After a long argument the oldies got defeated and they realize that Keiichi and others are right. The mayor got touched by Keichi’s words and they decided to stand together on Satoko’s matter. They devise a plan for the CWS to help them a soon as possible and they visited the village council to convince her.

The old hag asks Ire if they can trust Keiichi that he can bring change. Ire guarantees Keiichi’s trust and a promise then Keiichi asks her to give him a chance. The old hag agrees, saying that Keichi is a convincing evil bastard that threatens to kill her.

For this upcoming week, that’s all about what the upcoming episode 13 has revealed for us. New updates of this Anime will be available every Friday after the release of a new episode.