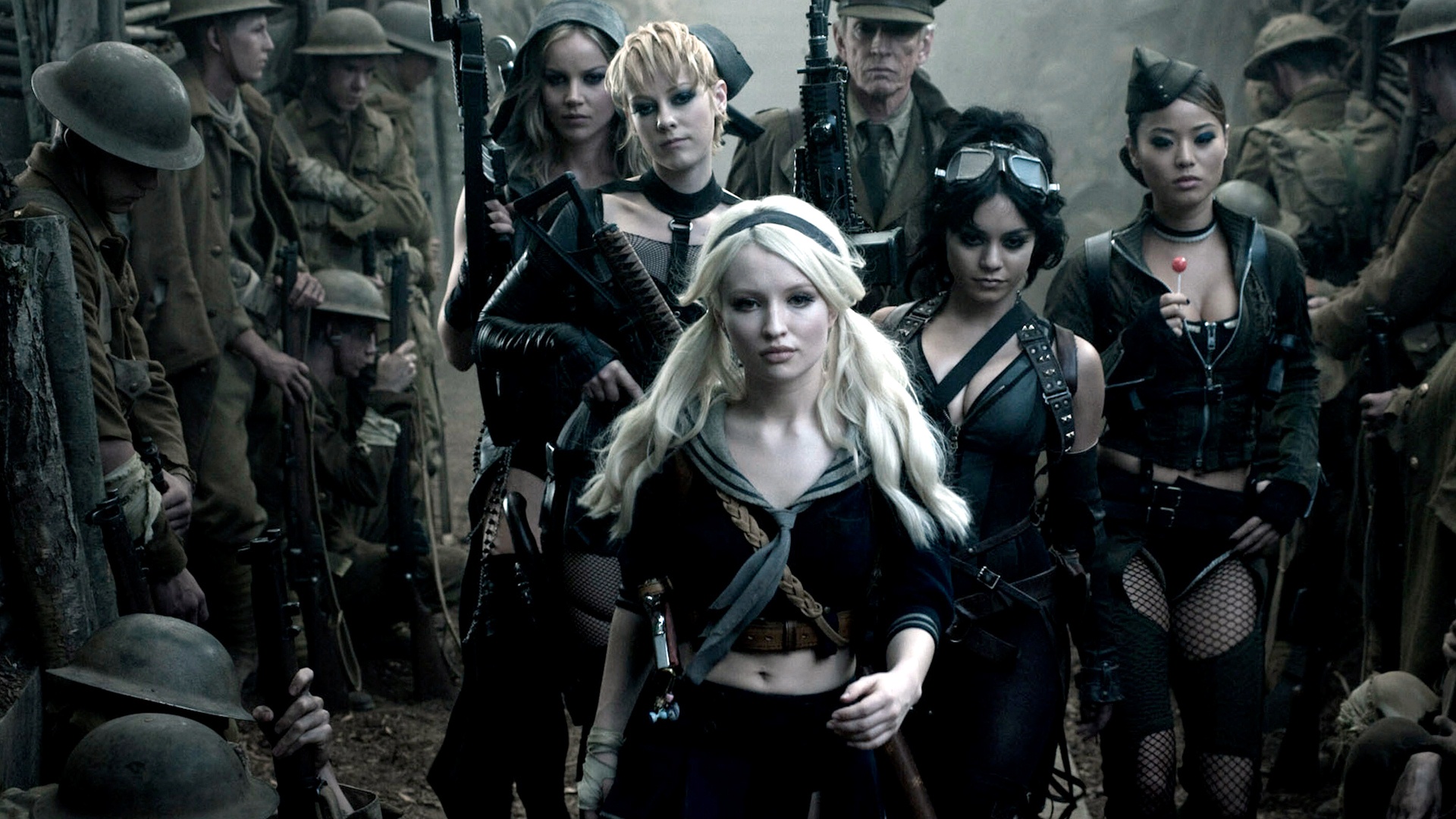 Often you fire up Netflix, and you’re not exactly sure what movie you want to see, but you know what kind of movie you want to see. You’re looking for fun, a kind of film filled with gunfights and martial arts and car chases and explosions, with a few laughs along the way. You want to see a vigilante go after the bad guys, or a criminal coming up with a big plan, or a certain piece of action play out in just the same way. You may also like a touch of science-fiction and fantasy tossed into the mix.

Throughout the course of his career as a director, Zack Snyder has made a lot of movies and gained a lot of fans, riffing on stories that were initially told elsewhere. He has made comic book movies, remakes of horror films, and even an anime feature adapted from a popular series of fantasy novels. Then there’s Sucker Punch, the first film directed by Snyder based on an original story, and one filled with showcases in his signature style.

The film follows Babydoll (Emily Browning), a young woman who is committed to an asylum and copes with her situation by constructing new, metaphorical layers of life. First, she imagines that she’s really in a brothel, and then she imagines that outside the brothel there’s a vast dark fantasy world where she and her new friends will fight a metaphorical battle against all sorts of enemies for their own protection.

What if the whole film had taken place after the Mexican Standoff? That’s basically the idea of Ben Wheatley’s Free Fire, a fun, R-rated good time. Set in the 1970s, the film starts with a meeting between IRA members and the arms dealer, but the difficulties emerge, the backs are stabbed, and the guns are unloaded.

There’s an undercurrent of dark comedy in the whole thing that makes the film even more enjoyable than you would imagine, and actors like Armie Hammer and Brie Larson are more than up to the challenge of letting their comic instincts show.

Frank Grillo’s unidentified ex-con — we’re going to call him Wheelman — has issues. His 13-year-old daughter is home alone with her sketchy, older sibling. His ex-wife is being sued for sole custody. He’s being pursued by a mystery guy on a motorcycle, and oh yes, he’s still in debt to the Boston mafia, which means he’s going to have to act as a getaway driver if he receives a call from his mystery boss, no questions asked.

It’s a tough state to be in, and it’s getting worse when an unidentified caller suddenly instructs Wheelman to drop two bank robbers at the scene of the crime and take off with their loot, which adds up to around $230,000 in cash.

Often you want to watch an action movie that puts as many scary things on the screen as you can, and sometimes you want an action movie that just gives you a glimpse that something exciting is going on under the surface. The Old Order, by Gina Prince-Bythewood, is a very, very fine example of the above group.

Charlize Theron stars like Andy, the leader of an elite paramilitary squad who all share one thing in common: they can’t seem to die, or at least it takes them a very, very long time to get there. Andy has been wandering the planet for centuries, fighting endless wars in the hope of saving others.

This is a film from the latest recipient of the Academy Award, Bong Joon-ho. Who is one of the greatest filmmakers in South Korea and knows how to make films dealing with diverse subjects and genres. This film is based on the French graphic novel Le Transperceneige, film stars Chris Evans, Jamie Bell, and Tilda Swinton. It marks the film debut of the director, Bong Joon-ho, in English. A TV program, which is a kind of follow-up to the film and graphic novel, both of which have made their debut on the TNT network.

The idea is simple and elegant — after an environmental catastrophe turns the earth into a barren ruin, residents of a never-ending train exist in essentially compartmentalized economic spheres, based on the class they were traveling on the day the world ended. The first-class passengers live in decadence, while the rear trains starve to death — until the weak and the starving have eventually had enough and taken a brutal revolutionary drive to the top of the rail platform.

By 1995, James Bond fans had not seen a new introduction to one of the most famous action franchises of all time in six years. It was the longest drought in the history of the franchise, and it meant that everyone was extremely excited to see what Pierce Brosnan had brought to the role of Agent 007. What we got was undoubtedly the best film in Brosnan’s entire tenure as Bond.

GoldenEye follows 007 as a “relic of the Cold War” as he tries to negotiate a changing world that involves a violent crime syndicate, a superweapon with the ability to devastate the United Kingdom, and an old comrade, Bond, that he had lost.

Brick and mortar video stores may be a thing of the past, but low-budget, direct-to-video action flicks are far from dead. Only inquire for Scott Adkins and Jesse V. Johnson. Over the last 15 years, the martial artist and stuntman-turned-director have created almost a dozen savagely violent action movies that would have been right at home on the racks of the favorite Blockbuster — if, you know, they still existed. Of course, the new partnership between Adkins and Johnson, Avengement, is their best yet. In the film, Adkins stars as Cain, a former martial artist who had partnered up with his criminal brother, only to quickly get stabbed in the back.

A seven-year spell in England’s most notorious gaol brought Cain to his limits, and now that he’s out, he ‘s going to do whatever it takes to hunt down his brother and get revenge. God supports everyone who’s trying to get in his path.