We would like to officially announce that Shueisha Inc. will be releasing “MANGA Plus Creators by SHUEISHA”, developed in cooperation with MediBang Inc. (Headquarter: Shibuya, Tokyo, Representative Director: Hideyuki Takashima; hereinafter, “MediBang”) on August 30th, 2022.

“MANGA Plus Creators by SHUEISHA” is a manga submission platform for English- and Spanish-speaking creators worldwide by Shueisha Inc., the publishing company represented by manga series such as One Piece and SPY × FAMILY, developed together with MediBang. This service will provide creators a brand new manga submission experience with community features that will allow for a connection between the creators and the readers.

MANGA Plus Creators by SHUEISHA, launched with MediBang 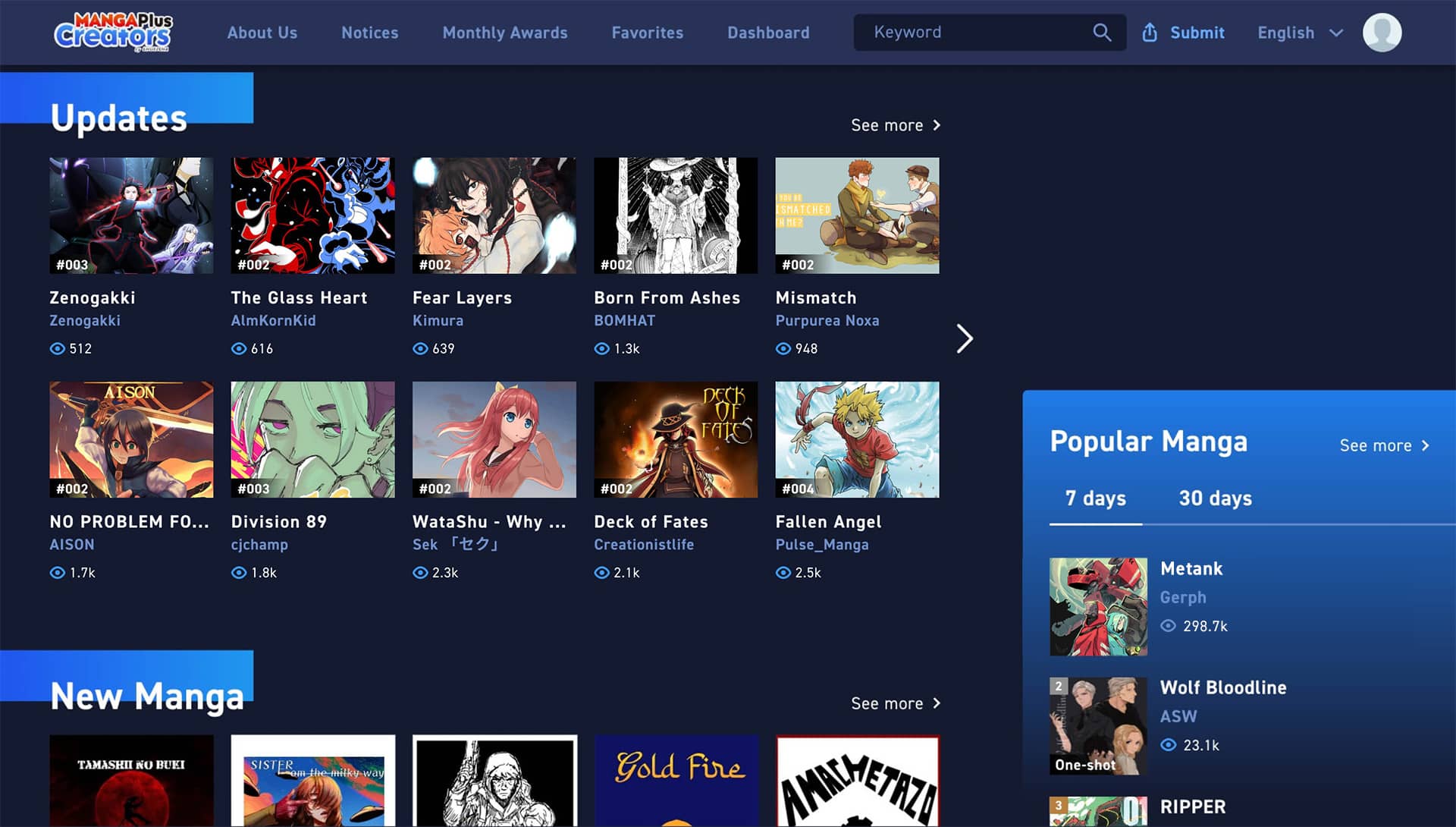 Screenshot of the homepage.

“MANGA Plus Creators by SHUEISHA” is a free manga submission service available for all English and Spanish-speaking fans of manga, linked with the manga reader service of “MANGA Plus by SHUEISHA” that releases works published under SHUEISHA for the global audience. We have prepared features full of benefits for both the creators and the readers. The platform will be accessible from anywhere around the world. Screenshot of the About Us page

Linkage with “MANGA Plus by SHUEISHA” publishing manga series such as One Piece and SPY × FAMILY!

Screenshot of the Creators page in MANGA Plus by SHUEISHA

The “Monthly Awards” will be held each month with various rewards including cash prizes up to a million JPY and official publication of awarded works on “MANGA Plus by SHUEISHA” next to One Piece and SPY × FAMILY as well as on the Japanese service of “JUMP+”. It will be available separately for English and Spanish submissions, by which the ranking will be determined by the score based on the number of previews and likes. The top 5 submissions of such ranking will be nominated for the monthly award. The editors team of SHUEISHA will review the chosen submissions to award the best work each month.

*There may be a month where only a few awards will be announced. ▽Screenshot of the Monthly Awards page

More than 90 brushes, 800 types of screen tones and a part of official fonts used on Weekly Shonen Jump available for free, the official JUMP app for manga creation “JUMP PAINT by MediBang” is linked with “MANGA Plus Creators by SHUEISHA” for easy, direct submission process.

Read various manga, including the work by a popular creator Saikomic, all for free! From the award-winning work of “100th Tezuka Manga Award 100th Anniversary Special International Department”, “Armados” by Saikomic and the honorable mention of the same competition, “The Tengu Trial” by Mochi; we offer a great number of manga for free, made possible exclusively with the renewal of ART street Comics page.