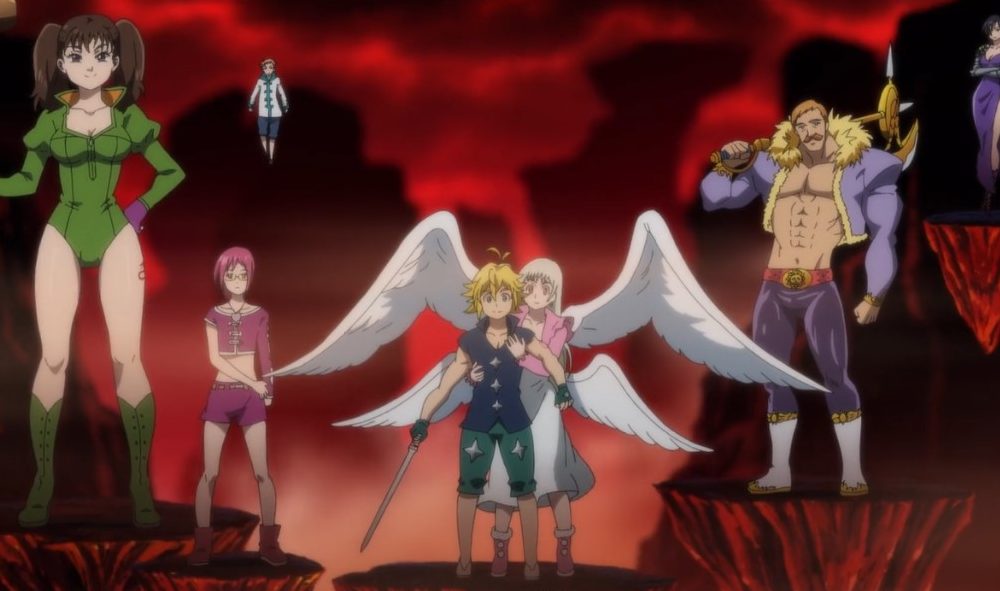 Mael used the power of the Four Commandments and became a strange being. He started slaughtering his friends one after another. Oslo was turned into a statue trying to swallow Sparkling Gem of Love. Mael destroyed everything, but King decided not to give up on Diane. He turns into a true form of Fairy King and vows that he will protect everyone. King wanted to die at first, but he realizes that there are friends who he loves, and he can not leave them like that.

The true power of the Fairy King Harlequin awakens. Diane notice that King’s aura has changed, and he has turned into King that she doesn’t know. King told Diane not to worry; it is still him, and Diane is surprised that King can read her mind. He told Mael that they could wrap this fight quickly. Mael started chanting that he hates Elizabeth, but he wants to make her belong to him. King notices that steam of curse is flowing out of Mael.

Episode 8 will be available on its official platforms on Wednesday, 3 March 2021, at 5:55 JST on Netflix. Read Seven Deadly Sins Season 5 Episode 7 Preview and Recap.

Mael unleashed another red Sparkling Gem of Love and said Elizabeth’s corpse, heart, and soul belong to him. He wanted to kill her so that he won’t ever see her with Meliodas again. Mael’s heart is broken since he has worked all of his heart trying to impress Elizabeth. But she chooses to be with Meliodas from the Demon Race clan instead of an Angel. King told Mael that what he is thinking will never happen. 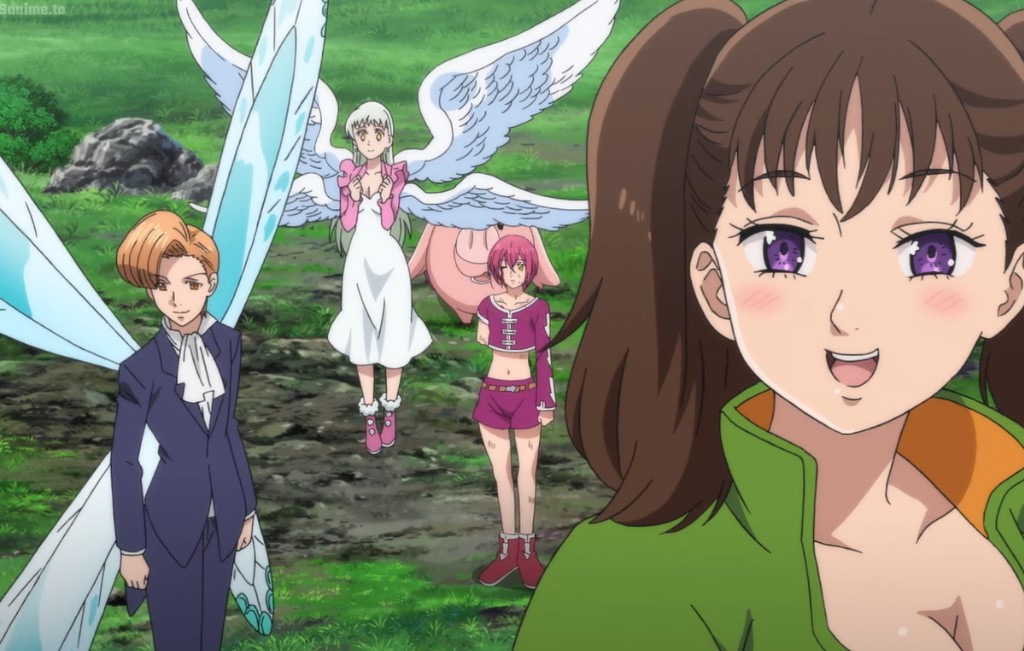 He encircles Diane and Elizabeth with True Spirit Spear Chastiefol Eighth Form Pollen Gaden. Diane realizes that King has shielded them, but he won’t be able to use Spirit Spear. Before King replies, Mael charges and receives a shower of hammer blows. Others notice that it is for the first-time when in a battle that Mael is getting punched, and his body started pouring blood. King turns his Guardian into True Spirit Chastiefol Second Form.

The Guardian sends Mael flying, and he smashed with the ground. Diane is impressed that King can unleash multiple Spirit Spear Forms at the same time. Mael attacks King with Scythe of Silent that got crushed. King increased his Spirit Spear to the Fourth Form. He told Mael that they don’t know each other well, but they share the same thing in common. They both have lost precious time, friends, and beloved ones, but they cannot get back what they have lost.

King advises Maelthat he can still protect things that he has now and the one that cares about him. But Mael told King to stay out of this, and he attacks with Arrow of Salvation. King blocked the attack with Sword of Chastiefol and told Mael that revenge only fuels hatred. He decides that he won’t kill Mael he will bring he back to the right path even if it takes more than thousand battle. Mael started screaming in pain, and Diane asks why.

King reveals that Mael has reached his limit, and there’s no way to save him. Gowther asks Captain of Scraps to help him with something. Even if Mael is one of Four Archangel, he took in the power of four discordant Commandments. Gowther jumps from the top and uses Invasion to enter Mael Soul. He finds Mael near the hill where he used to wait for Elizabeth. Gowther told him that he wants to save him from the darkness that he is in. 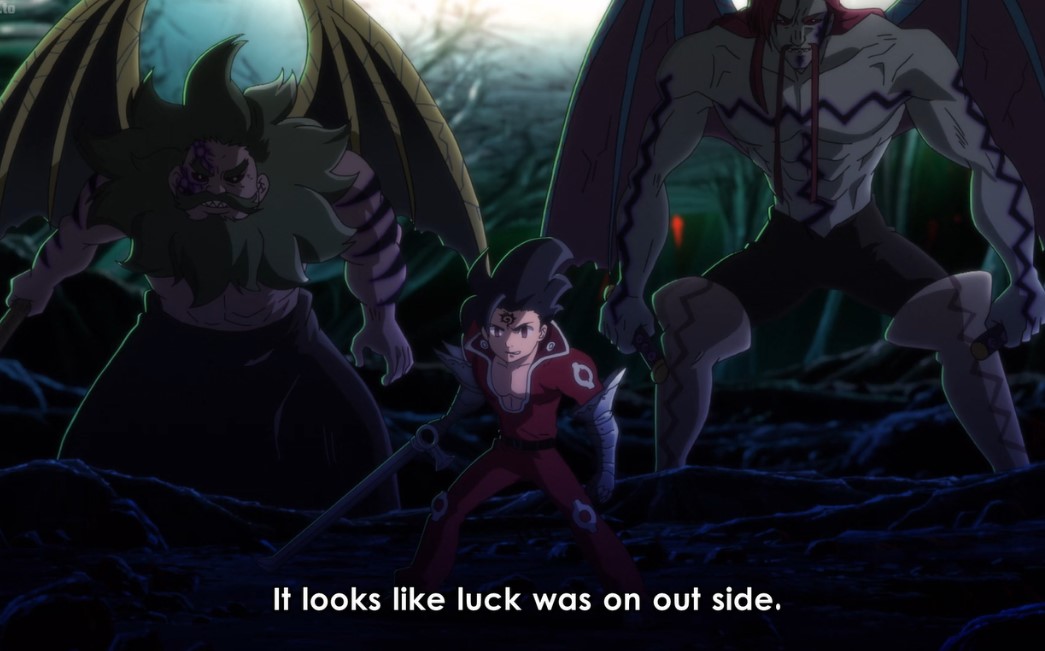 Mael replies that he wants to be alone in peace, and he needs no one to save him. He battles with Gowther, who is trying to save him and chase him out of his soul. Gowther is still hanging on Mael in the real world, but Mael’s body started to be engulfed with fire. King and others just saw a huge of light and explosion and think that Gowther has failed. After a blast, Gowther is falling from the sky; out of nowhere, Mael is back to normal and saves Gowther before he hits the ground.

They both land to the ground and Mael uses Dorimashito Inimashito Ragiwosuya to heal the injured ones. He also uses a spell that will help Diaire and Oslo’s soul to be reborn a single time. They will also regain the memories of their past, and he accepted that if they wish to punish him, he will accept. Gowther said he would also accept the punishment since he is the root cause of the problem. He asks Mael to come with them to Camelot.

Mael said it means he has to destroy Demons as Goddess. Elizabeth came and told Mael that it is not the victory of the Goddess of Demmons. They are going to end the Holy War once for all. At the same time, King grows a tree and acquires new costumes. Meanwhile, at the Dark Territory, the battle between the Sins and the Demon Race continues. Cusak comments that never underestimate the regenerative powers of the Supreme Rank Demons. Meliodas and Ban are also facing the Demon King.

We will find out next week how Meliodas will battle his father, the Demon King. Make sure not to miss the latest episode every Wednesday.