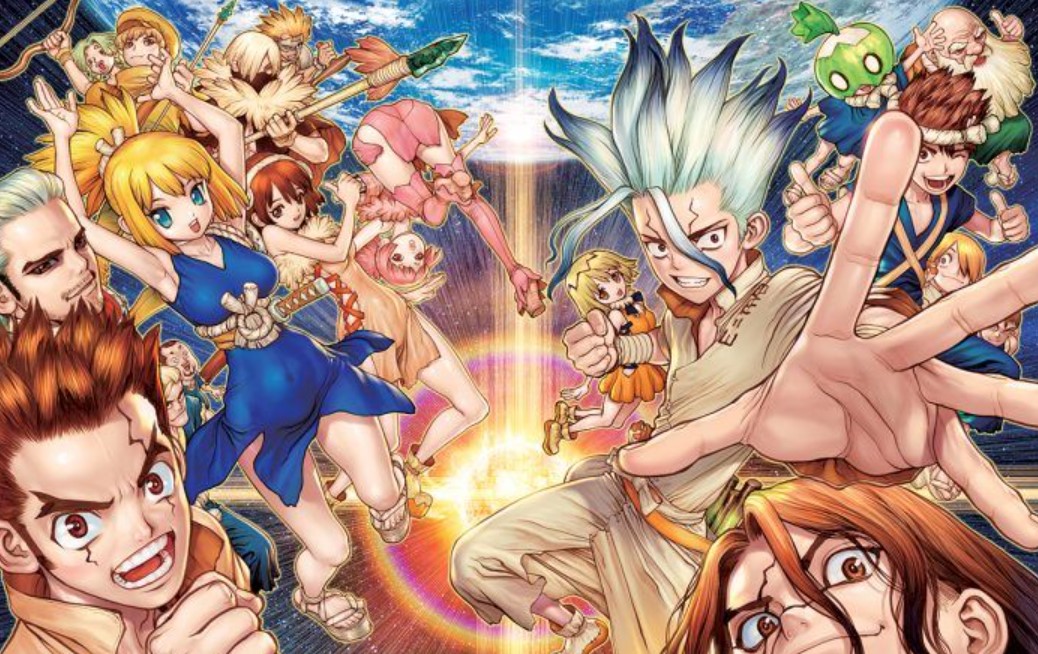 The final battle is about to begin; let’s see what Dr. Stone’s recent development offers. Today’s chapter is titled: Cyber Guerilla. Francois, Mitsukaze, Suika, and Ginro and surrender in front of Staley and his gang. Francois puts on an act since she realizes that they will be sniped out if they don’t cooperate. But she has sent the signal for Senku and others to know the location of the enemy. Senku has received the signal, and he knows what move he has to make.

The enemy’s location is the key to the final battle against Stanley’s gang. At Senku’s base, Gen told Senku and Suika to be more careful. He comments that Suika and the others are under Stanley’s custody. Gen started to talk about the hero who will save their comrades. It was too late for him to think about it since Kohaku has already made a move. Gen comments that he knew that Kohaku won’t stay quiet. Kohaku is charging at full speed to save her friends.

Ryusui notices that Kohaku is speeding fast and comments that it is risky. But it might be the best cause of action. Senku agrees with Ryusui and said their victory would be an easy one. He orders the crew to activate the petrification device before Stanley’s gang shows up. Senku knows that Kohaku will delay them from arriving at the battlefield. Senku comments that a little preemptive guerilla warfare is the only way to slow down Stanley’s gang.

It will also buy them some time, and Saseki started to activate the petrification device. Meanwhile, in the forest, Suika is wondering how powerful the enemies are. Stanley’s gang followed Suika and other’s footprints to reach Senku’s base. Kohaku is moving on top of trees observing the enemies. Kohaku finds that the one leading the enemies is the soldier. The second one is their leader, who is looking front and overhead. 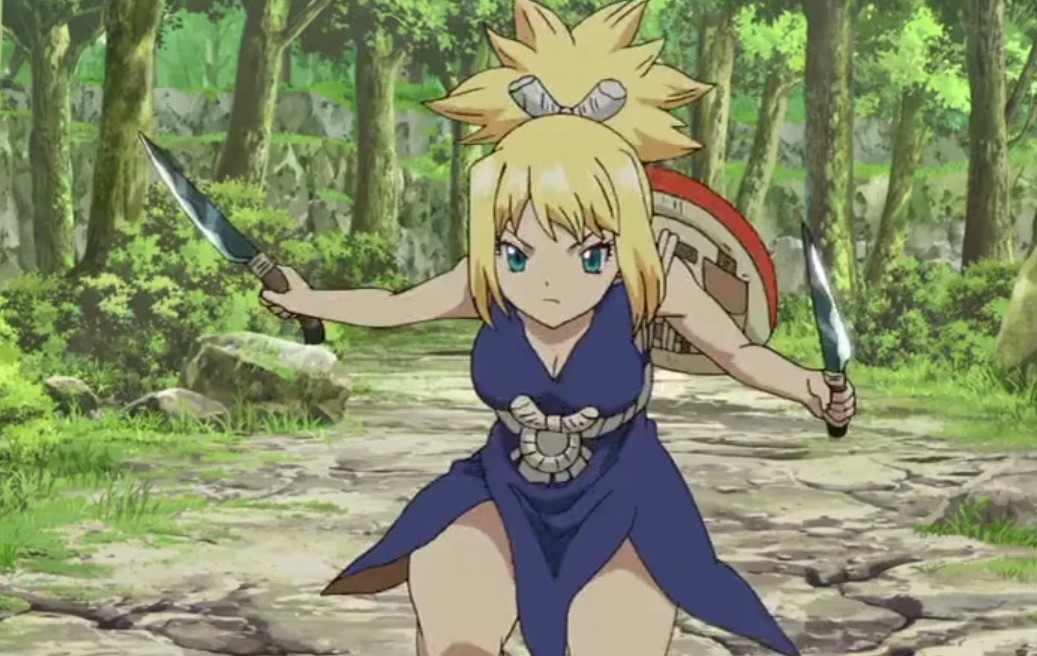 The enemies are too careful, and they are maintaining a little distance between them while moving. They don’t have a single opening that anyone can attack. Kohaku is surprised when Hyoga and Tsukasa arrive behind her. Tsukasa comments that they followed here since they are facing professional warriors from the 21st century. Hyoga said that he saw Kohaku running and thought her brain had turned to mush.

But he is impressed that she did not rush into battle with the enemies. Hyoga said they have come prepared just like Kohaku. Tsukasa comments that the enemies have been trained for any combat scenario. The two unleashes a remote-controlled record player designed by Chrome. Kohaku realizes Chrome created this trap. They started to play sound like they are attacking. Stanley’s gang started to panic and shouts ambush.

Ginro is wondering who is shooting at them, and Stanley’s crew started to waste the bullets of their machineguns. They think that they are fighting with the enemies. Maya unleashes her blade to counter the enemies. Tsukasa and Hyoga are trying to separate the enemies so that they will get a chance to rescue their friends. Kohaku asks if the enemy has spotted them since Maya looks like she is coming in their direction. 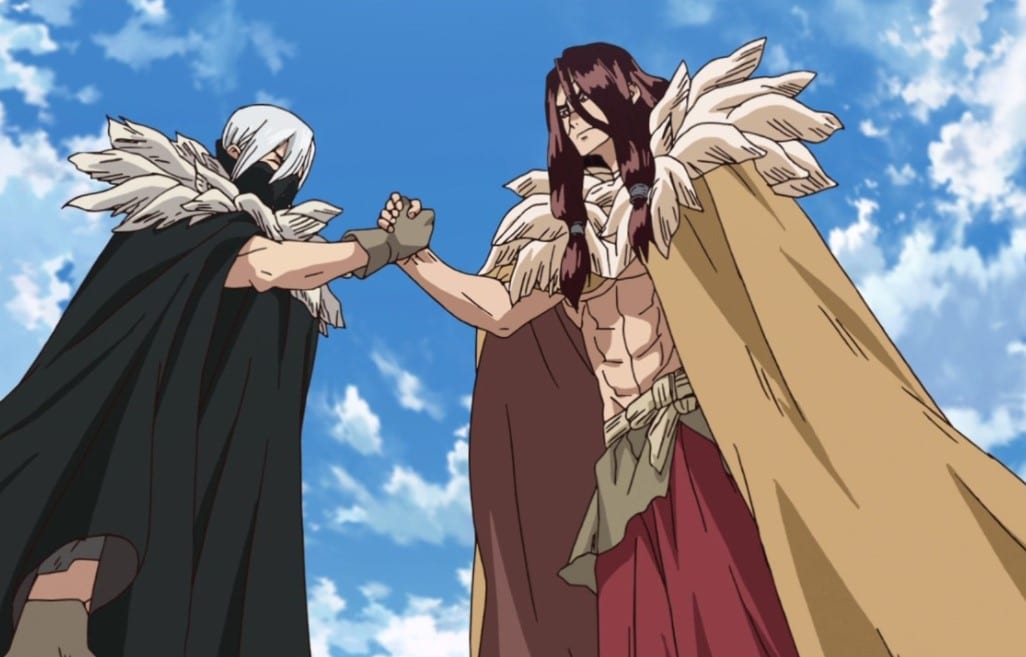 Kohaku said that now is their chance to rescue their comrade. But Tsukasa reveals that Stanley has not changed his position. If they get involved in a battle, Suika, Francois, Mitsukaze, and Ginroi will be killed. Hyoga said they must first destroy Stanley’s gang transceiver. Their victory will be guaranteed since the enemies’ communication will be cut off. Hyoga told an impatient Kohaku that they would have held a blade to Xeno’s through and ask Staley’s gang to surrender.

But they didn’t consider playing that card since Stanley’s gang had Nikki and a dozen ofSenku’s allies. Tsukasa said that the battle is now a stalemate. If they try to hurt Xeno, their allies will be killed within a blink of an eye. Once they lost the line of communication, that’s when they will attack. Hyoga said once that happened; they will start to torture Xeno for Stanely to surrender. Maya manages to find the trio and the trio vows that they will fight and destroy the transceiver.