Comedies have a way of making it to your heart and staying there for a long time. This applies to work of any kind – be it literature, cinema, or anything else. One of the best things about the genre is that it is meant to do just one thing: make you feel good. What is there to not love about this idea? Family comedies especially take the cake here since you get to enjoy them with all your loved ones.

There are several films to choose from here. You could go for the classic animated kind, you could pick comedies that revolve around actual themes of family, or you could go for an unconventional rom-com or two. Either way, you are bound to enjoy whatever you pick. But again, if you are someone that doesn’t enjoy a myriad of options thrown at you at the blink of an eye – we feel you. We feel you, we see you, and we’re here to help you out. Listed below are six films that you could watch with your family and have a laughing fit of the best kind. Read on if this is something that interests you! So we’ve got an Adam Sandler movie in the least. Are we surprised? No. But do we already know that this would work? Of course!

Believe us when we tell you that Blended is the family comedy of your dreams. Having premiered in 2014, it is a classic Sandler film. Which means you will be giggling throughout. Love him or hate him, you know this is true even if you do it ironically. The film features the following stars in lead roles:

The movie was written by  Clare Sera and Ivan Menchell and directed by Frank Coraci. The plot of the film follows two drastically different individuals and their families. After g9ing on a blind date with each other, there begins a mutual hatred between the two. Little do they know that after going on a family vacation, they would meet again. This is a movie about a blended family that you would come to love in the end. You already know that the romance is lurking somewhere in the corner, but that doesn’t make this movie any less enjoyable. In fact, the predictability gives you more space to actually get into the plotline! Chances are, you’ve already watched this film. Who hasn’t? But if you’ve been putting off a re-watch of this classic, this is your cue to get right to it.

This is one film that everyone should watch at least once in their lifetime. This is not only because it introduced Lindsay Lohan to most of us but also because it follows a genuinely interesting story. Premiering in 2003, the movie was directed by Mark Waters. It features Jamie Lee Curtis and Lindsay Lohan in Dr. Tess and Anna’s lead roles, respectively.

The plot of the film follows this mother-daughter duo whose relationship is troubled. Things take a weird turn when they wake up one day to find out that their bodies have been switched! They now have to live with each other’s lives and are forced to deal with everything that it entails. This movie is funny and heartfelt and is a great pic to watch with your family. We wouldn’t know what to do with ourselves if we didn’t throw a couple of animated films on the list because family is what they are made for. But don’t let us tell you what to do, check out Spies in Disguise yourself, and you will know why it’s in the mix.

This 2019 film is a comedy directed by Nick Bruno and Troy Quane. The movie’s plot follows the ordeals of a secret agent called Lance Sterling, who is suddenly turned into a pigeon one day. Sterling soon finds out that an evil mastermind is using his identity to hatch a dangerous plan. To stop this, he teams up with Walter to try and develop a strategy to fight him. This movie is more than suitable for both kids and adults, which we look for in family comedies. So if you are in the mood for some animated goodness, Spies in Disguise is here to keep you entertained.

4. A Babysitter’s Guide to Monster Hunting

This is a relatively new film and a grossly underrated one at that.

This is a movie that came out in 2020 and is lauded for its fresh and new aesthetic. The film was directed by Rachel Talalay and featured the following stars playing lead roles:

The plot of the film is simple yet gripping. Kelly Ferguson is a babysitter. Her life is pretty much similar to the rest of us until all of that dramatically changes overnight. A child in her care is kidnapped on Halloween night. It gets weirder as she realizes that the kidnapper is a  Boogeyman. It is now her quest to find and rescue the child before harm befalls them. While at this, she discovers that she isn’t the only babysitter on the trail. A whole group of them are on a journey to protect children from monsters, and they now band together to complete this mission. 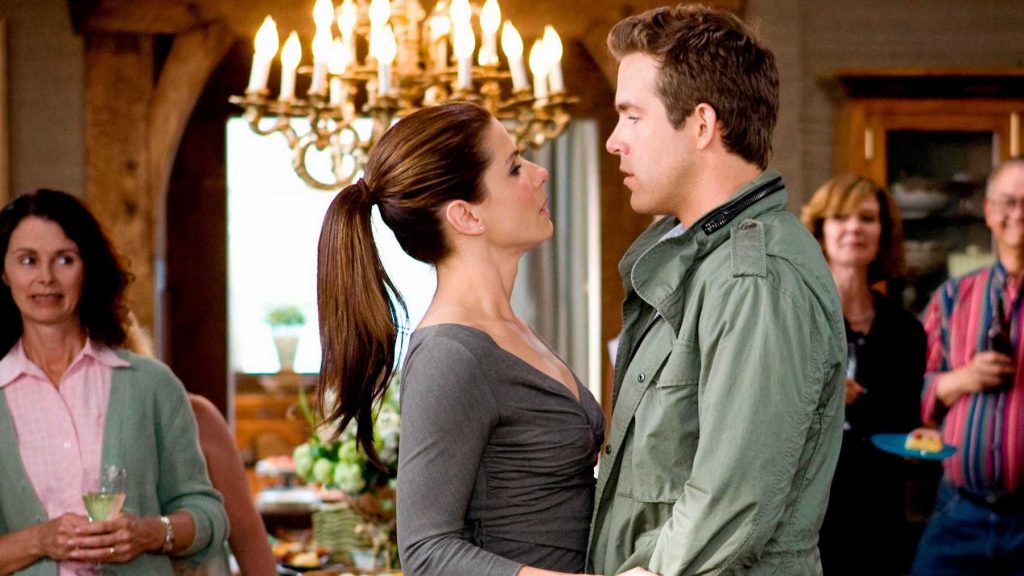 Sandra Bullock fans, now are your time to shine. Have you ever put on a movie featuring your favorite star, only for your family to absolutely refuse to watch it? Well, things might change with this family comedy.

The Proposal is a romantic comedy that came out in the year 2009. Directed by Anne Fletcher, the movie sees stars Sandra Bullock and Ryan Reynolds in the lead roles. The plot of the film revolves around a seemingly ruthless New York editor Margaret. As she is faced with possible deportation to Canada, she now has to develop a plan to stop this from happening. To do this, she convinces her assistant Andrew to marry her. It seems like a win-win situation for them all – she gets to stay, and Andrew gets a promotion. However, his hometown trip puts both of their feelings in check, and unlikely romance blossoms.

The movie is everything it poses to be and more! If you are in the mood for some romance, this movie is what you should go with.

Finally, we bring you a film that has managed to gain a place in many people’s lives this year. Soul a 2020 Pixar film that almost everyone seems to love, and we know why. If you haven’t watched the film yet, we hope we convince you to do it very soon!

The plot is heartwarming, to say the least. It deals with Joe, a middle-school band teacher who is somewhat dissatisfied with his life. Things haven’t gone according to plan, and there is nothing much he could do about it. He is passionate about Jazz, and that is the one thing he would like to pursue truth. Things take a turn for Joe when he travels to another realm to help people find their own passion. While at it, he discovers the secret to holding on to your dreams: it is to have what the makers call “Soul.”

Read More: Godzilla vs. Kong: Film to Premiere in May 2021 – Here is What You Need to Know