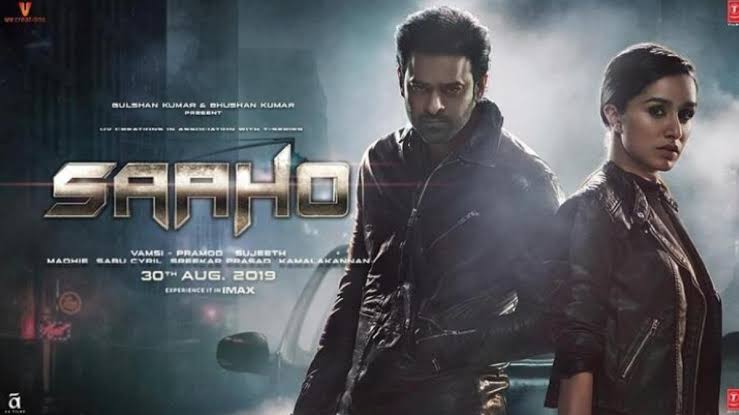 Written and directed by Sujeeth Reddy, Saaho is an Indian action thriller film. The film is about the death of an underworld criminal followed by the legacy of acquiring the throne of the upcoming leader of the gang. It was released on 30th August 2019. The film was produced by the trio of Pramod Uppalapati, Vamsi Krishna Reddy, and Bhushan Kumar, under their respective production houses  UV Creations and T-Series. The film stars Shraddha Kapoor and Prabhas in the lead roles. For Prabhas, this movie was his Hindi debut, as the film was also released in Hindi. Meanwhile, for Shradha Kapoor, this film would be her South Indian debut. The film got released in three languages- Tamil, Telugu, and Hindi. The film was distributed by AA Films, Yash Raj Films, and Phars Film.

The filming of the movie started in August 2017. It took two years for the film to reach theatres and finally got released on 30th August 2019. It was produced on a whopping budget of ₹350 crores, making it one of the expensive Indian movie. It was filmed in four different countries- India, Romania, the United Arab Emirates, and Austria. After its release, the film collected a total of ₹433 crores globally. 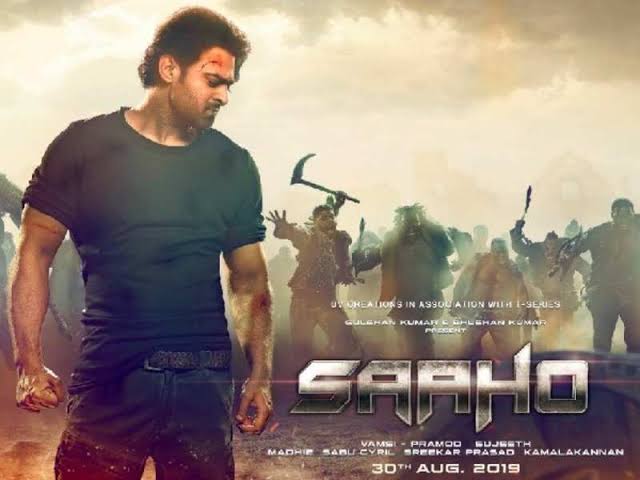 The initial schedule of the movie was filmed in Hyderabad. It was completed by the month of October 2017. For the second schedule of the movie, Ramoji Film City was chosen, which started in December 2017. The major action scenes of the movie were shot in Dubai. The crew, including Prabhas and Niel Nitin Mukesh, shifted to Dubai for completing their action sequences. Meanwhile, Shraddha Kapoor continued with her another project, Stree.

Approximately half of the film was shot in Mumbai, Dubai, and Hyderabad. The fourth and fifth schedule of the movie was shot in Abu Dhabi and was completed at the end of the month of February. The final scenes of the movie were shot in Dubai and Romania. Austria was chosen as the location for the shooting of soundtracks of the film.

The film contains a lot of action sequences, of which most scenes were shot in Dubai and Abu Dhabi. A long screenplay of action scenes was shot near Burj Khalifa, and it cost around ₹25 crores. These action scenes required the actor to be physically fit. For this, Prabhas underwent strict training programs like plyometric obstacle races, strength training, weight training, and cardio training. Apart from Prabhas and Shraddha Kapoor, other actors like Jackie Shroff, Niel Nitin Mukesh, Lal, Arun Vijay, and Mandira Bedi were also included in the film. According to the producers, a large chunk of the budget of the film had to be spent on the action scenes. Kenny Bates, who is an international stunt coordinator, was hired for the choreography of the action scenes in the movie.

Saaho also presents some breathtaking underwater scenes, which include Prabhas.
During the preparation of the movie, Prabhas learned scuba diving so that he could perform the underwater scenes without the help of a stuntman. Prabhas had also decided to dub his lines himself without using a dubbing artist for the Hindi version. Although the voice of  Shraddha Kapoor had to be replaced by a dubbing artist for the South Indian counterparts like Telugu and Tamil. Prabhas plays the role of a police officer in this film, while Niel Nitin Mukesh and Mandira Bedi both play negative roles. Previously, Mandira Bedi has been seen doing negative roles on the smaller screens.

There are two romantic songs in this movie. Both of which were shot by choreographer Vaibhavi Merchant. She is known for her excellent work in movies like Jab Tak Hai Jaan, Dhoom 3, Bhaag Milkha Bhaag, Fan, Befikre, Sultan, OK Jaanu, Loveratri, and Bharat.

The shooting of these two songs in Saaho began Alpine City of Innsbruck, Austria. The towns of Seefeld were also chosen as a location for the shoots.

What is the plot of the movie Sahoo?

The underworld criminal named Narantak Roy, belonging to the city Waaji gets murdered in Mumbai due to a car accident. After Narantak’s death, his son Devraj declares himself as the leader of the crime group. Although he is favored by some members of the syndicate but also opposed by other members. Kalki, who is the legal advisor of the family of Narantak Roy, discovers a secret. Ibrahim tells Kalki about Narantak’s other son, who survived, and this secret was kept throughout the 25 years. His son’s name was Vishwank. Vishwank spoils the plan of Devraj and himself becomes the leader of the crime group. Vishwank also plans to unravel and find out the assassinator of his father.

An electric power-plant had been set up by Roy, but the external affairs minister of India had opposed it. Somehow, Roy managed to get the signature on the letter from him. The money of the criminals gets destroyed during a bomb blast on the ship.

The scene then transits to India, where a mastermind successfully steals two trillion rupees. A national manhunt was assigned for the thief. Ashok Chakraborty was initially acquired as the leader of the task-force for catching the culprit. He refused to lead the time but changed his decision the moment he heard Amritha Nair, would also be a part of the investigation team. Ashok was attracted to Amritha, so he agreed to join back the team. The investigation team discovers a thief named  Jai and track him during his next crime. Meanwhile, performing the operation, Ashok, and Amritha fall in love.

The entire police department gets shocked when they realize that Jai was actually the real Ashok, working as an undercover police officer. The officer who fell in love with Amritha was Saaho, who was the real person committing all the crimes and thefts.

An interesting twist comes when Amritha makes Saaho believe that she is still in love with him, but in reality, she is helping the police officer Ashok in tracking Saaho and their partners. Later, with time she falls in love with Saaho and betrays the police officer. When Saaho tries to kiss Amritha, she gets shot by Devraj, who takes her away. Saaho then demolishes Devraj’s building and steals the money he had with him.

Meanwhile, Kalki, who was believed to be on the side of Vishwank, turns out that in reality, Kalki was in Devraj’s side and was helping him out. She then visits the secret vault and gains access to it using Vishwank’s fingerprint. It turns out she had allegedly stolen it earlier from Vishwank. After getting access to the black box, she gets the pictures of Roy and his son. Kalki then finds another interesting thing in the vault, which was a Bhagwat Gita. These were two of the most precious things that were present in the vault.

Then, Shinde takes Saaho to Karana village. There Saaho fights with the goons of Devraj. The goons are defeated easily. When Devraj finally arrives, Saaho tells him that he is the real son of Narantak Roy. His full name was Siddhant Nandan Saaho. He then reveals that all this was done to avenge the death of his father. Later Vishwank and Alex also reveal the secret to others. Ashok and Amritha get to Know about it soon. When Kalki tells them about the picture of Roy and his son, it shocks all of them. Saaho then kills Devraj, taking revenge for his father’s death.

Later, Ibrahim reveals that the secret he told them about Vishwank was not true. Vishwank was not Roy’s son. Vishwank was Ibrahim’s son. Then Saaho’s real identity gets revealed in the gang, and they accept him as the new leader of the underworld.
In the end, Saaho locates Amritha and meets her. He shares his feelings about her, and they both hug. The next moment Saaho realizes a sniper aiming at him. This leaves the film with exciting suspense, which could be revealed in the second chapter of Saaho.

The expected release date of Saaho Chapter 2 is around August 2021. Since the initial shooting of the film started in August 2017, and the total time taken by the film to reach the theatres was two years. There are hints by the director about Chapter 2 of Saaho; it might take some more time. Amid the pandemic of COVID-19, the release date of the film might get delayed.

Controversies regarding the Film Saaho

1. The first look poster of the film was released on the birthday of Prabhas on 22nd October 2017. Lots of people criticized the poster for plagiarism, as the poster looked much similar to that of Blade Runner 2049.

2. A complaint was filed against the director of Saaho by Outshine, a bag manufacturer.
The manufacturer alleged that they signed an exorbitant deal with the filmmaker of Saaho, and were promised by the team that the product of Outshine would be shown in the film. Although the promise was not fulfilled by the filmmaker. Outshine claims that they had to bear a total loss of ₹1.38 crores in advocate fees, contracts, and marketing.