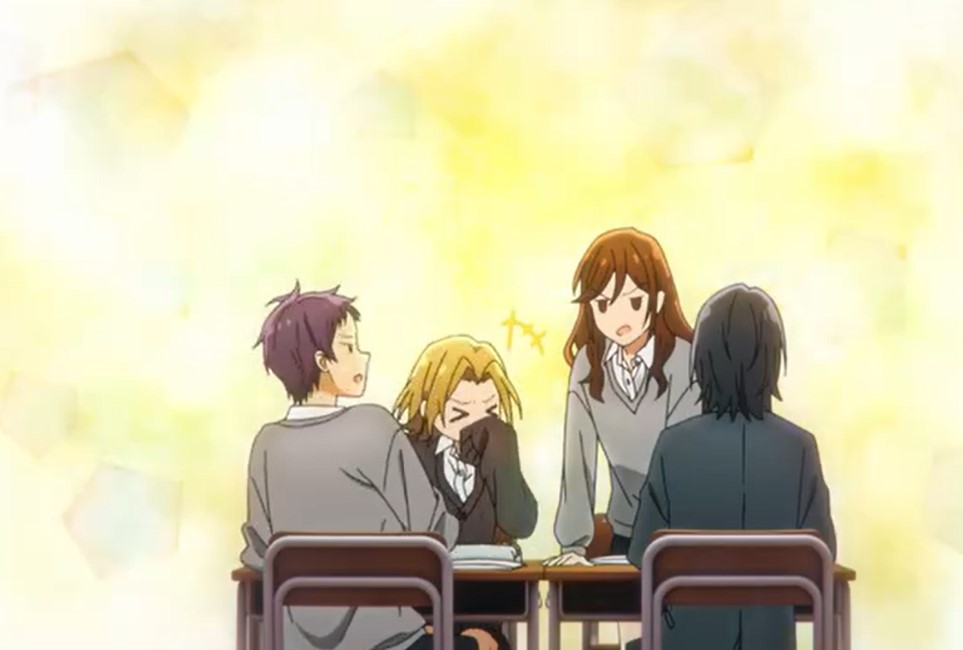 Miyamura remembered his childhood life when he uses to be the odd one out in school and at home. Other students used to left him behind. No one wanted to be associated with him even when they are doing group work. Miyamura did not care about anything, and he just accepted that he would remain a loner. Other kids find him boring, and they always tease him that he is so gloomy. One, when they were doing a science experiment, he was left out alone.

The popular guy in the class asks someone to take Miyamura, and no one agrees. He did his schoolwork alone, and after school, Miyamura makes a hole in his ear using a needle to wear earrings. He comments that the school is har looking at the mirror while his ears are bleeding. On the first day of high school, Hori asks who is that guy sitting alone, and Yuki replies that it is Miyamura.

Horimiya Episode 4 will be released on Sunday, 31 January 2021, at 12:30 AM. Those who would like to stream or watch this Anime officially can visit Funimation and AnimeLab. This Anime is available on different streaming platforms. A new episode will be released on Sunday, and the updates will be available as soon as possible. Take a look at the following development. 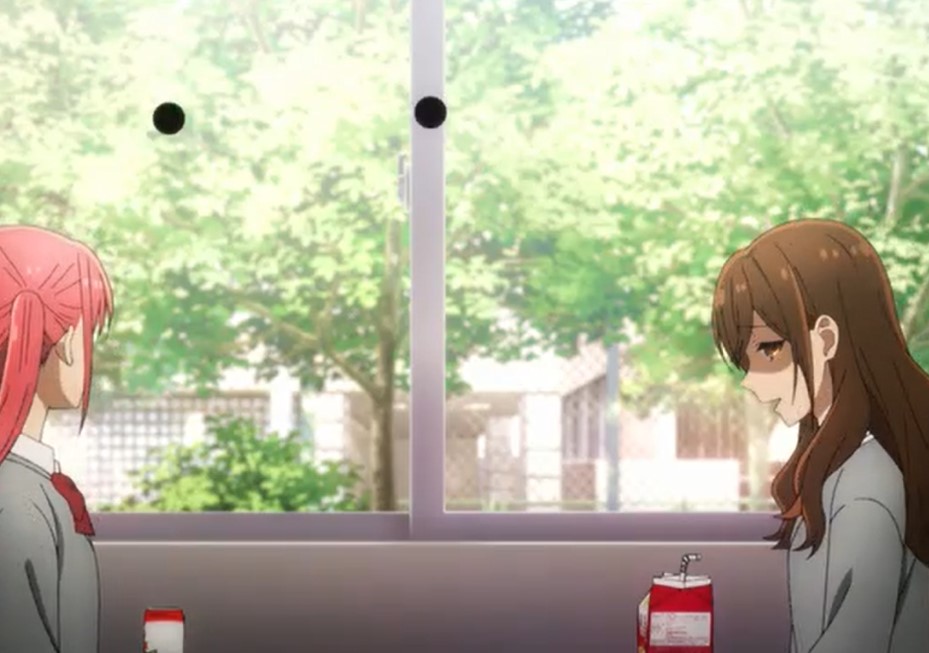 Hori confronts Miyamura, asking him what he is doing, and Miyamura said nothing. He couldn’t look at Hori. Hori introduced herself to Miyamura and told him that he should at least know the names of people in his class. Miyamura looks up straight to Hori as she told him about what everyone thinks about him. She told him that they think he is all dark and gloomy, and that’s why she is talking to him. Miyamura looks down, and Hori comment s that he looks normal and smiles.

Miyamura thinks that Hori is weird. Back to the present, the students check their names on their boards, looking as to which class they belong. Ishikawa is glad that he is in class 1, and he said that’s love since Hori is in class 1. Hori asks Miyamura, who told her that he is also in class 1. They both head to their classes and start working on group work. His past still haunts Miyamura since he can believe that people now come for him.

He doesn’t bother to ask anyone to befriend him or include him in school work. Hori and others gathered at his table and started working on a science project. Miyamura is wondering if he really belongs here since he is a loner who has no friends in the past. Yuka, Hori, and Ishikawa made Miyamura the group leader, and he is just quite watching them working. Later Miyamura went to the tennis court and started wondering, sitting alone.

He asks himself if Hori, Yuka, Ishikawa are his friends since he never had one in his life. Now his life is filled with joy and laughter. He also asks himself if they are cool with him being around them, and Ishikawa shows up. He asks Miyamura what he thinks, and Ishikawa notices that Miyamura was not listening to what he was saying. Miyamura asks Ishikawa what does he think of him. Ishikawa said he doesn’t have to ask him with a creepy face.

He is annoyed about Miyamura getting along so well with Hori, and he never says what he means. Ishika said that Miyamura acts weird and Miyamura is too nice to people; he will have to keep an eye on him. Ishikawa also talks about the other side that Miyamura show when he is not around the school. He comments that when he put his hair up, he looks prettier than most-girls. Miyamura comment that he is pretty. 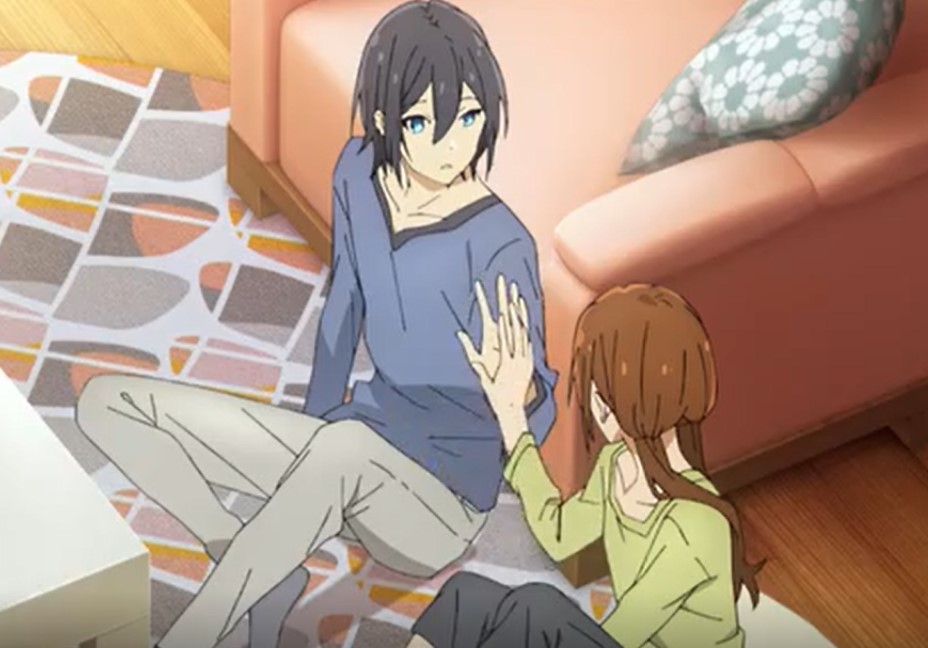 Ishikawa gets angry, thinking that he tricks him into saying those words. After some time, Ishikawa appreciates what Miyamura has done so far. Ishika comments that he wonders what Mioyamura thinks about him. Miyamura told Ishikawa that everything that is happening in his life now is the first time he is experiencing him. Ishika said that it doesn’t matter whether he is weird or awkward he is okay.

Miyamura wishes that he thinks he could travel back to his past and fix everything. They both head to the class, and Hori punishes them for being late. She scolds them for not getting the report done after lunch. Later Ayasaka met with Hori, and she asks her about Miyamura, commenting that he is handsome. Ayasaka asks Hori if she is dating Miyamura or his girlfriend, and Hori replies no.

Ayasaka ask her if she can have him since the two are not dating and Hori picture Ayasaka with Miyamura. She concludes that she is not giving Miyamura to Ayasaka, and the two started quarreling about it. Hori left after winning an argument. She concludes that Miyamura belongs to her, and when she reaches the class, she started wondering what she was doing.

Later Miyamura visited Hori, and they watch the movies together. Hori touches Miyamura’s hands and confesses her feeling, and Miyamura looks at her. Hori said she loves his fingers, and Miyamura said the same. Miyamura realizes what she meant, and he ends up confessing his feelings. Hori is glad that now Miyamura belongs to her.

That was all about today’s episode, as soon as a new episode is released. We will be releasing a new upcoming episode. Read Horimiya Episode 3.