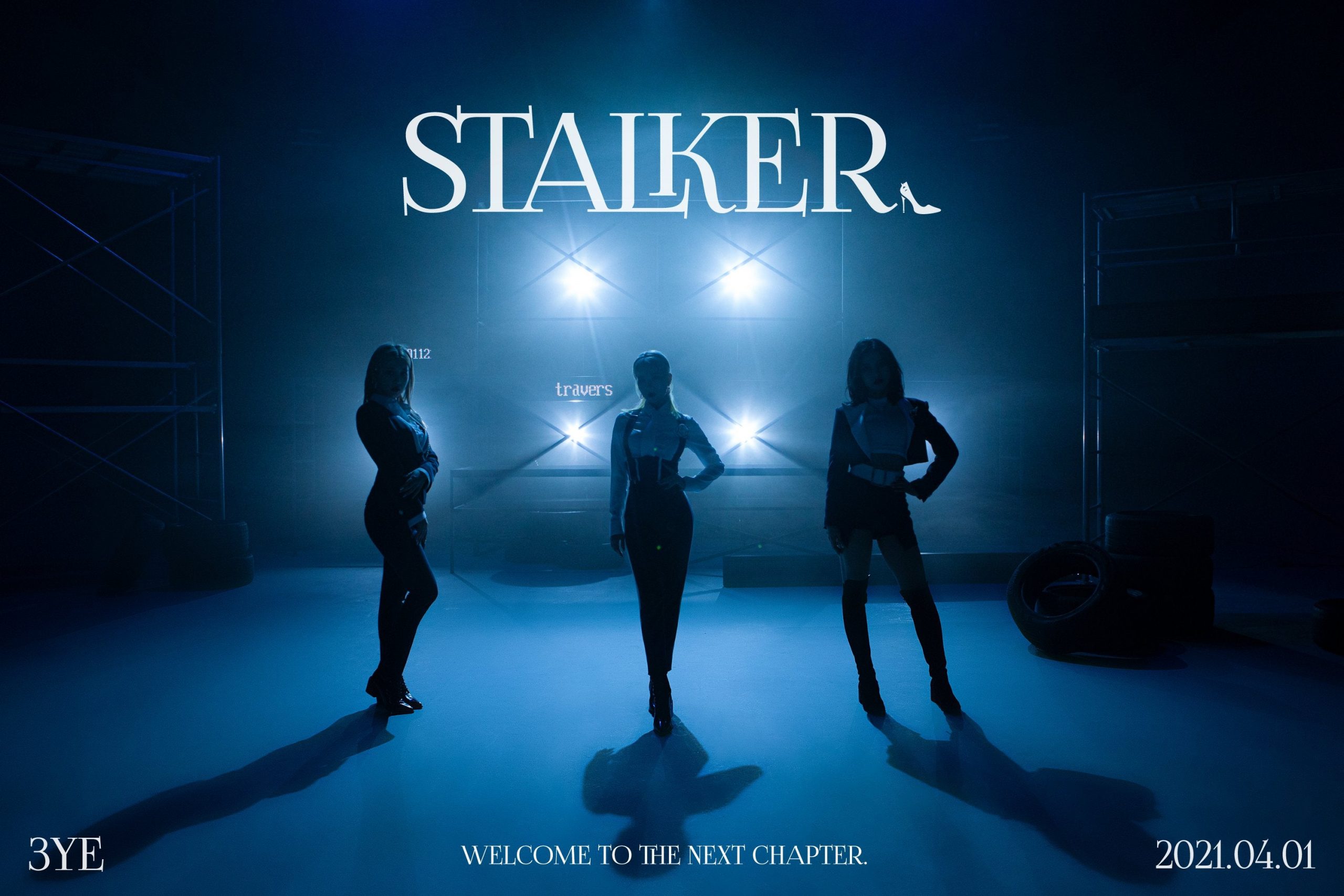 3YE teased their upcoming return ‘Stalker’ on April 1, 2021(12 PM KST). They posted Teaser photos on Twitter. In the first teaser photo, 3 members are standing with stage lights illuminated in the background. The girls are dressed in 1950s film noir outfits and most probably detective outfits in the film noir genre. It can be assumed that the outfit concept has been designed to match the name ‘Stalker’. If one notices minutely, it can be seen that NOIR is written in the background. The silhouettes of the 3 members look very elegant against the backlight. The monochrome color scheme and the play of light and shadow evoke an element of subtle mystery.

The second teaser photo is colored but the main color scheme here is blue. Though the picture is colored, the members’ faces are not quite as visible and thus retains the mystery element throughout the theme. The fashion does not belong to any particular decade since the members are wearing ruffles and corsets each belonging to different decades and pants which got famous after the 1960s. The consecutive teaser photos give the audience a glance at each of the members’ up-close photos. The girls are still wearing the 1950s Noir outfits combined with long earrings, which both men and women wear in today’s K-pop fashion. The women look bold, beautiful, and mysterious with hats, coats, waistcoats, and neckties combined with winged liner.

The group debuted on May 21, 2019, with the digital single “DMT”( Do ma Thang) a strong hip-hop track with a catchy dance beat. They have come with a fresh, unusual, and challenging perspective that is the “Strong Women Concept”. 3YE has stated their vision of the group previously: everyone to singing and dancing to their songs regardless of the gender identity of the person. The members said Shinhwa, a “first-generation”, six-member K-pop boy band(1998), their role model. The members even have talked about difficulties they faced earlier as trainees. The girls even spoke about multiple rejections faced before debuting in 3YE. Yet they are optimistic and hope to see a bright future with the group.  Their fandom is unofficially known as Eyes.

Apart from their originals, they have done a lot of covers of various songs as well as dance covers. The covers are not just restricted to American Pop but they have done Spanish Covers such as Con Calma, Indian Covers such as Dilbar, Thai Covers such as Drunk. This shows that 3YE has a global approach to music. Music has no barriers and language is not a barrier but just a facilitator.

One can find 3YE on Twitter, Instagram, and Youtube. They also have an official fan cafe site that has all the information, M/V links, and Photos related to 3YE. The fresh new visuals of the teaser photos have led to excitement and anticipation among the fans. The fans are very much excited and optimistically waiting for ‘Stalker’.  Like their other music, the fans are looking forward to more upbeat music to uplift their moods in the pandemic. 3YE has never failed to amaze with upbeat hip-hop tracks and keeps us waiting for more.

Halo: MCC Season 6 Is Coming This March & Fans Are Getting Uneasy