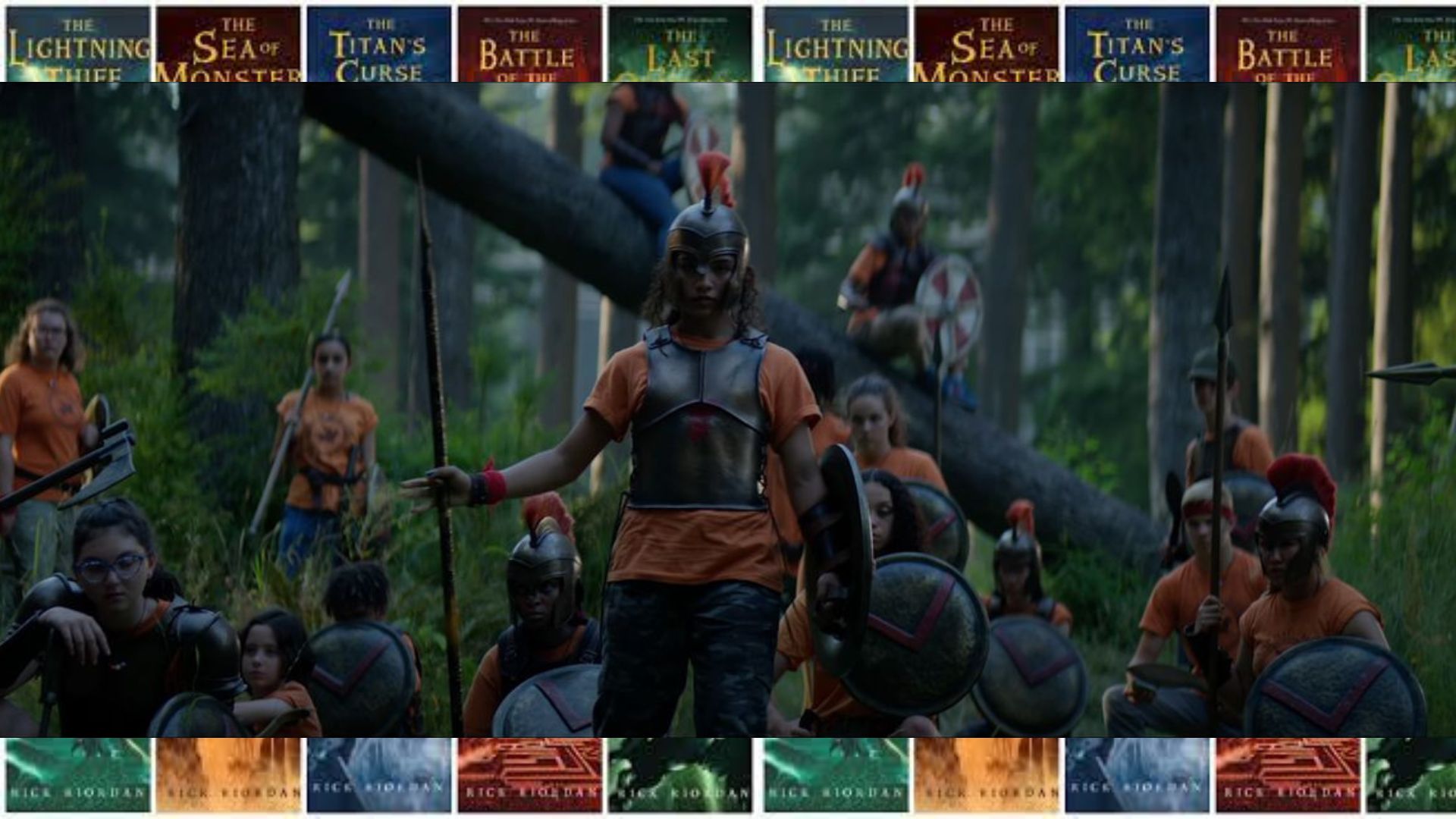 The whole bookish world has been excited since the Percy Jackson getting TV adaptation news was revealed. After months of waiting for something to hang on to, Percy Jackson and The Olympians, the upcoming American TV series for Disney+, debuted its first look during the Disney Plus presentation at Disney’s D23 2022 Expo on Saturday. After the series was first announced in May, its filming began in Vancouver this June. The short teaser opens with Percy’s narration, where he explains why being a demigod might be dangerous.

In the fifty-three seconds long video, Percy explains what it’s like being a demigod and ends his speech with a haunting line, “Don’t say I didn’t warn you”. If we were excited before, we are certainly thrilled and intrigued now.

The TV adaptation of Rick Riordan’s YA fantasy book series will be starring Walker Scobell as Percy Jackson, a young demigod, along with Leah Sava Jeffries as Annabeth Chase and Aryan Simhadri as Grover Underwood, Percy’s best friends. Other actors who will be recurring on the show include Virginia Kull as Sally [Percy’s mom], Glynn Turman as Chiron, Jason Mantzoukas as Dionysus, Meghan Mullally as Fury Alecto, Timm Sharp as Gabe [Percy’s stepfather], Dior Goodjohn, and Charlie Bushnell.

Percy Jackson & The Olympians is the first book in this fantasy book series, released on 28th June 2005. It follows Percy Jackson, a 12-year-old demigod who has just found his supernatural powers. Percy has always felt like an outsider; he is a smart and compassionate kid with a sharp sense of humor, but he also has a few problems, like dyslexia and ADHD.

When he’s sent to Camp Half-Blood, he learns about his father, Poseidon, God of the Sea. He also meets a satyr, Grover, and the daughter of Athena, Annabeth. Along with them, he sets out on an adventure when he gets accused of stealing Zeus’s master lightning bolt. Percy must trek across America to find it and restore order to Olympus before something big happens.

‌Percy Jackson Teaser: All You Need To Know About The TV Adaptation Of This Fantasy Book Series Cr: Otakukart

The Percy Jackson YA fantasy book series comprises Percy Jackson’s The Lightning Thief, The Sea of Monsters, The Titan’s Curse, The Battle of Labyrinth, and The Last Olympian. When the books were first adapted into movies, they ended up being a huge disappointment. Only two out of these five books got turned into films, and then they had to be stopped. However, readers are pretty excited about this TV adaptation and hopeful that this time, it will be done right.

There have been several rumors and opinions about the cast, but Riordan has approved the cast. Leah, the young Black girl, will be playing the role of Annabeth, who was described as a young white girl in the books. It was hurtful to see the backlash she was receiving to the point that the actress’ TikTok page had to be taken down. Following this, Rick approved that the cast was perfect and chosen for what they brought to the table. These actors will definitely bring life to the three characters that have shaped the childhood of several kids.

‌Percy Jackson Teaser: All You Need To Know About The TV Adaptation Of This Fantasy Book Series Cr: Otakukart

Riordan, who disliked the movie adaptations of his books, is actively involved in the TV adaptation this time. He will be co-writing the pilot of the series with Jon Steinberg. The adaptation will be directed by James Bobin. Riordan confirmed that the idea is to convert one book into one season. However, they are only green-lit for the first season as of now. Nevertheless, if the series goes well, he believes they will be getting approval for further seasons too. We are excited to see what the show comes up with, assuming we will be seeing only the first book in the first season.

Readers who grew up with Percy Jackson will get another chance to relive those moments with this adaptation. Percy Jackson and the Olympians will be airing somewhere around 2023 or early 2024 on Disney+. The project is being kept quite a secret, giving only bits of news here and there, so we will have to be patient until the series releases.

Also Read: Disney’s Expo: Everything That You Should Know About D23 2022