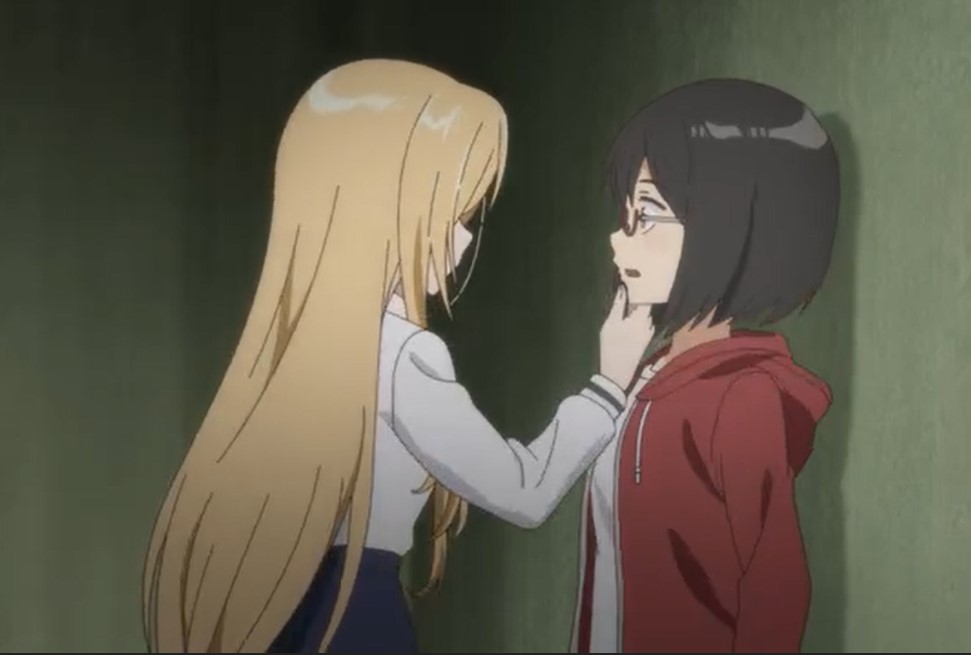 Nishina corners Sorao like she wants to kiss her, and Sorao got scared, thinking that Nishina is getting bad ideas. Nishina told Sorao to stay like that, and he touches her chin, which makes Sorao start trembling. Nishin said, so beautiful and Sorao asks Nishina that what’s got into her.  Nishina took her cellphone and took a picture, and said Sorao’s right eye is so blue.

She gave her a cellphone to check it on the picture, and she is relieved that what was happening is not what she was thinking. After Sorao looks at the picture, Nishina shows her glowing hand, and you can see the other side of you is looking at it from the front. Sorao said it is translucent, and she asks where dis Nishina get that. Nishina replies that she did not do it on purpose, and it happened earlier when they were hunting wiggle-waggle.

Otherside Picnic Episode 3 will be released on Monday, 18 January 2021, at 11:30 PM JST.  Stream or watch the anime officially on AnimeLab and Funimation or visit its official website at othersidepicnic.com. You can check other development here on this link: Anime. Let’s move to the latest updates below.

Earlier the two went to the other side and defeated the wiggle-waggle monsters. The two use salt and Sorao ideas to defeat them, but Nishin’s idea is to go there since they will make a fortune. Sorao realizes that they encountered the monster 3 days ago. She also realizes that the wiggle-waggle urban legend is well known on the net. They are said to be creatures that drive you mad just by looking at them.

Sarao said she belive her right eye had turned blue because she looks at one of the waggle-wiggle for too long.  That has also make Nishina’s hand turn translucent when she tried to remove the saliva of wiggle-waggle on Sorao’s forehead. Nishin suggests that they can have an expert look at her hand.  She said that she knows someone who is a researcher who specializes in the other side.

Nishin said that the researcher wants the mirror cubes that the wiggle-waggles drop. Sorao can’t believe that they have to go again for the third time to that dangerous world known as the other side. Later the two board on a train, and Saroa asks if Nishina is not ripping off that researcher. Nishina replies that she is just sending mirror cubes to the other side. The researcher is paying tons of money, and that is called business.

Nishin said maybe she is the one getting ripped off, and Saroa just looked down, thinking the opposite. After a long trip, the two arrive at the Otherside, and Sorao realizes that they are in front of the building where the kids say it is haunted. Nishina ignores what Sorai is saying, and hs opens the gate. They both enter inside with Nishina calling if there is someone. Nishina opens the house door, and they get inside.

The met with the researcher, who asks how much did she pay Sorao to come with her. Nishina replies that Sorao is free, and she tells Sorao that she is the one she was talking about. Her name is Kozakura, who conducts research related to cognitive science and thinks that happens on the Otherside. Kozakura asked Nishina why is she revealing the truth about her. Since Saro is a stranger and Nishina replies that she just said Kozakura was an expert.

They both sit down, and Nishina shows Kozakura her hand and tells her to look at Sorao’s eye. Kozakura looked at Nishina’s hand and Sorao’s eye and said that it is a real eye. She then asks what has happened, and Sarao narrates the story of wiggle-waggle urban legend. She explained everything in detail and said they ended like that after defeating one of the wiggle-waggle. Kozakura is surprised that the two had a close encounter of the fourth kind.

Nishin asks what the fourth kind is, and Kozakura reveals that contact events with UFOs are classified as close encounters of the first, second, and third kind in ufology. She said she had applied a similar scale to contact events with the Otherside. The fourth kind has a physical impact on the body—the closer the contact with the Otherside, the greater the danger. The Otherside enthralls some contacts, it becomes an addiction, and there never return. Nishina comments that it is just like Satsuki, and she reveals the incident that happened to Satsuki.

That’s how we conclude this week’s post with all of the above updates. Let’s meet again next time when a new episode is released. If you miss the previous episode, you can try it here: Otherside Picnic Episode 2.