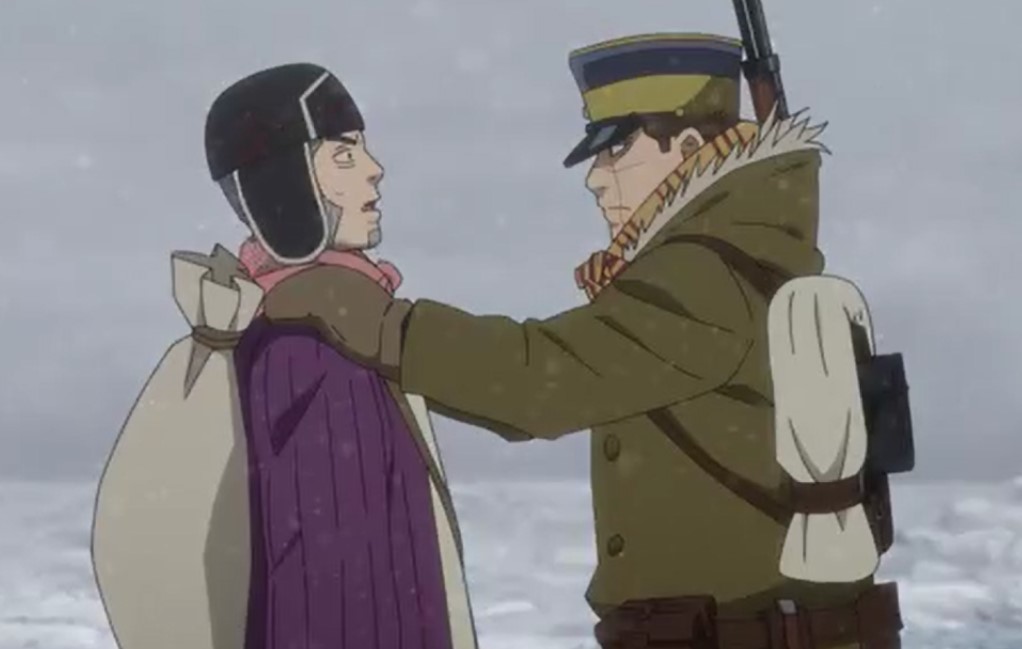 After helping the mighty old hag  Sofia escape from Ako prison, Shiraishi got separated from others, and his life was in danger alone. Shiraishi Yoshitake was about to fall from the mountain ice cap, and Sugimoto saves his life. He grabs him to safety, and he is glad that they finally meet again when they want to celebrate their reunion. Sugimoto asks him where is Asripa, and he replies that he is with her just up ahead.

Shiraishi reveals that she is also with Kiro and Ogata, who told Asripa that Sugimoto says. Sugimoto realizes that Ogata is the guy who shot him the last time they met. He also reveals that even Asripa’s father nearly took his life, but he was right next to him. Sugimoto reveals that those two are not good, and they have to get Asripa back. Meanwhile, Asripa is with Ogata and Kiro. On the other side, she is missing all her friends from Sugimoto’s side.

Golden Kamuy Season 3 Episode 36 will be released on Monday, 21 December 2020, at 11:00 PM JST. The spoilers of Golden Kamuya Season 3 next episode are not available. Note that every Monday new episode of this Anime will be released. You can enjoy watching this Anime on Crunchyroll. Let’s look at the following.

On the other side, they notice that it is windy, and they started building a shelter. Ogata left with Asripa to fetch more firewoods. Sofia is with Kironko building a shelter while the two collect woods. Asirpa points at the woods showing Ogata, and she is surprised by his reaction. He said that she has just remembered something significant and ask her if it was the key to help her solve the tattoo code.

Asirpa shows him a weird look, and he realizes that she won’t spill the bean. He told her that he wants a reward for all the fighting and risking his life, just like Shiraishi and Sugimoto. Asripa realized that he outsmarts her by luring her to collect fire woods with him. He explains to Asripa how much he needs to get the gold to change his life. He told her that this could lead to a new war, and if she wants to stop the war, she can tell him how to break the code, and she will be free.

He tries all the way to manipulate her so that he can get the code. Meanwhile, Hajima and others are following Sugimoto’s footprints, and he saw a lady nearby freezing. He wanted to leave her and continue the journey, but he can let a woman die in front of him. He asks her in Russian if she is Svetlana, and she asks how he knows her. Hajima reveals that her parents saved his life at the lighthouse when he was about to die.

Hajima reveals that her parents said a Russian soldier kidnapped her, and they ask him to save her. He asks her what she is doing out in the cold, and she replies that she was willing to follow anyone. She reveals that she wanted to escape from her boring life on that Island. Hajima told her that she could use the sled to return home, but she insists that she want to see St. Petersburg city.

Hajime said that she could do that after letting her parents know that she is alive. Svetlana said that she is ashamed to show in front of them since he and that man became robbers and got caught. Back to Ogata, he told  Asripa to let Kiro and Sofia handle the Ainu, and she must tell him. Asripa asks Ogata why he is asking her about the code when Kiro and Nispa are not around. Suddenly, Kiro’s voice is heard calling Asripa, and they both hear the sound of a gunshot nearby.

It is Hajima’s man fighting with a thief that wants to take their goods. Ogata uses his binocular, and he saw Sugimoto; he got scared and wanted to take him at a range. Asripa is not aware that he wants to kill the immortal Sugimoto. She asks if he is aiming at the persues, but he can fire since the snow is obstructing his view. Meanwhile, Hajima’s man manages to slash the thief into pieces while Ogata grabs Asripa and runs away with her.

Ogata reveals the truth about the day Sugimoto was shot and she asks why he is telling her now. Ogata said it is because she has remembered the way to break the code. He reveals that he doesn’t care what happens he just wants to get the gold and he knows that Kiro might kill everyone after getting the gold. On the other side, Kiro fought with someone who looks like a member of Sugimoto’s crew.

He manages to take him down but he got stabbed in his belly with a wild animal bone. While Ogata tries to use Sugimoto’s name for Asripa to tell the code, he said that he is on the same boat as Sugimoto.  Asirpa was falling for his story but he fails in narrating it. Asripa realizes that he is lying and refuse to tell the code he then started to drag her away. Asripa manages to slip away and gets her bow then points it at Ogata.

Ogata reveals that he is the one that killed Asripa’s father and Asripa loose the courage to shoot him Ogata points the gun at her and Sugimot shows up behind Ogata. He shouts that Ogata! and scares Asripa who shoots the arrow straightOgata’s right gate.

Ogata fell down with a smile and Sugimoto jumps on top of him using his knife and took off the arrow out of his eye. He kisses the hole sucking the blood out of it and bandages it. He said that he won’t let Ogata die in his hands and make Asripa a murderer. after healing Ogata Asripa jumps at Sugimoto saying she knew that he is alive. Sugimoto said that he told her that he is Immortal

More updates of this anime will be available on Funimation since this is the final episode of season 3. For today that what episode 36 has managed to give us those updates above.

Best Anime For Kids – Anime Suitable for Children, Must Watch!

Anime Similar To Hunter X Hunter that you Will Love Watching!