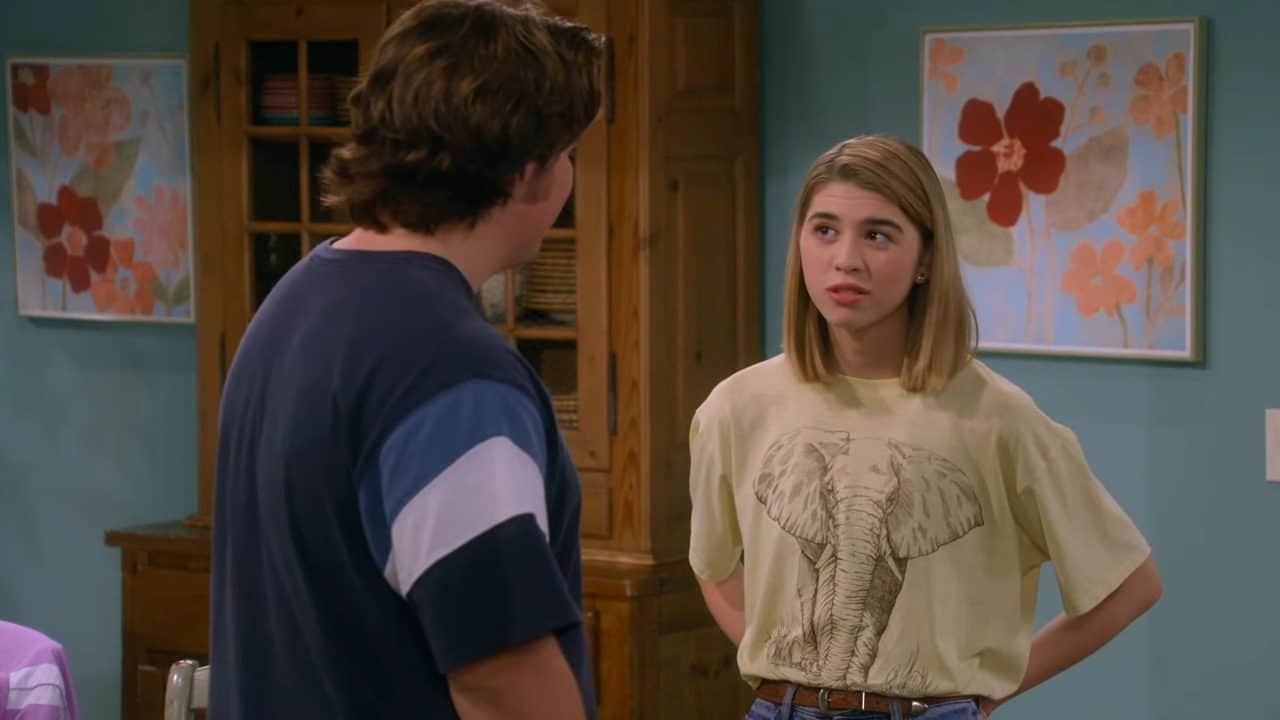 That 90s Show was recently released on Netflix, and whilst it was set in the universe of That 70s Show. This new take said 20 years later, it contained cameos, familiarity, and a new set of characters that were related to the original bunch.

This show follows Leia on her summer away from Chicago while staying with her grandparents, Red and Kitty. We saw her be introduced to a ton of new friends and adopt a new site that she never quite thought was inside of her. So with that, I thought I’d recap, break down, do a That 90s Show Ending Explained and also explain all that there was to take away from this first season of the show.

This show started off with appearances from characters such as Red, Kitty, Eric, Donna, Michael, and Jackie, but by the end of it, it had grown legs and was able to forge its own identity and not rely on the cameos. 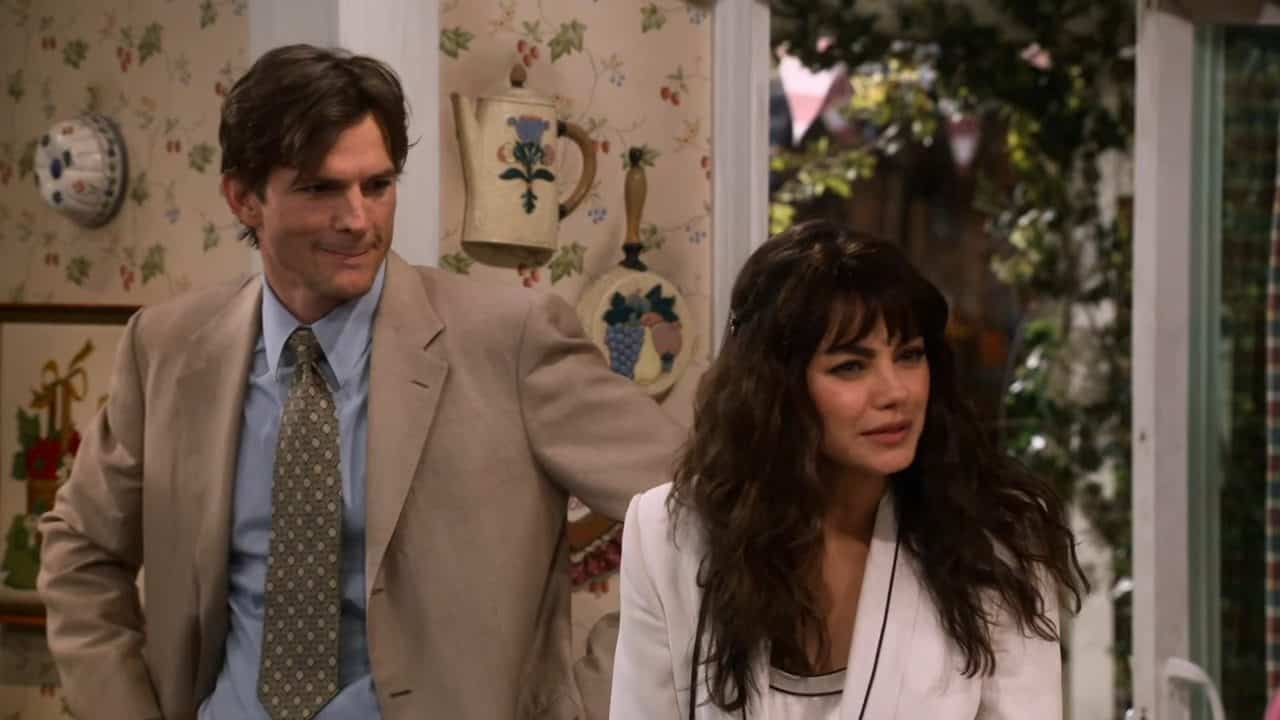 I would say that it took a while to get into it due to the fact that even though this show was set in the 90s, it’s very much structured like a 90 sitcom. And the way that the jokes were delivered, the set was laid out, and the slightly over-the-top acting. But by the end of it, it worked in its own weird way.

As we embarked on the end of the show, we saw all of the main characters going through a lot throughout the summer. We had the group, which consisted of Leia, Gwen, Jay, Nate, Nick, and Ozzie, who spent the entirety of the summer getting up to antics as a group and living out how summers are spent as a team in the states. Partying, hanging out in the basement, and just being together as one. Almost like how we often see it being depicted in 80s movies.

Leia’s Relationship With Hay And Nate

But the real story was centered around Leia and understanding her own identity a bit more and transitioning from a child to more of a young adult. Experiencing things that she never had in her hometown due to the fact that she wasn’t a popular kid at school. She never really had that amount of friends before, and we saw her living a different life to the one that she spoke of when she referred to Chicago.

Leia and Jay’s love arc was something that ran throughout the entirety of the show, from the very first episode right up until the last one. However, with Leia going back to Chicago, it was pointed out that it was going to be tough to handle the long-distance relationship. And remember, this was in a world before FaceTime and when mobile phones were like what they are now. So it would have been pretty difficult. 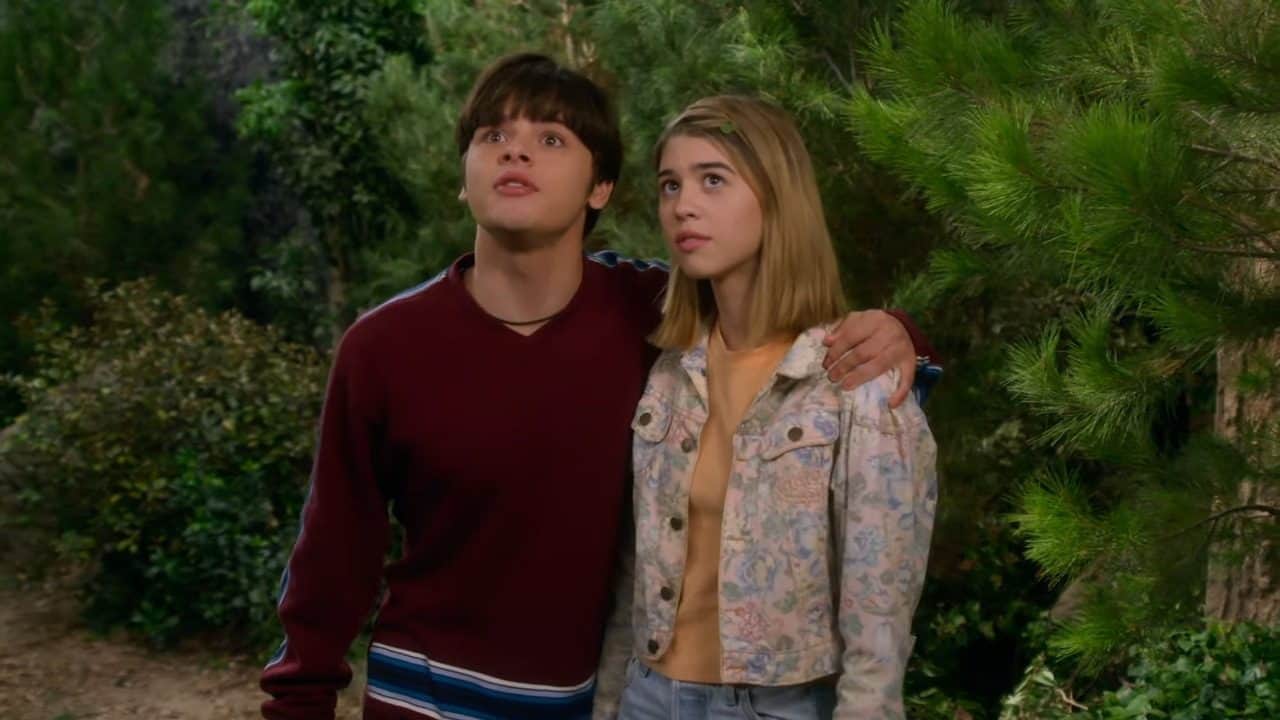 But the real problem was that we saw layers showing intimate moments with her best friend Gwen’s brother, Nate. Something that was a little out of the blue, but I feel as if you were, we can understand why it happened.

Nate felt like he was a bit of a burden in his own relationship and with his girlfriend, Nick, Speaking of their future and going off to college. It was never really a part of it. So just like how Jay broke up with Leia, he could almost relate to how she was feeling because he felt like he knew what was coming for him.

Hence why, when they were confiding in each other, they almost shared a kiss. Which made the ending of the season a bit more difficult for Leia and Jay. As he actually wanted to give it a go, but she stated that she was confused, which it seemed as though she most definitely was. Personally, I don’t think they’d be a good match, as their personalities are very different, so that’s something I feel we’ll just have to wait and see.

Leia was a completely different character by the end of the season, and it was actually mentioned by Gwen when they went back to the destination where we saw them first come out and the first episode of the show. Gwen stated how when they first got there, she never kissed anybody, never had a beer, never stopped talking about debate club, and that now she was an agent of chaos.

So the events that we saw unfolding throughout the entirety of the That 90s Show Season 1 did change her as a person. And while it didn’t feel like an epic summer that was filled with action and adventure, it was a summer that was relatively realistic and just fun. Leia got to experience the two different sides of having a boyfriend and its complications. That’s what it felt like the main storyline was, anyway.

Leia was besotted with somebody and was trying to navigate playing it cool, then actually being cool in a relationship, and then how to handle knowing that she was not going to see him for a long while.

But with season two maybe being on the cards, I think we could see everybody potentially find out about the feelings that Leia may actually have for Nate instead and the divide that it could cause in the friendship group. Forcing Nikki and Jay to most likely want to separate from the group. 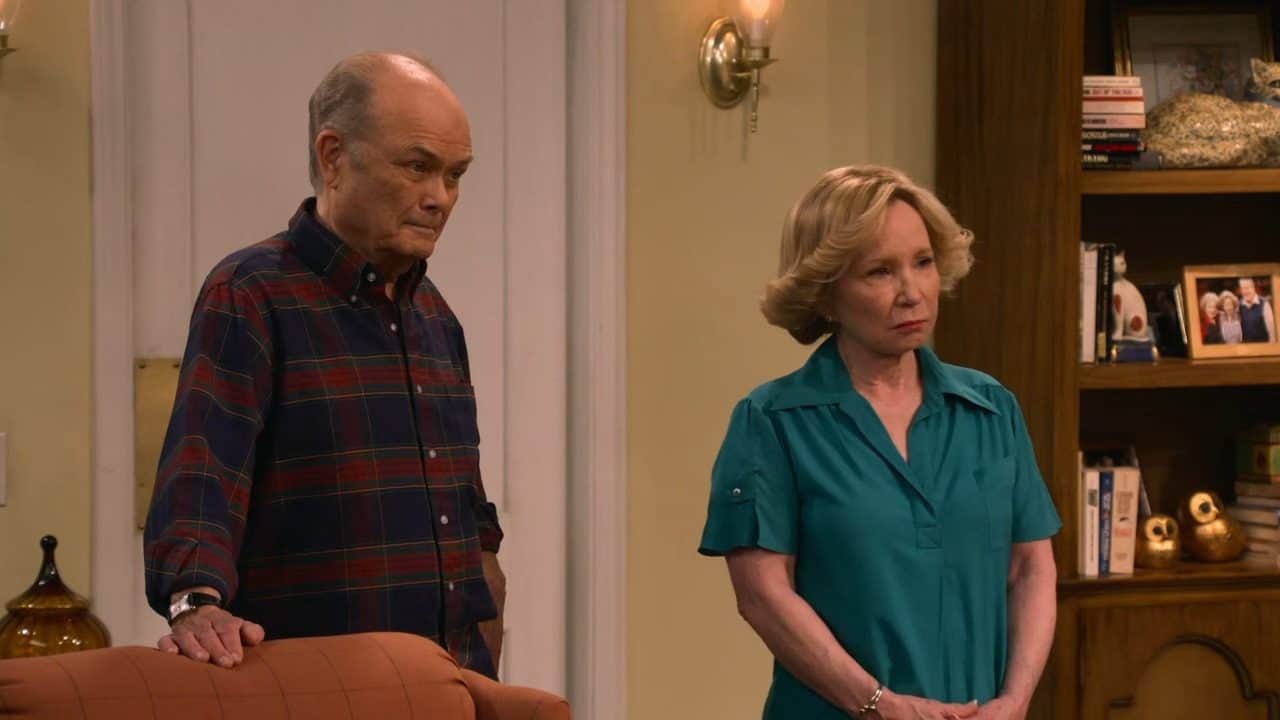 Within the main arc of the show, there were some other stories that we saw unfolding with the other characters. Such as Nick wanting to focus on her studies and go off to college, which could set up a story later on down the line if she decides to break up with Nate as he seems to be on a different path. And we also had Ozzie coming out to Kitty because he felt like he wanted her to know.

So there were some slightly heavier stories embedded throughout the comedy. Outside of the main arc of the show, which was focused on Leia and her friends, we had the stories that were focused on Kitty and Red. They had been retired for a while, and we saw that whilst having an empty house was perfect for Red, as he was an individual that didn’t really enjoy being around people, Kitty felt the complete opposite.

Everything that she did in the season was because she felt the absence of her son and her family. Hence why, we saw her overprotective nature at the start of the season when she was sniffing her son’s hair because she was quite lonely. So it was actually quite sad.

Everything that she did in the season was to keep the house full, have people in it, and, like she said, “Let it feel like there’s some life in there.” We saw that due to her enjoying being around Leia and her friends throughout the summer, she decided to go back to work as the school nurse. So if there is a season two of the show, there’s nothing to say that we couldn’t see a little bit of that side of her life making an appearance.

I thought this That 90s Show was OK. It’s not the best sitcom I’ve ever seen, nor do I think it will go on to be. But I feel it was an OK first season. As I mentioned, it definitely took some time to get into the show, as I feel like I’ve not seen anything like that in a while. 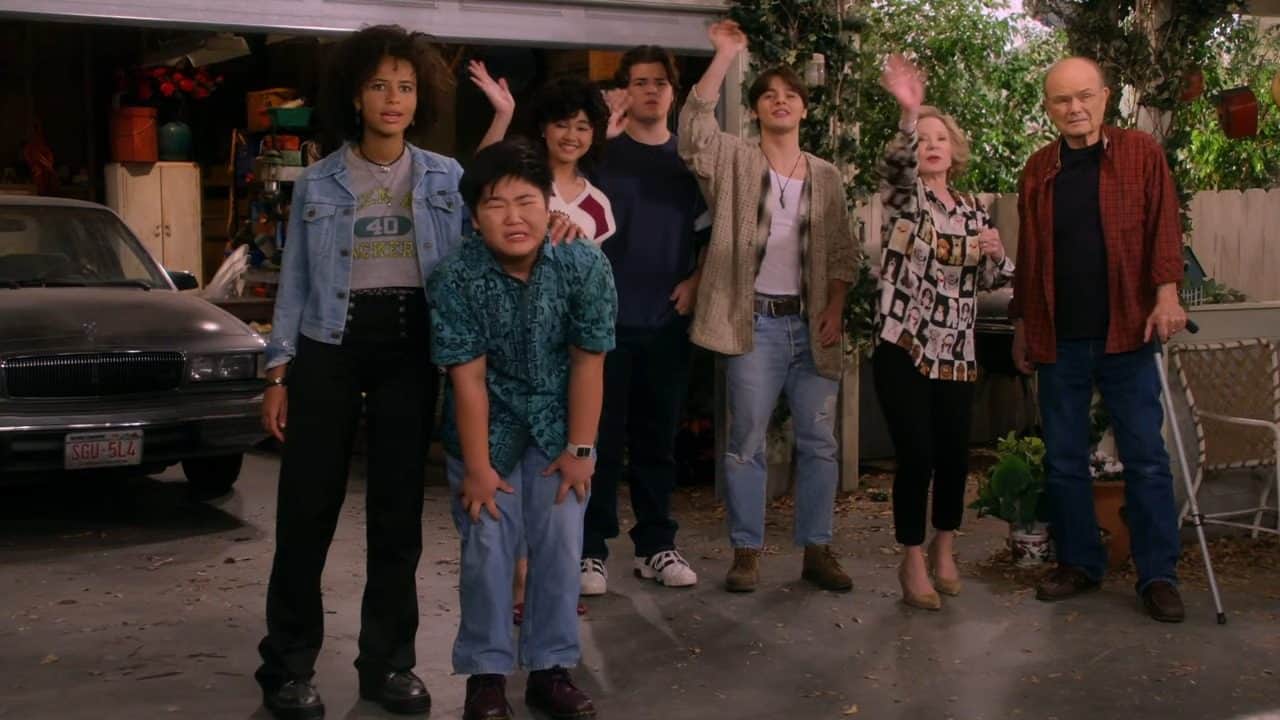 The laugh tracks and over-the-top comedy with cheesy jokes are something that you can get away with in the 90s and the early 2000s. But bringing it into a decade 30 years later is something that I think could be the downfall of the show. Because it’s not new, it’s dated, and it’s been done several times before, all throughout the 80s and the 90s. It’s quite hard to place the TV show.

I don’t know whether it’s a show that’s supposed to resonate with teens today, if it’s supposed to draw on nostalgia from people that watched that 70s Show, or if it’s just something for all. I think that’s one thing that it would need to work on if it does eventually come back.

With that being said, I thought the stories were relatively OK. They were nothing special, but they were engaging enough. The performances were exactly what they needed to be. At times the acting was questionable, but I think that’s the nature of the style of the show, over the top. So I felt a little more settled the more that I watched it.

I thought Kitty and Red most probably delivered the strongest performances in the show, and their chemistry was something that was perfect. You could tell that they’d worked together for a long time in the past because they just clicked. Red’s temper and fearful nature were something as well that was a good contrast to the easy, plain, sailing nature of the show.

I feel they could definitely make more seasons of it, focusing on every summer. It’s quite an easy formula to repeat. I suppose the real question will be if there’s any appetite for it. Personally, I could live without it, but I wouldn’t be opposed to seeing what another season would bring. I guess we’ll just have to see. So this was That 90s Show Ending Explained.