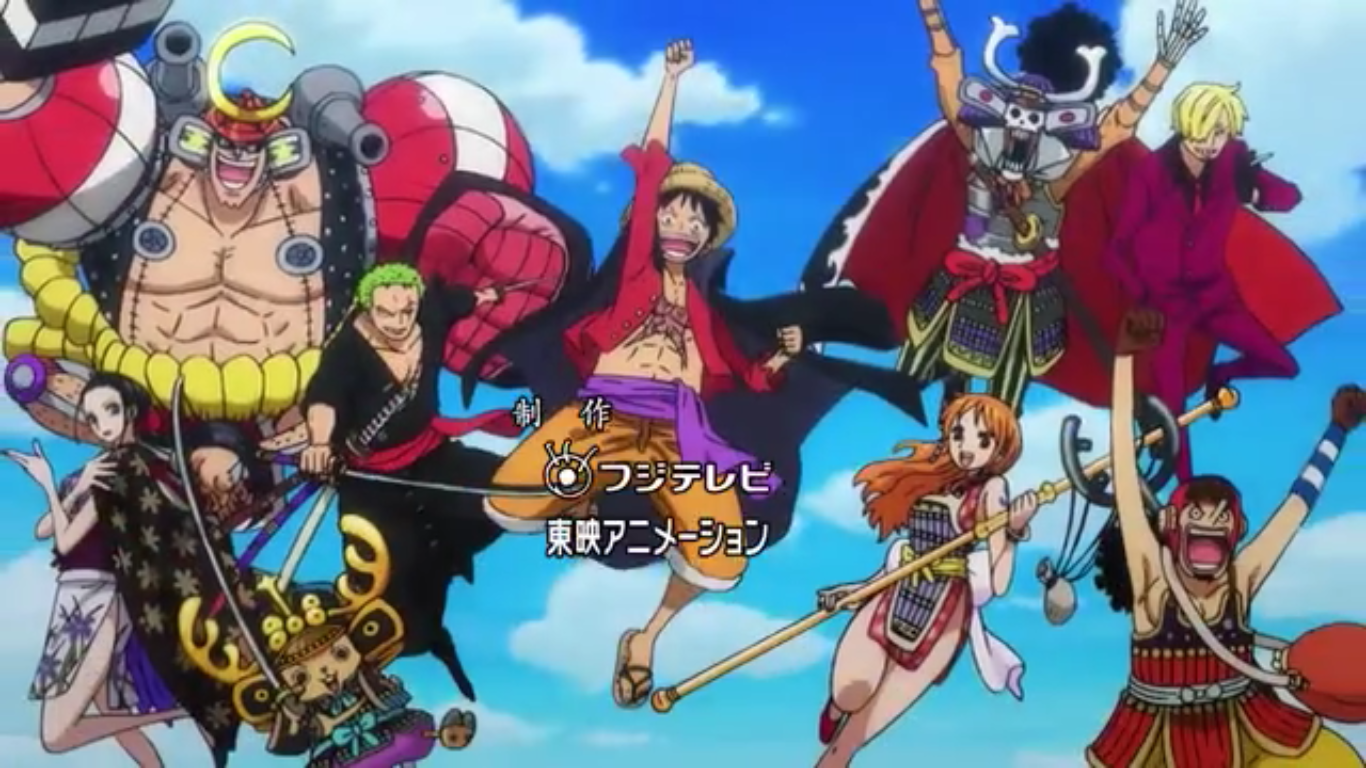 One Piece Chapter 1003 spoilers are out early this week. The spoilers give a partial summary of the next chapter highlighting significant events that One Piece Chapter 1003 will cover. More importantly, significant events came to light in the ongoing fight. The manga has been focusing on the battle at the top of the mansion for some time now, and soon, it will transition into other fights. We all know that the battle at the top of Onigashima is the biggest one.

This means that it is likely to be the one to conclude last. The manga will probably explore other fights one by one first while giving us a little glimpse at the big battle. When every other fight has ended, then the manga will entirely focus on Kaidou and Big Mom’s fight against the new generations.

Soon we will take a look at the spoilers that have hinted at exciting developments in the manga’s upcoming chapter. The full spoilers are out and show a detailed chapter write up and the official chapter will release on Sunday. The manga has entered the final phase of the Wano arc. So Wano’s arc act three will likely be the last arc in the Beast Pirates territory.

The chapter is titled “The Night on the Board.”

The chapter starts with Luffy punching Kaoidou with gear four enhanced battling. Kaidou spits blood from his mount and Bib Mom is shocked. Luffy throws one powerful punch at Kaidou and falls to the ground.

Airt comes out to  Luffy’s bound and Kid is shocked to thinking that Luffy might have been attacked somehow. Law explains to him that it is just a side effect of gear four and Luffy won’t be able to use haki for 10 minutes.

Kidd commented that it is a power that comes with risk and noticed that the attacks seem to work.

Big Mom attacks Luffy with the flaming version of “Hahaba” (mother destruction sword) but Zoro saves him and jumps out of the way. Kid and Killer go to attack Kaidou who is still on the ground. Law attack Big Mom with countershock.

Kaidou rises up from the ground and created a tornado that blows both Luffy and Zoro away and then chomps on Luffy.

Zoro tells Kaidou not to eat his captain. He then uses “Kokujou Oo Tatsu Maki” (the same attack he used on Fishman Island) and created a tornado to counter Kaidou’s attack. One of Zoro’s slashed makes it through Kaidou’s scales and he bleeds. Kaidou notices that Zoro’s sword has a strange Haki because it is Oden’s sword.

Kaido asks Zoro if he wanted to use a tornado against him and then attacked with “Tatsumaki Kaifuu” (Twister Destructive Wind) and created huge blades in all directions. Zoro carries Luffy and runs while Kid and Killer deflect the blades and Law uses his powers to warp to safety.

Cut to the inside of Onigashima Castle, the battle at the top of the dome creates a huge tremor, sending rubbles raining on the battles below. Orochi’s head is still lying on the ground.

Cut to the two CP0s who are sitting in one of the rooms in the castle. A woman with an eye-marked paper on her face appears playing music for them. The two CP0 are playing “GO” a Japanese game on aboard. White pieces represent samurai and black pieces represent Kaidou’s army. The samurai has 5 4oo men and lost 400. Kidou has 30 000 and lost 3 000. Each piece is equal to 1 000 men, so the samurai has 5 pieces left and Kaidou still has 27 pieces.

The head CP0 complains about how their trade partner (Orochi) is dead and that the banquet has turned into a war. They pointed that after Doflamingo’s fall, the clash between Kaidou and the worst generation is inevitable. He also says that if it turns out that two o f the four Yonkou fall together in this fight. The future of the world will be completely unpredictable.

They don’t believe that the samurai can win since the battle wont end even if Kaido and Big Mom are both defeated. They will also have to deal with the executives (Ookanban). If they are not defeated, the samurai forces can be easily annihilated.

As the CP0 narrates, we see Franky and Sasaki fighting. Sanjin looks panicked with blood on his head and Nami, Ussop and Tama doing something together. Ulti appears running and Jinbe fighting and Yamato preparing to fight while protecting Momonosuke and Shinobu. The head of the CP0 says that the pirates should just crush each other as much as possible.

Cut back to the rood in Onigashima. Before Luffy Law,and Kidd, Kaidou finally transforms into his human-beast form (hybrid form). His silhouette standing in the smoke with Big Mom next to him. Kaidou’s hybrid form appears to be as twice as big as Big Mom.

Kaidou tells Big Mom tat this is getting pretty fun and laghed (Worororo!!)

Big Mom replies that she is feeling exactly the same thing.

The new chapters will continue releasing, and there is NO BREAK NEXT WEEK.

We have managed to get hold of these early spoilers thanks to the One Piece subreddit.

It looks like the manga will focus on the fight in the dome for another chapter. However, this would not last long as things are getting worse on top of the dome. The manga will likely wait for a big event to happen on the rooftop before switching to the fights at the lower levels.

One Piece Chapter 1003 Discussion and Predictions 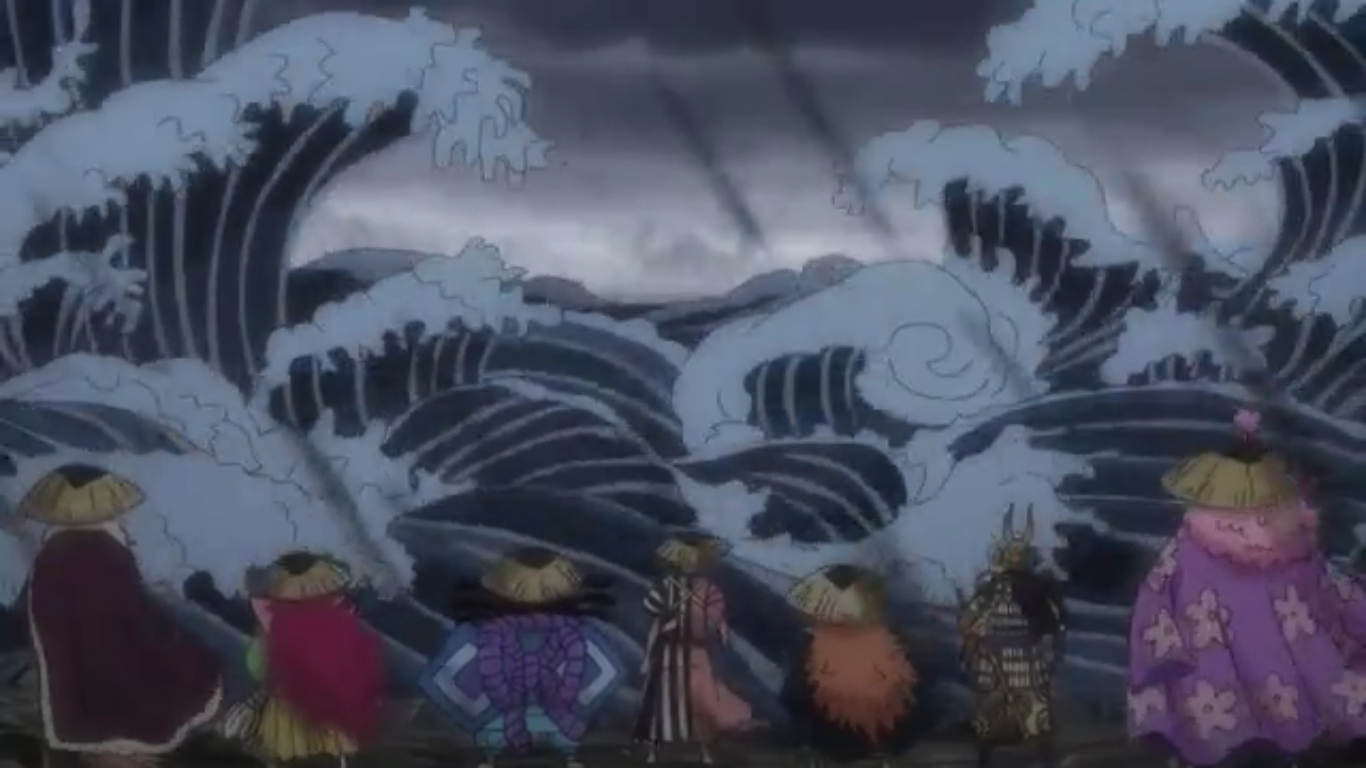 Things have already started getting bad, Luffy has lost Haki for the next 10 minutes and is now a sitting duck in the fight against the Yonko. Big Mom did not waste any time and started attacking him right away, but thanks to Zoro, who managed to save him. 10 Minutes is a very long time fighting like this one. And just like we saw in Dressrossa, Luffy will have to sit out until he recovers.

So now he appears as the weakness in the new generation’s link. So some of them will have to fight to defend him. Well, Law will likely teleport him away until he recovers. So that will be the best solution, then we might see what he will be up to for the next ten minutes. Law will probably teleport him somewhere safe as he is now enemies of all of the Beast Pirates. The best place would be where Yamato is, which is a good hiding place. Momonosuke is already there, so the three of them can have an exciting conversation in the meantime.