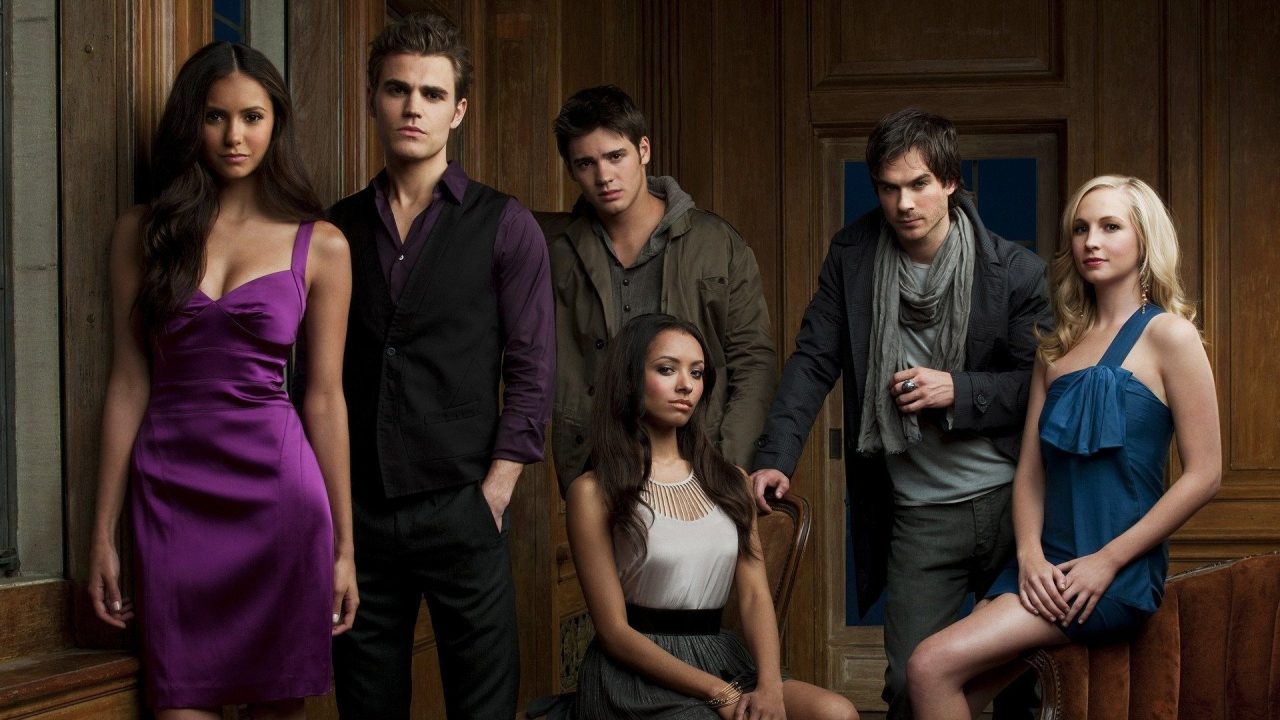 Dear diary, can you believe that it’s been more than ten years since the first episode of the vampire diaries aired? The first episode aired on 10 September 2009 and this show won hearts. It is the longest-running vampire-related show with 8 seasons and 171 episodes. It is based on the novels written by L.J. Smith under the same name. Lead stars of the show are Nina Dobrev, Paul Wesley, Ian Somerhalder, Candice King, Katerina Graham, Zach Roerig, Michael Trevino, and Matthew Davis. Kevin Williamson and Julie Plec are the writers, and it aired on The CW for its entire eight-season run.

Even after ten years from the premiere of the first episode of the vampire diaries, It is still in the top ten trending series on OTT platforms like Netflix. With its amazing cast and relatable content, the vampire diaries have increased its fan base even more in the lockdown due to the global pandemic. Even though this show is a teenage drama, even adults can relate to it on many levels making it appropriate for the majority of the audience on OTT platforms. 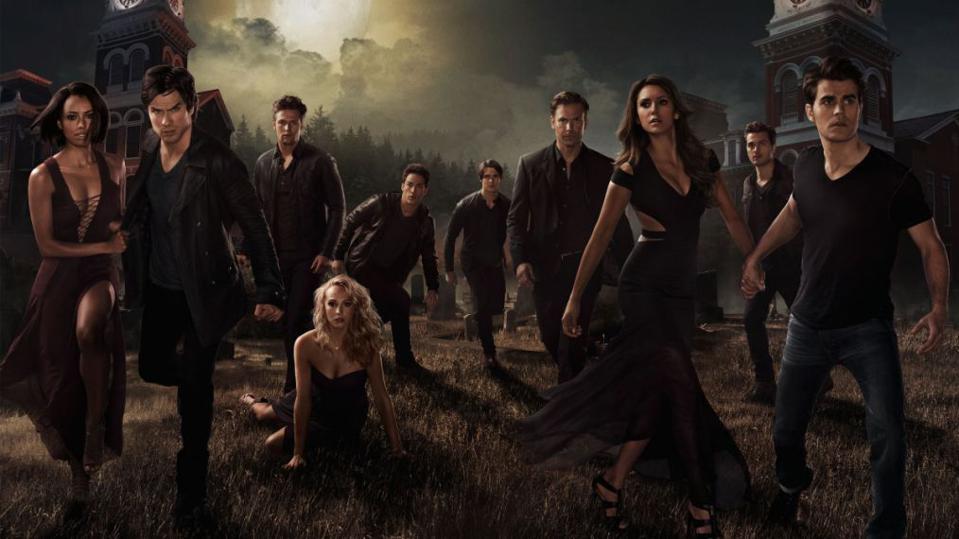 The Vampire Diaries is a show that is set up in Mystic Falls, a small town with deep family ties between the residents and supernatural history. The story revolves around Elena Gilbert who was one of the most popular girls in her school. The show opens with Elena writing in her diary about her feelings after her parents have died in a car crash which she was a part of but she survived. Elena is living with her aunt Jenna and brother Jeremy who is a troubled teen and is involved in substance use and abuse.  Elena’s world is turned upside down, after her interaction with the new guy at school who has a mysterious vibe to him, 17-year-old Stefan Salvatore and his 25-year-old brother Damon Salvatore. The Salvatore brothers aren’t normal kids like Elena and her friends, they are vampires, and their return to Mystic Falls opens doors of the supernatural part of the town which Elena and her friends were unaware of.

Elena discovers that she bears a striking resemblance to the girl both of the Salvatore brothers loved and died trying to save in 1864 – Katherine Pierce. The brothers try to get close to Elena to find out the reason for her resemblance with Katherine and in the process, both of them end up falling in love with her.

Elena’s two best friends, Bonnie Bennett and Caroline Forbes, along with Elena’s brother Jeremy, her ex-boyfriend Matt Donovan, and the mayor’s son Tyler Lockwood are also focused on during the show. Most of these teens are decedents of the founding families of Mystic Falls, a heritage that is kept alive through a secret council whose goal is to get rid of all the supernatural forces in the town. However, their life changes when they figure out that vampires are not the only supernatural creatures in town, in fact, some of them are themselves a part of a supernatural group that they had no idea existed anywhere except in mythologies. 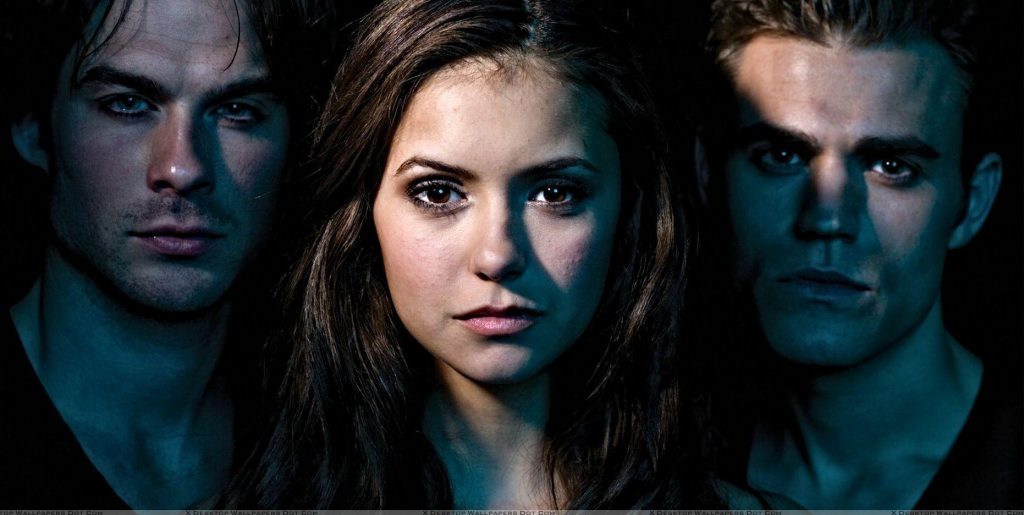 Elena Gilbert along with the Salvatore Brothers

Why should you watch it?

This is one of the most well thought of and fun show which was aired with a rather silly name when the Twilight craze was on peak. It definitely deserves a lot of credits for amazing writing and an incredible cast. Every episode is important, missing any episode can lead to missing a major plot twist because what initially seems like a tiny insignificant detail turns into an important story an episode or two later. Each time a storyline is introduced, it leads effortlessly to another. Each story is focused on for enough time to keep the viewer interested. The show also portrays strong female characters. Women aren’t depicted as princesses waiting for their knight in shining armor to come and rescue them. They are very well capable of rescuing themselves and even the guys when they’re in trouble. It also has the most shocking and interesting season finales.

Personal views on the series

While I obviously have an emotional connection with the series, the main reason why I love the series is that even though the characters are supernatural one can still relate to them. The supernatural abilities and stories are metaphorically linked to our real-life issues. Stefan’s addiction to blood is symbolic of alcoholism and addictions of other kinds. The ability of vampires to turn off their emotions and human empathy depicts depression. Heightened emotions after a person are transformed into a vampire can be related to anxiety. I am on Team Stefan because I love his character, how he is always there to save the day, and of course his irresistible hero hair. This show reminds me of the time when I was growing up and finding myself.

The Vampire Diaries is a must-watch series for everyone. Even those who are not interested in stories focusing on supernatural creatures will be hooked to their screens right from the start. It is a perfect blend of fiction, drama, and romance. It will keep you coming back for more. You will live, learn, cry, laugh and grow with the characters and end up falling in love with them.