After Jordi ended things with her, Angie was already emotionally exhausted and stormed out. Bette and Tina give her privacy so that she can process her feelings. However, they must talk about how their relationship is right now so they can decide what to tell Angie.

They chose to rekindle their romance and have intimate moments for the first time since their breakup years ago. Dani snidely asks Gigi if Nat has given her approval to move in with her as they prepare to organize an art display, and she grills Gigi once again about living together.

As a co-parent, Nat does have a right to know who her children will be spending quality time with, according to Gigi, who notes that dating someone who has children involves putting the children first.
Gigi believes Dani is acting childish, but Dani complains about being addressed like one.

Dani had had enough when Gigi angrily named her “Daniela” in a stern voice. At that unfortunate time, Nat calls, and Dani hangs up. Tess brings up Shane’s purchase of the tavern once more. Half-jokingly but slightly suspiciously, Shane queries whether Tess is controlling her. It’s obvious that Shane is uneasy and beginning to feel restricted by their domestic life. When Tess’ real estate agent calls, she discusses inspections and other specifics. The idea of committing to owning the bar, or perhaps simply commitment in general, gives Shane a noticeably uneasy face.

Finley tries to entice Maribel, Micah, and Sophie into a poker night. Sophie is willing to try it but believes Maribel won’t be since she despises Finely. After overhearing the dialogue, Maribel reluctantly decides to join, but only to please Sophie.

The game night was unsuccessful. All of Finley’s statements are incorrect. Then, there is an evident conflict between Maribel and Micah over having a child; Micah claims he never consented to have a child. Both couples return to give Micah and Mirabel time to resolve their difficulties.

Finley is establishing sober living and undoing the harm she caused while she wasn’t sober, which is more difficult than anticipated. Tina and Bette inform Alice they are still together and at Dana’s before the art presentation and describe Angie’s response. 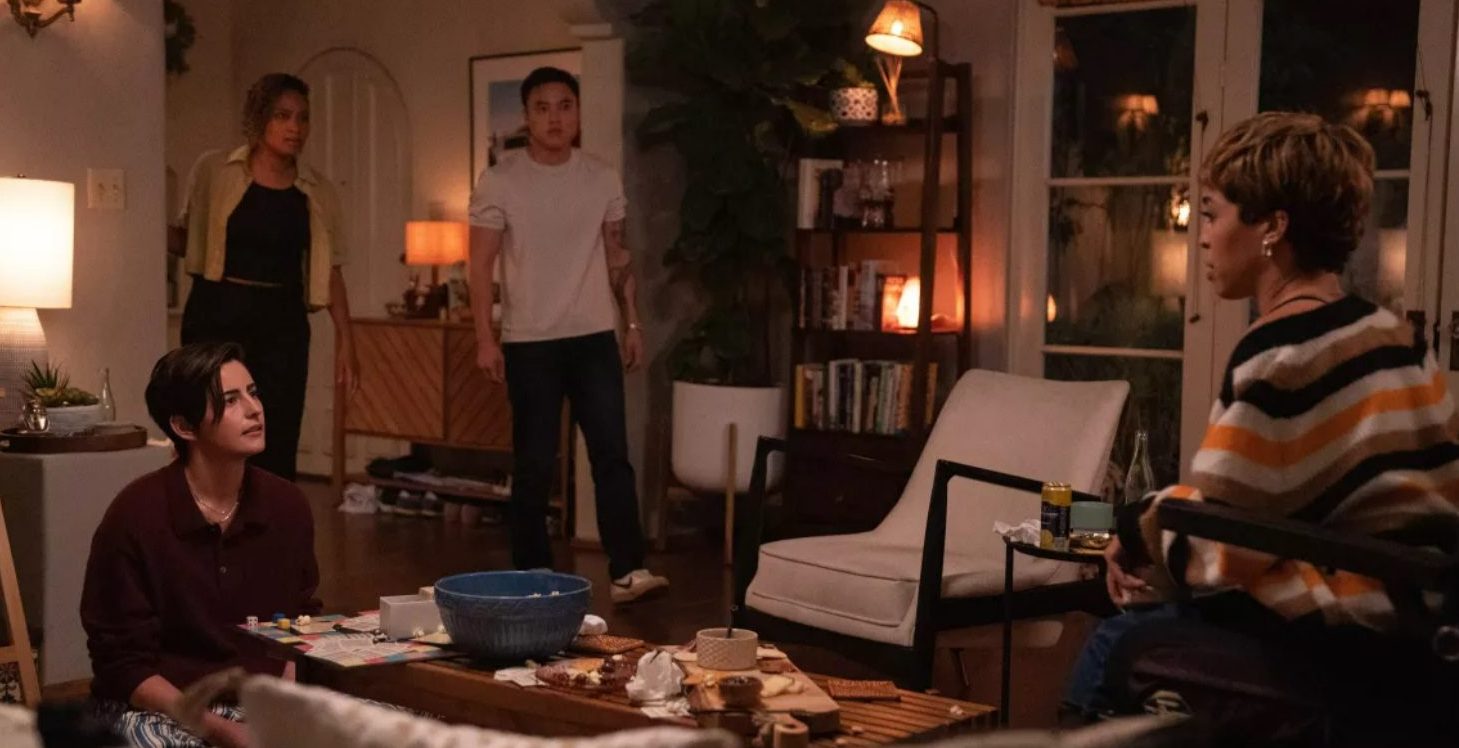 A still from The L Word: Generation Q S3 episode 2.

According to Shane and Alice, Angie was likely to upset because Jordi dumped her, not because they were dating. Ivy calls Shane, who appears uneasy. She does not reply to the text but does not remove it. Dani and Bette discuss Gigi and her issues.

Bette agrees with Gigi that parents should put their children first, even over relationships, and claims that Gigi is only doing her job as a parent. If Dani is going to live with somebody who has children, she advises that she needs to make sure she is prepared for parenting. The magnitude of what Dani is undertaking begins to dawn on her.

Angie determines that she is prepared for her “hoe period” since she is unmarried and in her first year of college. At the art exhibit, she immediately meets a boy; they click, and she kisses him as she leaves. With her selected date, Alice is less fortunate.

She comes off as a little strange, and it is soon discovered that she is trying to convince Alice to enter the Nexium cult of sex, which puts Alice back where she started in terms of dating.Alice holds Shane responsible for her aversion to commitment, which has caused her to leave every other meaningful relationship she has ever been in.

Bette and Tina from The L Word: Generation Q.

Although Shane is fumbling, she is sincerely making things happen with Tess. Shane decides to acquire the second pub with Tess to go about things differently this time. While Bette and Tina are having a good time, Tina needs to get in a car to return to her work and her lifestyle in Canada.

Tina becomes irate when Bette begs her to stay. She believes Bette again requests that Tina put her wants and life on hold. Tina becomes impatient and gets in the vehicle to head to the airport, despite Bette’s insistence that she does not.

The L Word: Generation Q S3 Episode 3: How To Watch

The L Word: Generation Q S3 Episode 3 will air oN Showtime Channel for us natives while it will be available for streaming on Amazon prim video, Roku premium channel, Fubo tv, and Showtime app at the dates and time for the fans watching it from abroad.