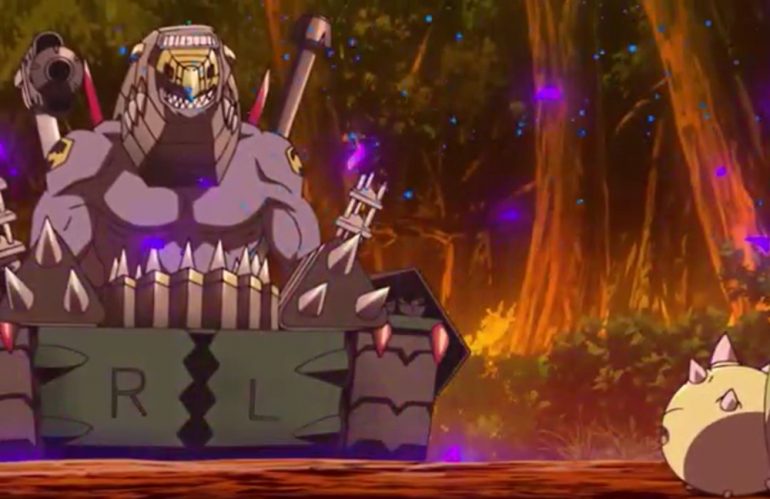 The crew has become separated on the mysterious new continent and the confusion caused by the rocket explosion in the real world. Granted power to vicious Digimon that bared their fangs at Taichi. Taichi witness Hikari being taken away by Skullknightmon. Taichi and Agumon persues Skullknightmon, but they got left behind. Agumon tells Taichi not to give up on Hikari since no one will save her.

Taichi informs his crew via his watch about Hikari. Waregarurumon and Yamato can’t believe that Skullknigtmon was still alive. Taichi reveals that he is going after Agumon and Kishiro said he would continue investigating the rocket incident. They both decided that they will meet up after completing their mission. Joe is still at the hot spring pond enjoying himself with a Namani’s crew. They can’t let him go since they find him to be funny and entertaining.

Digimon Adventure Episode 30 will be released on Sunday, 27 December 2020, at 9:00 AM JST. This Anime releases its new episode every Sunday. This post may contain spoilers of the upcoming episode, so make sure to be careful when you continue. You can also check this Anime on its official websites on Crunchyroll and AnimeLab. Allow me to take you to some of the development of this Anime below.

Megadramons are flying in numbers in the sky; they started blasting the jungle with cannons. The jungle started burning, and every creature that lives inside is trying to escape for their lives. On their way, Agumon notices that they are not alone in the jungle. He stopped and warned Taichi suddenly; they were surrounded by trees that evolve into Woodmon. The Budmons also show up, making Taichi and Agumon be scared since they are outnumbered.

The boss of Woodmon asks Taichi if he is here to destroy their jungle. Taichi explains what is happening and said that he and his crew would never destroy the jungle. Taichi reveals that he is looking for his little sister, and Woodmoon doesn’t know what he means. He explains that she is a human girl and a Digimon with black armor kidnaped her. He asks if they have seen her, and they look at each other.

Suddenly they heard a sound, and Woodmon said it is Hunt, but they wish to leave in peace. Their world is where the strong feed on the weak to compete for evolution. Taichi realizes what Woodmon is saying since he has witnessed other Digomons swallowing each other. Woodmon said they would chase prey to the ends of the world, referring to himself and his crew. The evil Digimons started feeding on the weak ones and manage to block the way.

Woodmon said that they must try to find another route to escape. In the sky, Megadroms are attacking, and on the ground, Allomons are blocking their path. Taichi saw a safe route and tells everyone to use it to escape. They all started running, but Logmon trips and falls as the fire started to surround him. Taichi went back and carried Logmon to safety, and Woodmon’s crew decided that it is better to fight back.

They realize that it will help the little one to escape. One of the Woodmon got burnt into ashes by Allonmon, who is a dragon that spitfire. Woodmons don’t stand a chance cause they are woods that can be burnt easily. Taichi noticed that and decided to help with Agumon, who evolves into Greymon. Greymon is the same as Allomon; they are both metal dragons fighting using fire from their mouth.

Greymon unleashed Mega Flame and started punishing Allomon’s crew, and manages to hold them back. Taichi orders everyone to start running, and Greymon follows them as they try to escape. Kishiro reveals his finding to everyone and tells them what they should do. Yamato tells Kishiro to keep on investigating while Mimi and her partner Digimon continues to collect gemstone.

Joe’s partner tells him to hurry so that they can meet with others. Joe reply that he would love to do that, but he is dizzy from the heat. Tankdramon manages to catch up with Taichi and Woodmon crew and keeps on attacking. Budmon decided to face Tankdramon along with the help of Greymon. Taichi notice that Tankdramon is the boss of all evil Digimon, and Greymon manages to defeat Tankadramon’s allies.

Megadramon noticed that from the sky and decided to help Tankadramon’s crew. They both started exchanging blow, and Greymon went into the evolution again. He evolved to Metalgreymon and attacks with Giga Storm blasting Megadramon’s crew. Tachi’s crew also shows up as the battle continues while they try to protect everyone.

So far, we have managed to get the above latest updates for you; more updates will be available next week Sunday. After the release of the latest episode, we will be releasing the upcoming episode. Check the latest updates of this anime using this link Digimon Adventure Episode 29.