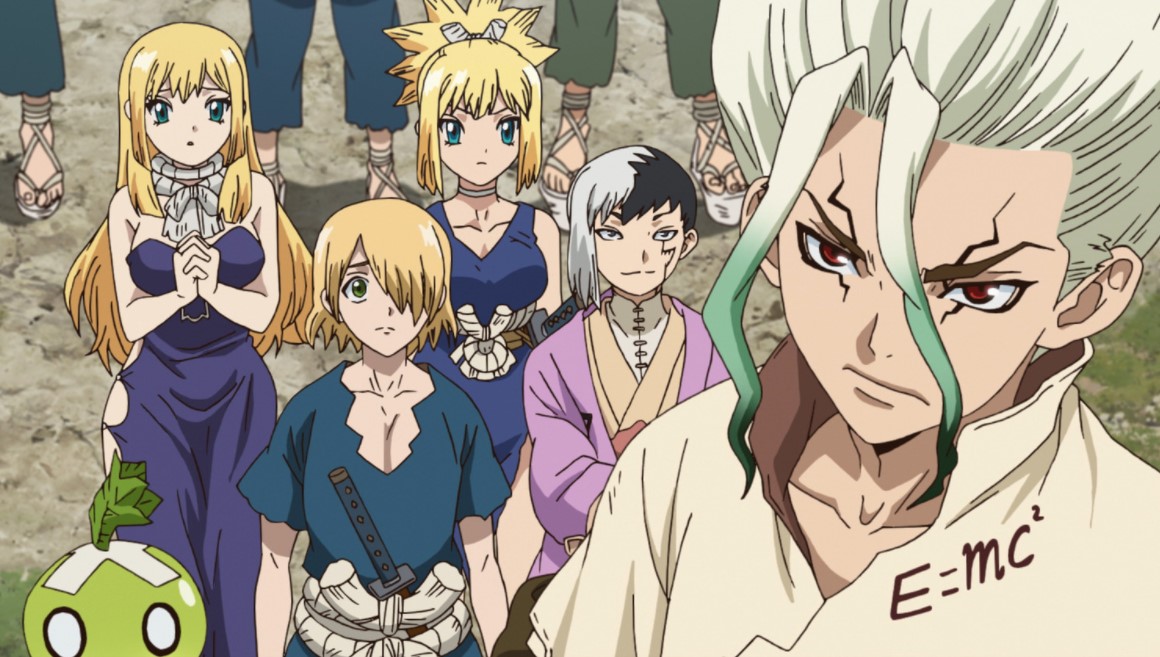 Francois is hiding while Suika thinks Stanley’s gang has spotted her. They are using Ginro and Mistukaze as their bait. One of the henchmen told Suka to freeze, but she decided to escape. She comments that she believes that freeze is when water turns into ice. Suika said she could not let that gang catches her since the mission will fail. Francois realizes that Suika, Ginro, and Mistukaze lack 21st knowledge in combat since they don’t know that freeze is warning them not to move.

Stanley’s gang is surprised why Suika is not stoping since they told her to freeze. They realize that Suika is planning to return to the base and warns Senku that the enemies have arrived. Suika started to roll using her mask. Stanley’s gang started chasing her, and they got lost since she is good at hiding. Francois notices that she only has a knife as a weapon to fight back. The gang manages to corner Suika and point her with machineguns.

One of them orders for Suika to be shot. Francois throws a knife, realizing that it is a do-or-die situation. Mitsukaze notices the knife and realizes that he has to use it to untie himself. Francois is glad that Mitsukaze will do something about the knife since he risked his life training to react to projectiles instinctively. Mitsukaze jumps up and catches the knife while his hands are tied up.

When he catches the knife, he also kicked Stanley’s henchman by doing a backflip. He unties himself quickly, and Ginro is surprised by witnessing the skills that Mitsukaze is using. With a single swoop, he also unties Ginro, who thought the knife would cut his belly. Mitsukaze told Ginro that he is leaving everything to his hand. Ginro is so scared, thinking that they will shoot him. Stanley’s gang noticed the knife and started to react since they were focusing on Suika. 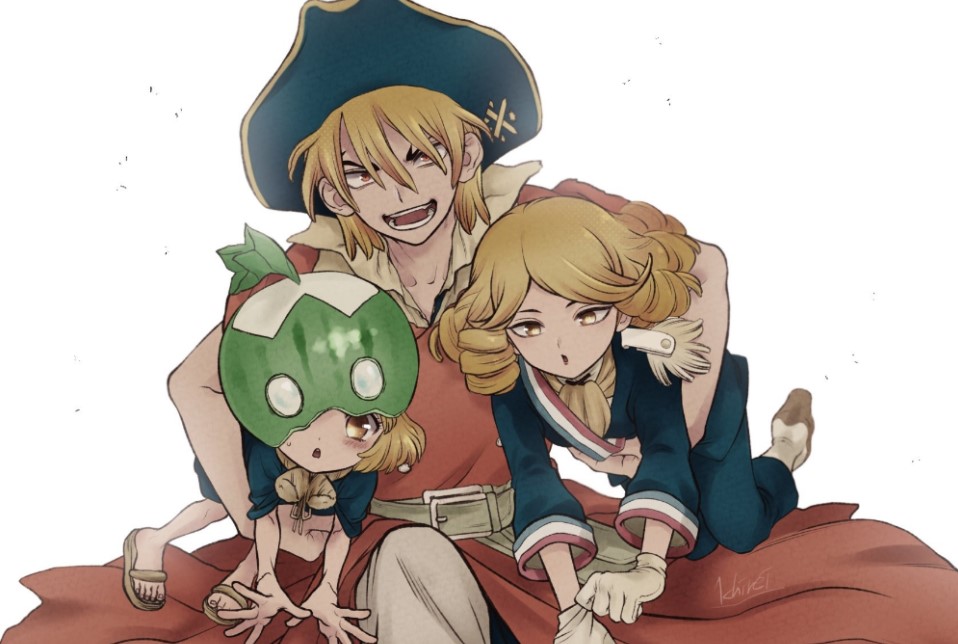 They are wondering how their ropes are untied so quickly since they didn’t see it happening. Mitsukaze left Ginro, who is complaining that he should have left him tied. A scared Ginro took a big piece of wood and started to fight with Stanley’s gang. He comments that he won’t let Suika face death. Mitsukaze smiles at a distance realizing that he has left a capable man who can do the right thing. Ginro realizes that his training hasn’t gone to waste since he has started as a village guard.

One of the powerful henchmen blasts a smoke towards Ginro and pins Ginro with the ground. Ginro is surprised how he was caught and tied again. Francois notices that the man who takes down Ginro is Stanley. She realizes that it was Stanley vs. Ginro, and that’s why Ginro couldn’t move for a second. Francois wonders why a strong man like Stanley did not shoot. Mitsukaze is also caught and beaten, and Francois thinks Stanley’s gang is not cold-blooded murderers.

If so, they would have shoot Ginro and Mitsukaze for trying to escape. Francois concludes that Stanley’s gang are just soldiers, not cold-blooded murderers. She decided to put on an act to see if they will set them free. Francois comes out in the open and shouts that they are civilians. Stanley looks at Francois, who points at Suika that she is the civilian doctor. Francois realizes that Suika helps one of Stanley’s gang who was suffering from a spider’s bite. 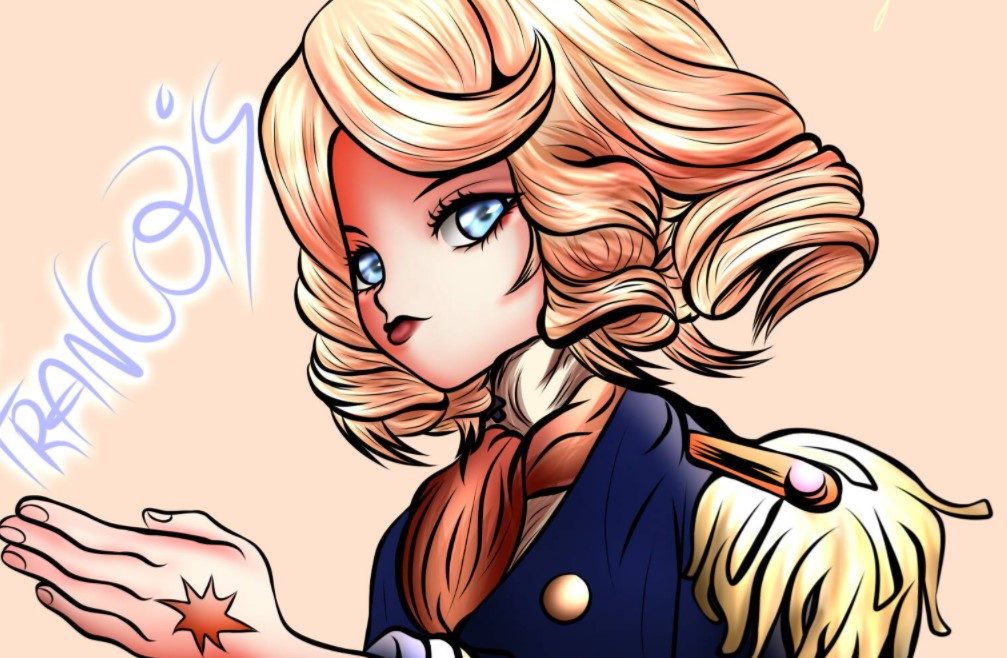 She comments that Dr. Suika treats the patients whose venom spiders bite. Francois said that Dr. Suika has just escaped from Senku, and if they doubt her, they can search for Dr. Suika’s belonging. Suika realizes that Francois is stating the facts, and she can not be caught. Francois said they share no connection with Senku’s combat unit, and they mean no harm. They are ready to do whatever Stanley’s gang will tell them to.

Francois said she would be surprised if they execute them since she has told them the truth. Suika is worried that she messed up, and they couldn’t tell others that Stanley is on his way. Francois comments that they have surrendered, but Stanley’s gang is not convinced. They tie all of them, and they realize that the one called Francois sent a transmission before they catch them. Francois thinks that she did the right thing.

At Senku’s base, they noticed the transmission, and Kohaku asks if something has happened to Suika and Francois. Senku comments that Suika and Francois have encountered Stanley’s gang. Ryusui realizes that Francois gave her position a way to send the message to them. Senku said it was a wise move from Francois since she gave them the enemy’s position. He is glad that they have found the enemy’s position first, and it’s time for them to do something.