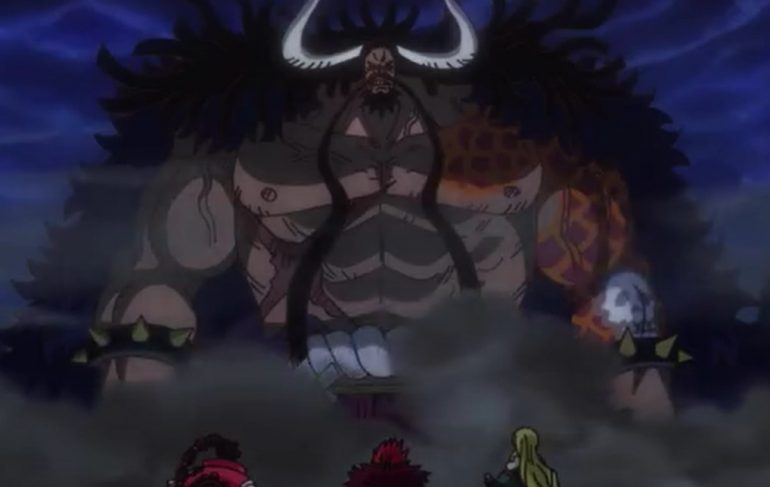 When Zoro first met with Gyukimario at the Bandit’s Bridge, he reveals that he has met with Ryuma. Gyukimari thought that Zoro was lying so that he can get Shusui that belong to Ryuma. Gyukimari knows that Ryuma passed away at the Land of Wano, and his sword belongs here. Zoro wanted that sword to complete his three sets of word style.

That day the two clashes, and Gyukimari reveals that the Land of  Wano was recognized as the Land of Gold by other countries. Pirates worldwide wanted gold, and Nobles tried to rule the Land of Gold (Land of Wano). Ryuma showed those enemies from overseas how formidable he was using Shisui. That day Gyukimari told Zoro that he wouldn’t give him the Shisui that belong to the great Wano Samurai. He can give Zoro any Kantana he likes but not the Shisui.

One Piece Episode 956 will be released on Sunday, 27 December 2020, at 9:30 AM JST. Keep in mind that every Sunday, a new episode of One Piece is released. This post contains spoilers for the next episode. You can skip them if you don’t like them. You can watch this Anime’s latest episode officially on Crunchyroll, AnimeLab, Funimation, and Netflix. Take a look at more details below.

Previously on One Piece Episode 955

Gyukimaru believes that Shisui is the Land of Wano’s stolen treasure. He reveals that the Land of Wano was taken because Shisui was stolen. Back to the present, Kawamatsu is surprised how Onimaru manages to pack the swords like a human since he is a fox. At the other side of the building, Gyukimari unveils himself and appears Onimaru saying that he has full filled his duty and then left.

Komurasaki tells Zoro that he can return the Shusui to the land of Wano in exchange for her father’s sword Enma the famed blade. It is Oden’s legendary sword and the only weapon that ever injured Kaido. Zoro is glad to hear that Enma can destroy Kaido. Zoro and Kawamatsu are happily looking at the ton of swords that are in front of them. Kawamatsu can’t believe that Komurasaki is willing to give away Oden-Sama’s sword to Zoro.

Komurasaki explains that her father was a two-full-size-sword-style swordsman. Before he was executed by the hideous man Orochi, Momonosuke and Komurasaki were entrusted to each sword that Oden used. Momonosuke is entrusted to Ame-n0-Habakiri. Komurasaki is entrusted to Enma, and both swords were made by the great swordsmiths who were famous in the Land of Wano.

That’s why Komurasaki wants to give it to Zoro because he has protected her all the time, and she has seen his true powers. Kawamatsu is not convinced; he thinks that Zoro is not worthy of being given Enma. Zoro realizes that Moria is the one who stole the Shisui and to their world before they end up in Wano. He then remembers how he fouth with Ryuma at Moria’s territory. The trio ends up agreeing on exchanging swords, and Zoro asks them to let them see Ryuma’s grave.

Meanwhile, at the Flower Capital, the citizens are at the Public Cells where prisoners are displayed. Inside the Rasetsu prison, the samurai held captive there for rebelling against Shogun Orochi has not been released yet. The prisoners try to explain that the flyers they had were just a prank by Yasuie-Sama. The Moon Tattoo was just a popular design, and they reveal that they are not rebels; they must not be imprisoned like that and put on display.

While Law manages to defeat Basil Hawkins and ask him about his alliance, Law said he thought Basil allied with Kid and Appoo. Basil reveals that they were set up since Scratchme Apoo was under Kaido’s wing all along. Kaido asks them to ally with him, and they agreed since they were afraid that they would lose their lives. Basil reveals that Kaido always needs strong soldiers to make the most powerful army.

Back then, they had zero percent of escaping or fighting. Their chance of survival by obeying Kaido’s rule was 40 percent. Basil is sliced up lying on the ground, explaining everything and that they didn’t choose but to join Kaido. Kid and Killer were stubborn. They chose to go against Kaido. That day Kid lost his left arm, and they kept on fighting with Kaido, but Kaido can’t kill people like them.

He will try to break their spirit and crush them into obedience. Basil explains everything that has happened and how Kid was arrested. He then prases Law’s alliance with the Straw Hats that it is going well. Law got annoyed with Basil’s words and decided to finish him since he talked nonsense about the Straw Hats. When he gets out of the cell, there was an unknown man who was listening to everything.

Law told him that he is plotting on him to escape he is in. Meanwhile, Luffy is training with Hyogoro to master Ryuo the Land of Wano Haki. Later Sracthmen Appo is shown arriving at the Land of Wano. Meanwhile, at Onigashima, King reveals that the Numbers came back. The two Emperors of the seas ( Kaido and Big Mom) are now friends, drinking together.  Queen said that he hates the Numbers because they drink too much.

Kaido announces that on the night of the Fire Festival, they will have the greatest party ever. Big Mon said that it is going to be an anniversary. Queen is surprised that the two have become friends after trying to kill each other. Kadi reveals that the Animal Kingdom Pirates and Big Mom Pirates decide to ally. That shocked everyone inside the building and Mama said they would dominate the world together. Kaido said after that, they would go back to kill each other.

This week that all we have about this Anime’s latest youtube preview and updates. You can also use the following link to read more about this anime One Piece Episode 955