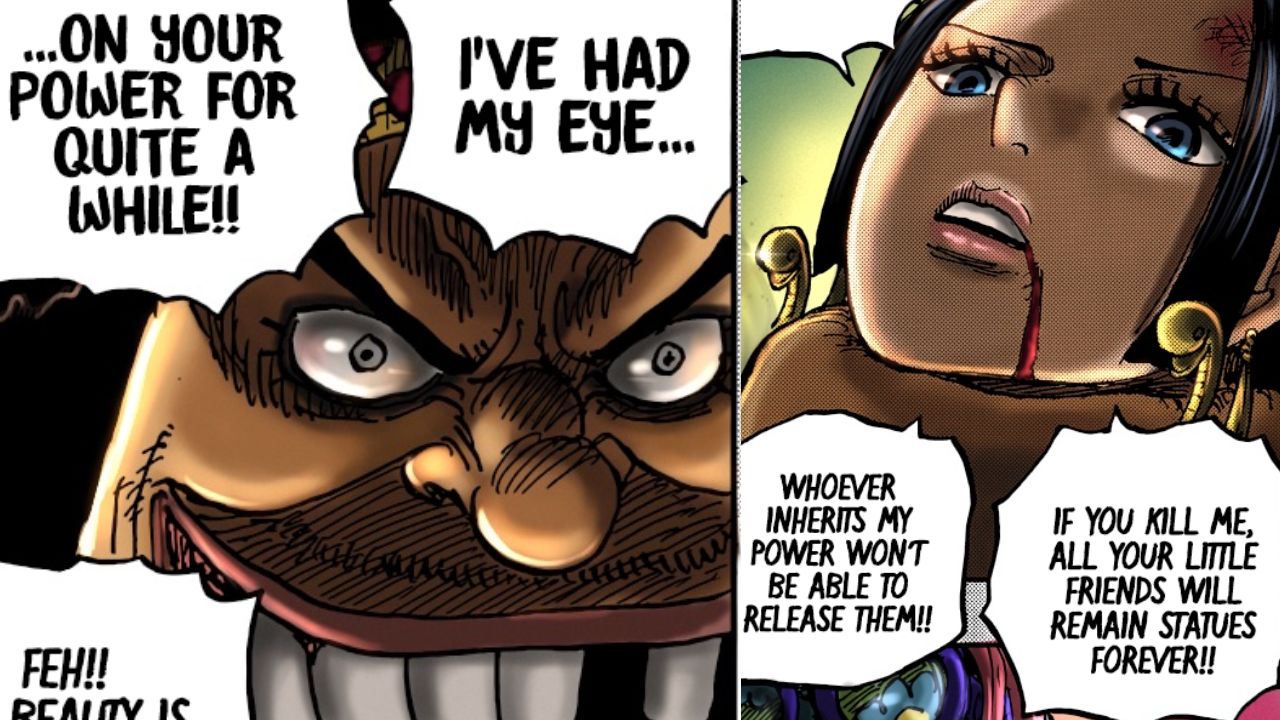 The raw scans and full summary for the One Piece Chapter 1059 are out and it is almost unbelievable the events that took place in the said chapter. It is almost like a fan has started to write One Piece after the end of the Wano and it is getting too intense and fiction is on the next level. One Piece Chapter 1059 started calmy with Marco, Shanks, Red-Haired Pirates and later with the Straw Hats including Yamato then it started spamming with an action-driven in the Isle of the women with Marines and the Blackbeard Pirates.

The Chapter was titled “The Captain Koby Incident” and if you guessed it, then One Piece Chapter 1059 does focus on Koby with his mission of arresting the former Warlord “Bao Hancock” the pirate empress that was highlighted before the Wano arc started. The cover page of the One Piece Chapter 1059 continues with Germa’s invasion and we see Oven and Katukari Punching each other due to the hallucination caused by Ceaser’s gas.

The chapter begins with Marco getting off of the Red-Haired Pirates’ ship near Sphinx Island (Whiterbeard’s Hometown) and he thanks them for the ride. Whereas, Shanks still insists on him becoming crewmates on his ship but Marco says to stop joking and that he is too old to keep playing babysitter of the great pirates.

A little flashback of Wano occurs where Luffy is surprised to hear that Yamato won’t join them in their voyage (just as we were) but she tells him that they both wouldn’t be at ease if they left Wano together and if some external force like Amajaki appears again then there wouldn’t be any to protect it. Luffy agrees and says he is leaving Wano in Yamato’s care. 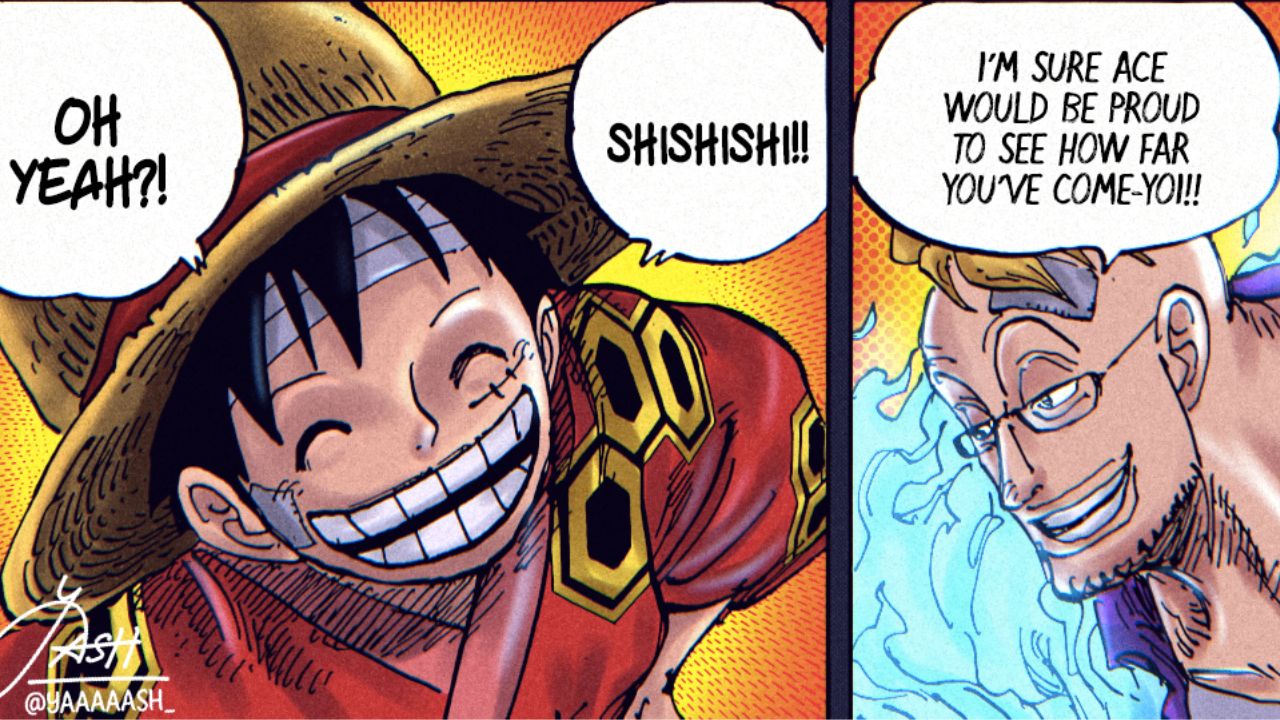 Marco also arrives and tells Luffy that there is a ship nearby that will give him a lift. Luffy thanks him for saving him during Ace’s execution and Marco tells him that he comes a lot far from it and Ace would be proud of him. He leaves the Island saying that the new generation is in the hands of you youngsters.

The main focus of the chapter begins with messed up Amazon Lily Island where Bao Hancock says that this wouldn’t have happened if she were here. She says that it might be time to get married to Luffy. A flashback appears on the same Island a few weeks back and we see the Marines infiltrating the Amazon Lily with Koby and Vice admiral Yamakaji. Vice Admiral orders to deploy the new Pacifistas “Seraphins” which appear to be a model of children with white hair and brown skins.

#ONEPIECE #ONEPIECE1059SPOILERS WITH THE RELEASE OF CHAPTER 1059 OF ONE PIECE WE FINALLY GOT A LOOK AT THE NEW SSG SYSTEM … AND ILL BE HONEST THESE DESIGN’s HAVE BEEN A 10/10 FOR ME 🔥. It’s literally all the young versions of each Warlord but with Lunarian DNA … so sick 😫👀🌅 pic.twitter.com/loCETtUgEH

The Pacifists resemble the warlord Mihawk and Boa Hancock when they were children. Blackbeard Pirates also infiltrate the Island at the same time and Blackbeard says that he wouldn’t let the powers of Hancock fall into the hands of the Marines. Koby insists and asks Hancock to come quietly with the marines and they will stop this infiltration and get off the Island.

However, Hancock rejects and turns most of the Marines and the Blackbeards pirates into stones. Blackbeard barely manages to get his hands on Hancock and uses his powers to not let her use her devil fruit while their new bounty is also revealed. Hancock says that if he kills her then all the people who have turned into stone would stay that way. Blackbeard hesitates to let her go and undo the things and asks Koby what they must do. He also refers to Koby as Hero and thanks him for his favor that let him dethrone Ochuko and become the boss of the Pirate Island. 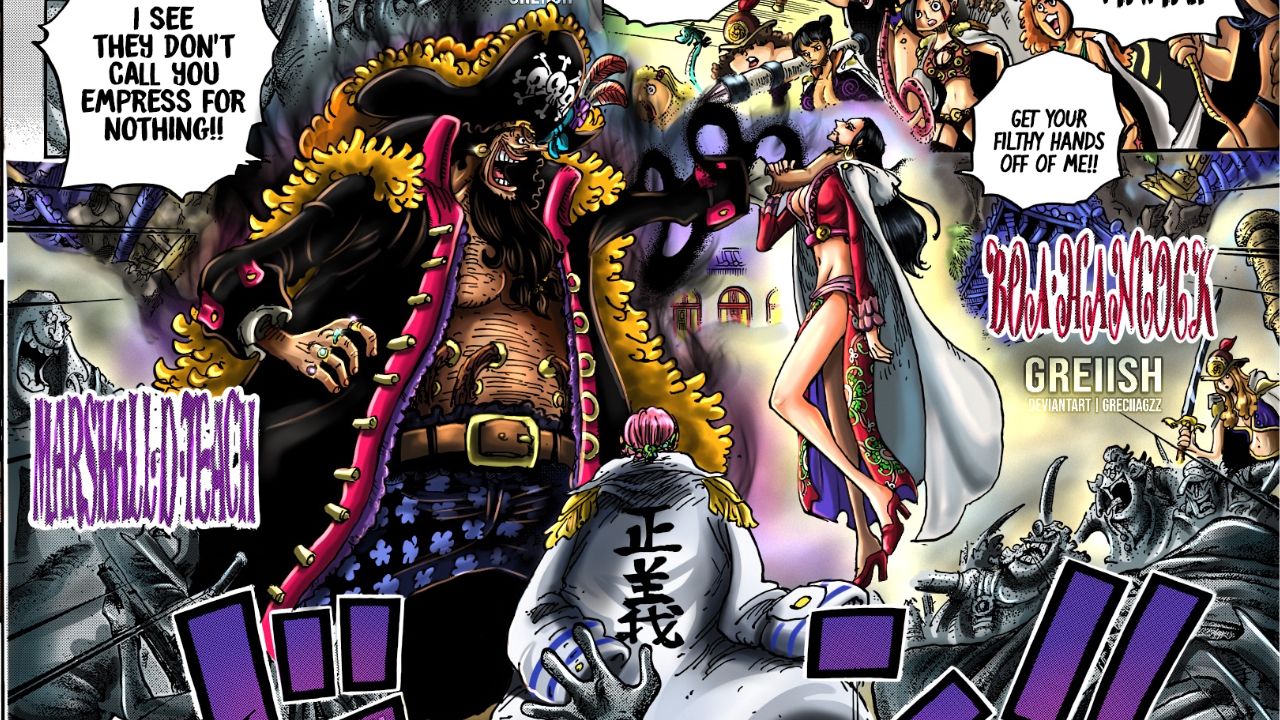 Rayleigh arrives and tells Hancock to undo everything and he will see that the Marines and the Blackbeard Pirates will get off the Island. In the present day, we see Rayleigh, Shakukyaku who is also revealed to be the former empress of the Amazon Lily Island and the Captain of the Kuja Pirates in a conversation with Hancock and the others. Rayleigh says that if it wasn’t for his reputation they got lucky because his old age wouldn’t help him in fighting Blackbeard alone. In the last panel, the marines inform the Headquarters that Captain Koby has been abducted by Blackbeard and their current status is unknown.