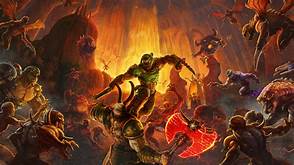 The game, “Doom Eternal,” is a first-person shooter video game developed by ID Software and published by Bethesda Softworks. In the Doom series, it is the fifth main game and a direct sequel to the 2016 Doom. Doom Eternal was released on March 20th, 2020, for Windows, Playstation 4, Stadia, and Xbox One, with players eager for its planned release on the Nintendo Switch as well.

Besides being critiqued for its extensive storytelling, Doom Eternal has been showered with compliments right from the get-go for its campaign, graphics, level design soundtrack, and its combat mechanics.

Like its predecessor, Doom Eternal, involves the player to develop certain tactics and fight in various arenas, deciding which enemies to kill and go after and using these bonuses to move forward. The player plays as the character “Doom Slayer,” an ancient warrior who battles the dark and demonic forces of Hell in the first-person shooter. They are given access to a vast number of weapons, ranging from firearms such as shotguns, super shotgun, heavy cannon, rocket launcher as well as melee weapons such as the chainsaw, the “crucible blade” energy sword and the retractable arm blade called the “Doomblade.” The arm-blade provides the opportunity for a larger variety of quick and violent “glory kill” executions, which drop extra health. The game requires players to aggressively engage with the enemies in order to collect extra health, ammo, and armor to proceed in the game.

Hugo Martin. The creative director has said that there will be twice as many demon types as in the 2016 release. There are several new demons being introduced, such as the Marauder and Doom Hunter, while also continuing some of the previous ones such as the Pain Elemental, Arachnotron, and Archvile. The new release also entails fresh movement mechanics such as wall climbing, dash moves, and horizontal bars to swing from.

“It’s coming out a bit later than the game is on current consoles and PC, and really that’s just because we want to finish the game on those platforms and then give Panic Button – our partner on it – the time they need to really pull those refinements into the Switch version. It’s not going to be a huge delay, but we haven’t announced the launch time frame yet, but they are fantastic partners. They are masters of that platform.”

The plot is quite interesting and features several years after 2016’s DOOM, where Earth has been overrun with demonic forces, wiping out 60% of the Earth’s population, under the now corrupt Union Aerospace Corporation.

While there are panic and fear and the remaining people has banded into two separate groups, the Doom Slayer must combat the evil and demonic forces of Hell and in order to do so, must find and come in contact with various enemies in 12 levels of the game using his wits and his weapons. As the players eagerly await the release of “Doom Eternal,” the company Panic Button has reassured us with a soon release date!