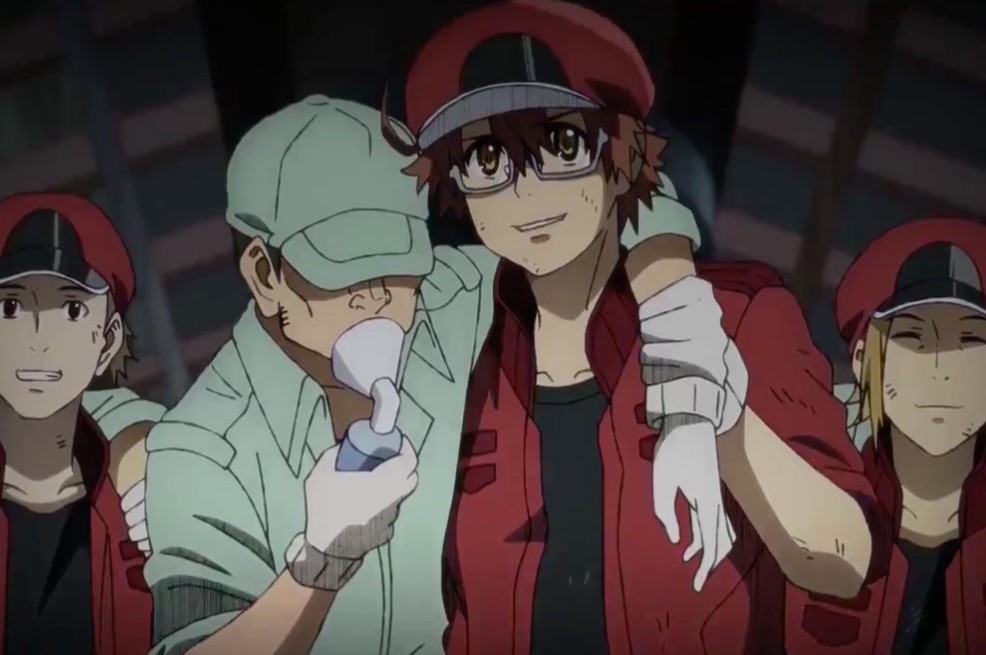 This anime is scheduled to premiere early in Jan 2021; check the weekly schedule below to know when it airs. It is set inside the human body where tons of cells work together. They are working hard to keep the body healthy, and the most important cells are Red blood cells and White blood cells. Those two work together and take care of the body defeating any threat that enters inside the body.

Erythrocyte and a Neutrophil always face difficulties working in bad conditions and unhealthy body parts. Later AA2153 and U-1196 are sent to another body in blood transfusion and met with  Neutrophil J-1178. Red Bloo Cell is also known as Erythrocyte, and she is new to her job taking care of breathing and other gases. During her busy schedule, she battles with the enemies and saves Neutrophil’s life.

Cells at Work Code Black Episode 1 will be released on Friday, 8 January 2021, at 12:00 AM JST. If you want more updates about this anime, you can visit its official website at saibou-black.com. You can also enjoy watching this anime on AnimeLab and Funimation. Take a look at the updates below.

Erythrocyte is doesn’t have a sense of direction; she always did the opposite and gets lost. Later she realizes that he has already met with Neutrophil at her childhood age. A neutrophil is a cool and calm guy, but he keeps on getting in trouble. He also played a role in saving AE3803 from danger after missing training. The killer kills everything that posses a threat, and that gets in his way. He doesn’t like to see the weakling or cells that are struggling.

He eliminates the weak ones around him. Other cells recognize him as a bully and don’t like his style since he prefers to mingle with non-white cells. He is fond of Neutrophil, his best friend, and develops bad relationships with Helper T Cell and NK Cell. He thinks that the two are weak and don’t deserve to be around, but they train hard to be recognized. A macrophage is a lady who showers everyone with love, and she fights with her enemies while smiling.

Platelet has the power of healing any injuries, and she leads the army of platelets, and Helper T Cell takes care of intruders. He is the Killer T Division leader, and he went training with Killer, who gives him tough times.
Regulatory T Cell helps during the battle only if she is ordered to do so and Naive T Cell.  He is fighting to get involved in a battle, but he puts on a great show after being helped by Dendritic Cell.

Dendritic Cell helps him to evolve into Effector T Cell.  The eosinophil is a girl who knows White Blood Cell ever since her childhood. A type of white blood cell acquainted with White Blood Cell since they grew up in the same bone marrow. She focuses on killing parasites, but she is not fond of bacteria and viruses; she uses bident to counter her enemies. A dendritic Cell is a camouflaged messenger who looks like a tree and has a camera that records others’ privacy.

Memory Cell always stores past and present memories and save them in case of emergency. But he has trouble locating his memories, which makes him scared in times of emergency. He always panics when he is in danger, and Mast Cell looks after allergic and inflammatory reactions. She focuses on her orders, but others don’t acknowledge her due to her actions. She’s been nicknamed Fat Cell. Senior Red Blood Cell helps and teaches AE3803 how she is supposed to do her job, which attracts Junior Red Blood Cell.

Junior decided that AE3803 will be his teacher, and B Cell is jealous of Killer since  Killer keeps praising him. The two becomes rivalry working to prove who is better and who will be at the top. B Cell forms a relationship with Mast Cell and becomes a threat to other cells. Basophil is an unknown character who keeps things secret, and his job is secret. He appears when there is danger and gives comments when the danger is gone.

NK Cell is a lady who acts like security inside the body. She uses a machete to battle with the invades and threats, and she is also Killer’s rivalry. Cancer Cell tries to make peace by making a world with no violence and killing of each other. He wants to maintain peace even though it can be risky and dangerous.

That was all about the latest upcoming updates of episode 1. Remember that after the release of episode 1, we will be hitting again with new development.

Netflix’s Yet Another Hostage Drama Anxious People Season 1 Release Date, Plot and Where to Stream?