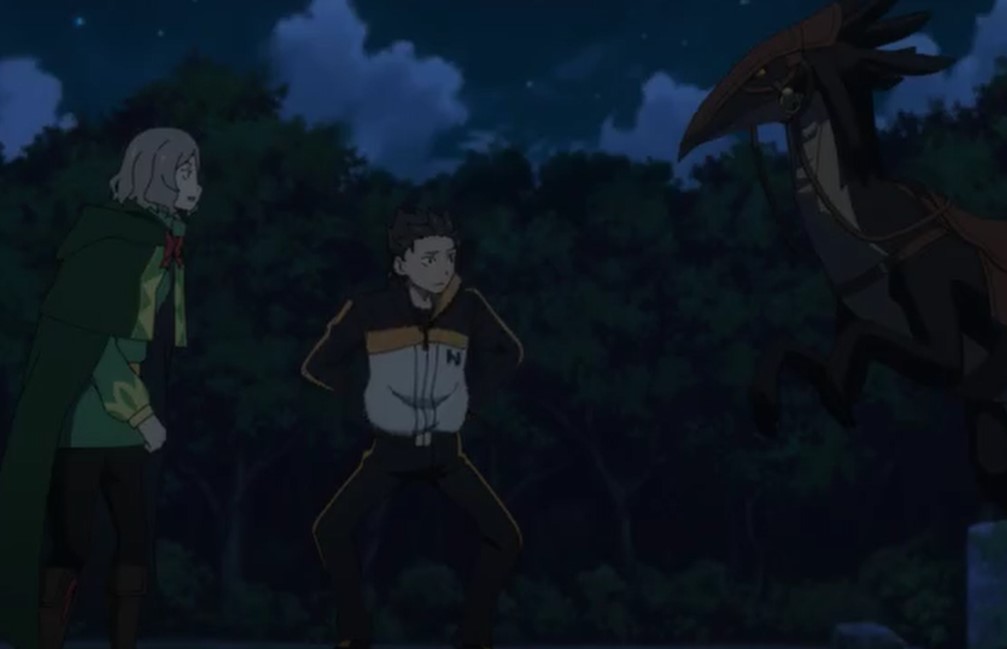 Garfiel recalls when he was young inside the Sanctuary, he was angry with something and bangs his head with the wall until blood comes out all over his body. Now he is angry with Suwen, who lets bugs inside the pit eat him. Emilia and Subaru confront him telling him that he did crazy things. Garfiel said that he never know anything about Suwen. Garfiel also adds that Suwen has won Ram over, which is why he is injured like this.

Subaru asks the whereabouts of Ram and Suwen, and Garfiel did not kill them. Grfiel replies that he did nothing and he is going to break the entrance and put an end to all of this. Subaru comment ts that is Garfiel do that the Sanctuary will be closed forever. He also asks him he wants that to happen, and Garfiel said yes because everything is a problem. Garfiel started climbing the stairs heading towards the entrance of the Sanctuary.

Re: Zero-Starting Life in Another World Season 2 Part 2 Episode 42 Release Date and Recap 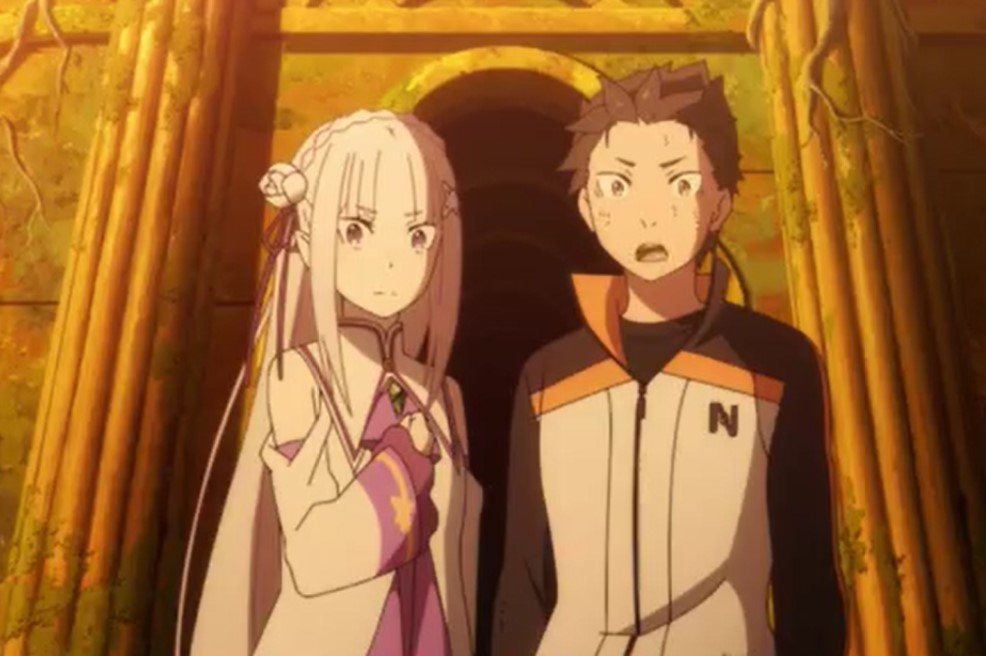 Previously on Re: Zero-Starting Life in Another World Season 2 Part 2 Episode 41

Emilia stands in front of him, blocking his way, and Garfiel asks her what she is trying to do. Emilia asks Garfiel what he is afraid of and why he is acting tough, making himself look bigger. Garfiel replies that he is not afraid of anything, and she knows nothing about him. Emilia said she knows since she has been living in fear for all her life up until today. Emilia reveals that she left all the bad things in Puck’s hands so that she could forget about them.

But she still has not figured out what she needs to do. Emilia said she would find out what to do, and Grfiel tells her to get out of his way. Emilia interferes with an angry Garfiel telling him that he has already found something for himself. Subaru also comments that it is true that Emilia has failed the trial once. But Emilia will keep on trying, unlike Garfiel, who gave up and ran away.

Garfiel gets angry, scratching his teeth, and Subaru asks him if he has a grudge against his mother, who abandoned him. Garfiel recalls the last picture of his mother abandoning him when he was young. Subaru reveals that Garfiel’s mother left him and Frederica behind when she left the Santuary. Subaru asks Garfiel, who is shocked, what did he do about it that time. Garfiel becomes speechless, moving backward downwards the stairs. Subaru also adds that Frederica left the Santuary, and she believes that Garfiel will eventually liberate it.

Frederica left to make a place in the outside world for the people living here. Subarus asks Garfiel what he has been doing on the inside, but Grfiel keeps moving back without replying. Subaru also asks him if he wants to keep the Santuary closed off because he hates his mother. And the outside world that made his mother leave him. Subaru also asks if he does not want to be hurt here Garfiel started crying, hearing the truth that he cannot accept.

Subaru said that he would not understand until he speaks. Subaru comments that if Grfiel hates his mother so much, he can take revenge on her or bust out of here. He must not vent his anger and hatred on everyone around here. Grfiel refuses that he doesn’t hate his family and said that he wanted to make his mother happy. Garfiel started to reveal the truth about why his mother left him with his sister. He said that he was getting in the way of his mother’s happiness, and he was becoming luggage.

It was not wrong of his mother to abandon them just like that. Garfiel also said that he doesn’t blame his mom, and she left them to find happiness. Garfiel reveals that his mother died because of him and his sister, and she saw everything in his heart. After revealing everything, Garfiel decided that he will not let anyone get to the outside world. He said that he is going to be the barrier between the outside and inside the world. 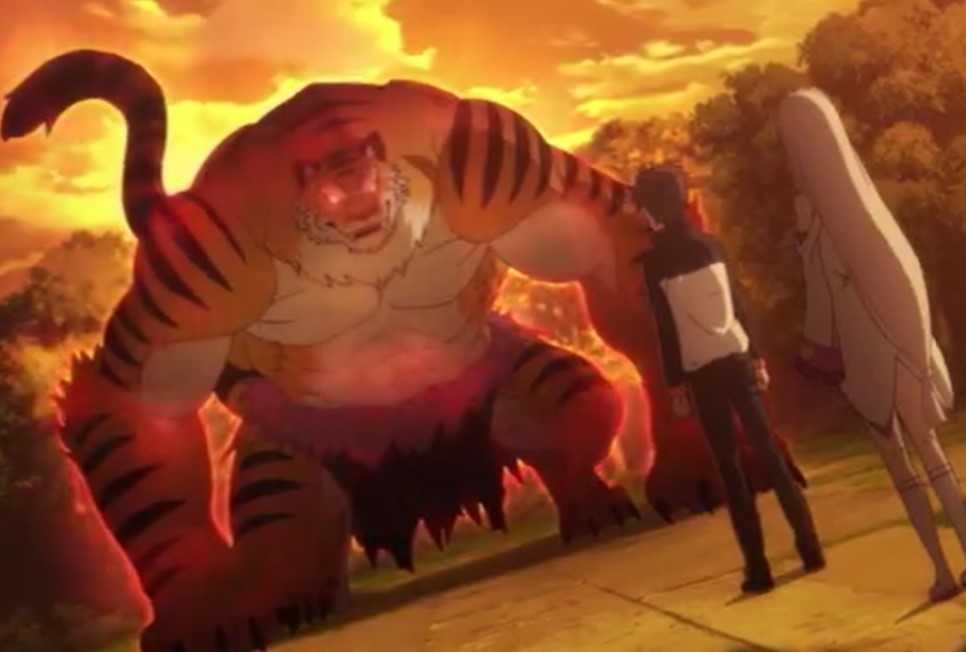 Garfiel vows to protect the Sanctuary, people, and the old hag. Garfiel transformed into his monster tiger form and said that he would make Subaru submit. The two started fighting, and Subaru uses Shamac to stop everything from moving. He defeated Garfiel in a single blow, and Garfiel went back to his normal form. After the battle, Garfiel notices that Subaru uses his sister’s necklace to stab him. That made him change back into his normal form since she shares a bond with his sister.

Subaru tells Garfiel that if he wants to stop him, he must not summon his monster. He must find the courage and stop being a coward and fight him with hands. Subaru said they are going to the outside world, and Emilia will take on the graveyard. The Sanctuary will be liberated whether he likes it or not, and Garfiel refuses to back down. He landed a powerful hook that changed Subaru’s face since he realizes that now it is a hand to hand combat.

Subaru spits his teeth out, and Emilia watches the two fightings. The two continues with their battle and Subaru unleashed a new technique. He landed an uppercut that sends Garfiel flying, and he is shocked that Subaru took him down for the first time. The two fight until they become unconscious, and before they pass out, they agreed on the same thing. Later Suwen joins them, and Subaru yells at him that it happened because of him. They both reunite again and enter the Santuary.

Re: Zero-Starting Life in Another World Season 2 Part 2 Episode 42 Preview

Let us meet again with the new update and upcoming episode next week. That was all about this week’s post.