Kim Garam leaves LE SSERAFIM, creating havoc among netizens! HYBE’s former artist Kim Garam has been the center of attention since her school bullying scandal broke on the internet. It happened a few days after LE SSERAFIM’s debut. Netizens were shocked to see Kim Garam’s bullying video circulating on Twitter, YouTube, etc. Since then, Kim Garam has been receiving public backlash and become a target of netizens’ outrage leading to various controversies and statements regarding her future under HYBE Label.

Initially, the artist denied the allegations. However, nothing could stop public fury, knowing HYBE was letting such a controversial individual continue under its name. Even international fans had openly expressed their disappointment. However, the time has come to put a full stop to this matter. After all, HYBE Label has finally released a statement regarding Kim Garam’s contract termination!

On 20 July 2022, Source Music made an announcement. Finally, Kim Garam leaves LE SSERAFIM since HYBE Label has terminated her contract. The statement was regarding the decision made in regards to LE SSERAFIM member Kim Garam and plans for the future activities of LE SSERAFIM. The agency clearly stated that they have decided to terminate the exclusive contract with Kim Garam and expressed their sincerest apologies to the fans and to those who have shown love and support to the group for causing concern over the controversy involving the members. 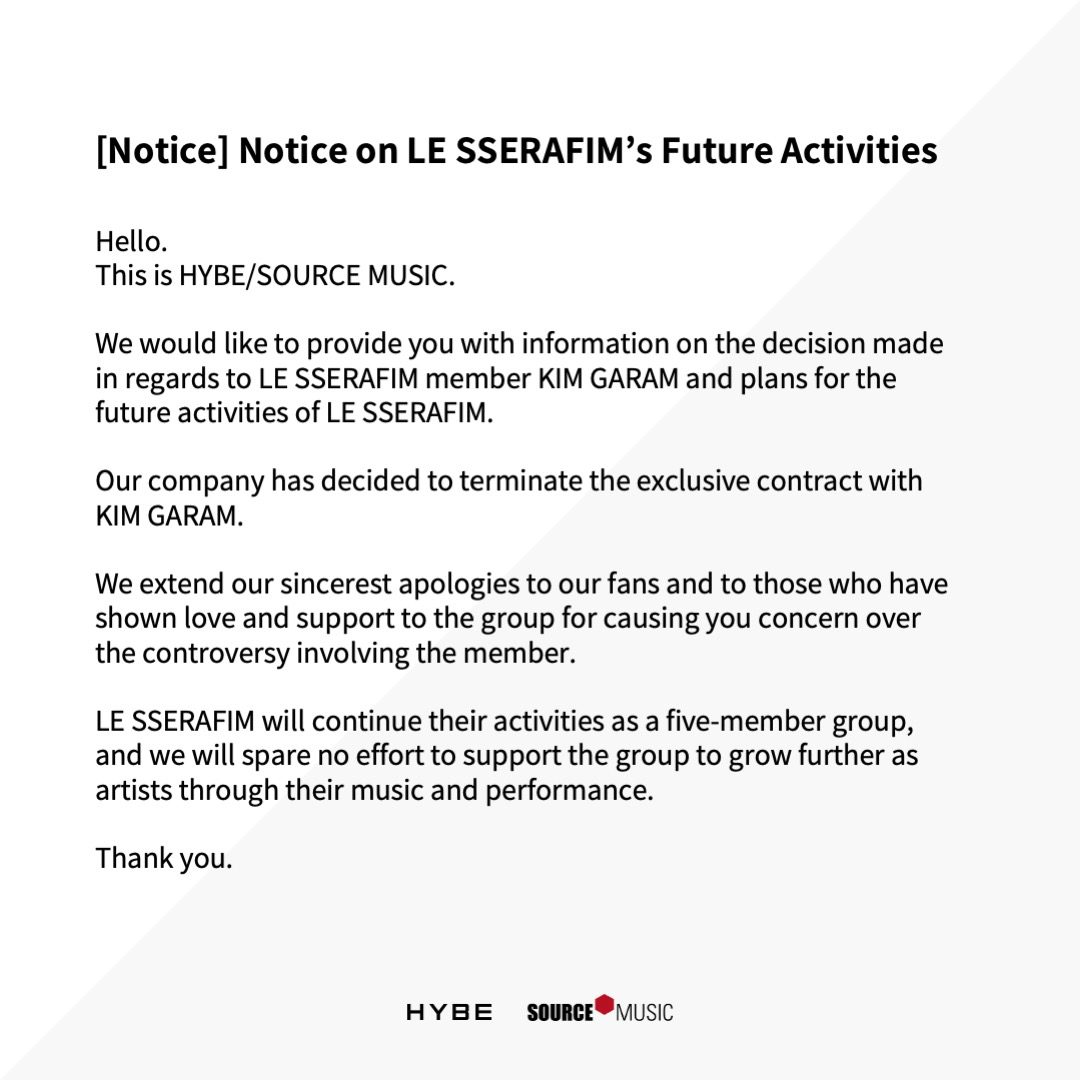 Furthermore, the agency reported that LE SSERAFIM will continue their activities as a five-member kpop group. The company will support the group to grow further as artists through their music and performance.

After news broke out about Kim Garam leaving LE SSERAFIM, netizens had satisfactory reactions. There is no doubt that many are happy that Kim Garam has finally departed from LE SSERAFIM. It’s a good example to those bullies who dream of becoming successful in the entertainment industry. Some even wanted HYBE to apologize to the victim. After all, Kim Garam had given a trauma that even adulthood may not heal.

Kim Garam leaving HYBE or LE SSERAFIM may not heal the victims’ scars. But, hopefully, the victims may overcome this battle for a new start!