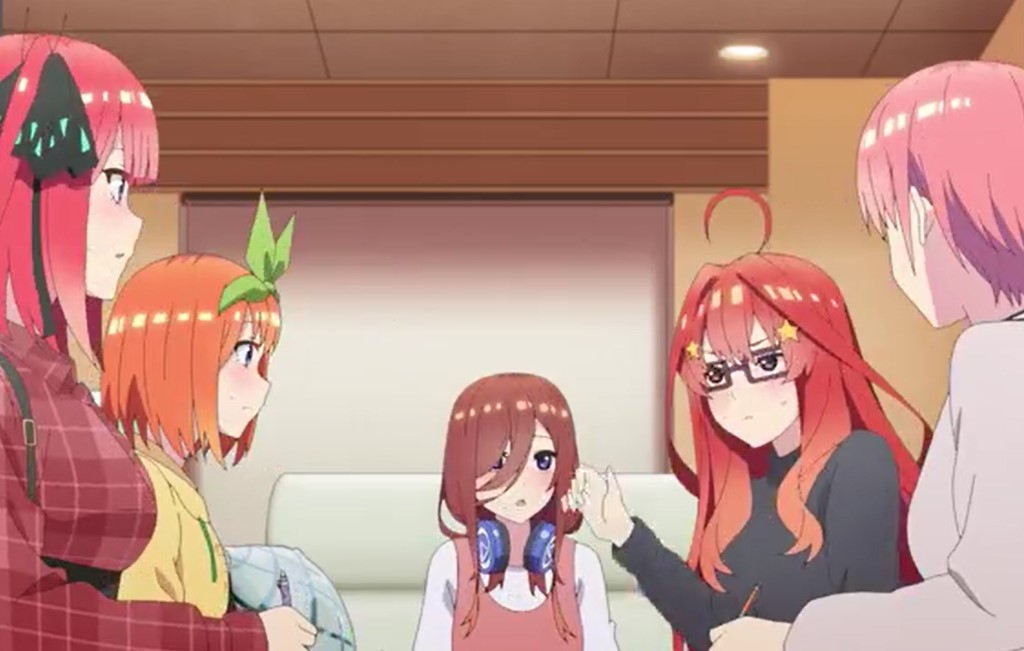 Earlier in The Quintessential Quintuplets Season 2, Futaro is worried about the girls who are slacking off when it is time for the exam. He asks Ichika if she is able to connect with Miku. Ichika comments that Miku is not picking up, but she nowhere she is. Ichika decided to follow Miku and left Futaro with Itsuki. Itsuki wanted to stop Ichika, but Futaro comments that she can say no Yotsuba. Itsuki looked at Futaro, wondering what he is talking about.

Futaro realizes that Itsuki and Yotsuba are good at impersonating each other. He remembers that they fool him all the time. Itsuki realizes what he means, and she comments that she is not good at impersonating someone. She reminds Futaro of the time she failed to act like Ichika. Futaro comments that as soon as Miku arrives, they will have her wear Itsuki’s tracksuit and see the results. At the same time, Miku and Nino are at the same hotel.

Quintessential Quintuplets Season 2 Episode 5 will be released on Friday, 5 February 2021, at 1:28 JST.  Take a look at the latest updates officially on Crunchyroll, Funimation, and AnimeLab.

Let’s see how Futaro will handle Yotsuba below.

Miku thinks that Nino’s tea is tasteless, and Nino fires back that she is used to drinking old ladies’ tea. Nino asks how she finds her hotel, and Miku said she was following her a few days ago. Miku asks what Nino was doing with Futaro the other day, and Nino spits her tea. She realizes that terrible things have happened between her and Futaro, and she can’t tell. Nino reveals that Futaro shows up disguised and trick her, but she falls for it.

Nino recalls when she and Futaro almost had a romantic moment that she couldn’t resist. She asks Miko why she is not showing a reaction about it, and Miku responds that they do that all the time. Nino remembers all the time Futaro disguised him as another hunk that she falls for. She comments that she won’t forgive him for what he has done. It was romantic for her, and she thought that she got a guy for herself.

Miku asks if that’s all that happened, and Nino blushes since she realizes there is more to it. Nino comments that Futaro told her that he wants five of them to stick together as a family. Miku asks Nino if she will come home or continue to stay at the hotel. Nino yells at her; what is the point of them together when they are far apart. Nino asks why and Miku said because they are family and they’re nothing more about it.

Miku tries to convince Nino by telling how the five of them have changed and how they are yearning to be with each other. Miku reveals that Nino has changed a lot, but she can’t just accept it. Nino asks how and she explains everything that has changed in her life. Miku touched Nino’s heart by reminding them how they used to enjoy each other’s company when they were young. Nino tried to act like she is not affected by Miku’s words.

She replies that they can figure out alone how they stay together without her. The two started quarreling about the taste of the tea they were drinking. They are comparing the difference between black tea and green tea. They find that the difference between the two leaves of tea is the amount of fermentation. Nino laughs and slips her tough by saying she wanted to share the joke with others. She realizes that she will never have that time since she is staying alone in the hotel.

Nino thinks that it is time she forgets about the past and braces herself. She told Miku to do the same too. Nino cuts her hair so that others won’t recognize her, and Miku can’t believe it. While Itsuki is trying to impersonate Yotsuba, and Futaro is teaching her. They manage to lure Yotsuba to Futaro so that Itsuki can impersonate Yotsuba in front of her friends. Itsuki went in front of Yotsuba’s friend d and started to act like Yotsuba.

Itsuki told her that she is leaving the group, and they notice that she is not Yotsuba because her hair was not long enough. They told her that her acting is not perfect; she rather leaves it. While Yotsuba manages to catch Futaro and who told her the truth behind their actions. Youtube decided to go back and told her friend that she is quitting the group. Her friend asks that if she is joking with them, they look identical when they look at the two.

Yotsuba comments that it was just a prank since she has noticed that her friends are confused. She also said that it is the Quintuplets joke. Yotsuba explains why she is quitting the group, and she told them about the upcoming exams. They started to realize that she is stating the facts and decided to focus on their exams. Later Futaro decided to quit teaching the girls. But they convince him to come back.

Those who miss the previous episode updates can get them here: Quintessential Quintuplets Season 2 Episode 4.

River Where The Moon Rises: Ji-Soo Spills Info On His Character