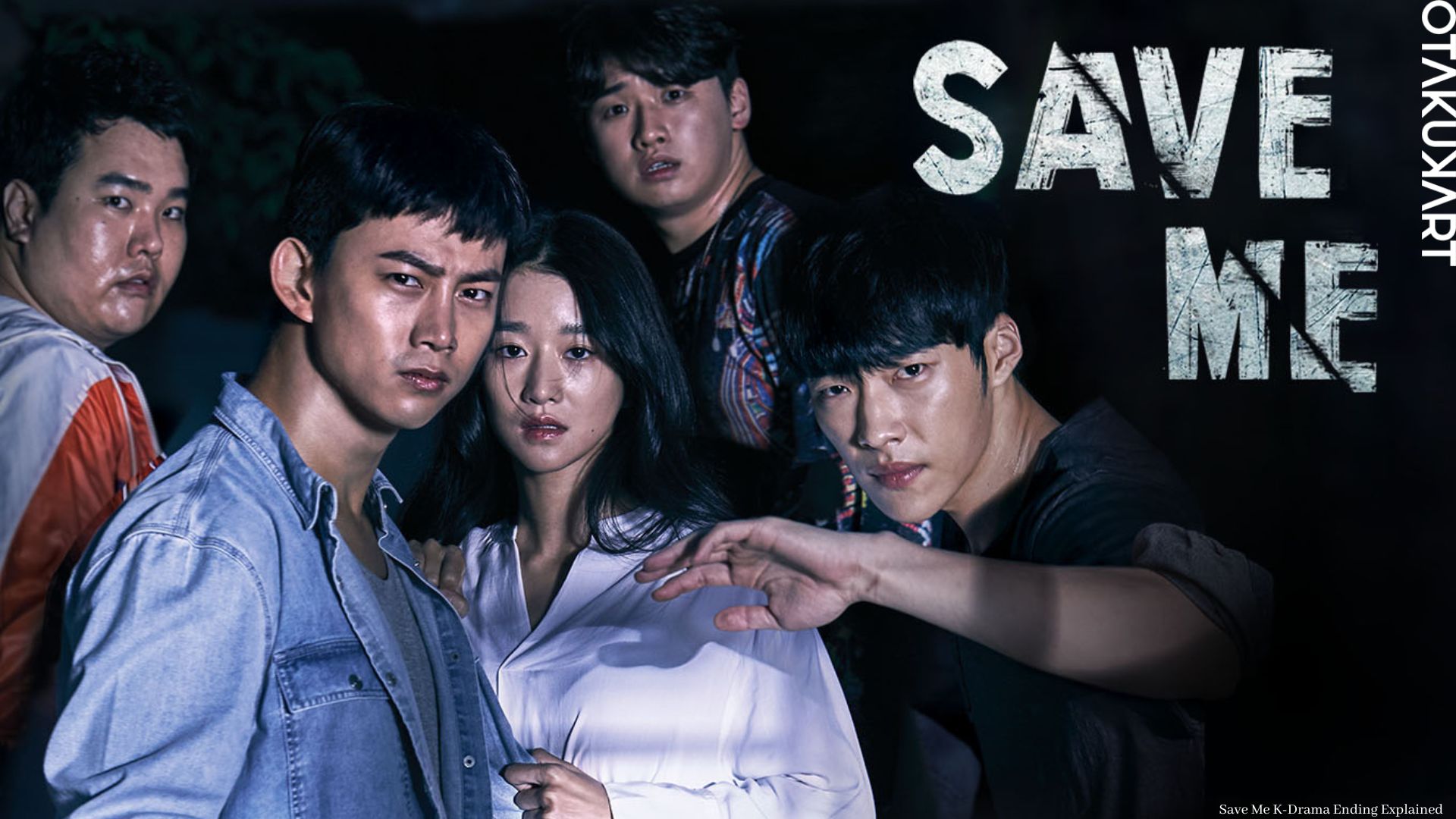 Save Me K-Drama Ending Explained

Save Me K-Drama is one of the highest-rated series in the South Korean television entertainment world. Especially Save Me k-drama ending that had fans’s eyes glued to their screens. Following the genres of action, thriller, and mystery, the drama series is still one of the most-watched. It is known for its nerve-wracking suspense and dark plot formation. The show was directed by Kim Sung Soo and penned by Jung Yi Do. Both are renowned in the South Korean entertainment industry and are known for their numerous successful projects in the past years.

Another interesting fact about the show was its adaptation of the webtoon titled “Out of the World” by Jo Geum San. Indeed, the webtoon was one of the successes in the Asian arena and was appreciated highly for its amazing plot structure and developed layers that germinated extreme dark suspense. The popularity of the webtoon also fuelled the success of the drama series. In a very short time, ‘Save Me’ became one of the globally popular K-Dramas.

Save Me K-Drama Ending: What Happened in the Finale?

‘Save Me K-Drama’ ending brings out a turmoil of emotions from everyone inside and outside the screen. Watching cult leader, Father Baek Jung Ki burn the bible as he announced to the crowd that he is more important than the scripture was one of the goosebumps moments for everyone. He urged and ordered Im Sang Mi to come to him and prove her loyalty. Following his orders, she declared herself to be his wife.

Next, in the final episode, we saw Han Sang Hwan meeting his father’s aide. Keeping her direct exchange, i.e., the incriminating voice recording of his mother, she refused to tell him anything about his mother’s whereabouts. We are taken a bit back in the past, where we discovered that Sang Hwan’s mother was pushed down a hill by his father on the night before the election because of the voice recording. 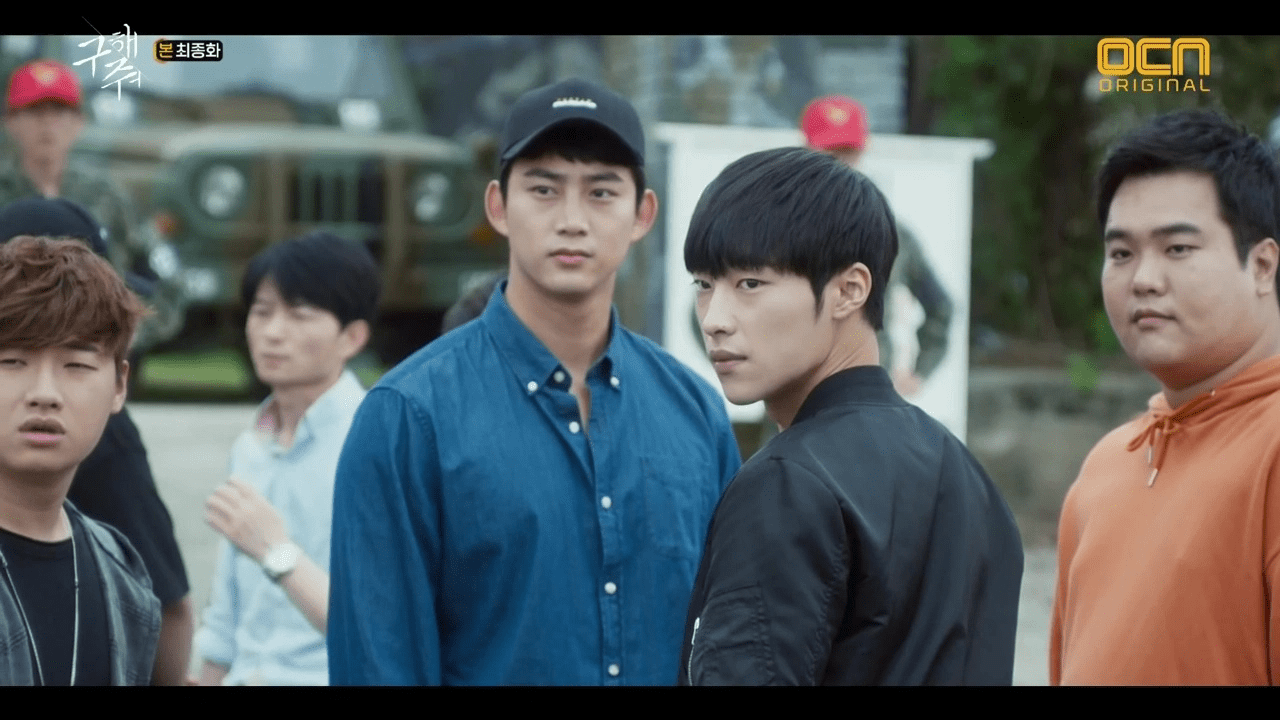 Save Me K-Drama Ending: A still from the k-drama.

On the other side, we are shown a tired Sang Mi trying to put some senses into her father’s brainwashed brain but failing miserably. While searching Father Baek’s room, faithful leader Kang Eun Sil finds a flame retardant that explains why the former’s hands didn’t burn. She is found by Father Baek and asked to pray about her sin of doubt.

Sang Hwan with Man Hee searches the local nursing homes, but there are no traces of his mother. Though, Sang Mi’s mother finds his mother after hearing a woman cry from the ambulance outside the cult’s nursing home. After hearing her pleas to call his son, Sang Mi’s mother manages to call him and share the location. Seok Dang Cheol is reported by Sang Mi as a traitor and is ordered to be thrown in the dungeon by Father Baek.

Down there, he is shocked to find his father. On the other hand, Sang Mi steals a syringe from Eun Sil to protect herself from the malicious intentions of Father Baek after they wed. After arriving at the cult, Sang Hwan decides to free Dong Cheo and look for his mother. Finding a secret door to the dungeon, he rescues him. On the other hand, we see Choi Man Hee and Woo Jung Hoon riding to the cult to help other prisoners. 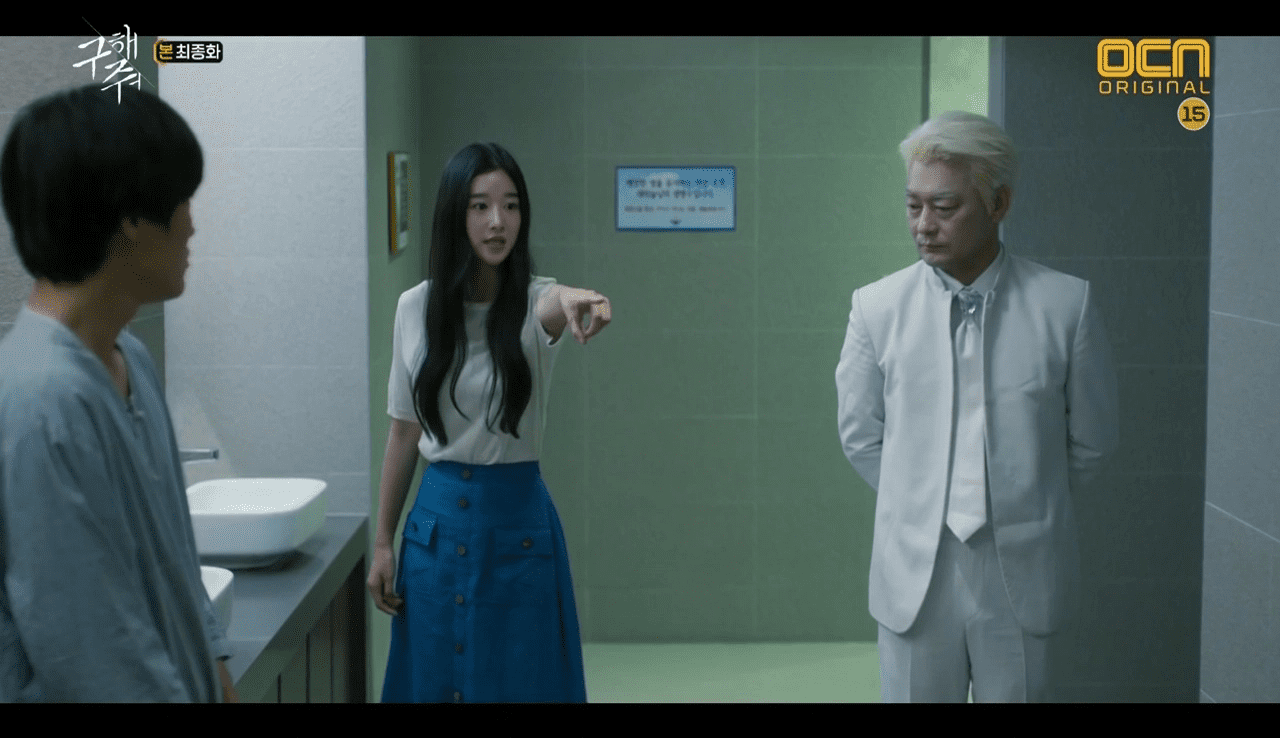 Save Me K-drama Ending: A still from the k-drama.

Everyone is left surprised when Eun Sil gives Sang Mi’s mother some street clothes and urges her to flee from the nursing home to a safe place. At the same time, Sang Mi is left in Father Baek’s private quarter by her father. In another scene, we see Dong Cheol and Sang Hwang fighting the cult members. As Dong Cheol fought, he urged Sang Hwang to save Sang Mi. While Father Baek was trying his best to force himself on her, Sang Hwan bursts into the room with a candle stick and gets in a fight with the father.

Sang Mi’s mother, Dong Cheol, Sang Hwan, and Sang Mi burst into Father Beak’s study, thinking everything was over. But that was not the case. Snatching Sang Mi from them, Father Baek holds her at knifepoint and tries to flee while Sang Hwan follows them. Father Baek is surprised to see Eun Sil spilling gasoline everywhere in the church. Telling Father Baek that a vision told her to burn the church and start over, Eun Sil grabbed the lighter and set the church on fire. Sand Mi took her chance and stabbed Father Baek with the stolen syringe. 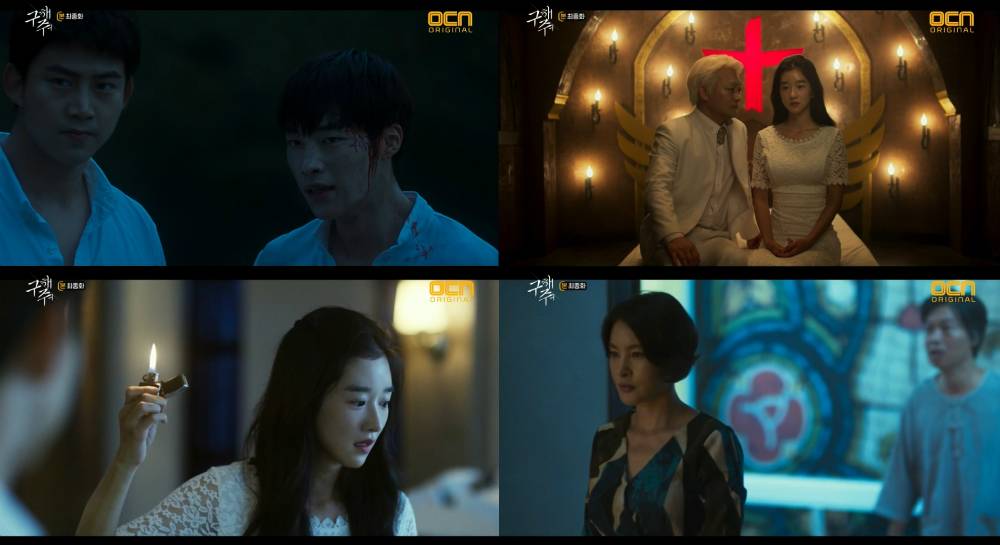 Save Me K-Drama Ending: A still from episode 16.

Sang Hwan arrives at the scene and urges her not to kill Father Baek. But fates had other plans. We see Father Beak getting back on his feet and catching fire after bumping into the lit candles. In the next scene, the police arrived on the scene while the followers tried to block their entrance. The crowd got into a fight, and Dong Cheol and Sang Mi’s mother ran straight to Wan Tae and his brother after they out after raiding the safe and took all the cash.

Things become grim when Sang Hwan joins the fight, and Wan Tae runs into Jung Hoon’s police father and his partner. He is handcuffed by them and taken away; later, his brother is put behind bars. The end showcases the four friends, all bloody and bruised but free. The news about the cult is showcased in the media. We see Sang Hwan making a public charge against his father, which ends up the latter behind bars.
Eun Sil starts a new church.

We see Dong Cheol visiting his father in the hospital, where they decide to work on their relationship again. While everyone gets their epilogue, we see Sang Mi’s father preaching alone on a street corner while chanting that Father will surely be back.

Also Read: 6 Kdramas Similar To Imitation Because We Still Cannot Get Over This Kdrama

Save Me K-Drama: Where to Watch?

Save Me K-Drama is originally distributed by Orion Cinema Network (OCN). All domestic viewers can easily access the show’s episodes through this movie channel. The drama series is free to stream for all global viewers on the K-DRAMA platform with subtitles.

Moreover, the show has a total of 16 episodes, and each of them has a running duration of 60 minutes. The first episode of the series aired on August 5, 2017, and the final premiere happened on September 24, 2017. The series witnessed a great viewership graph throughout the premiere period and received positive ratings and reviews.

What Is The Plot Of Save Me K-drama?

The plot structure of ‘Save Me K-Drama’ is packed with nerve-wracking suspense and many unexpected twists and turns that are enough to leave anyone in a state of extreme shock and awe. The dark and gritty theme of the drama series has added greatly to its genres, making it one of the unique ones. ‘Save Me’ portrays the story of Sang Mi’s family that moved to Muji-gun after her father’s business failure. They become strangers in the new place because they have no friends or relatives. 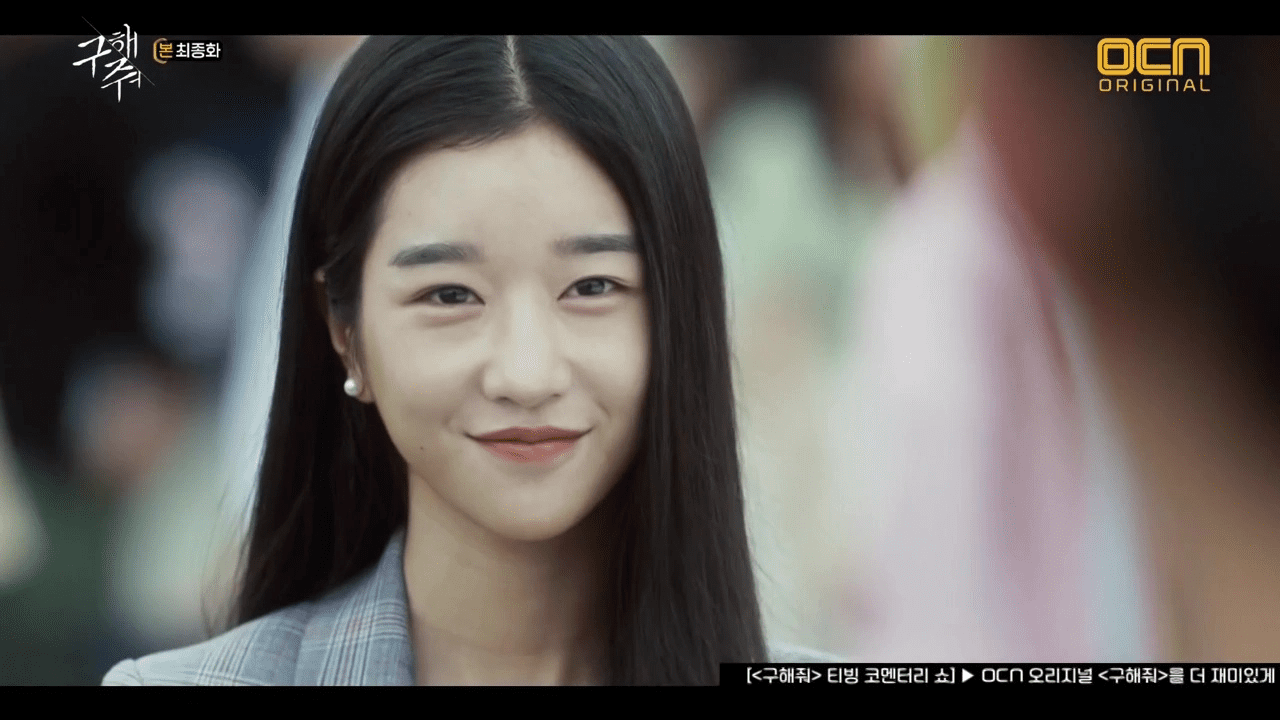 Save Me K-Drama Ending: A still from the k-drama.

Things start to go downhill when Sang Mi’s family again begins to face some problems. Their interaction with spiritual Father Baek Jung Ki of Goosunwon was the beginning of the real dark era that was enough to give anyone complete goosebumps. As she and her family start getting sucked in by the fake cult, the four young men put their everything into saving them.

Meet The Save Me K-drama Cast Members!

Talking about the cast of the series then, they are one of the talented faces of the industry and are known for their extremely sharp acting skills. Seo Yea Ji played the role of Im Sang Mi, Ok Taecyeon portrayed the character of Han Sang Hwan, Woo Do Hwan played Seok Dong Chul, the role of Baek Jung Ki was played by Jo Sung Ha, Jo Jae Yoon was seen as Jo Wan Tae, and Park Ji Young was seen playing Kang Eun Shil.

Also Read: If You Wish Upon Me Kdrama Teaser Is Out Featuring Ji Chang Wook and Choi Soo Young