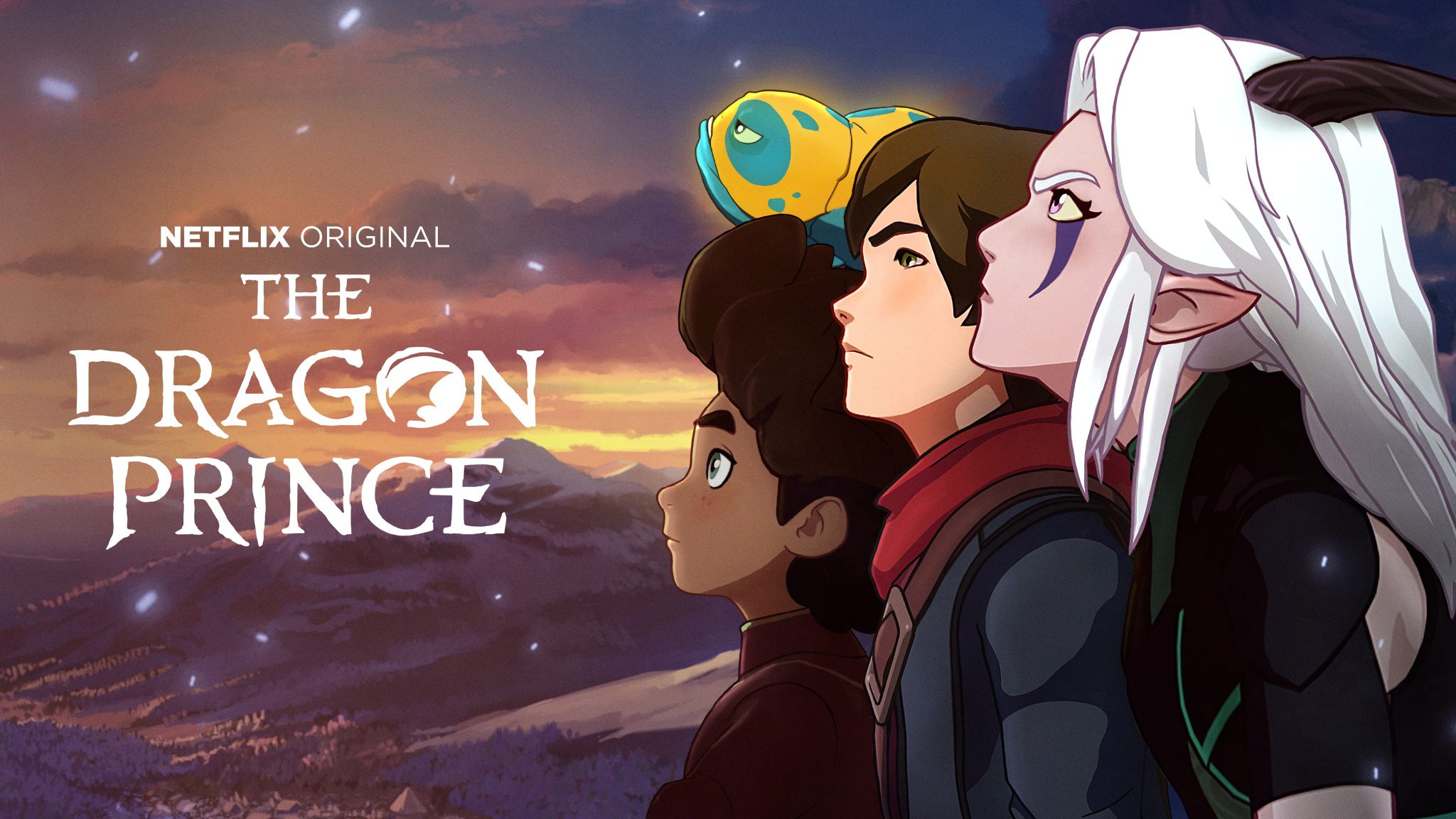 Fans have anticipated the Dragon Prince for nearly three years in the fourth season of the family-friendly animated fantasy show. Due to some production issues, many fans also wondered if the show had been canceled. Don’t worry, though; that is not the case. The Dragon Prince is a grand story about a conflict between humans and elves who disagree on whether to utilize dark or natural magic. The young princes Callum and Ezran are at the core of the fight as they team up with the elf assassin Rayla to return the dragon prince’s egg to his mother.

Moon, Sun, and Sky are the names of the first three seasons; Earth is the name of the fourth. The third season of The Dragon Prince follows Callum, Ezran, and the elf assassin Rayla as they work to make amends in Xadia and the five human kingdoms. The antagonists Viren and Aaravos are finally beaten in the last episode after failing to drain Zym, the title character’s life power. And the mother dragon Zubeia wakes up and tends to her little son.

On the surface, the conclusion of The Dragon Prince season 3 seems to offer resolution and clarity. Of course, everything changes when it is finally revealed that Claudia, Viren’s daughter, brought him back to life. The status of The Dragon Prince season 4, any changes, and the potential long-term plot for the Netflix series will be discussed now.

Is There Any News Of The Dragon Prince Season 4 Renewal?

The Dragon Prince season 4 has indeed been confirmed. Netflix announced four additional seasons in addition to 9 fresh episodes of season 3 in July 2020. The fourth season of Dragon Prince, titled “Earth,” will begin with a brand-new epic called “The Dragon Prince: Name Withheld,” according to the show’s creators, Aaron Ehasz and Justin Richmond. The fourth through seventh seasons of the show is being co-produced by Wonderstorm with the Canadian animation company Bardel Entertainment Inc. 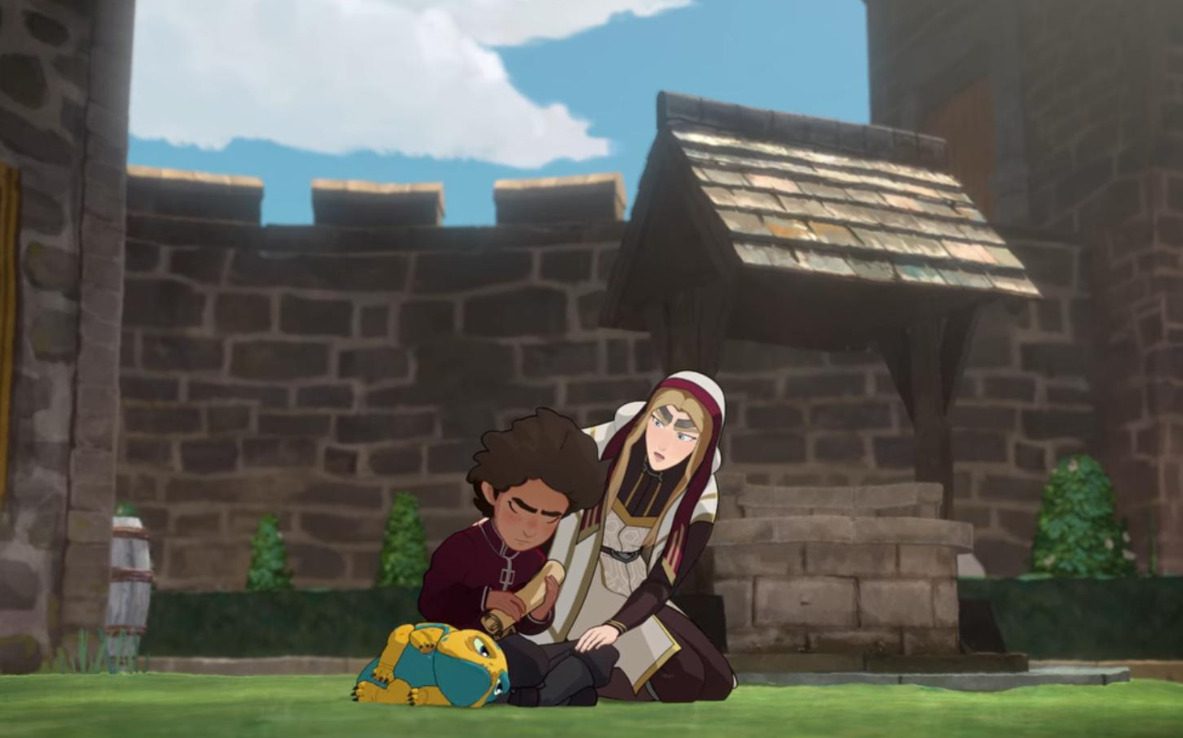 What Is The Dragon Prince Season 4 Release Date?

The most frequent question from The Dragon Prince audience is when season 4 of the well-known animated Netflix show will be released. But according to rumors, it doesn’t look like season 4 will premiere during Netflix’s Geeked Week. The fourth season of “The Dragon Prince” has not yet been released. On January 28, the creators provided an update through Twitter, noting that their team has been working hard since the entire Saga was approved to provide The Dragon Prince‘s fans with its upcoming chapters with care, love, and originality.

Even if the pandemic has affected every step of the process, it is a fact that large-scale products always take a long time. Additionally, they are creating new, intriguing Xadia locations for the fans to explore, as well as the plot and scripts for those locations. It’s possible that the sudden renewal of four more seasons affected their production method. It gives the creative team the uncommon gift of being able to plan their four-season series out to the very end. Given that we know there will be nine episodes every season, it’s possible that they aren’t just focusing on Season 4. 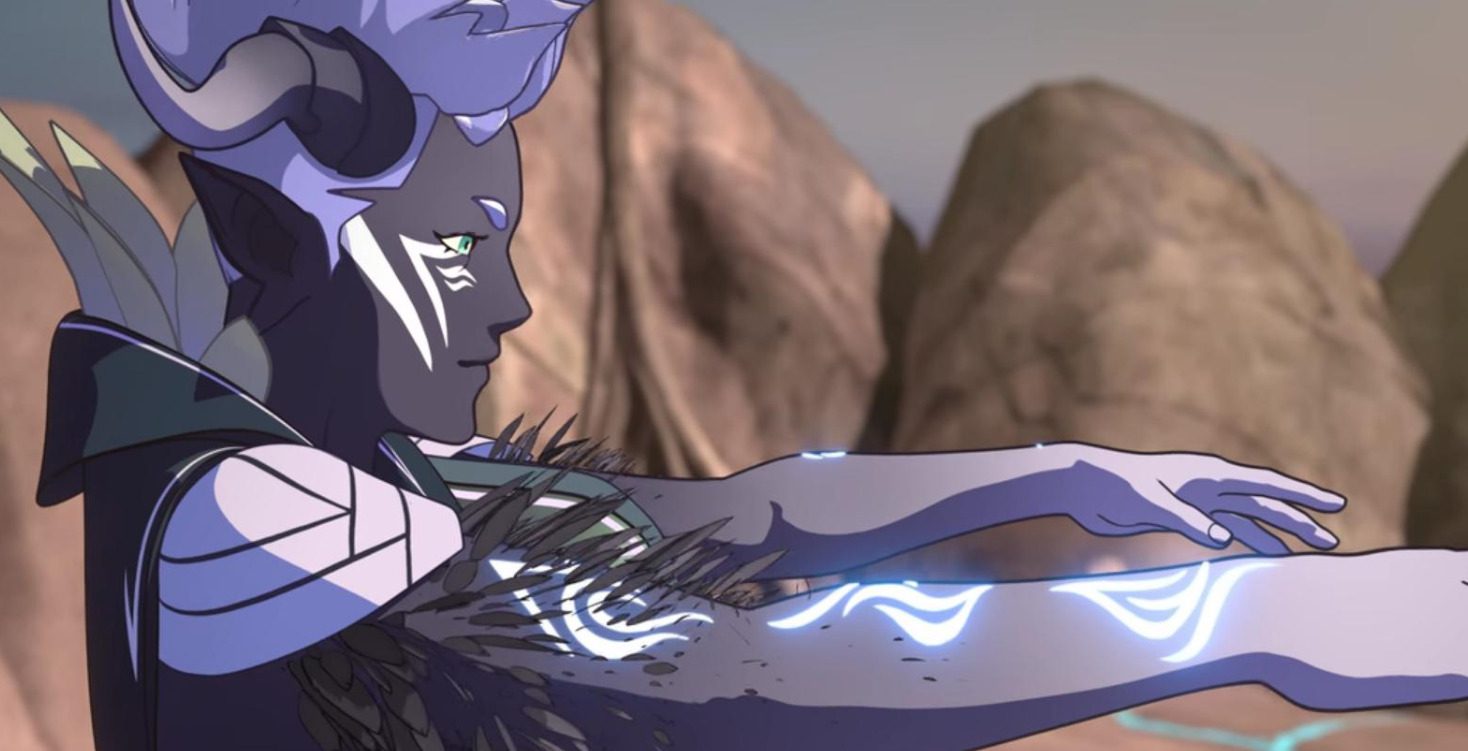 This appears to be the situation with the previous three seasons, all of which were released in 2018 and 2019. There is no fixed date for the premiere of The Dragon Prince season 4, but it is confirmed that it will happen sometime in 2022. Some fans believe it will air in the fall or winter. Though a new season was not introduced to fans during Geeked Week, Netflix did release a clip titled “The title of this article is “Mystery of Aaravos.”

The caption is, “The time has come for the enigmatic figure known as Aaravos to take the spotlight and stake his claim to the magical world of Xadia. The Dragon Prince’s fourth season will soon be available on Netflix exclusively.”

There hasn’t been much information released regarding Season 4 other than the 2020 Comic-Con@Home panel, but fans may expect the main characters to be back. That includes Jack DeSena, who portrays human prince Callum and is best known for portraying Sokka in “Avatar: The Last Airbender.” Alongside him are Sasha Rojen, who plays Ezran, the recently crowned King of Katolis, and Paula Burrows, who portrays Rayla, the teenage Moonshadow elf assassin. 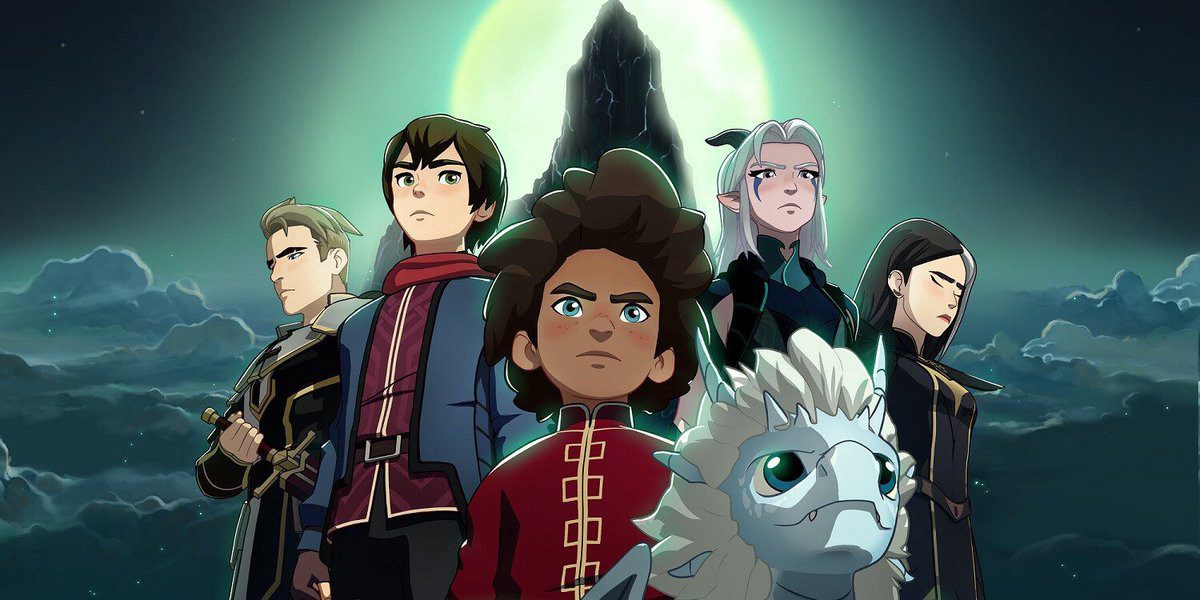 We know that Erik Dellums’ portrayal of the ancient, extinct Startouch elf Aaravos in the “Elder Scrolls” will only grow in significance over time. To complete the story, the brothers Claudia (Racquel Belmonte) and Soren (Jesse Inocalla) and their father Viren (Jason Simpson) will also need to return. The series will introduce some new characters in addition to the cast that will return. However, it is yet unknown who that individual might be. However, it is more likely that “The Dragon Prince” would hire additional voice actors rather than well-known ones.

What Is The Dragon Prince Season 4 Plot?

The events of Season 4 will begin sometime after the conflict between elves and humans over the titular dragon prince. The plot will revolve around the imprisoned magician Aaravos, whose odd caterpillar form has just begun to transform, according to co-creator Aaron Ehasz. In 2019, Ehasz stated that the upcoming two seasons would focus on understanding who Aaravos was, who they believed he was, and how they discovered what happened and imprisoned him.

Then, Aaron Ehasz continued, Aaravos has been a cunning adversary thus far, influencing the actions of the dark human wizard Viren. He will probably only get more powerful after his caterpillar form bursts from its cocoon. Viren’s daughter Claudia, who Ehasz said will play a “critically vital driving force of the story in Season 4,” was with him at the ending of Season 3. Fans may anticipate fascinating new settings for the protagonists as co-creator Justin Richmond stated that the upcoming episodes would take the plot to new locations in Xadia.

When it comes to Rayla and Callum, who have completed their goal to return the dragon prince, Azymondias, to his mother, Season 4 will need to provide an answer to the question “what now?” The two will probably play a significant role in the ongoing struggle between humans and elves.

The Key Of Aaravos

The Key of Aaravos, which was first introduced as an item that was passed down to King Harrow through his family, was one of the secrets that the greatest episodes of The Dragon Prince season 1 revealed, along with secrets about the show’s characters and the universe in which it is situated.

Callum quickly comes into possession of the Key, which is said to have the ability to unlock something extremely powerful in Xadia. Each of the six Primal Sources of magic is represented by a set of runes on one side of the cube. These runes light when they come into touch with an object or person associated with that source. What the Key unlocks and how Aaravos came to acquire and lose it are both still a mystery. 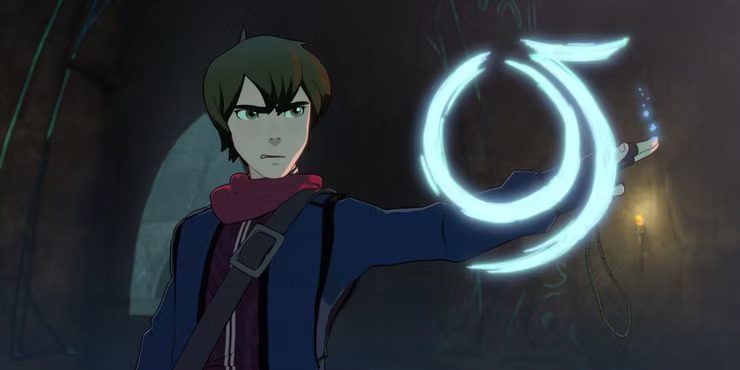 The Dragon Prince’s lore emphasizes that humans can’t access or use primal magic, so they must instead rely on a dark alternative. Callum, however, disproves this idea. Callum showed that humans have much more magical capability than they’ve been made to believe by connecting to the Sky Arcanum without using the first stone. However, it’s unclear whether this was accomplished by deception or genuine ignorance. One reason The Dragon Prince has evolved into a TTRPG is Xadia’s magic system, which enables individuals to explore various categories as they wait for season 4.

Ezran, one of the best characters in The Dragon Prince, is brave and deeply kind to animals. He has a special connection with them, enabling him to understand and interact with them. This ability is even more apparent in Ezran’s relationship with Zym, with whom he created a telepathic link that has already proven extremely beneficial for dragons and humans. However, the origins of Ezran’s gifts are still unclear. They haven’t yet been connected to any of the Primal Sources of magic, raising the possibility that perhaps other kinds of magic exist that humans can access.

It’s unclear who will take over Katolis’ throne after Ezran relinquishes and Viren goes into hiding. Given how he left things, if Ezran wanted to come back, it might be difficult for him to take on the role of King again. However, there may be other options, such as one of Ezran’s relatives, Amaya, or one of the nation’s most dependable advisors, Opeli. Given Katolis’ changing ties to Xadia, whoever ascends to the throne will bring a lot of change.

Also Read: Curtain Call 2: Everything You Need To Know!