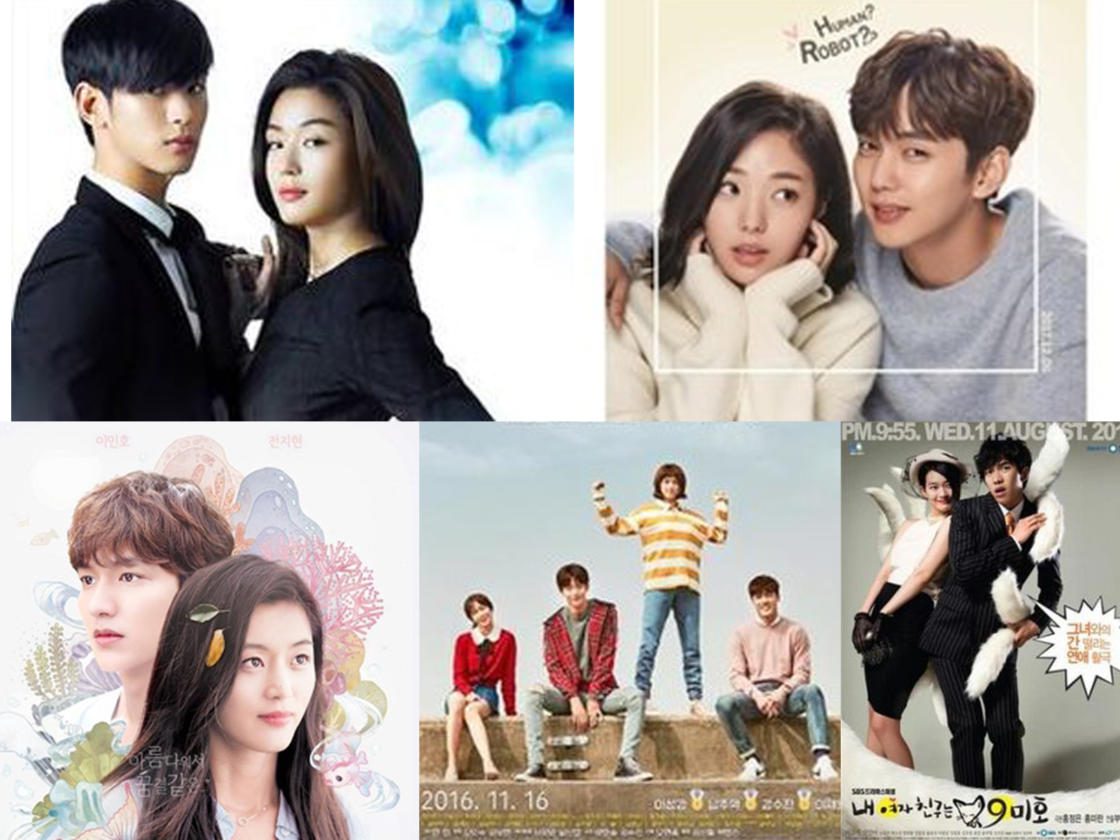 The world of K-drama is huge. Be a k-drama fan or not, there is at least one of the famous k-dramas that a non-k-drama fan has seen. From romantic comedies to thrillers, there’s every type of k-drama for every mood. Over the few years, Korean dramas have been getting popular among the masses. While many new fans are taking a look at the classic k-dramas, the old fans are moving on to the new ones. Along with a lot of amazing actors and artists, the k-dramas have shared a lot of amazing stories.

Let it be fictional or real; the k-dramas have made the art of storytelling a little bit more fun. Focusing on the small details in life, many people find k-dramas as an escape from reality. Or sometimes even a mirror. The famous k-dramas that have taken over the hearts of fans have everything from amazing stories to amazing cast members. Before letting yourself drown in the world of Korean dramas, one must go through the list of famous ones to know what the hype is all about.

So Here Are Some of The Most Famous K-Dramas of All Time!!

Surpassing all the classic k-dramas, the 2020 k-drama ‘Squid Game’ went on to become one of the most famous k-dramas all over the world. ‘Squid Game’ went on to top the Netflix US charts and even won academy awards. The k-drama stars ‘Love is Blue’ fame Lee Jung Jae, ‘Chimera’ fame Park Hae Soo, ‘Romance is a Bonus Book’ fame Wi Ha Joon, model Jung ho Yeon, and theatre artist Oh Young Soo. ‘Squid Games’ follows Seong Gi Hun, a man who has no money and has hit rock bottom. One night, he gets a chance to win ₩45.6 billion prizes in exchange for playing games from his childhood along with 456 players. 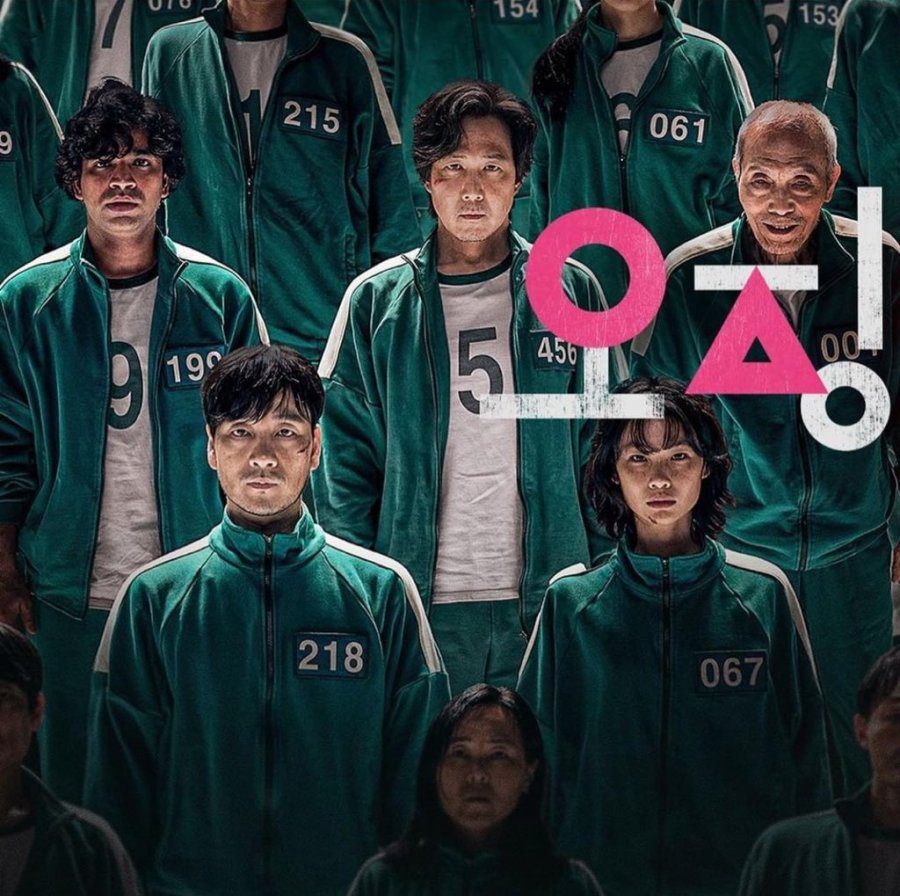 Here Are The Most Famous K-dramas of All Time: ‘Squid Games’

But as the game began, things that seemed so simple weren’t easy anymore. With each level, the characters and the viewers go through an emotional roller coaster. Throughout all the episodes, the k-drama had the fans’ eyes glued to their screens. With each episode having a runtime of 60 minutes, ‘Squid Game’ has a total of 9 episodes. Owing to its popularity all over the world, ‘Squid Game’ will soon be back for its season 2.

2. Descendants of the Sun

The 2016 KBS drama ‘Descendants of the Sun’ is one of the most famous k-dramas. The k-drama is popular for the amazing battle scenes and shirtless men. Starring’ Vincenzo’ star Song Joong Ki and ‘Now We Are Breaking Up’ fame Song Hye Kyo. Along with ‘My Liberation Notes’ star Kim Ji Won and ‘A Superior Day’ fame Jin Goo. In ‘Descendants of the Sun’, two different worlds of a surgeon and a soldier collides. The story follows Kang Mo Yeon, a cardiothoracic surgeon at Haesung Hospital. One of the best and firm doctors in her job, she isn’t afraid to admit her mistakes. 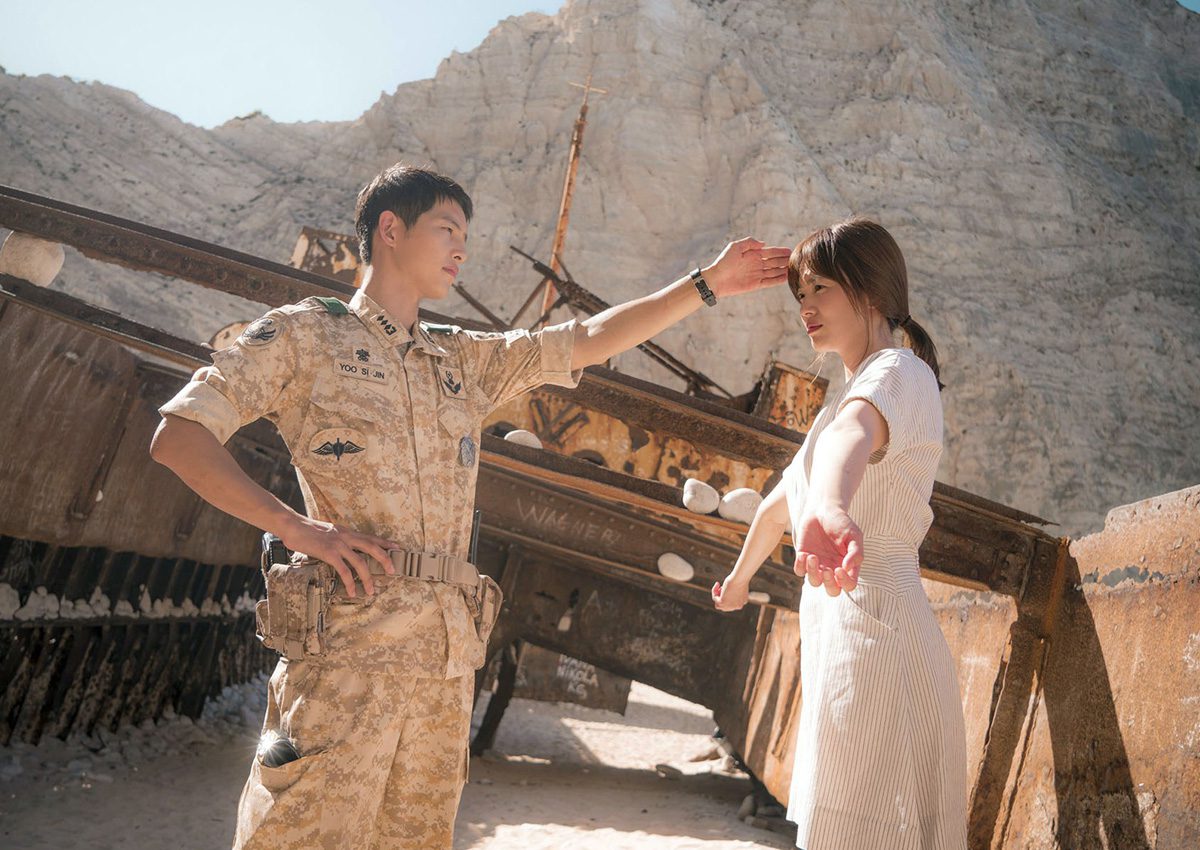 Here Are The Most Famous K-dramas of All Time: ‘Descendants of the Sun’

One day, she comes across Yoo Shi Jin, the Captain and team leader of the Alpha Team, and things begin to change. Putting his country and team before him, Shi Jin is ready to go against the order of his superiors if it is to help someone. Meeting each other during times of war, the k-drama takes the viewers through the ups and downs of two different worlds. Owing to its popularity, ‘Descendants of the Sun’ have been dubbed into several languages all over the world. With each episode having a runtime of 60 minutes, ‘Descendants of the Sun’ has a total of 16 episodes.

The 2016 tvN k-drama ‘Goblin’ is one of the most popular and classic k-dramas of all time. Also known as ‘Guardian: The Lonely and The Great Got,’ the fantasy k-drama became the talk of the town soon after its release. The k-drama stars ‘Coffee Prince’ fame Gong Yoo and ‘Cheese In The Trap’ fame Kim Go Eun. Along with ‘Strangers From Hell’ fame Lee Dong Wook, ‘Touch Your Heart’ fame Yoo In Na, and ‘Mystic Pop-Up Bar’ fame Yook Sung Jae. ‘Goblin’ takes us back to the Goryeo dynasty as it follows the legend of goblins, aka the immortal souls of soldiers. 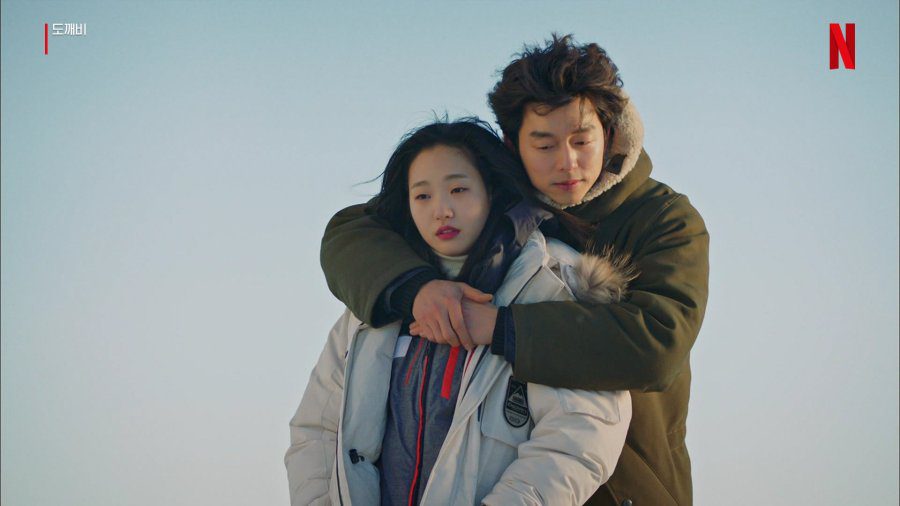 Here Are The Most Famous K-dramas of All Time: ‘Goblin’

The story follows Kim Shin, an unbeatable general in Goryeo’s military who died a tragic death. Working as the god, Kim Shin roams around the world in different time periods. He looks for his wife, who can set him free from the mortal world. As he comes across Ji Eun Tak, a high school student who can see the dead and has been through a lot claiming to be Goblin’s wife, he decides to take her in. But with the grim reaper chasing Eun Tak and other higher powers protecting her, things are bound to get complicated. With each episode having a runtime of 1 hour and 10 minutes, ‘Goblin’ has a total of 16 episodes.

Before the classics of the 2010s took over, the SBS k-drama ‘Secret Garden’ used to be the one. Starring ‘Crash Landing on You’ fame Hyun Bin, ‘The Time We Were Not in Love’ fame Ha Ji Won, ‘Shopping King Louie’ fame Yoon Sang Hyun, and ‘Tokyo Shower’ fame Kim Sa Rang is based on the body-swapping cliche. ‘Secret Garden’ follows Kim Joo Woon, an arrogant and eccentric CEO who strives to make the world ‘perfect’. Along with Gil Ra Im, a poor and humble stuntwoman. As Ra Im’s looks are very identical to the top actresses, Joo Woon mistakes her for one, leading them to form a bickering relationship. 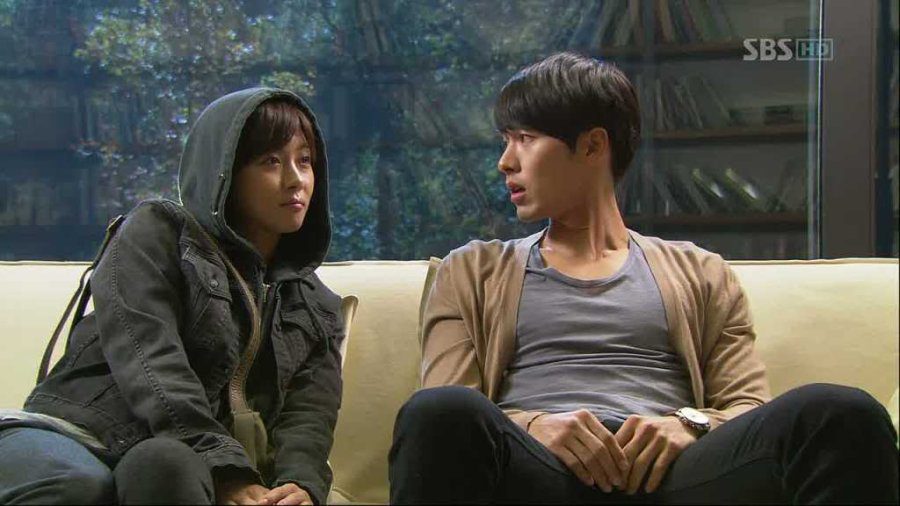 Here Are The Most Famous K-dramas of All Time: Secret Garden

But soon, the bickering turns into love as Joo Woon finds himself falling for Ra Im. As he tries to keep his feelings under control, a series of events complicates things a lot more as the two of them end up swapping bodies. While the k-drama follows the cliche storyline, the cast of the k-drama makes it worth a watch. The story is a mix of love, hope, action, magic, music, and fantasy. With each episode having a runtime of 1 hour & 5 minutes, ‘Secret Garden’ has a total of 20 episodes.

Another k-drama from 2016, ‘Weightlifting Fairy Kim Bok Joo,’ has taken over the hearts of fans ever since its release. From the cast members to the dialogues, the rom-com k-drama has everyone’s heart. In fact, the k-drama has everyone asking their crush if they like Messi. The k-drama stars’ Sh**ting Stars’ fame Kim Bok Joo, ‘Twenty Five Twenty One’ fame Nam Joo Hyuk, ‘Another Miss Oh’ fame Lee Jae Yoon, and ‘Mouse’ fame Kyung Soo Jin. The k-drama follows Bok Joo, a weightlifter who has been dreaming of winning the gold medal. 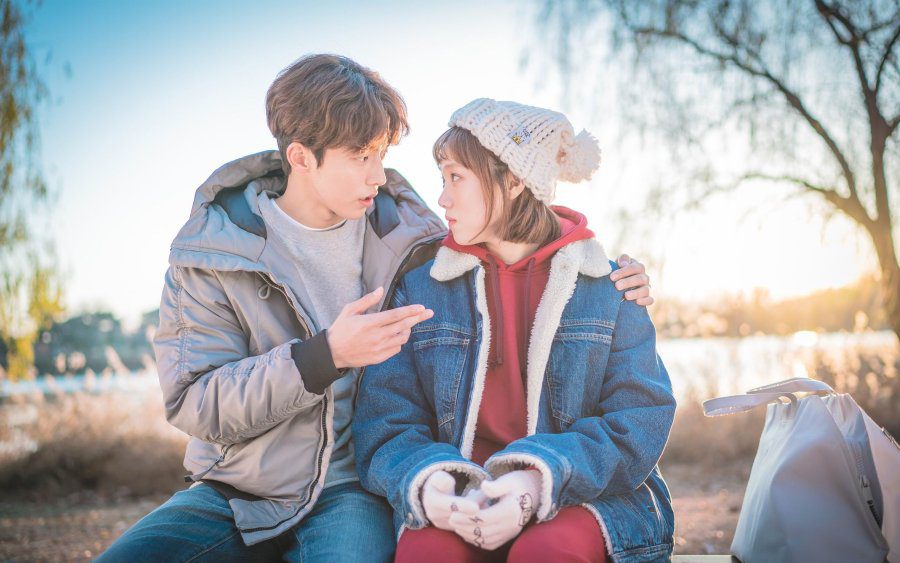 Here Are The Most Famous K-dramas of All Time: ‘Weightlifting Fairy Kim Bok Joo’

But as she meets her first love, her focus begins to change. Surrounded by elite athletes in weightlifting, swimming, and rhythmic gymnastics who work hard to reach their goals in life, Bok Joo needs to find a way to manage her career and relationship together. Not many fans are aware, but the k-drama is actually inspired by the life of South Korean Olympic weightlifter gold-medalist Jang Mi Ran. From relatable characters to the essence of every relationship, this k-drama covers it all. With each episode having a runtime of 60 minutes, ‘Weightlifting Fairy Kim Bok Joo’ has a total of 16 episodes.

K-Dramas You Definitely Need To Give A Try To!

Itaewon Class, Reply 1988; What’s Wrong with Secretary Kim; Boys Over Flowers; The Heirs; My Love from the Star; Crash Landing on You; Hotel del Luna, Moon Lovers: Scarlet Heart Ryeo, and The Legend of the Blue Sea.

Also Read: ‘Twenty-Five Twenty-One’ Ending: Do Hee Do & Yi Jin End Up Together?