Review: Mysteries Emerge and Unfold in Episode 5 of Wandavision 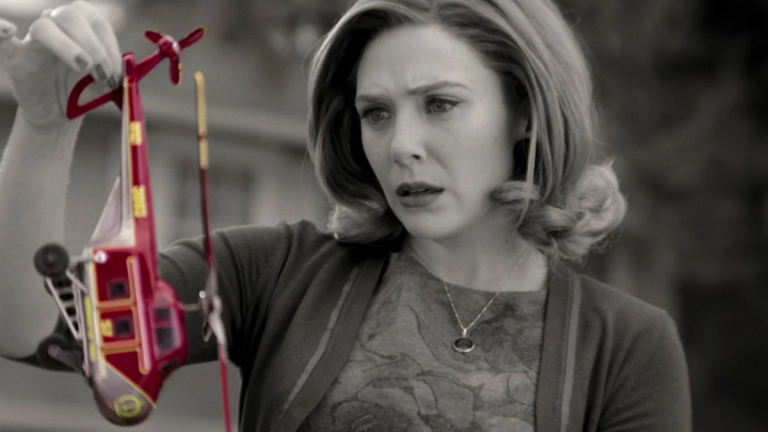 In case you haven’t heard, the hottest superhero miniseries has been here for a while. ‘Wandavision’, a miniseries from creator Jac Schaeffer, based on Marvel comics character Wanda Maximoff/Vision, instantly taking the television by storm. Making a great score of 7.9 on IMDB, this Disney+ original miniseries is something you surely don’t want to miss. The show’s type of storyline is a sitcom with a light feeling attached to it, but of course, it can go straight from comedy to drama about the lives of our beloved superheroes.

Elizabeth Olsen takes the lead as Wanda, alongside other Hollywood stars like Paul Bettany, Kat Dennings, and Kathryn Hahn. With a few episodes already dropped off, mysteries and intrigues are covering the plotline shortly. WandaVision episode 4 shook us off with the format of this sitcom series once we finally got to know what’s going on outside of Westview. The series does not slack off in the fifth episode. The tension increases, along with the emergings of conflicts that threaten Wanda’s reality. These are some of the highlights from the episode:

1. Is Wanda Really in Control?

When Monica Rambeau left Westview, she said that everything that happened was done by Wanda. But is that so? In WandaVision episode 5, we saw Wanda found out what’s going on. If Wanda doesn’t like something, then that something isn’t even highlighted on the camera. Like the S.W.O.R.D. Drone in this episode. Not only that, Wanda even came out of Westview, confronted S.W.O.R.D to return the drone she was damaged. She also bullied Tyler Hayward of S.W.O.R.D. by controlling the soldiers, so they aimed at Hayward.

Even before that, nine days before the events of this episode, it was also highlighted that Wanda invaded the place where Vision’s body was kept by S.W.O.R.D. and take it. Now Vision is alive again. Even so, at the end of the episode, Wanda revealed to Vision, “You really think I control everything?”

She admits she doesn’t know how it all started. She also said that she was not the one who made the guests suddenly ring the bell while he and Vision were arguing. We also know that Wanda’s power in this world is not absolute. She has no clue about events she didn’t see, such as when Vision helped a coworker get out of the control of reality at Westview.

Actually, what happened? Is it even though Wanda knows what happened, she is only an actor and someone who controls this world? What we suspect for now is that Wanda’s powers are actually working out of her control. When the children brought up the topic of Pietro, his power unconsciously created his own brother.

S.W.O.R.D. couldn’t identify her. She was the first to become friends with Wanda when Wanda still seemed confused by the situation. She also often comes strategically, as if she always knows what’s going on at Wanda’s house and when he’s needed. Then in episode 5, she looks like he knows his role in the world of WandaVision. She did not react when Wanda’s children suddenly grew bigger. Nor did she react when Wanda used her power near her.

Then in episode three, she and Agnes seemed to suspect Geraldine, who was actually Monica Rambeau, who entered from outside Westview. Who is she actually? There is no clue yet in this episode, other than she seems to have an idea about her role in the world of WandaVision, and he does not react to the growth of Wanda’s children. But when Wanda’s children asked their mother to fix their dead dog, Agnes asked, “Can you do that?”

Before that, it was also strange that Agnes found Sparky and bothered to wrap the dog up first. Is Agnes actually trying to bring up the topic of bringing the dead to life? If so, did Sparky actually die because of Agnes?

Billy and Tommy also caught my attention in this episode. First, we see them as if they could not work against Wanda’s power. Wanda couldn’t put them to sleep with her magic. Then when they found the dog and asked if they could look after it, Wanda said to wait until they were 10 years old. Billy and Tommy are turning themselves into 10 years, from being 5 years old, seemingly beyond Wanda’s control. So they also seem to have power in this Westview world. When their dog died, Wanda even had to prevent them from maturing physically.

Then there was the factor that Pietro Maximoff appeared again after Wanda had previously told his two children that he had siblings, but the siblings lived far away. Were they the ones who brought up Pietro, so Pietro’s appearance wasn’t what it should be?

When we first saw Hayward interacting with Monica Rambeau, she felt like a kind and understanding boss. But … in WandaVision episode 5, Hayward feels like a person who could be a danger. He seemed to have had a narrative in his head from the start that Wanda was a terrorist, even though Monica, who had been Wanda’s victim, doubted that. Then it turns out that there is a gun in the drone controlled by Monica, where the existence of the weapon is not even informed to Monica first, and Hayward arbitrarily orders the gun to be fired at Wanda.

Wanda was bullying Hayward in this WandaVision episode 5. However, it is doubtful that it will stop him. It was possible that he would perceive this as a huge threat and ask for a stronger fighting force from the center. In fact, if Westview is successfully attacked and Wanda is suppressed, we suspect that it will only make Wanda mentally depressed, and it could be that the reach of the Westview phenomenon will spread outside. The real world might change its reality like in House of M and Doctor Strange, or other magic figures who have to fix it.

5. Vision Began to Realize Something is Wrong

In WandaVision episode 5, Internet access in Vision’s office helps him find e-mails that look like S.W.O.R.D messages outside of Westview. Vision then resuscitated Norm, his colleague. Norm was panicked, and he asked for help from a woman. Is that woman Wanda? Or another character? Norm doesn’t mention it, which is quite interesting either and adds to the mystery of whether there was a manipulator that influenced Wanda.

Because of that, and Vision himself had already noticed some oddities before this, Vision was angry with his wife, and they had a big fight towards the end of the episode. What caught my attention was that Vision admitted that he couldn’t remember anything about his life outside Westview. Was it Wanda’s influence? We suspect this is because he is the new Vision. Old Vision was completely dead because the Mind Stone was destroyed. So Wanda awakens Vision’s body and makes Vision’s personality as close to what he knows as possible. The dead cannot be returned that easily.

What is clear, outside of Westview, Hayward could be a threat. But in Wanda’s own reality, Vision also seemed unavoidable to his suspicions and could become a threat too.

After the topic of Pietro Maximoff was mentioned by Wanda’s children, Pietro suddenly appeared at the end of the episode. The problem? The actor is not Aaron Johnson. That’s Evan Peters, the X-Men version of Quicksilver. So we are ought to be curious about who is responsible for the appearance of this new Pietro?

Is it Wanda? Wanda’s power, but controlled by her subconscious? Wanda’s children? Or another unknown figure? What is clear, Pietro’s appearance is interesting. Imagine if, for example, after WandaVision ended, this Pietro survived, and it turns out he has superpowers too. So even though the original Pietro Maximoff really died, this new Pietro could be the new Quicksilver too. Another possibility is that Wanda and Pietro’s children will all perish once the reality of WandaVision collapses.

What do you think about the conflicts and twists in this episode? This episode is excellent indeed, there are lots of things to highlight, and we are eager to know more in the upcoming episodes.