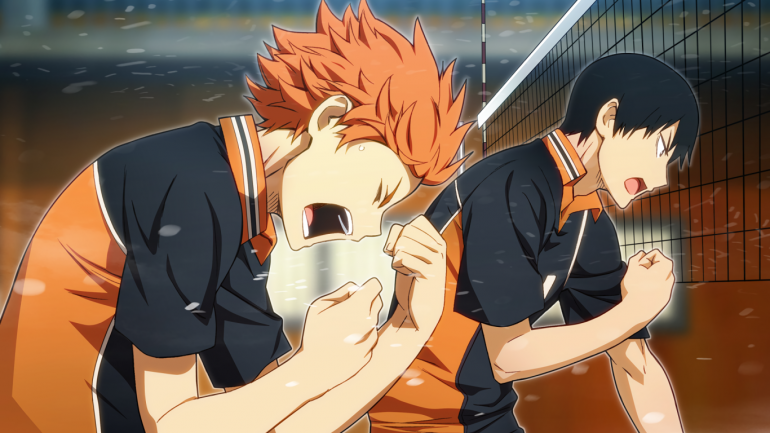 If you think the sports anime genre is dull, then you have never watched a decent sports anime. A good sports anime is a kind of well-written drama, but it includes sports. The characters have to be fascinating with diverse motives and rich histories that make you want to cheer or cheer them up.

The animation must be a number of the easiest to create interesting sports and enjoyable to watch. Every year we are invited to sports anime, but some of us stay in our hearts to feel inspired and to feel good by watching it.

This anime has a distinctive animation style that makes it distinct from the rest of the anime on the list. It remains one of the overlooked works of Masaaki Yuasa, known for creating a decent number of anime like the Tatami Galaxy. The characters are outstanding and love the production of observation. Their discussions are natural and there are a few moments of sarcastic dry humor. The two mates are completely opposite, one being energetic and cocky, while the other is calm and passive. The anime is for real anime fans who don’t have fan service, and you’ll be more interested in table tennis after watching this anime.

Ace of Diamond Eijun Sawamura’s middle school baseball career may not have been a triumph, but he’s certainly had a lot of fun with his teammates. They expect to do better when they reach high school, but Eijun is being scouted by a prestigious private high school to join their baseball team because of his unique pitching style. With the support of his old co-workers, Eijun set out to enter Seidou High School and become a team hero. It won’t be an easy journey, three more first-string pitchers each have the title of an ace in mind, and none of them can give up on their goals. A mediocre high school career, a rare ability that makes up for mediocre shortcomings, a rival in every corner, and an unprecedented desire to be the best? Ace of Diamond protects the whole sporting checklist and does it well. Development I.G has developed the art of sports animation.

we’ve got to give it to anime that deserves a lot of credit, Breakers. What makes Breakers a better recommendation relative to other sports anime you can think of is that we have an anime for para-athletes. The shows are less than ten minutes long, but you get a lot of content when you see young people with physical difficulties working tirelessly to get the most out of what they are. In BREAKERS, you see a character playing wheelchair basketball, you have a visually disabled person playing goalball, and those without limbs participate in track and swimming. Through the beauty of animation, the viewer can see that para-people are much better off than the real thing, as they prove that what they’re doing is much more demanding than the activities they’re doing for able-bodied people.

Haikyu, man! It’s the story of Shouyou Hinata, a boy who’s extremely curious about volleyball. He loves it so much that he managed to bring his club all the way to a regular middle school match, only to get Tobio Kageyama a.k.a. “King of the Game.” To get back to Tobio, Shouyou joined up with the Karasuno High School Volleyball Team to get stronger. At the same time, Tobio signed up for the same thing. It’s with the Free! Haikyu, man! North American enthusiasts have rekindled their interest in anime games. The second season will also be released in October 2015, while the second one (Shousha to Haisha) will be released in September 2015. You will also find out about the 2014 Hop Festa Special as well as the Owari no Hajimari recap movie — all of which I.G Production handles

Considering that rugby doesn’t exist for American audiences, i should conclude that All Out!! It’s one of their only exposures. The series does an outstanding job of teaching its audiences about sport and has a fascinating collection of characters. The most educational part of All Out!! It shows the viewer and its characters that there is a distinction between working hard and working smart. Before Kanagawa High School got a coach, they practiced until they could walk. With the aid of Gion, one of the players, they manage to get a coach and the team discovers that there are more effective ways to train and nurture their talents in order to fulfill their full potential. The best thing that audiences can get from All Out!! It’s why you’re not meant to be afraid to ask for help; if / when you do, it will lead to greater things

One of the forgotten facets of anime is how the format lets artists experiment with time in a way that live-action TV can’t do. Remember in The playground, an iconic 90s movie, when Ham ends an insult conversation with an opponent’s team player by telling him he plays a ball like a girl? Ok, Big 2nd challenges what it’s like to play ball like a kid! What makes Big 2nd a fantastic recommendation is that it contradicts not just the rules on who can play baseball, but Japan’s conventional hierarchy structure when a bunch of ladies button their jerseys and put on some gloves to prove that they can play with boys, not in a league of their own! If present Prime Minister Shinzo Abe still worries about female inclusion, he’d better watch Big 2nd to see how to do it! As insane as it sounds, women are not allowed to be in the area of Koushien, where Japanese teenage baseball players have their world series! We don’t talk about fantasy, but the truth! If women can love watching baseball, why can’t they play?

A lot of anime series deals with the topic of one-on-one fighting, but few do so in a real sporting way. Hajime no Ippo, based on George Morikawa’s manga series, is an exception. Ippo Makunouchi, a high school boy, really can’t stand up for himself, so he’s constantly beaten by bullies. In the wake of one of those attacks, he’s acquainted with a pro boxer who takes him to the gym and is startled when Ippo just throws the holy hell on a punching bag. The series tracks his efforts to learn “sweet science” and to battle multiple enemies along the way. One thing the anime does very well is to bring dimensionality to Ippo’s counterparts in the ring – they all feel like actual people with their own motivations for boxing, not mere caricatures for him to punch

If you’ve not seen the 1983 series, don’t think about it, because the 2018 revival does a fine job of capturing the film for new viewers and long-time fans alike. If you enjoy soccer (okay, football for you non-American readers), then Captain Tsubasa has to be on your list! At just eleven, the titular Tsubasa is motivated to be the strongest to the point that he transfers to a city where he can develop his abilities. There, he meets friends and foes with the same dream of one day playing for Japan’s national soccer team. Captain Tsubasa will teach his audience, particularly those who have children, to know when to nurture the talents and passions of your children. If you let them follow their own interests, they will understand the importance of hard work and teamwork. Are they going to play in the World Cup? It’s not for us to say so, but we’re sure that the lessons they learn on the field will be transferred to adulthood, so it’s best to inspire children to take part in any sport as soon as possible,

Looked at as the best basketball anime out there, this anime can be considered one of the best sports anime in general. It’s a classic anime that’s already been at the forefront in terms of manga and has one of the best-selling mangas ever. A naturally talented boy named Hanamichi Sakuragi, who is a gang boss with no luck in dating, finds himself in a school basketball club to impress Haruko Akagi. It ran for a total of 101 episodes and is full of basketball play, passion, and cutting-edge comedy chops that even the average anime fan is going to indulge in.

Hinomaruzumo, foreign viewers will hear that sumo is still playing at the high school level, and it is through this rivalry that Hinomaru Ushio aims to become a sumo wrestler. Being as tall as Muggsy Bogues, Hinomaru doesn’t meet the pro sumo height criteria, so he’s ineligible to play. However, there are no such conditions for high school sumo, and if he can win high school, he will be eligible to play like a pro. Via Hinomaru’s passion for sumo, he draws other characters to solidify the sumo squad of his high school. He hires a Karate Black Belt Delinquent, an aspiring amateur wrestler, and a slim kid who wants to be tough. Together with their captain Ozeki, they test themselves through fierce rivalry. While combat sports like sumo are one-on-one, through Hinomaruzumo, the audience can learn that it’s still a team effort when it’s thanks to the help of your trainers and sparring partners that you can compete in that ring.

Go-kart racing is officially a competition, and unlike much other auto-themed anime series, Capeta leans heavily on the rules. The show begins with Kappeita Taira’s dad, ten years old, building him a kart of scrap material from his job at a pavement firm. In his first run, Capeta manages to almost overcome a young pro who awakens the spirit of rivalry in both children that will continue into adulthood. The anime really captures the grind of racing – how drivers need to practice their reflexes, and how things can go easily and terribly wrong on the track. It’s also expertly paced, combining the excitement of rivalry with the peaceful moments between Capeta and his father as they follow their dreams.

One of the most lauded anime series of any genre in the last few years, Yuri On Ice focuses on a much-maligned subject — competition skating — and uses it to create a rich and resonant tale of mentorship, romance, and discipline. As Yuri Katsuki, a talented Japanese figure skater experiences the worst defeat of his career, he returns to his hometown uncertain whether he will ever compete again. That all changes when his idol, Russian skater Victor Nikiforov, takes an interest in him and offers to take him to the top. The relationship between the two men has been teased with incredible narrative delicacy. Don’t make a mistake: this is the story of two men falling in love with the sport as the means of their relationship. Skating is the way characters interact, convey their feelings, and cope with the world. This is quite the feat.

This anime is based on football, produced by the creator of another hit manga named Captain Tsubasa, one of the best-selling manga ever. Anime features on Kanō Kyōsuke, a female high school student who had just moved to Jyoyō Orange High School. Kyōsuke’s older brother is the illustrious and most famous A.C. Milan soccer, the player. The anime has a total of 52 episodes that keep you amused, including this underrated anime that has long been under the radar. Every episode deals with the different problems of the football team, their practices, their victories, their defeats, and many others.

As you can see from the “pedal” in the title, this sporting anime focuses on biking. The main character, Sakamichi Onoda, is an otaku who wants to make friends. The school anime club dissolved, however, so that he had to settle for the bike racing club. The cast of characters is a friendly collective with a lead character who is not necessarily your usual sports anime protagonist. Not only are the heroes great, but the villains are unforgettable.